We saw some storms develop in yesterday’s heat and humidity, just the beginning of an unsettled weather pattern that will last all the way into early next week. The heftiest storms stayed just to our west — flash flooding prompted numerous road closures and water rescues around the Triad yesterday evening.

Higher storm chances will kick in over central North Carolina today, but we’ll stay dry through early afternoon. That gives us plenty of time for temperatures to heat up to the upper 80s and low 90s: 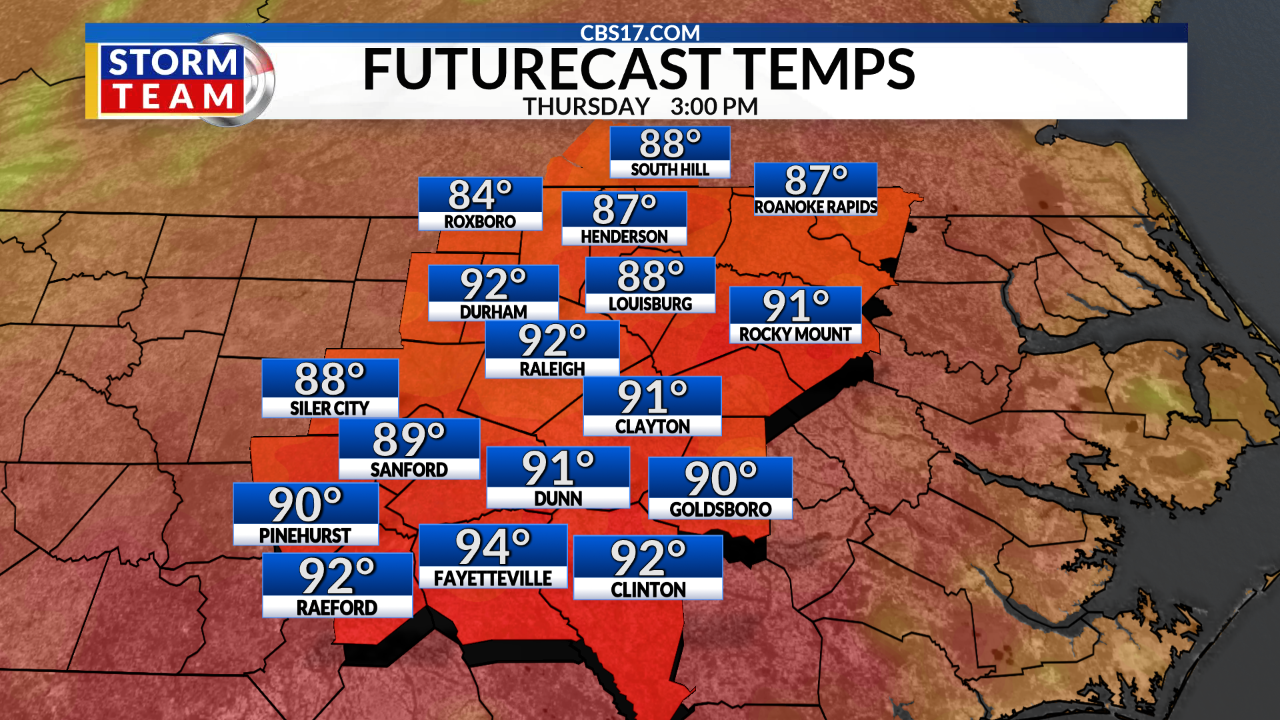 The best chance of storms will shape up from late afternoon through this evening, and even into early overnight: 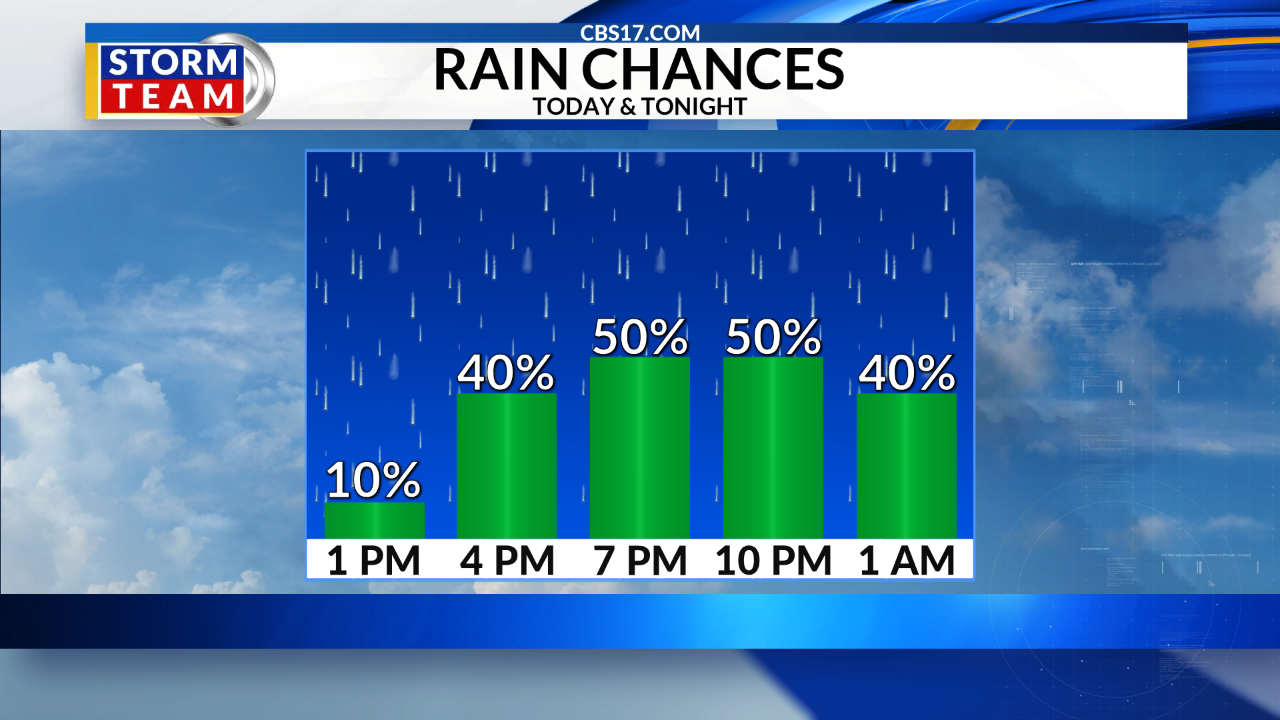 The North American Model’s radar simulation from noon today through 6:00am Friday shows the storms persisting well after sunset, finally quieting down after midnight:

Get used to the same pattern for the next several days: quiet in the morning, warm and muggy by early afternoon, then a good chance of scattered showers and storms. Temperatures won’t be quite as hot tomorrow, thanks to lingering clouds in the morning: 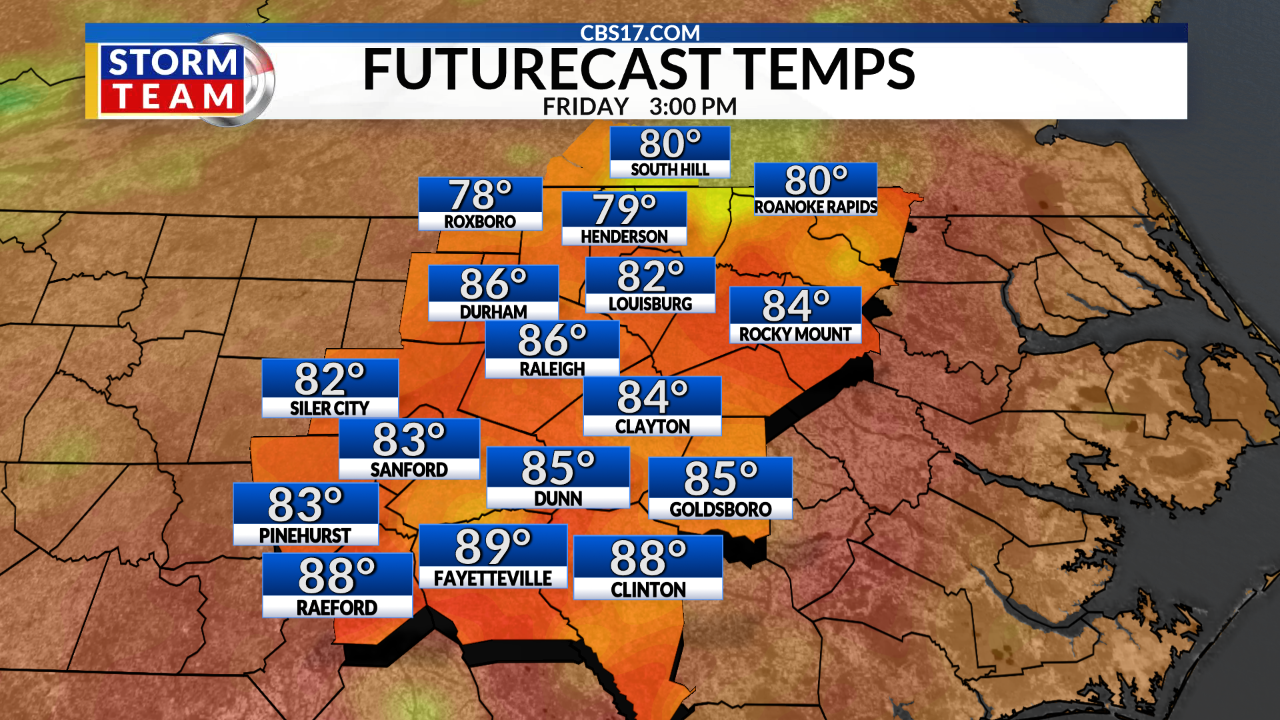 The NAM simulation from noon tomorrow through 6:00am Saturday shows more-widespread showers and storms:

Our severe potential will remain low, but we’ll keep a close eye on the radar just in case. Like in the Triad yesterday, the potential for localized flooding is a greater concern than any severe wind or hail threat. With 2″+ rainfall expected across most of central North Carolina over the next week, it’s a threat we’ll have to monitor every day: 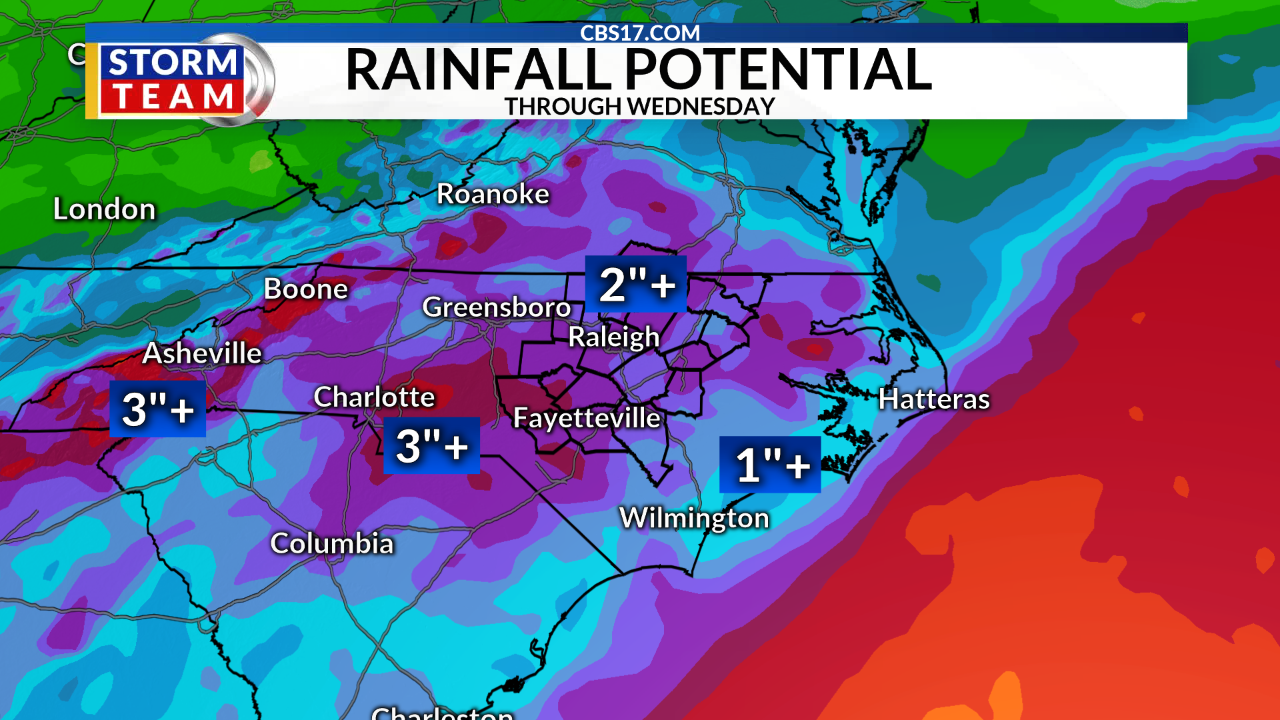 More of the same on Saturday, then our storm chances dip just a bit on Sunday: 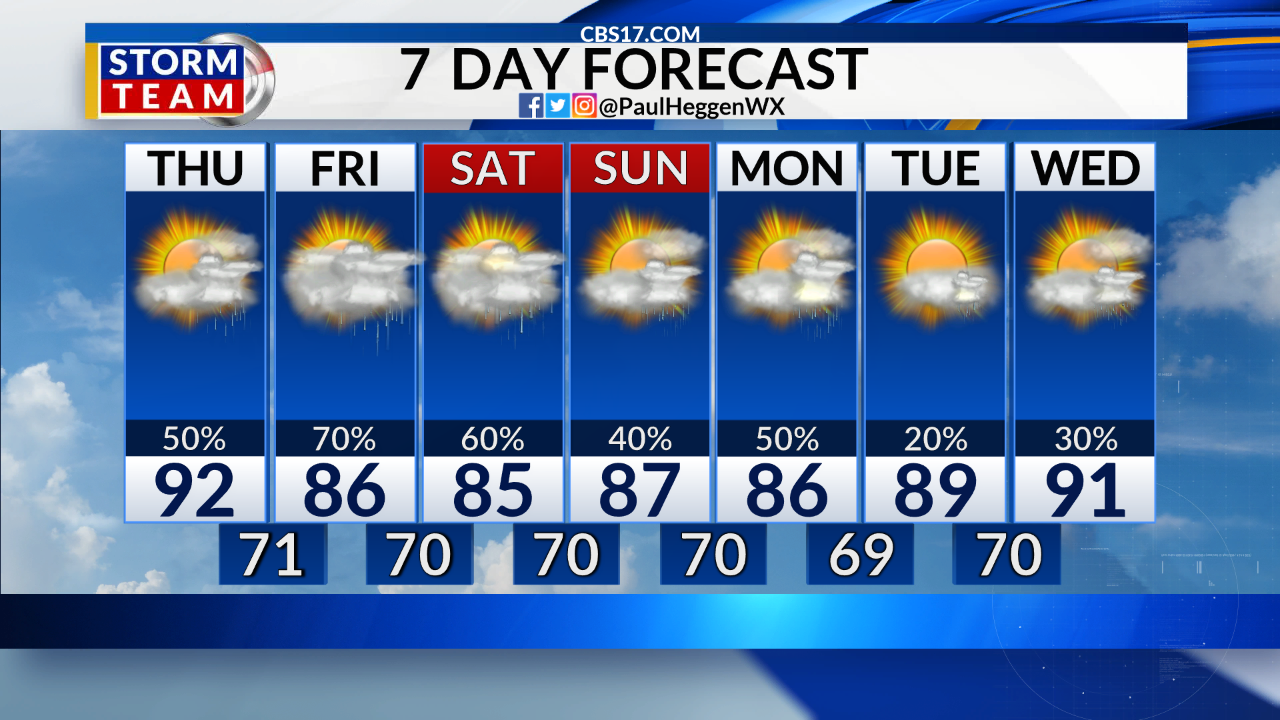 You should still be flexible with outdoor plans throughout the weekend — have an indoor alternative in mind if Mother Nature forces you to adjust. Our rain chances dip a bit by Tuesday and Wednesday, which will just allow temperatures to heat back up to around 90°.

Time for a tropical update! Not much change to the system we’ve been tracking as it moves from the Caribbean into the southwestern Atlantic. It’s still disorganized, it still has just a 10% of becoming a tropical depression, and it’s still forecast to run parallel to the southeastern U.S. coast: 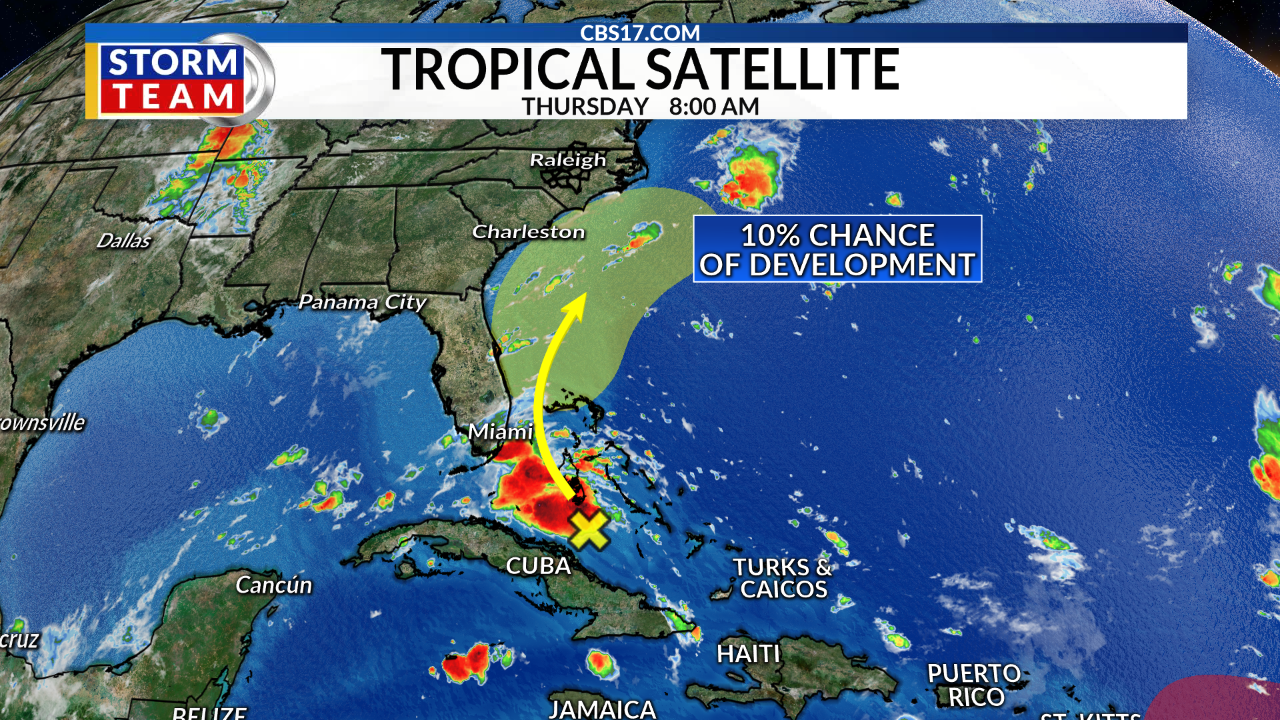 The European forecast model’s ensemble (the same model run dozens of times with slightly different conditions) shows a similar number, in the 5-10% range:

That system, regardless of how organized it is, will feed some moisture up towards us, helping to feed our higher storm chances the next few days.

The other tropical system is much farther out in the Atlantic, but it has a much better chance of getting its act together over the next few days. The National Hurricane Center estimates a 70% chance that it becomes at least a tropical depression: 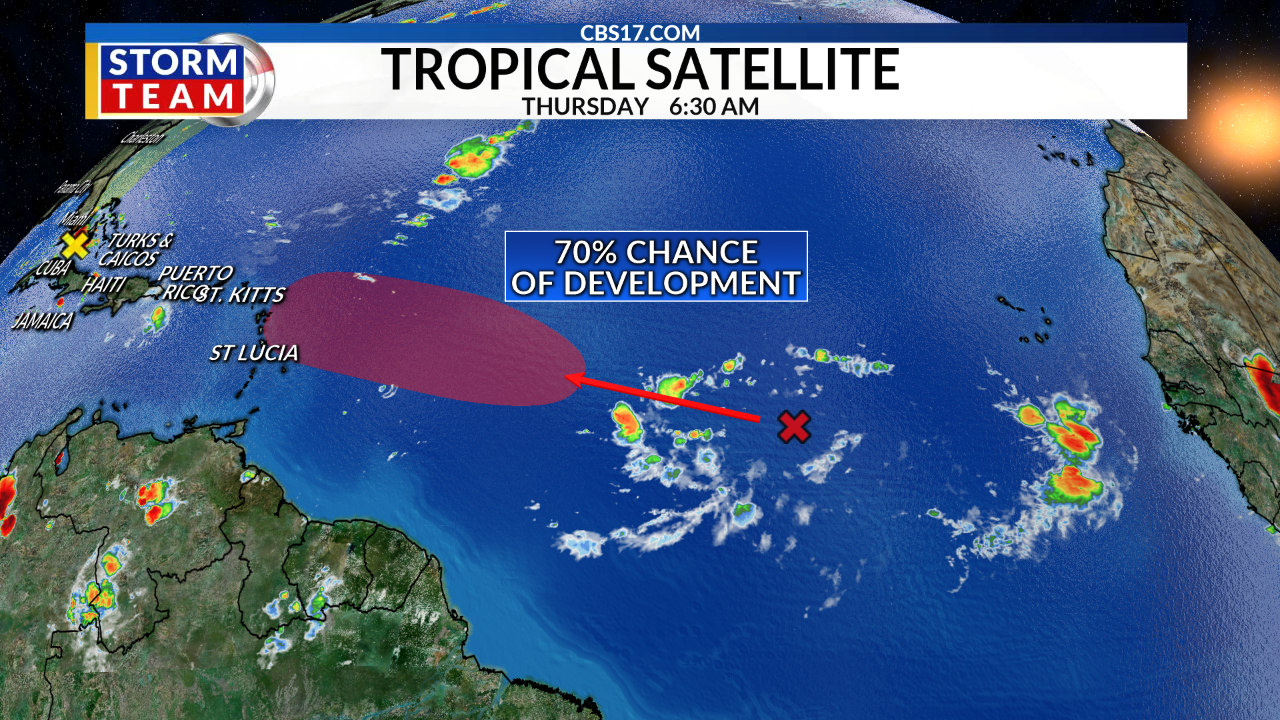 The European ensemble is on the same page again, showing an 80-85% chance a depression forms by early next week:

But that’s slightly lower than the same model’s estimate at this time yesterday. And the model’s odds that a tropical storm will form have dropped even more, to the 35% range:

There are a LOT of factors at play here…the amount of Saharan dust in the area, the volume of dry air being sucked into the system, the strength of the upper level winds in its path, and the influence of surrounding weather systems (especially to the north). I’d call it a coin flip as to whether we’re talking about Tropical Storm Chantal next week. Even if does become a stronger storm, every individual member of the ensemble curves it away from the U.S. coast late next week. This is the latest “spaghettios” plot showing that curve:

We’ll obviously keep a close eye on it over the next several days. If nothing else, it’s a good reminder that we’re heading toward the peak of hurricane season over the next six weeks!

(CNN) - The robots are coming for Punxsutawney Phil’s job, too.

People for the Ethical Treatment of Animals is calling on the keepers of the weather-forecasting groundhog to let him retire — and to be replaced by an animatronic groundhog.

More Americans went to the library than the movies in 2019

Woman seeks pardon for role in string of killings in 1950s