The new work week is starting off dry, but hot. High temperatures this afternoon will be just a degree or two above normal: 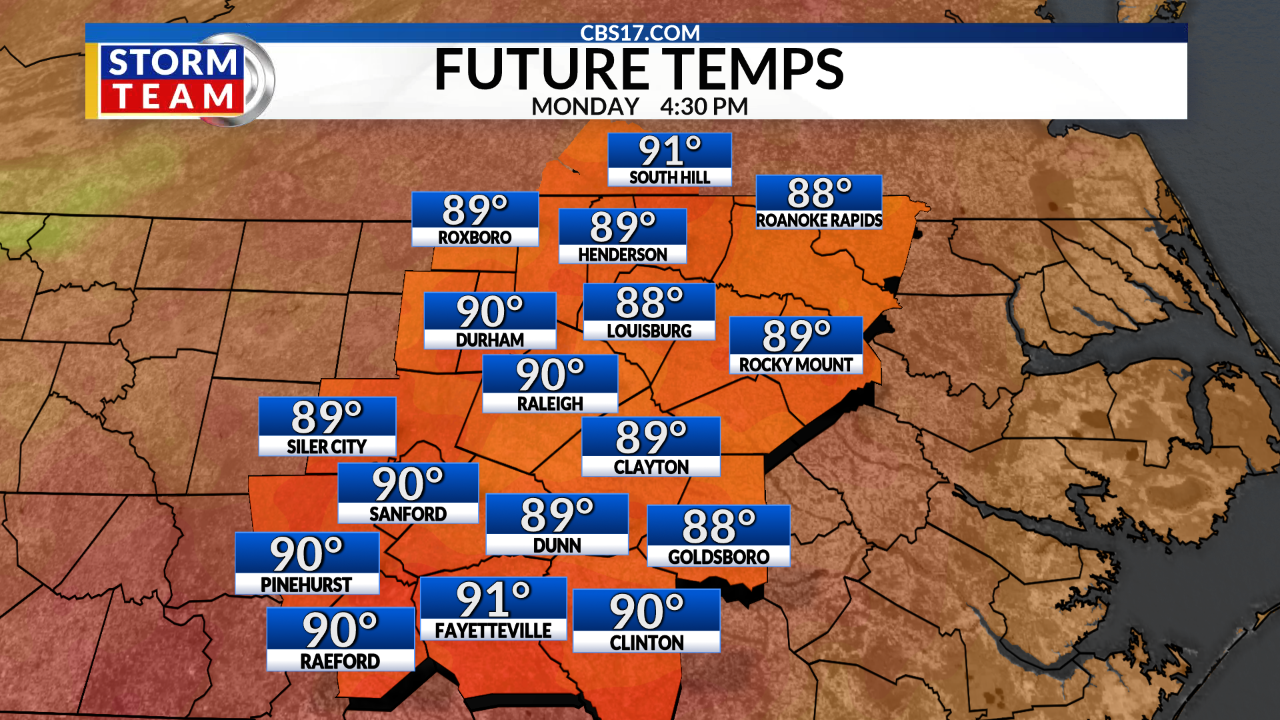 The humidity will be noticeable, but “tolerable” for one more day — for the rest of the week, the Muggy Meter will be stuck on “gross”: 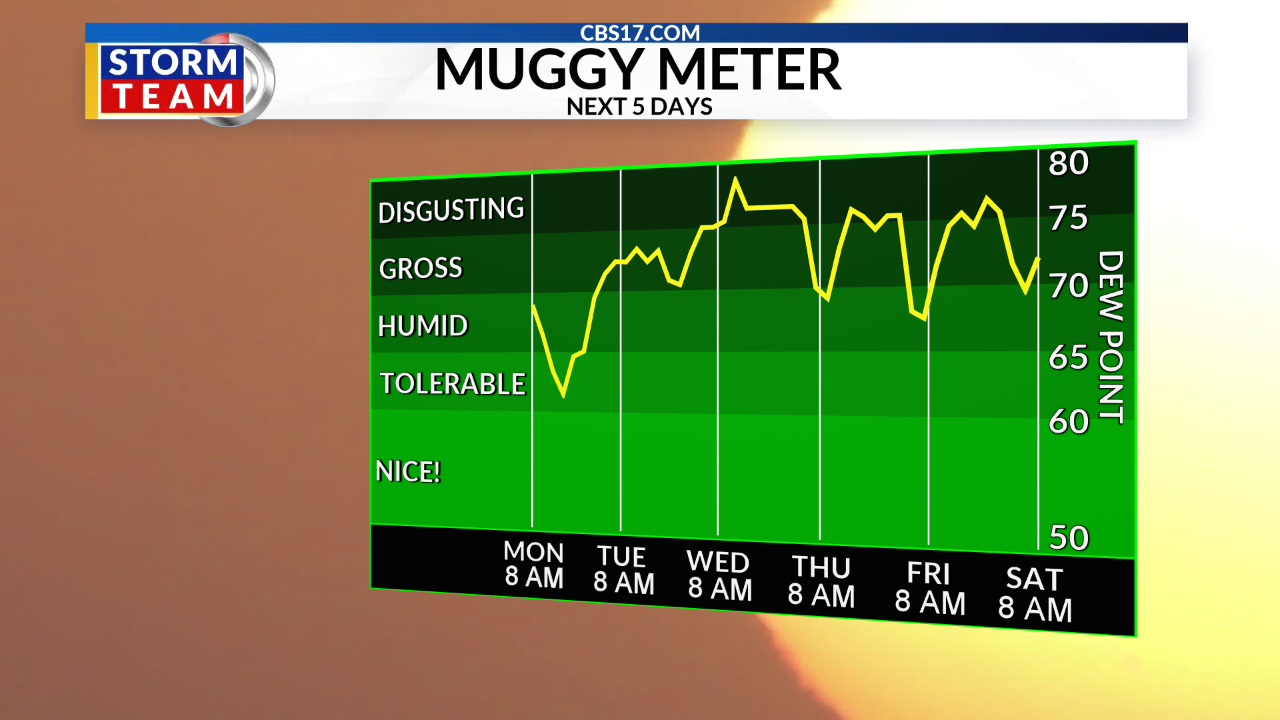 We’ll see a few fair-weather clouds today and tonight, but visibility conditions look decent if you want to catch a glimpse of the peak of the Perseid meteor shower…you’ll just have to stay up late or get up really early to do so: 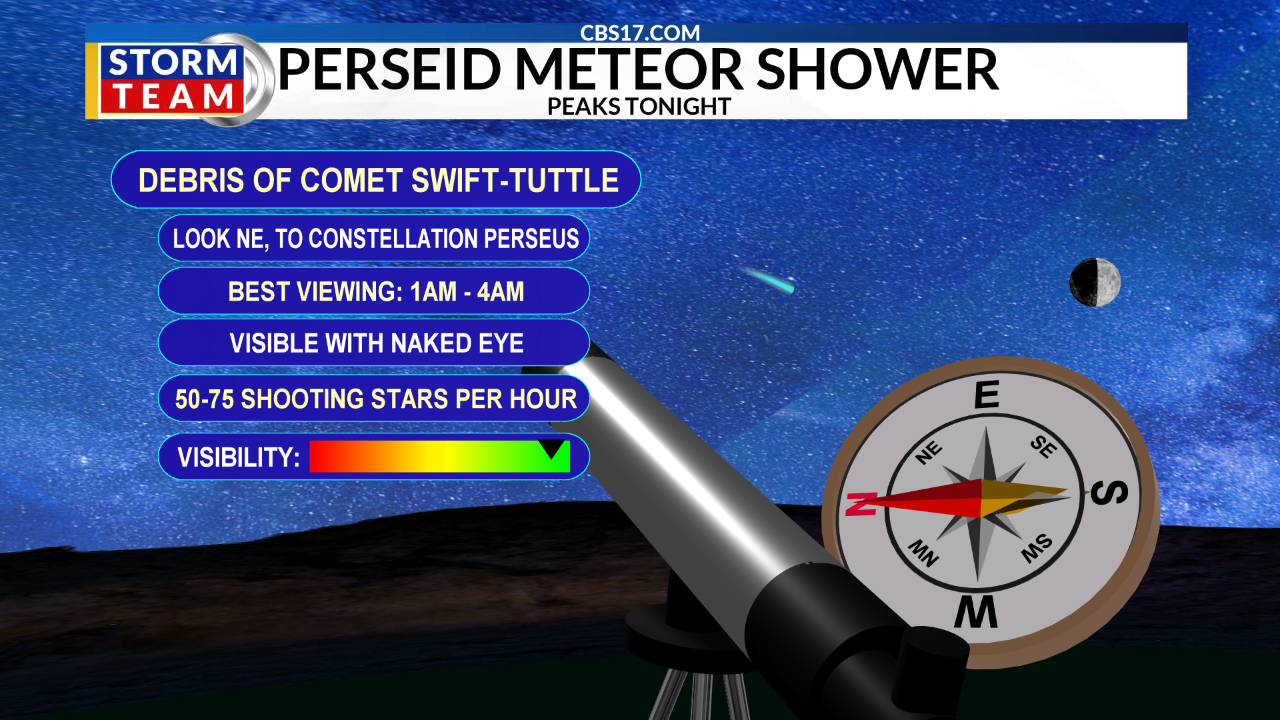 Temperatures tonight will be a little warmer, only dropping to the low 70s in most spots: 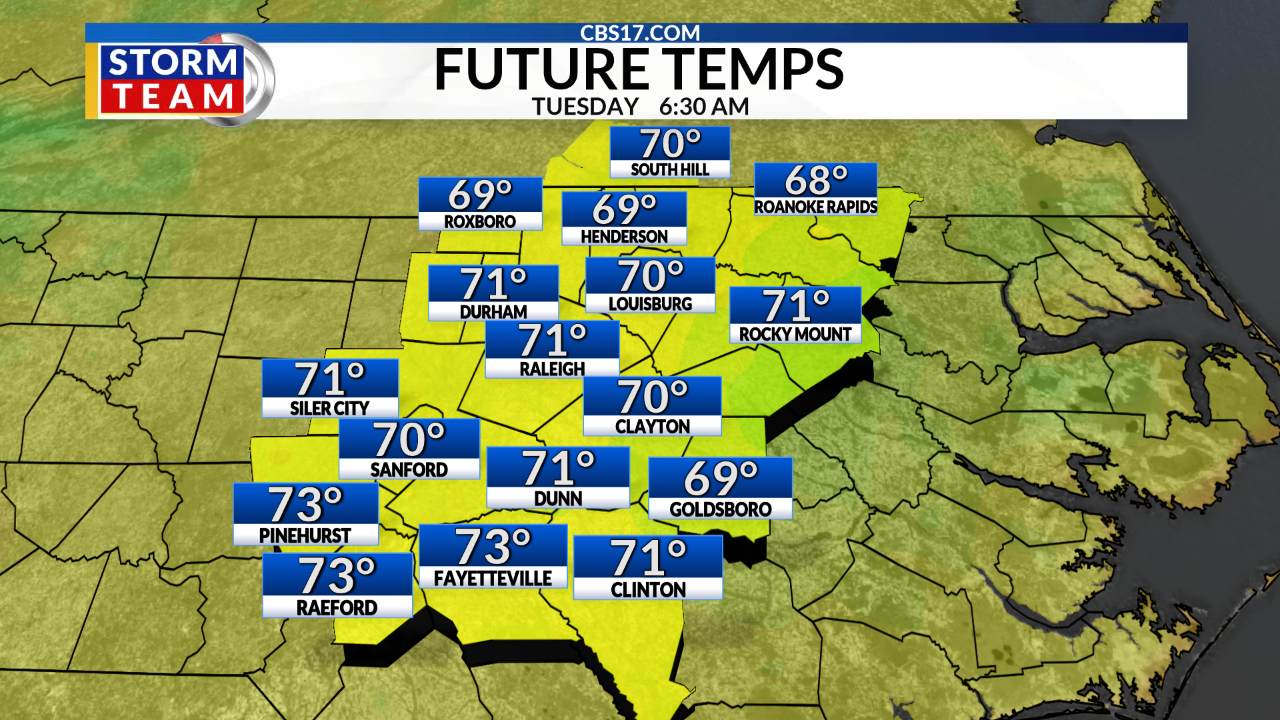 We’ll heat up quickly on Tuesday, with highs reaching the low to mid 90s: 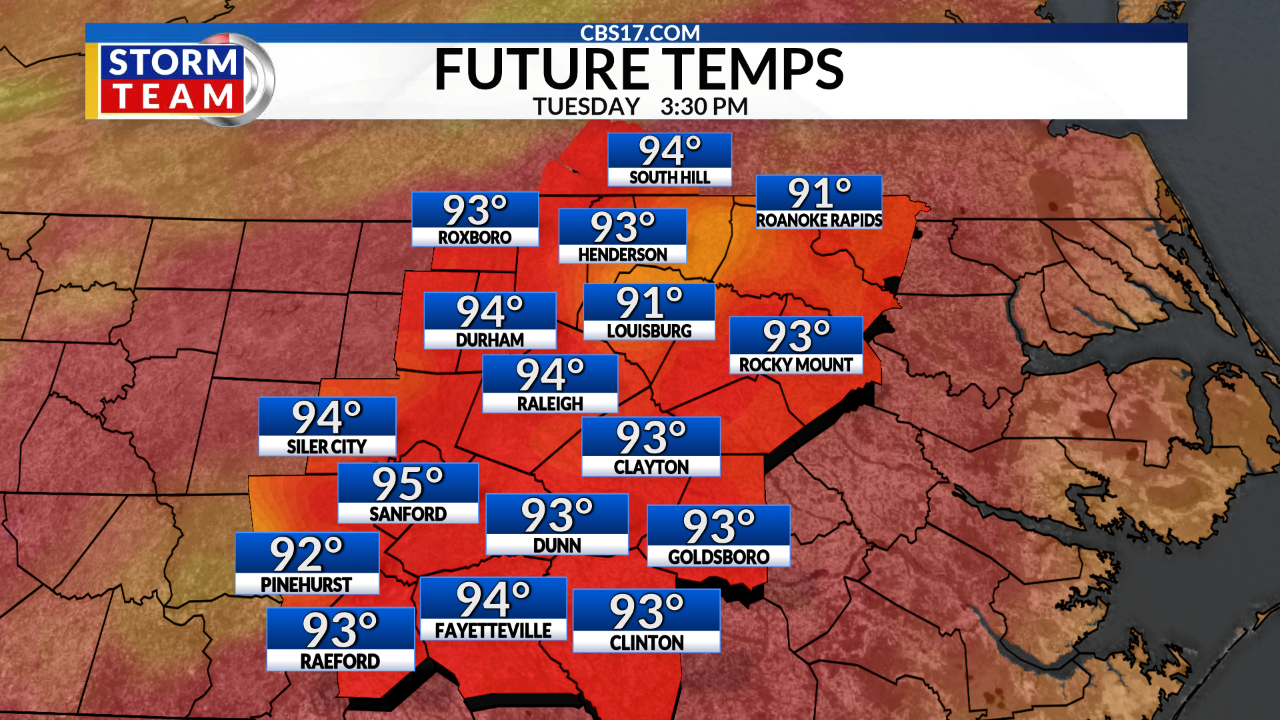 Factor in the increasing humidity, and the heat index is likely to hit triple-digit territory: 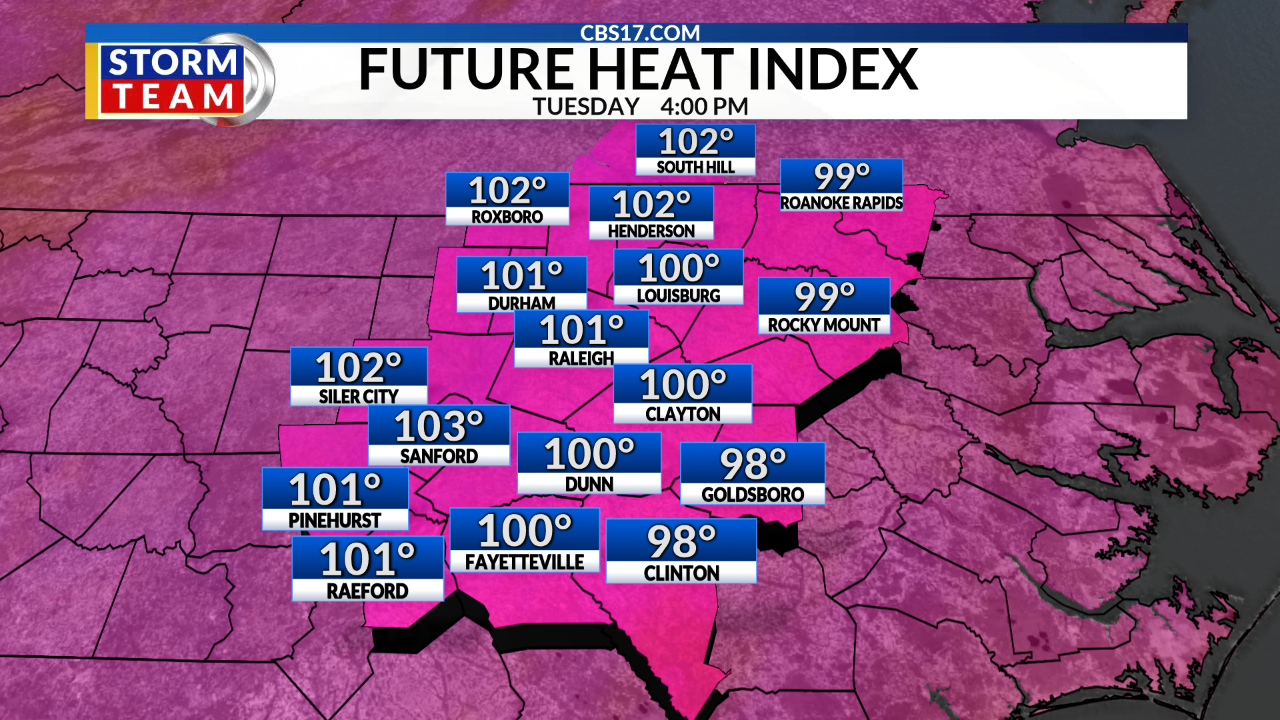 We’ll see just a slight chance of a pop-up storm or two during the day tomorrow. The North American Model’s radar simulation from noon Tuesday through 6:00am Wednesday shows a few radar freckles, then a decaying batch of storms trying to move in overnight:

The Storm Prediction Center thinks those storms could move in a little faster, which increases the odds that they’ll be a little stronger. The greatest severe threat will stay well off to our north, but the SPC has included our northern counties in a “Marginal Risk” (level 1 of 5) of severe weather: 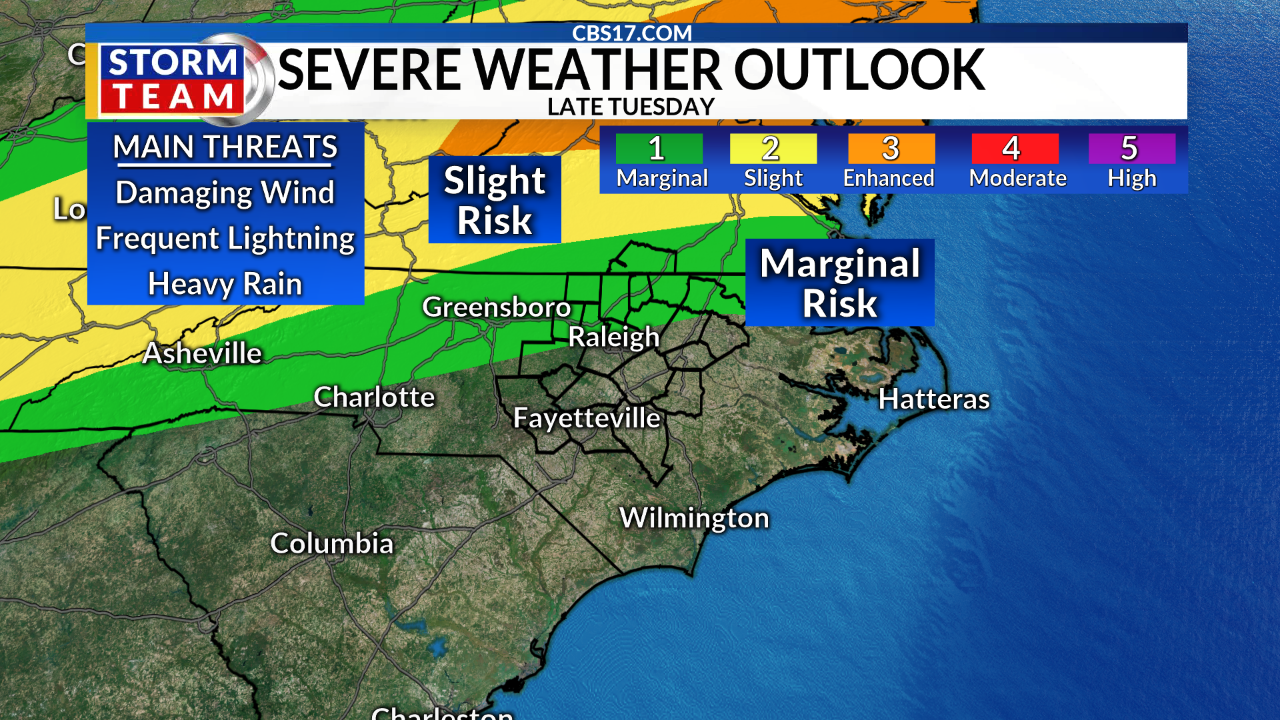 The trigger for that storm chance is a cold front that will grind to a halt as it approaches central North Carolina. So while that front isn’t likely to bring us much relief from the steamy conditions, it will be close enough to enhance our storm chances Wednesday and Thursday. The European forecast model’s simulation from 6:00am Wednesday through 2:00pm Thursday shows a good chance of showers and storms area-wide on Wednesday, with the best chance Thursday to the east and south of the Triangle:

The Storm Prediction Center kept Wednesday’s Marginal Risk area farther off to our south, but I think that’s going to have to be adjusted northward, to include much of central North Carolina: 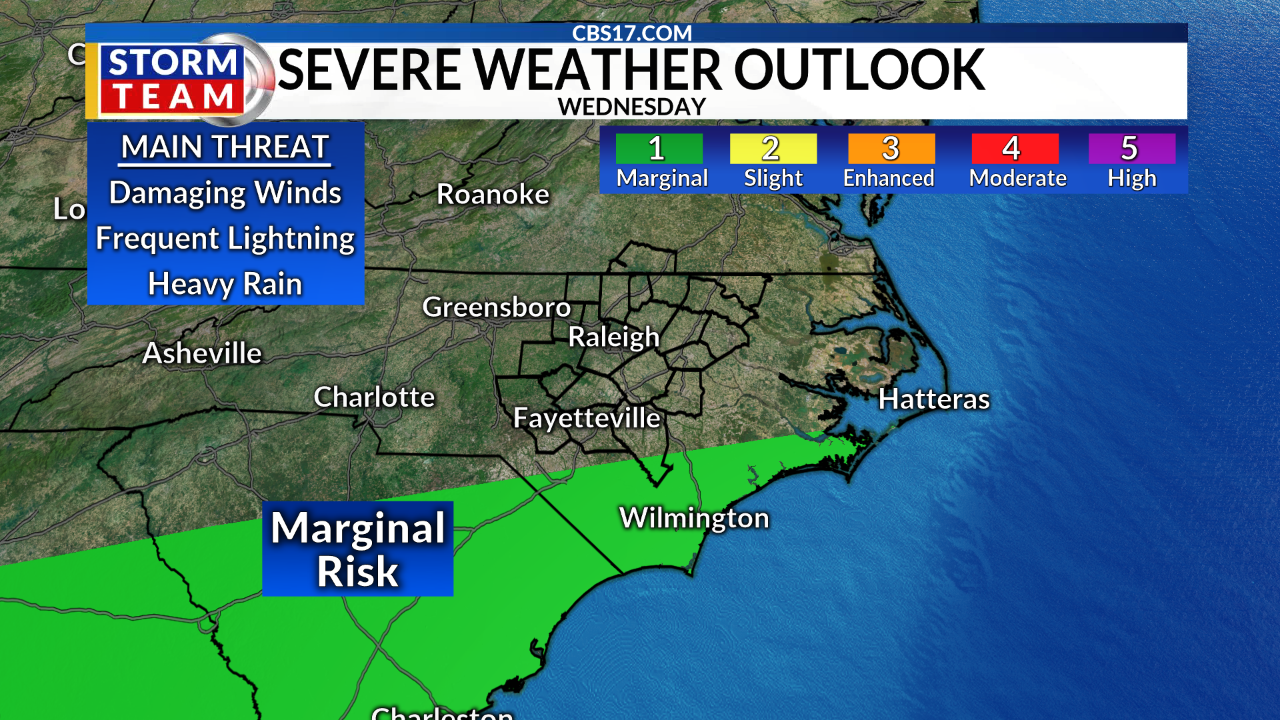 The upper-level winds don’t look favorable enough to boost the risk past the Marginal category, but a few storms could be strong enough to produce some damaging wind gusts. The SPC’s own forecast model shows a 10-20% chance of those storms by late Wednesday afternoon:

It’s not an off-the-charts threat at all, but it is something we’ll keep an eye on over the next 48 hours.

The dying cold front will pretty much get stuck in our neck of the woods through the weekend. Right now it looks like the best chance of storms will remain south of the Triangle, so the daily rain chance map will look like this from Friday through Sunday: 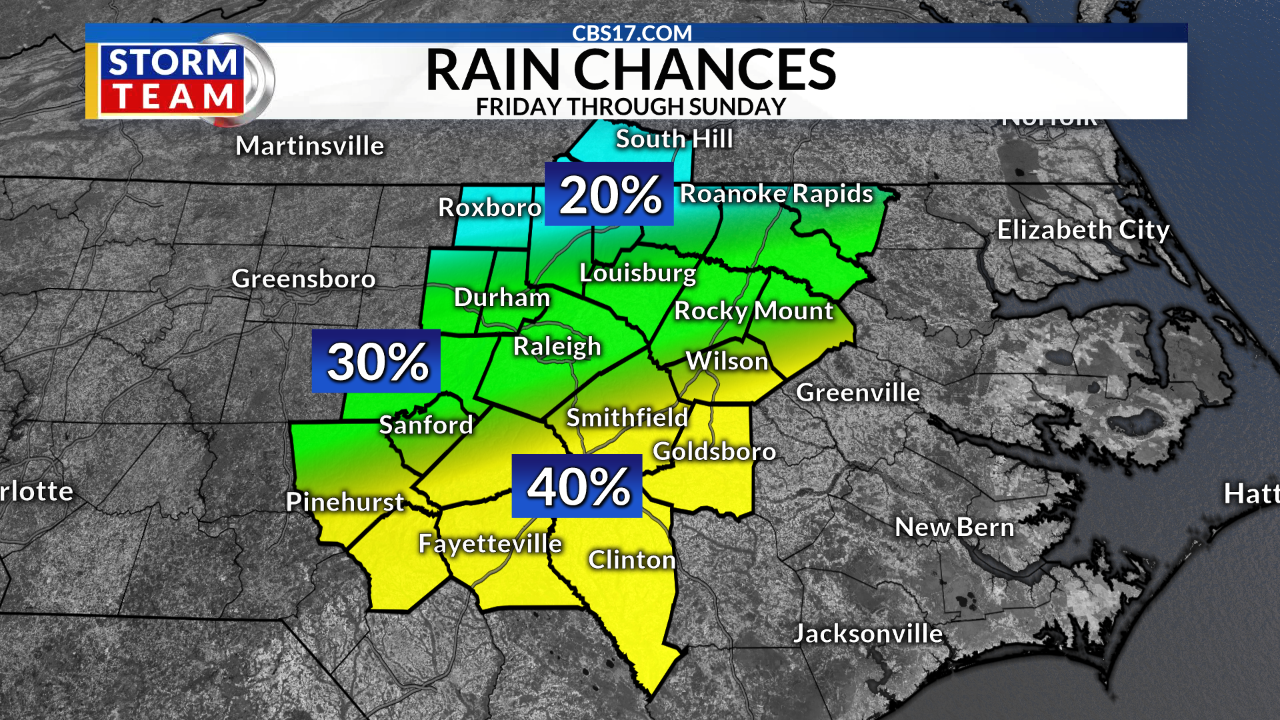 Just be flexible with any outdoor plans, and have an indoor “just in case” alternative in mind. After Wednesday, the lingering rain chances will drop temperatures back to “normal” for mid-August, upper 80s each afternoon in between the spotty storms: 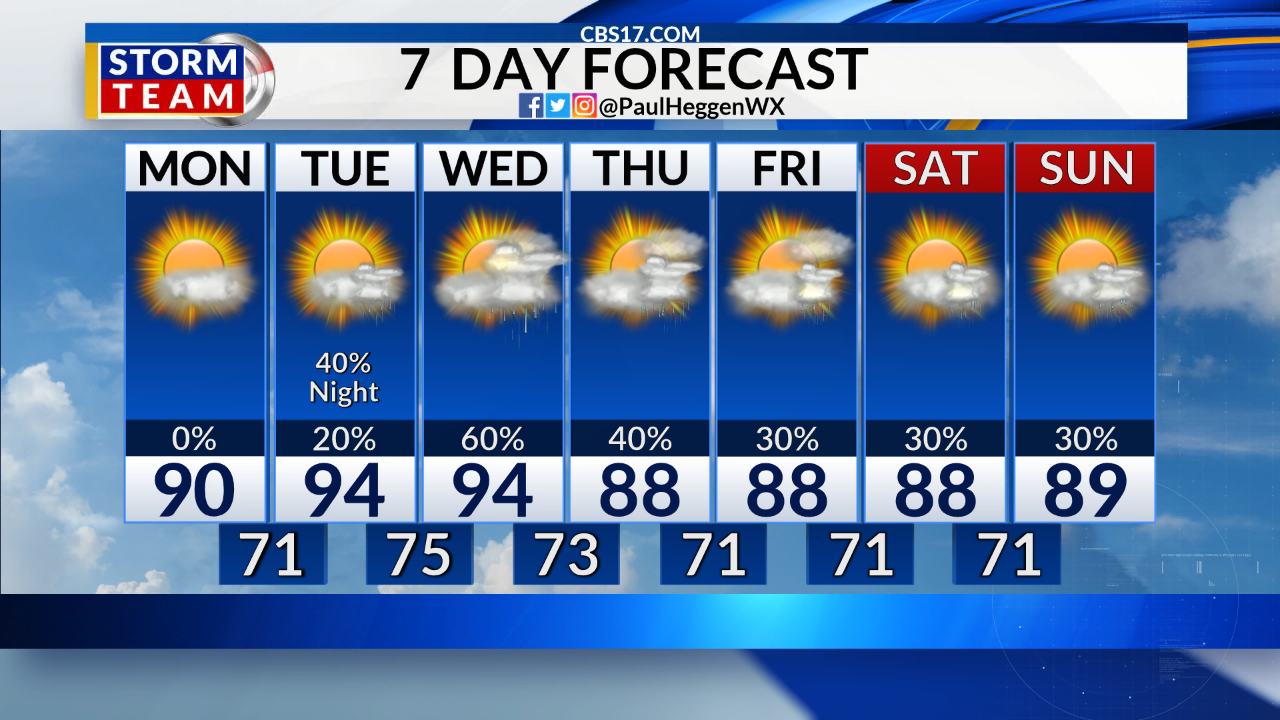 The warning, which was issued just before 7:10 p.m., lasted until 7:30 p.m. A severe thunderstorm capable of producing a tornado was spotted near Norlina, which is about 7 miles north of Warrenton. It was moving northwest at 20 mph.

The weather system became already the second named tropical storm of the season around 8 a.m. Wednesday when it was approximately 30 miles east-southeast of Charleston, South Carolina.

SMITHFIELD, N.C. (WNCN) - The National Weather Service issued a flood warning for Smithfield starting Wednesday afternoon and lasting until further notice, according to a notice on Monday.

As of 9:15 p.m. Monday, the Neuse River in Smithfield was measured at 14.1 feet. Flood stage is 15 feet. The National Weather Service forecasts minor flooding, it said.

Victims of robbery, a Fort Bragg soldier and his roommate seek justice

Soldier stops active shooter by striking him with vehicle

US deaths from coronavirus surpass 100,000 milestone

Raleigh 7-year-old puts on prom for his graduating babysitter

Why Triangle residents may be seeing more snakes in their neighborhoods