It seems like this has been an awfully active summer for severe weather in central North Carolina, and more severe storms are in the forecast late today. Before those storms develop, today’s other big story is the oppressive heat and humidity. High temperatures will reach well into the 90s this afternoon: 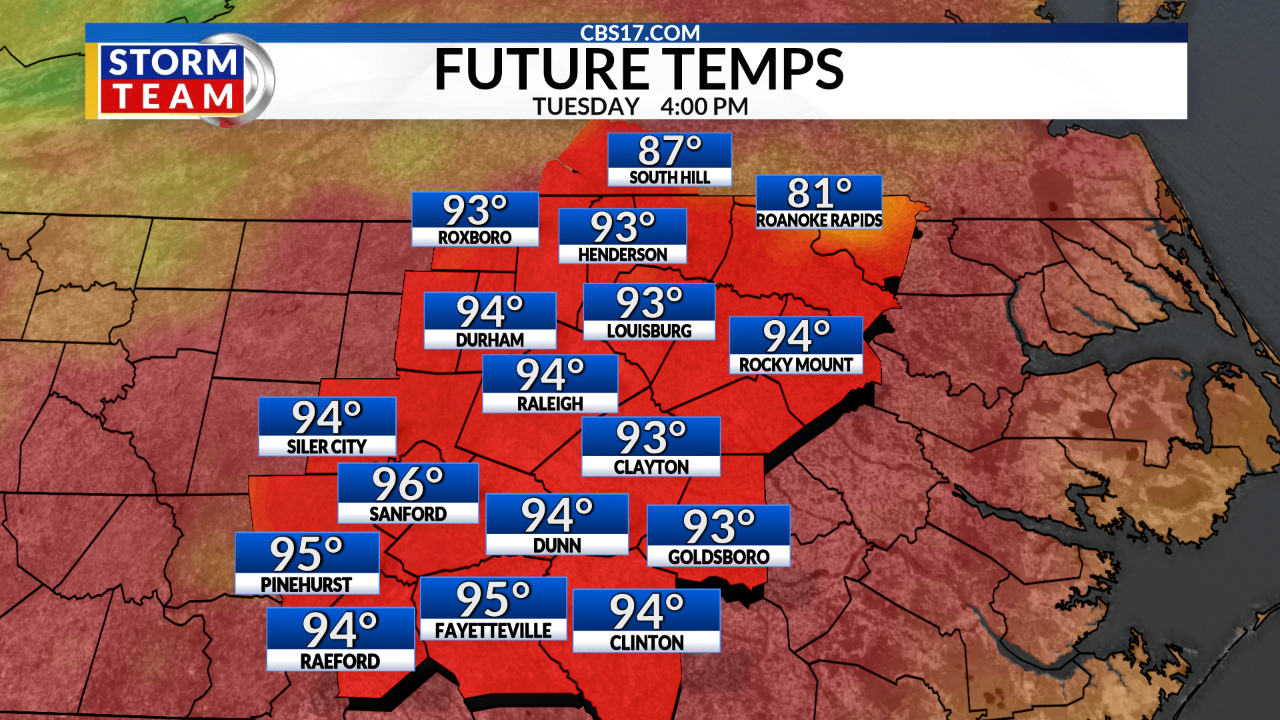 Dew points will be in the low 70s all day, which is flat-out gross: 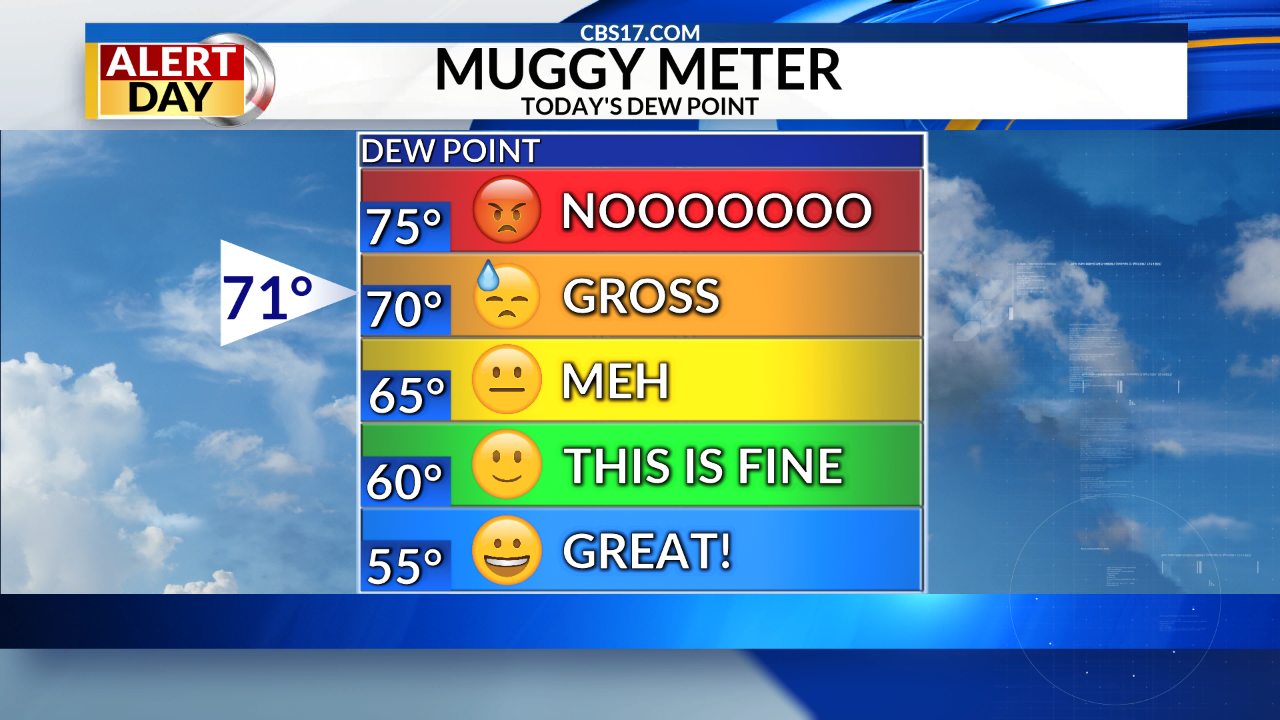 That humidity will push the heat index into triple digit territory — not quite high enough for a Heat Advisory, but still potentially dangerous: 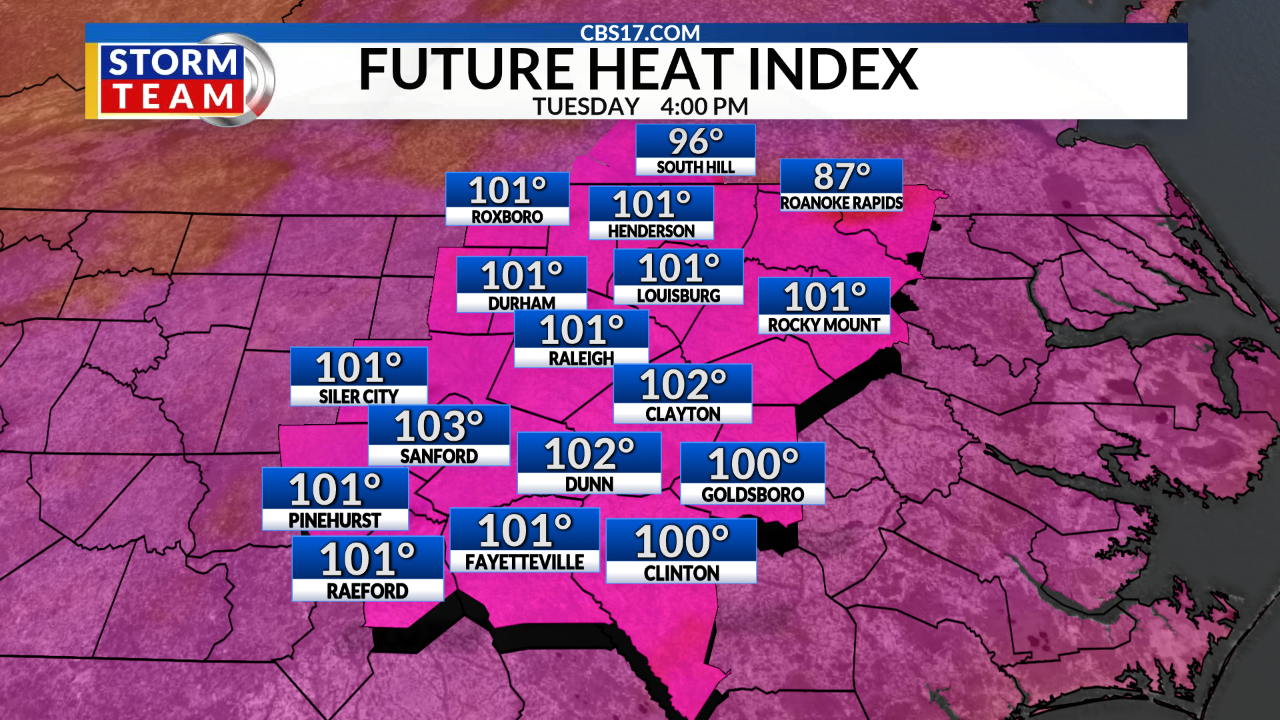 An isolated storm could pop at any point this afternoon, but the threat of more-widespread and stronger storms will hold off until late this afternoon and this evening: 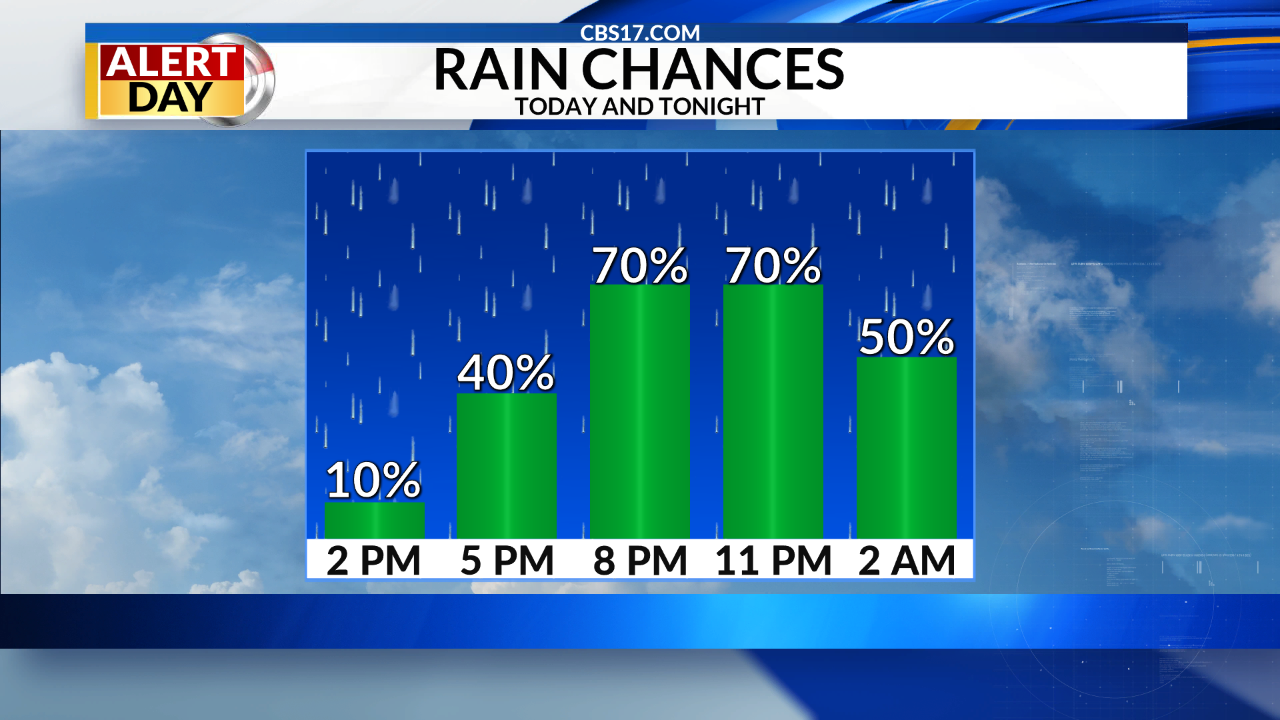 The HRRR model’s radar simulation from noon today through 6:00am tomorrow shows widespread storms along the Virginia state line by early evening, progressing steadily southward later this evening and well into tonight:

Keep in mind, that’s one version of one forecast model — those models are guidance, not gospel. They give us a good idea of the overall pattern, but the atmosphere will do what it wants. That means the storms could be a little faster or slower to develop, a little faster or slower to move, a bit farther north or south…you get the idea. Because we’re going to build up so much heat during the day, the atmosphere will still support the possibility of severe storms even after the sun goes down. The Storm Prediction Center’s outlook indicates an elevated severe weather threat — a “Slight Risk” (level 2 of 5) for almost all of central North Carolina: 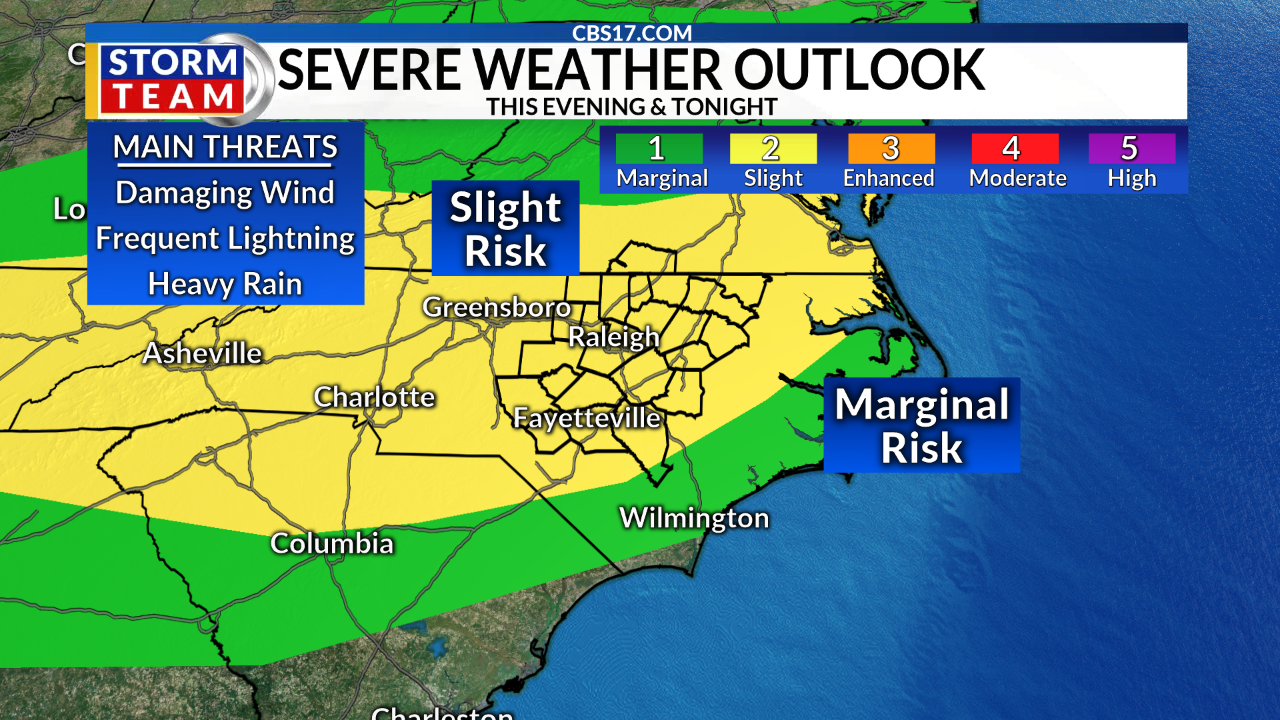 Damaging winds will be the primary threat from any severe storms, but every storm will be capable of producing frequent cloud-to-ground lightning and some heavy downpours: 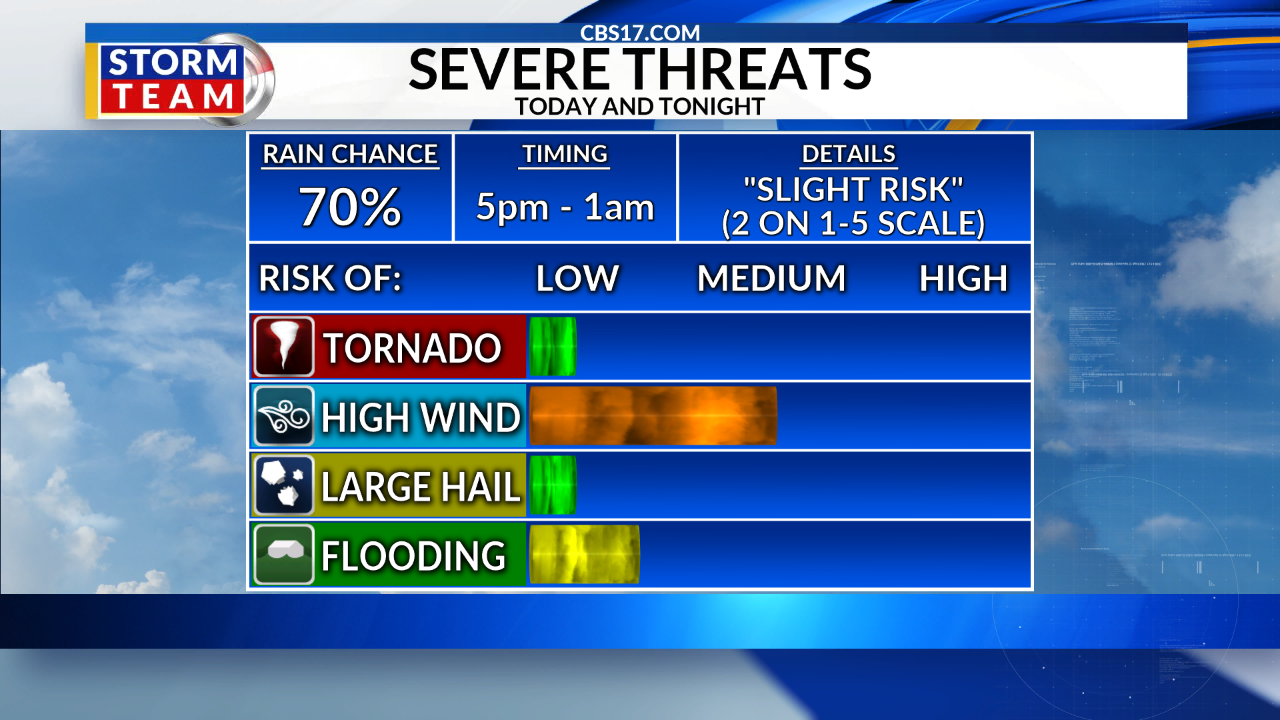 The hail and tornado threats won’t be zero, but they aren’t the main risks this time around. Have a source of weather information handy in case some warnings are issued, and just generally stay weather-aware.

The storms will diminish by early Wednesday morning, and a break from the rain will allow the August sunshine to peek through and warm us up again: 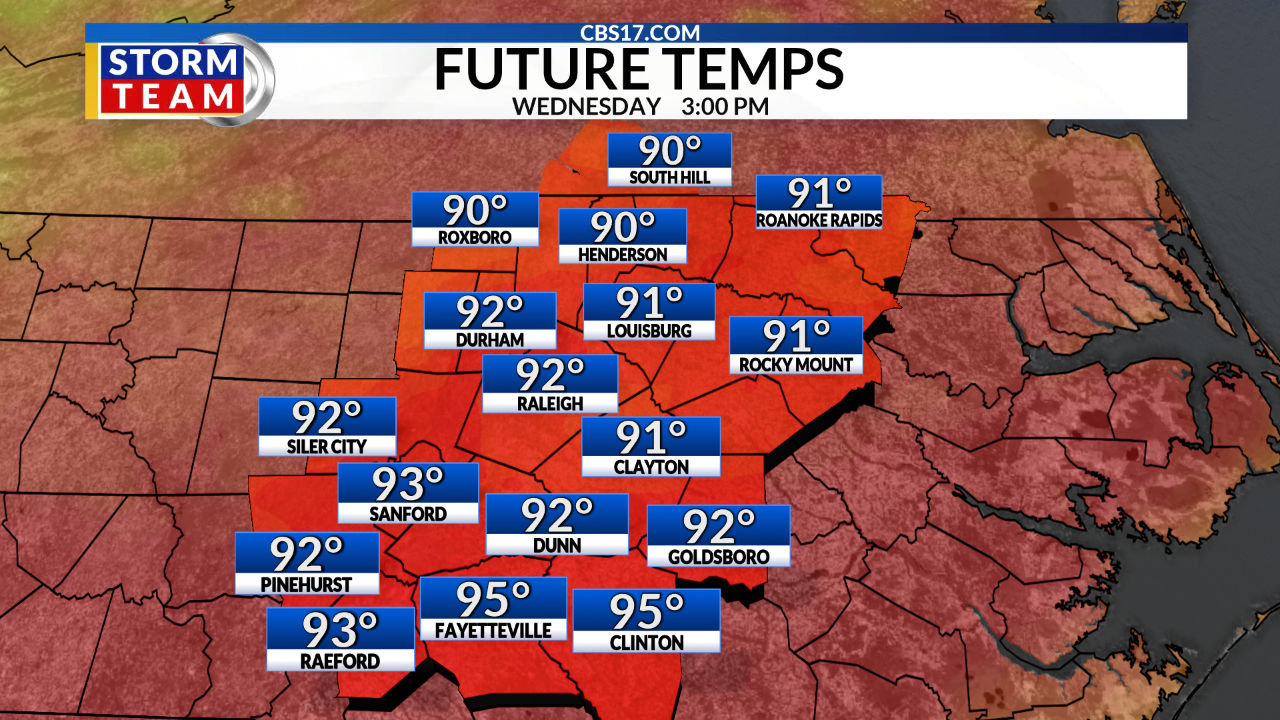 That will re-charge the atmosphere for another round of storms, especially from the Triangle to the east and south. Wednesday’s North American Model simulation from noon through midnight shows widespread storms developing again:

But not all of the model guidance is convinced that those storms will fire up again. The behavior of tomorrow’s storms depends in large part on the behavior of tonight’s storms, which leaves tomorrow’s forecast with a high degree of uncertainty. The severe threat looks much lower either way — a Marginal Risk (the SPC’s lowest category) along and east of I-95: 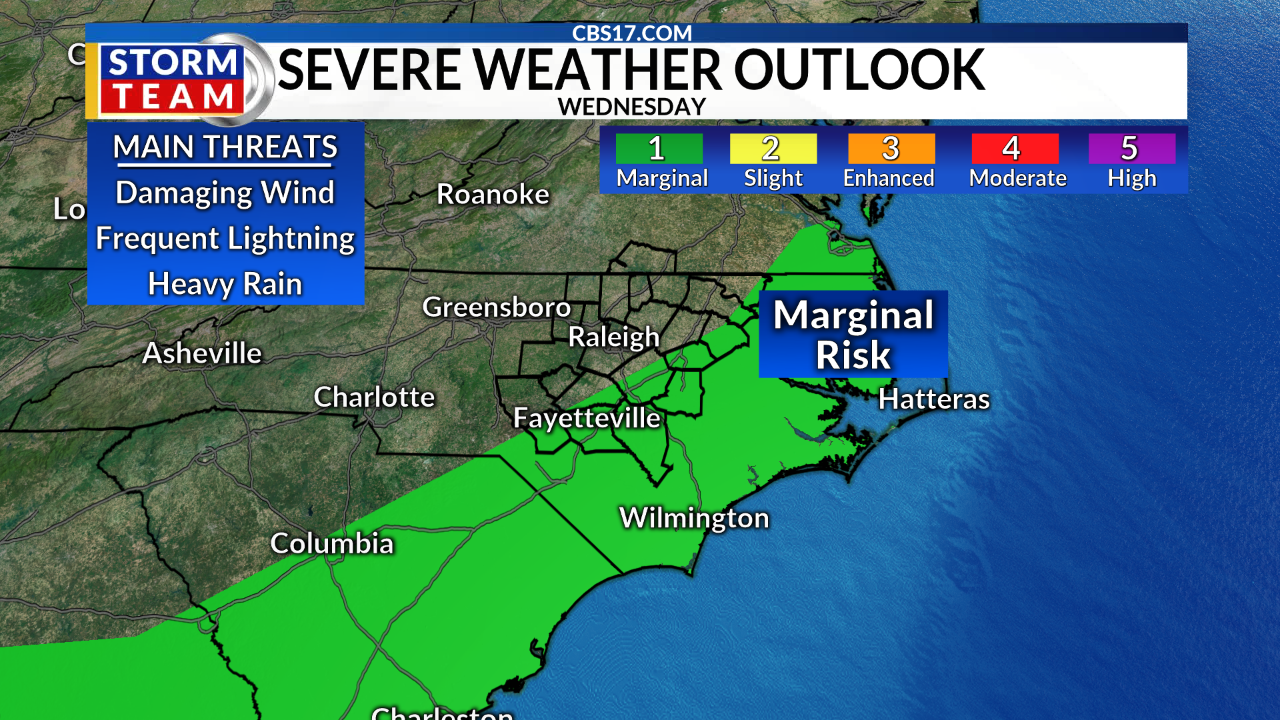 The decaying cold front responsible for this whole mess will die out just off to our southeast. That’s close enough for a continuing chance of storms through the end of the week and into the weekend, but it’s a progressively lower chance each day as that front slowly loses its influence: 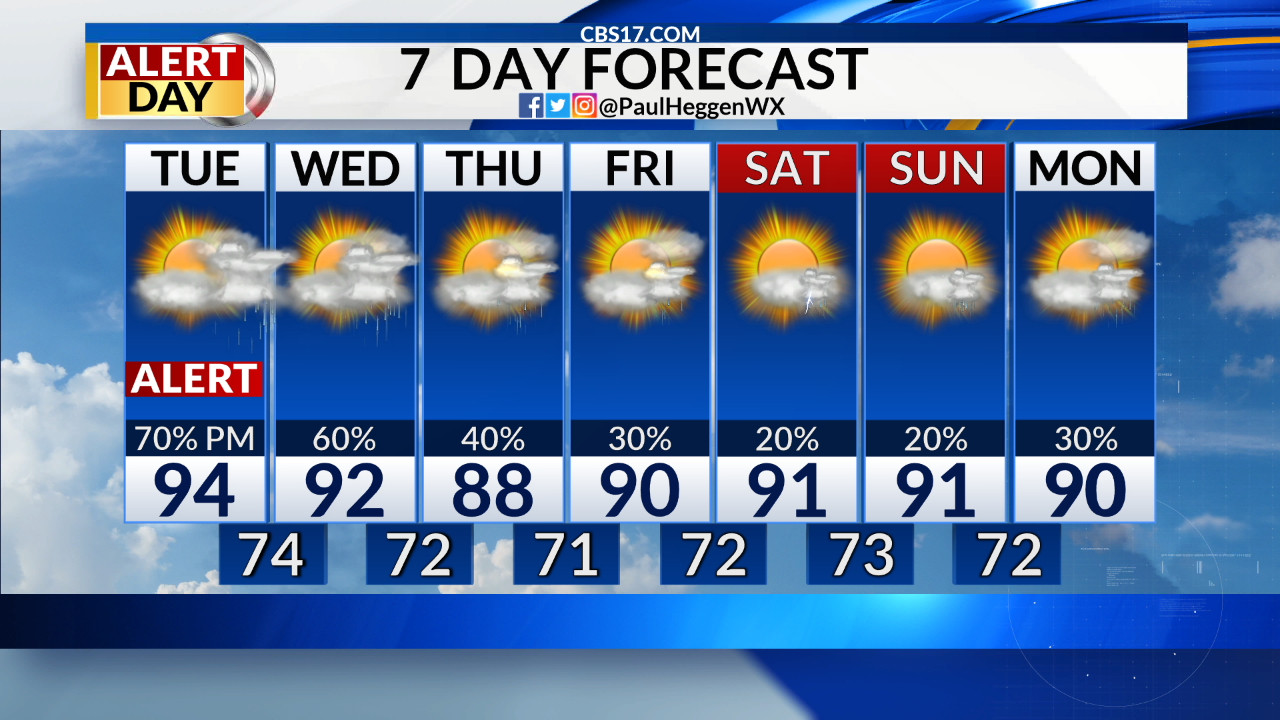 The warning, which was issued just before 7:10 p.m., lasted until 7:30 p.m. A severe thunderstorm capable of producing a tornado was spotted near Norlina, which is about 7 miles north of Warrenton. It was moving northwest at 20 mph.

The weather system became a named tropical storm around 8 a.m. Wednesday when it was approximately 30 miles east-southeast of Charleston, South Carolina.

SMITHFIELD, N.C. (WNCN) - The National Weather Service issued a flood warning for Smithfield starting Wednesday afternoon and lasting until further notice, according to a notice on Monday.

As of 9:15 p.m. Monday, the Neuse River in Smithfield was measured at 14.1 feet. Flood stage is 15 feet. The National Weather Service forecasts minor flooding, it said.

Victims of robbery, a Fort Bragg soldier and his roommate seek justice

Soldier stops active shooter by striking him with vehicle

US deaths from coronavirus surpass 100,000 milestone

Raleigh 7-year-old puts on prom for his graduating babysitter

Contact tracing apps could speed up identification of virus-sickened persons

Why Triangle residents may be seeing more snakes in their neighborhoods

Prosecutors: Man hid in 12-year-old’s bedroom for a month while sexually abusing her