Some pretty hefty storms developed in yesterday’s heat and humidity, including one that parked over Raleigh for a while, dropping about two inches of rain. The same pattern will repeat itself today and over the weekend: mostly dry conditions through midday, then a good chance of scattered showers and storms in the afternoon and evening.

Before today’s storms fire up, skies will clear enough for temperatures to warm up into the 80s: 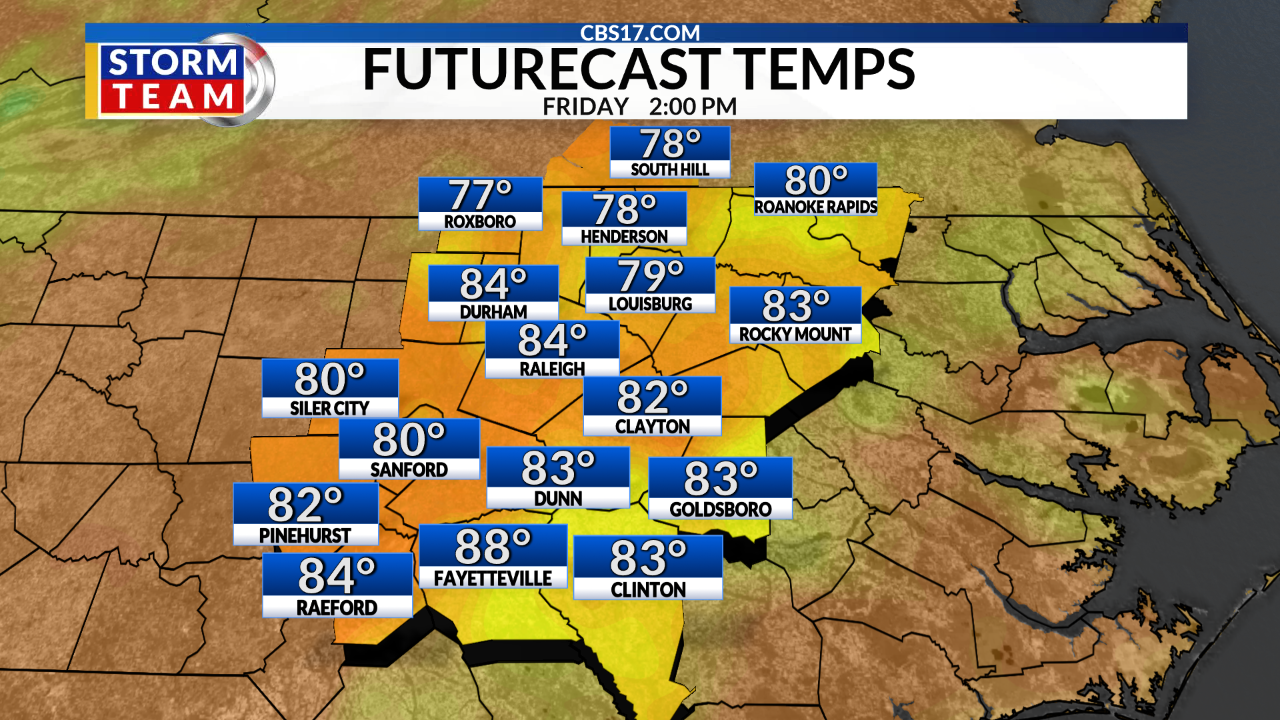 The highest storm chances will be with us from late afternoon into this evening and early overnight: 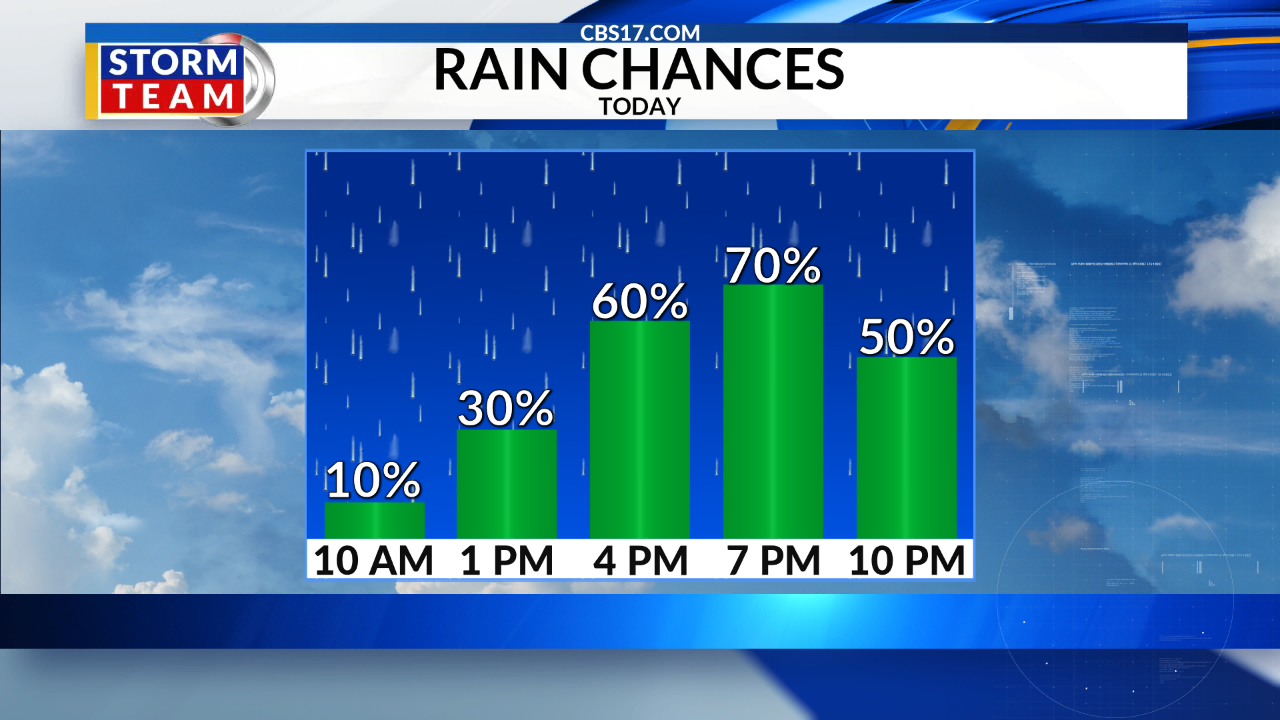 The North American Model’s radar simulation from noon through midnight shows that the storms will be even more-widespread than what developed yesterday:

Our severe weather threat will be limited overall, but a couple of storms could prompt severe thunderstorm warnings for a damaging wind threat. I’m more concerned about the potential for heavy rain to cause localized flooding, especially with more storms in the forecast this weekend. Total rainfall amounts over the next several days could exceed 2″-3″ across much of central North Carolina: 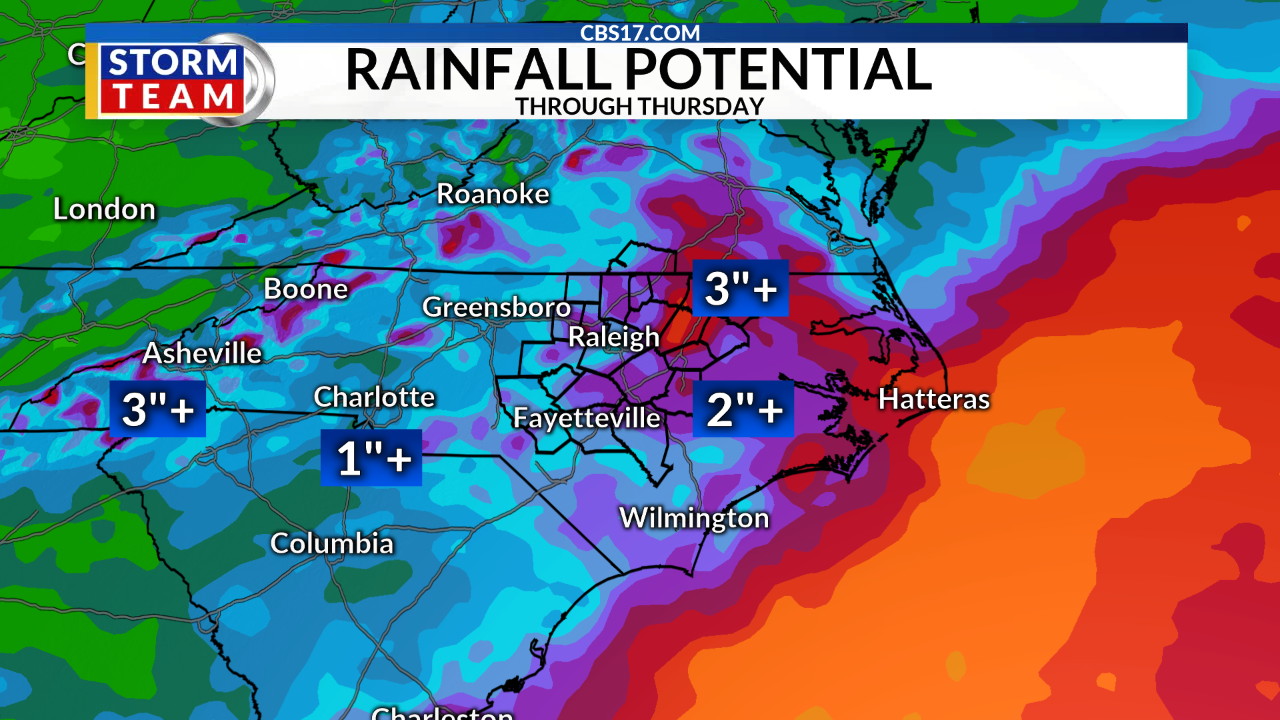 The up-close weather models tend to struggle with this kind of weather pattern, so let’s look at a bigger-picture perspective for Saturday and Sunday. The European forecast model’s simulation from 8:00am Saturday through 8:00pm Sunday shows plenty of green on the map, as showers and storms re-develop each afternoon:

They’ll be scattered storms, so there will be some gaps in between…but be very flexible with outdoor plans, and have an indoor alternative ready-to-go.

The unsettled pattern continues Monday, before a drier pattern takes hold for a couple of days: 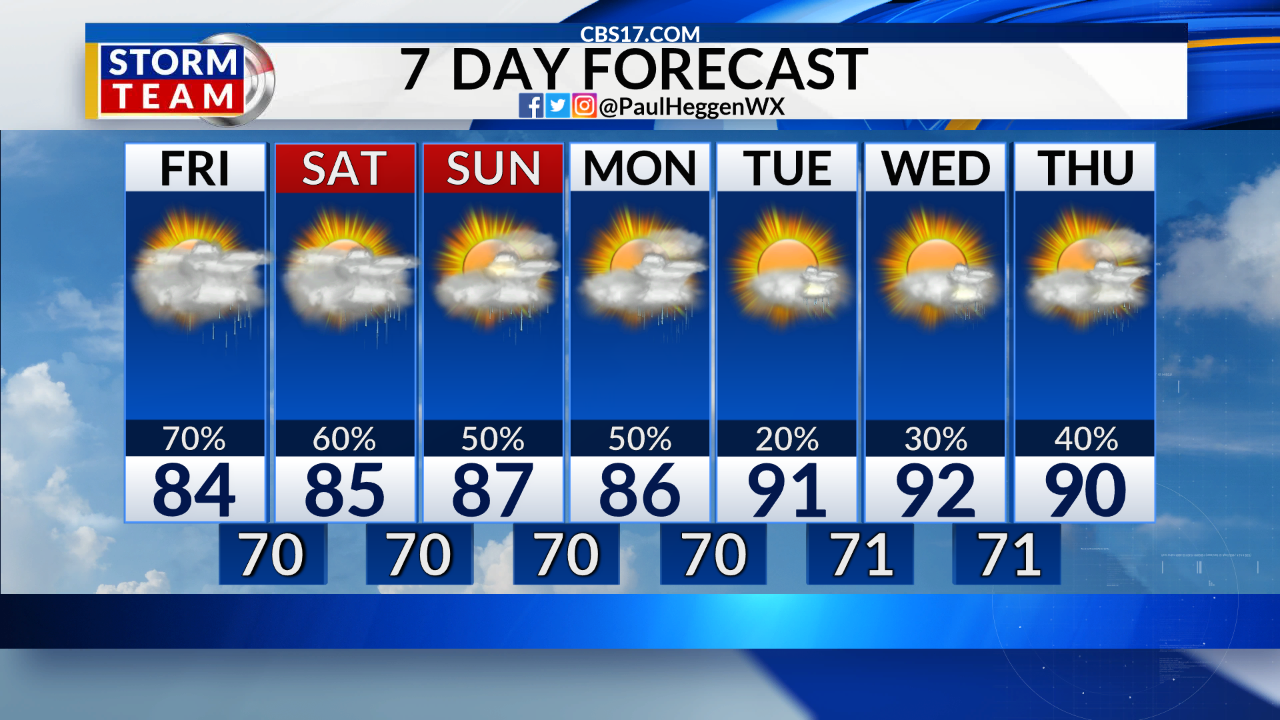 We won’t get to enjoy drier air near ground level, though — the humidity will be stuck at “gross” on the Muggy Meter for the foreseeable future: 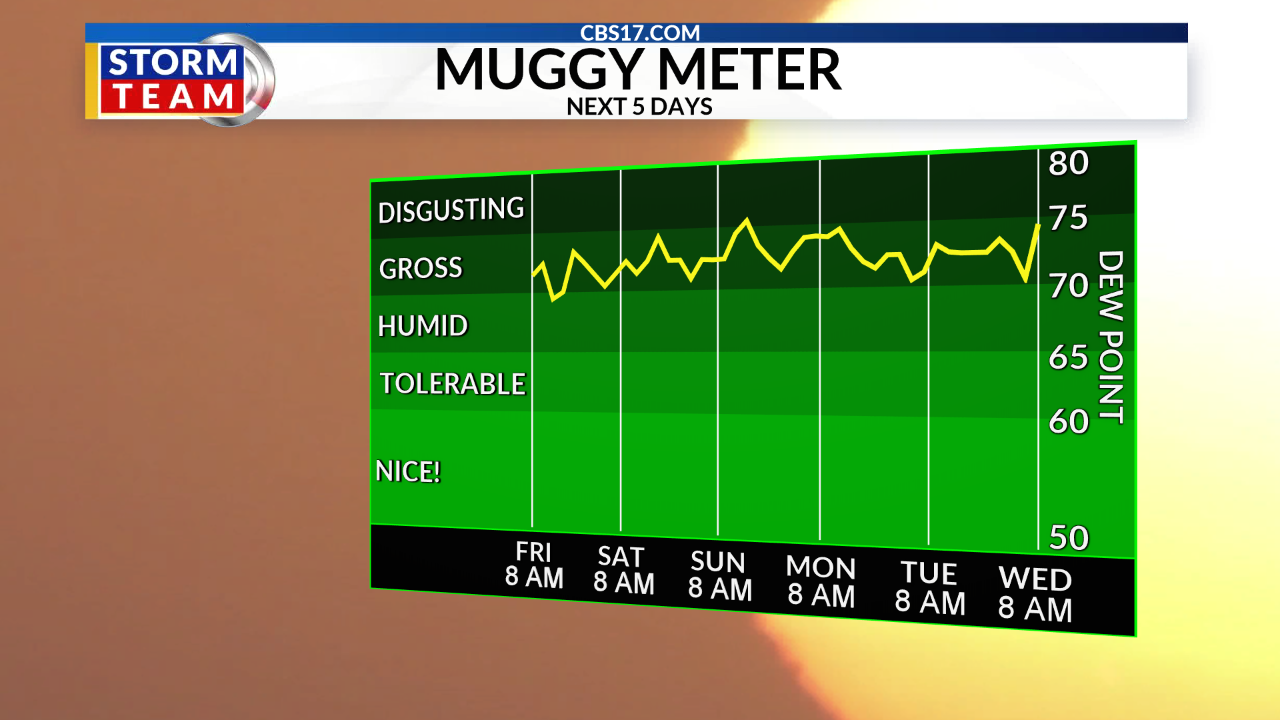 The long-range data shows an unsettled pattern developing again by the end of next week and into next weekend.

The tropics don’t look like as much of a concern as they did about 48 hours ago. The system we were tracking near the Bahamas has virtually no chance of becoming even a tropical depression, so the National Hurricane Center has pretty much stopped tracking it. It WILL feed additional moisture into our storm chances this weekend, but there won’t be any direct tropical impact along the coast.

The one farther out in the Atlantic also looks less impressive, although the NHC still estimates a 40% chance it becomes a tropical depression over the next 5 days: 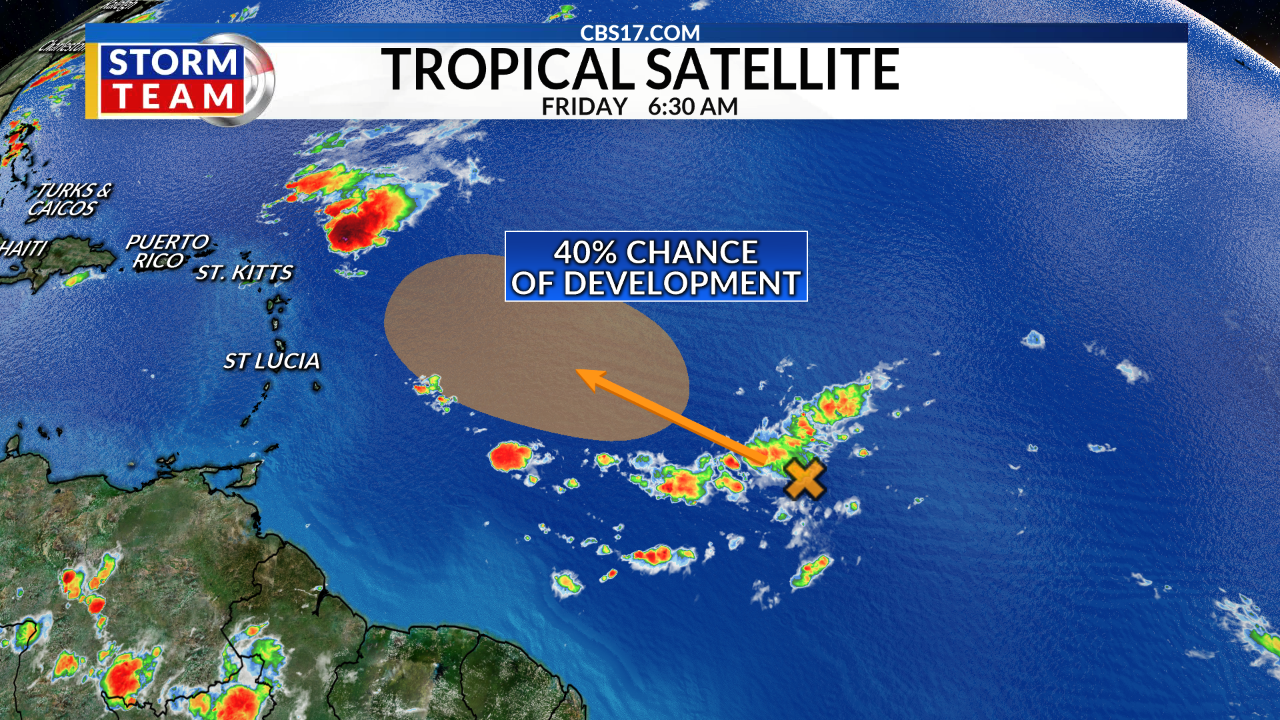 Every run of the European forecast ensemble (our most-accurate tool for these kinds of systems) shows lower and lower chances that this thing becomes a tropical storm. The latest data indicates just a 10% chance by the middle of next week:

There’s another “tropical wave” farther out in the Atlantic, but it’s WAY too soon to worry about that one. We’ll keep a close eye on things — as Colorado State University hurricane expert Phil Klotzbach noted on Twitter yesterday: 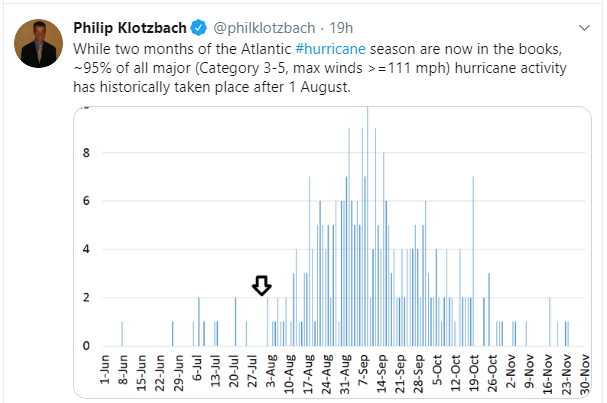 (CNN) - The robots are coming for Punxsutawney Phil’s job, too.

People for the Ethical Treatment of Animals is calling on the keepers of the weather-forecasting groundhog to let him retire — and to be replaced by an animatronic groundhog.

Woman seeks pardon for role in string of killings in 1950s

Political act at Biden office led to arrests, but organization believes in their cause