Relief from the heat and humidity is on the way…but it isn’t here just yet.

Today will bring the hottest temperatures we’ll see for a while — we’ll be well into the 90s this afternoon: 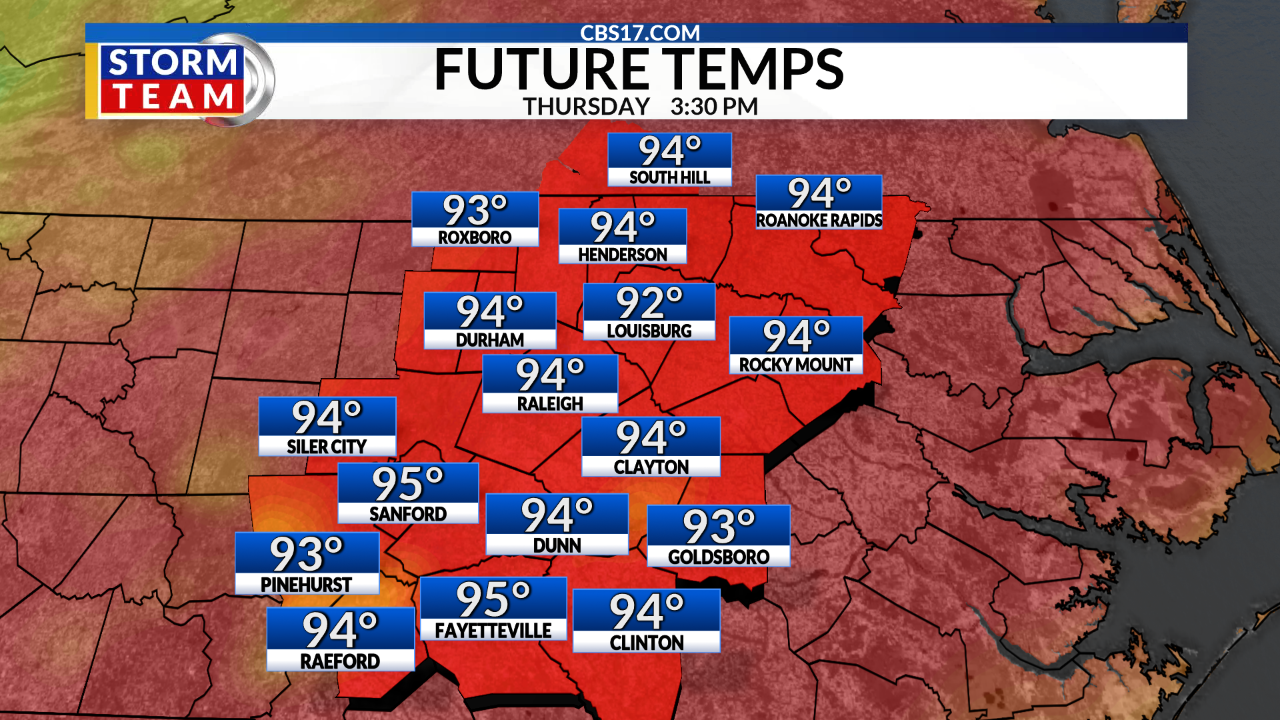 The heat index will top 100° in most locations: 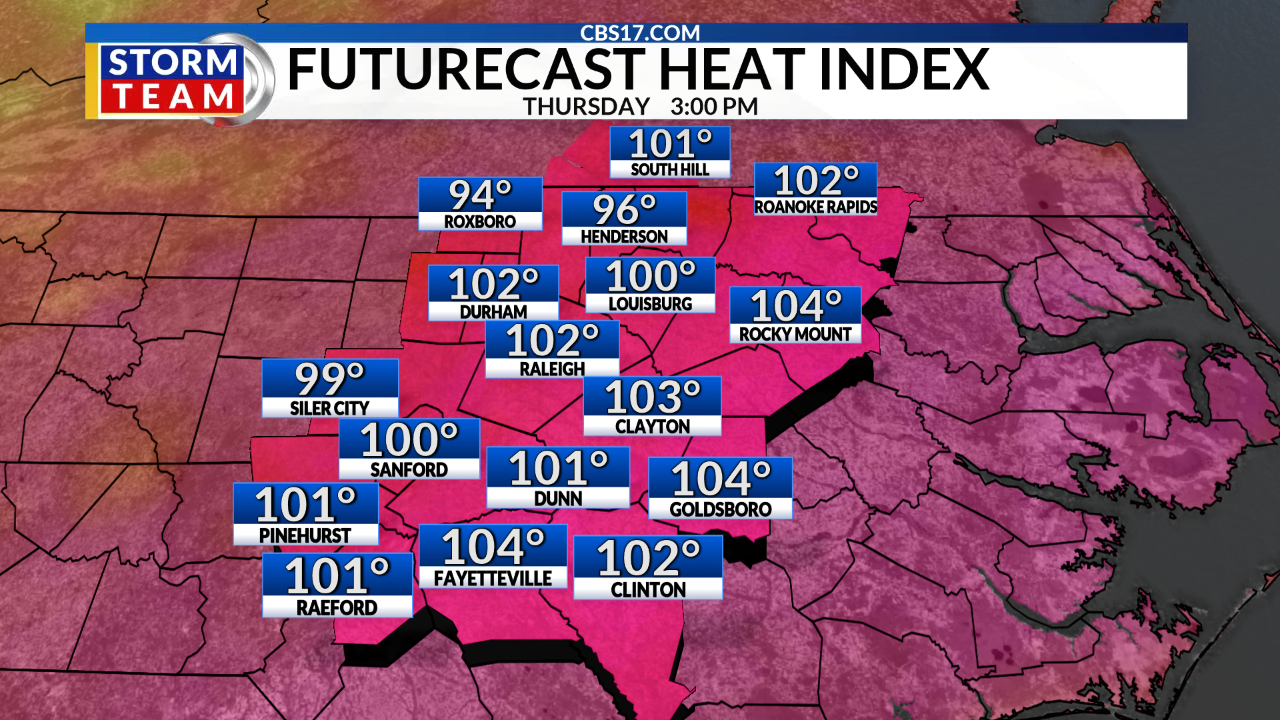 We’ll see some spotty storms bubbling up by mid to late afternoon, with more storms tracking in from the west this evening. It’s a coin-flip rain chance in any particular spot, but be flexible with any outdoor plans late today: 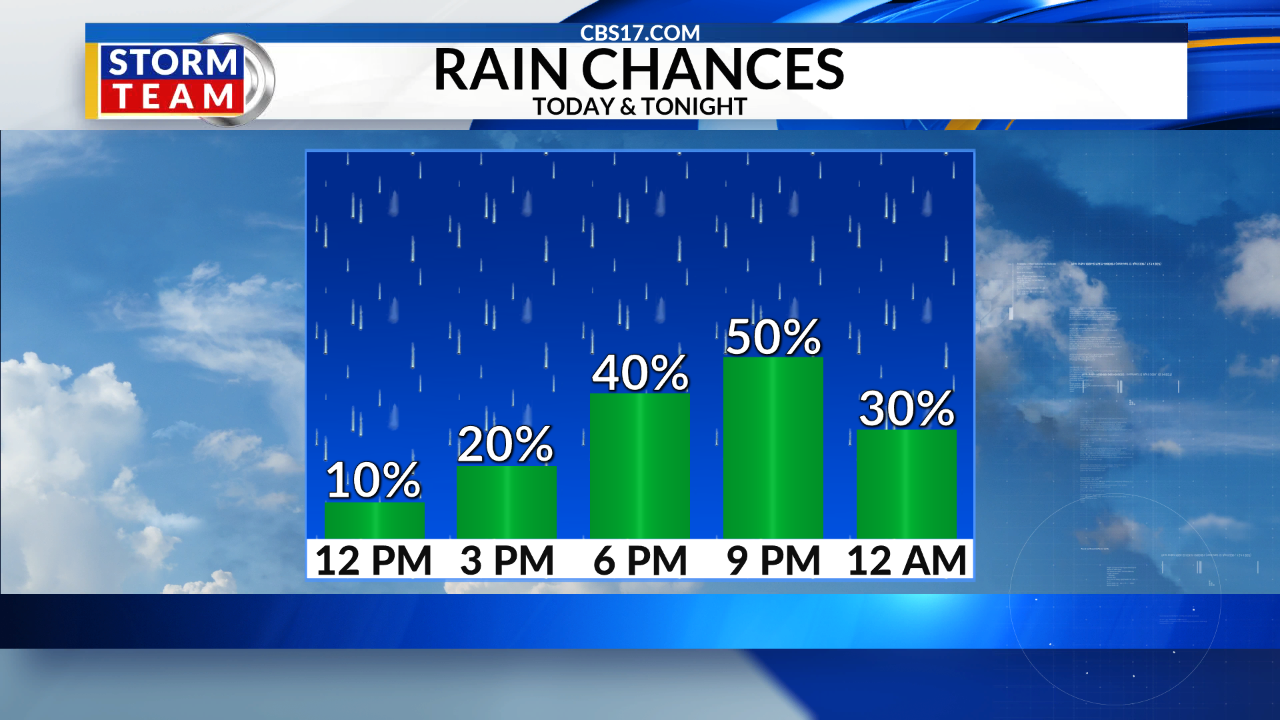 The HRRR model’s radar simulation from noon through midnight shows the hit-or-miss pattern of the storms:

The storms that move in from the west will have the greatest potential to prompt a severe thunderstorm warning or two. The Storm Prediction Center has outlined a “Marginal Risk” (level 1 of 5) of severe weather for central North Carolina: 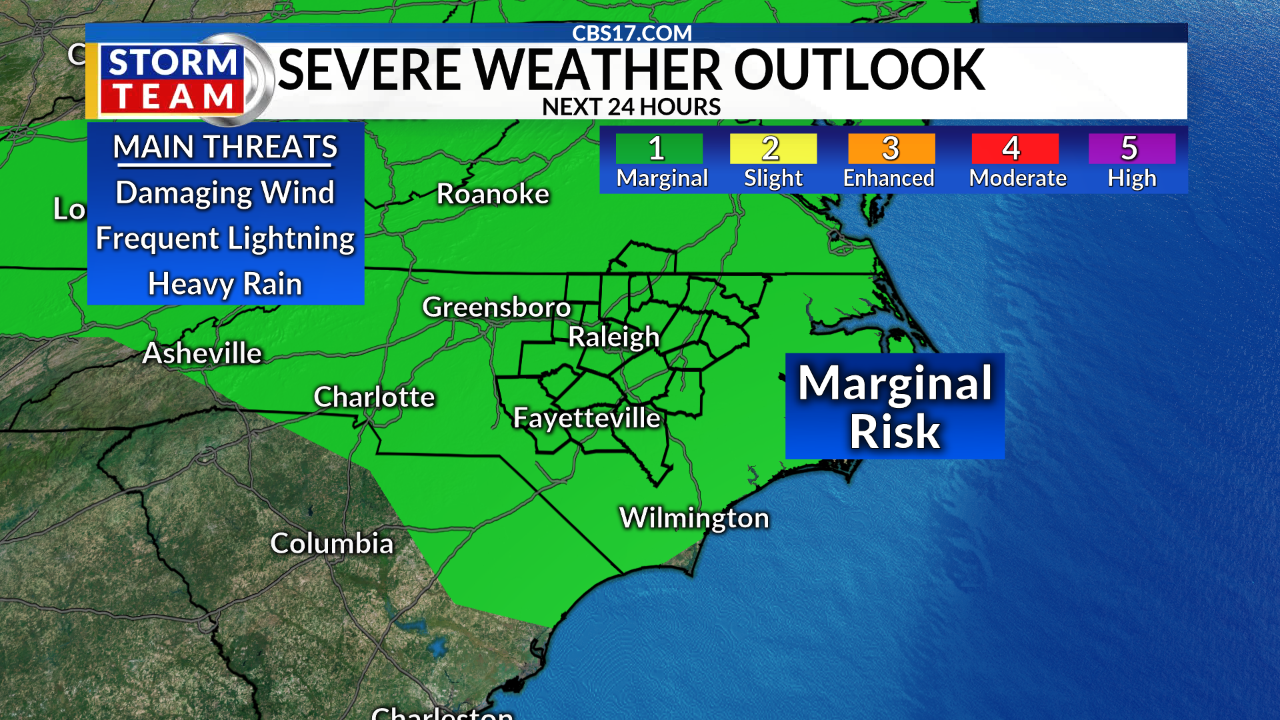 Tomorrow will bring a greater threat of severe weather, but it will be hot and humid again before those storms develop. Highs will top out around 90°, and the heat index will reach the upper 90s: 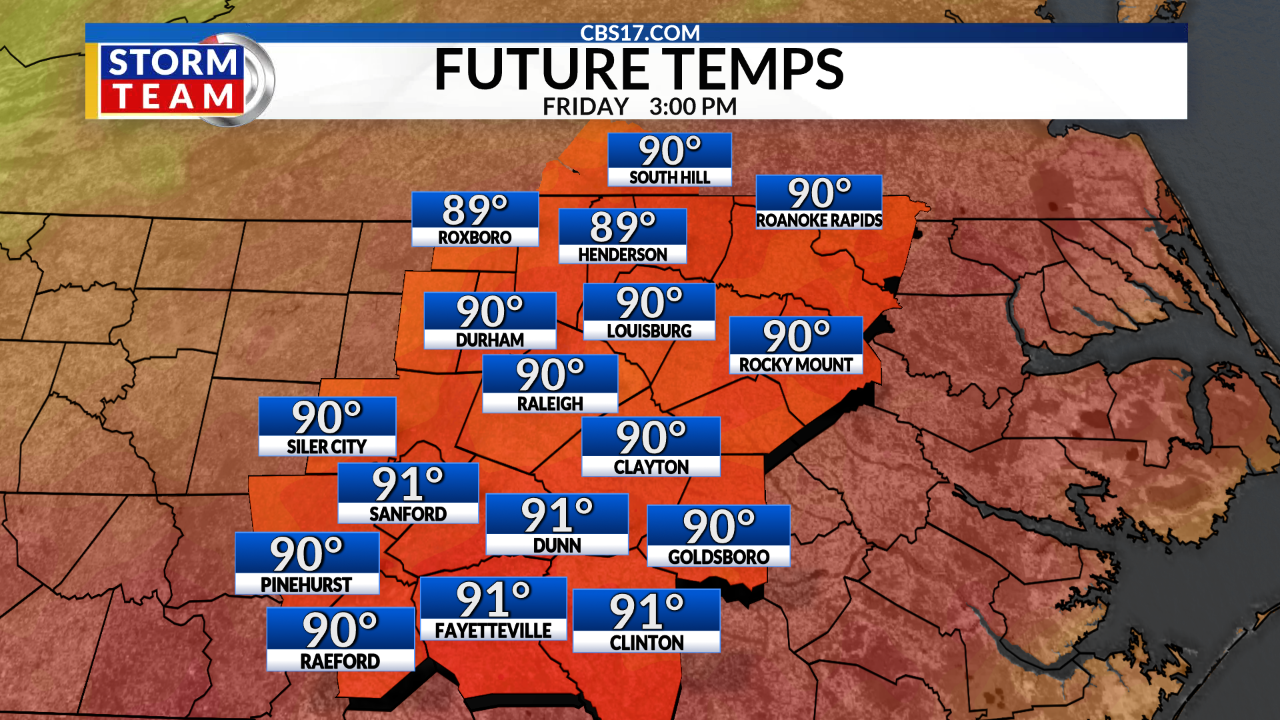 Friday’s storms will develop by late afternoon and become widespread during the evening and early overnight. The North American Model’s simulation from noon Friday through 6:00am Saturday shows a line of strong storms marching southward, diminishing to showers later in the night:

So far, the SPC is showing a Marginal Risk again for all of central North Carolina, but I think this could be bumped up a category to a Slight Risk before all is said and done: 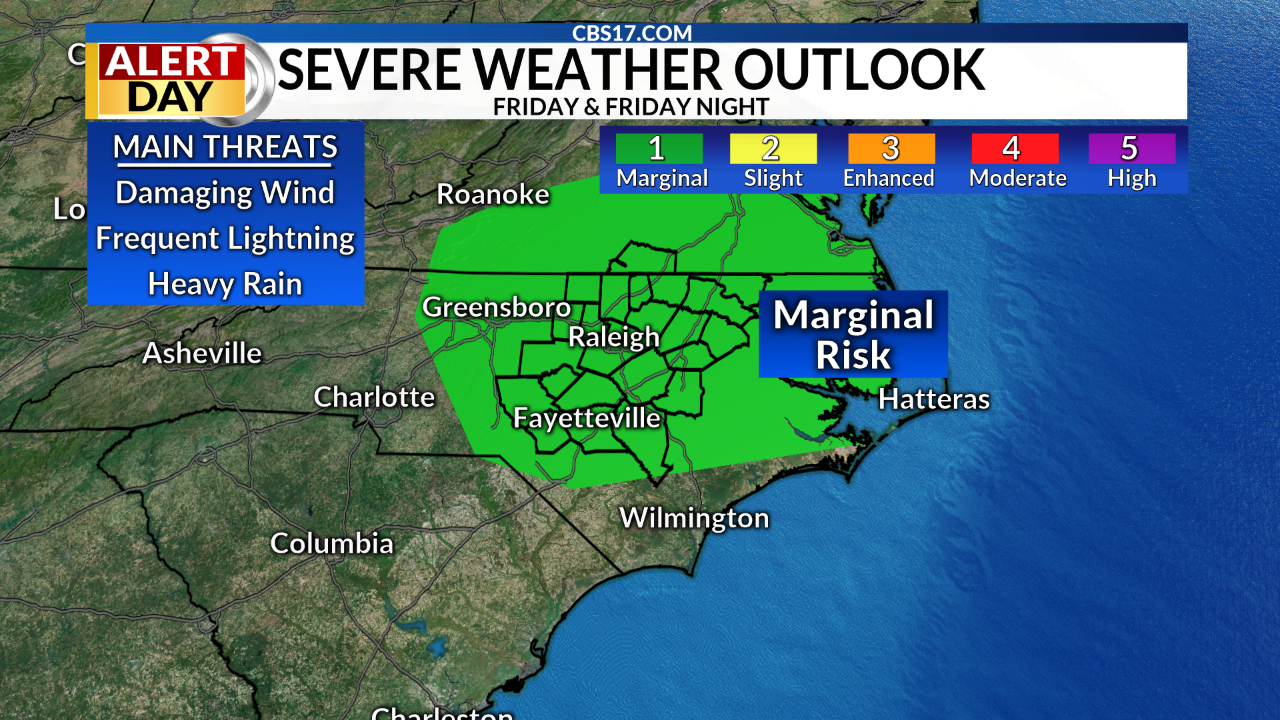 That means we expect numerous storms with several severe thunderstorm warnings, but it won’t be anything you’d call an “outbreak.” Damaging winds will be the main threat — just plan on staying weather-aware late Friday, and we’ll keep you updated as the whole situation evolves.

Saturday will be a gray, showery day…but it will be significantly cooler! Northeasterly winds will trap the clouds and showers against the higher terrain to our west, which will keep temperatures in the 70s all day: 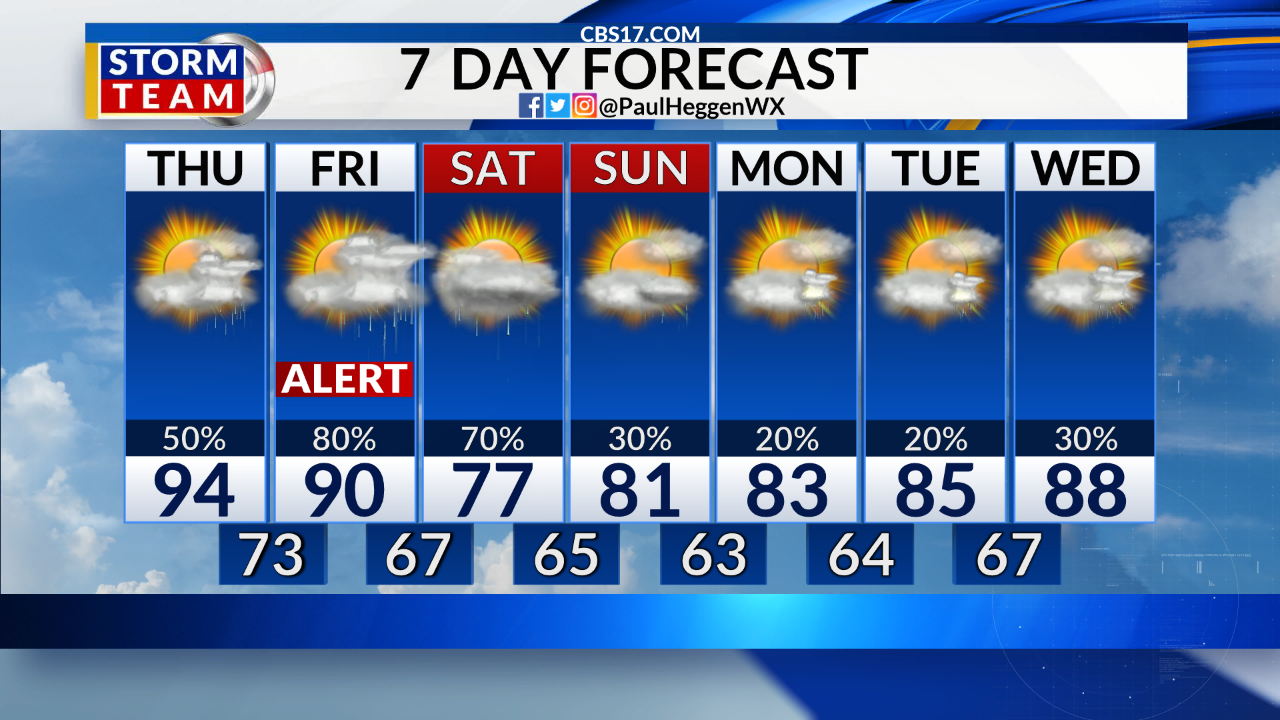 The best chance of lingering showers will be southeast of the Triangle on Sunday — highs will return to the low 80s, but the humidity will be noticeably lower. The Muggy Meter from the European forecast model shows a nice drop that will persist into early next week: 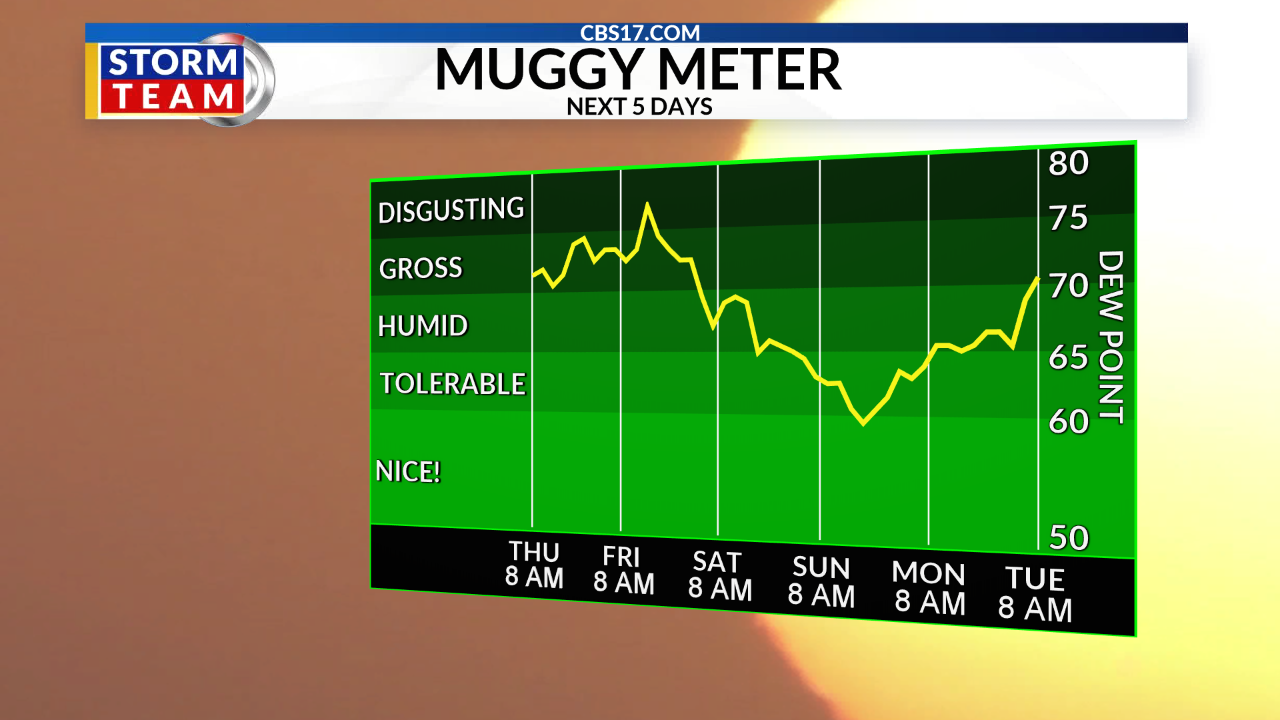 First, the nuts and bolts of what’s going on: there’s an area of disturbed weather near the Bahamas that’s trying to get its act together. The National Hurricane Center estimates just a 20% chance that it even becomes a tropical depression over the next 5 days, as it runs along (but just off) the southeastern U.S. coast: 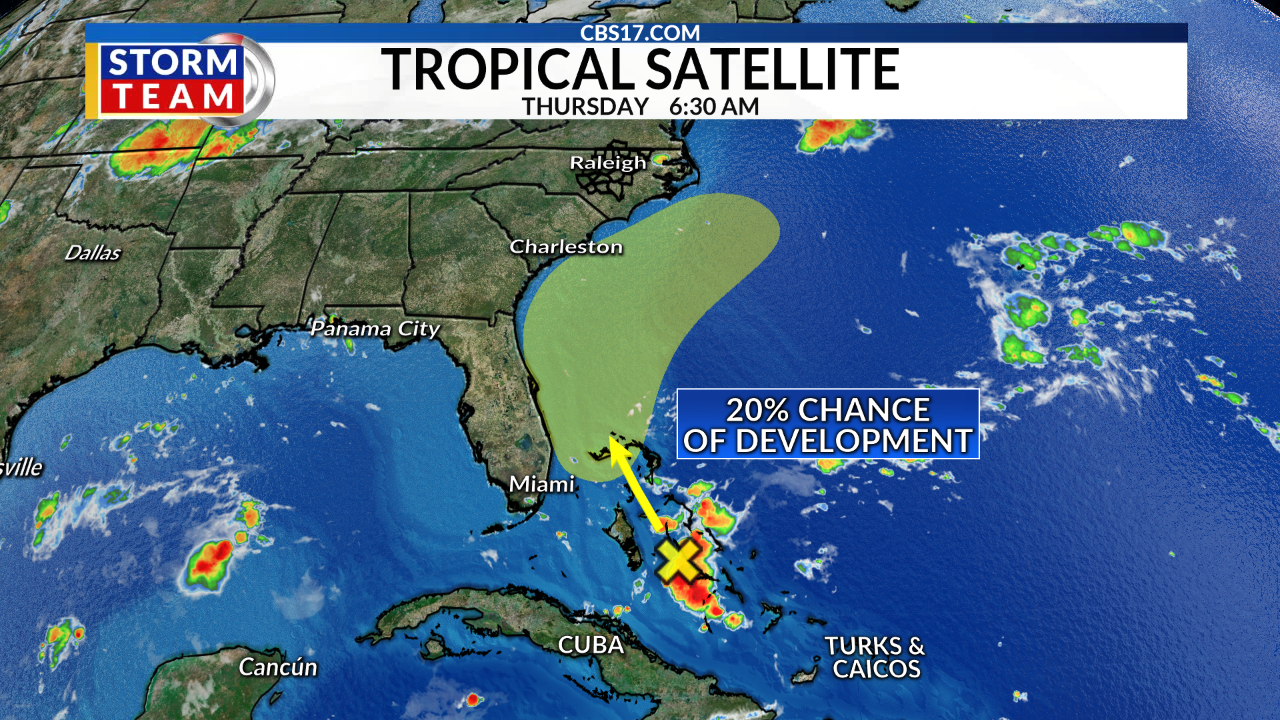 …and just below a 50% chance it becomes Tropical Storm Dorian by early next week:

While that forecast path is a little too close for comfort, it does look like the system — regardless of strength — will stay offshore. The counter-clockwise flow of air around it puts central North Carolina under the influence of northeasterly winds Sunday and Monday: 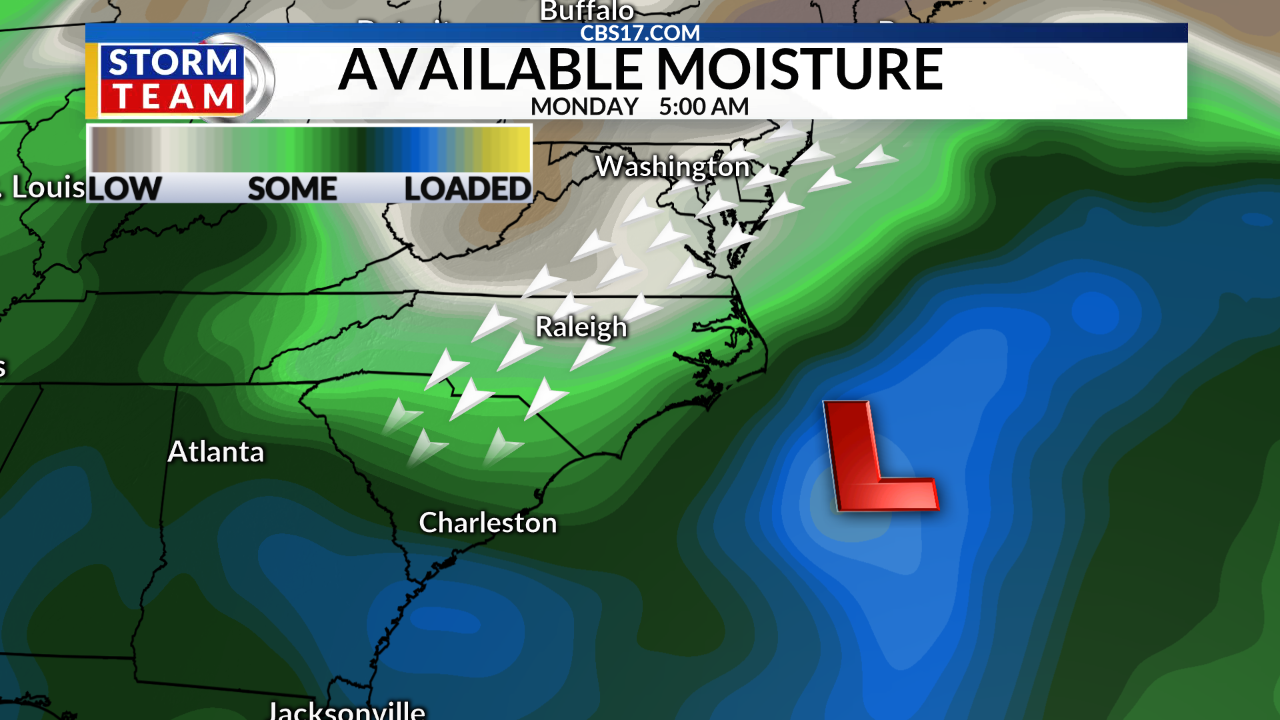 That’s a cooler and drier direction, which is why temperatures and humidity levels will remain below-average into early next week!

We’ll of course keep a close eye on that tropical troublemaker, in case Mother Nature decides to start throwing curveballs.

Didn’t get $500 stimulus check for your children? IRS says to apply now

Thousands of Britons return from France to avoid quarantine

This NC woman turned 116 and is the oldest person in the U.S.

Pompeo inks deal for US troop move from Germany to Poland

UPDATE: Overwhelming response to boy’s search for a family, ‘I hope one of y’all pick me’

Raleigh man charged in shooting along Falls of Neuse Road