Last week’s steamy weather pattern is a distant memory at this point — temperatures stayed in the 60s and 70s over the weekend, and the below-average temperatures are sticking around for a couple more days. We’ll see a mix of clouds and sun today, with highs only warming up to around 80° this afternoon: 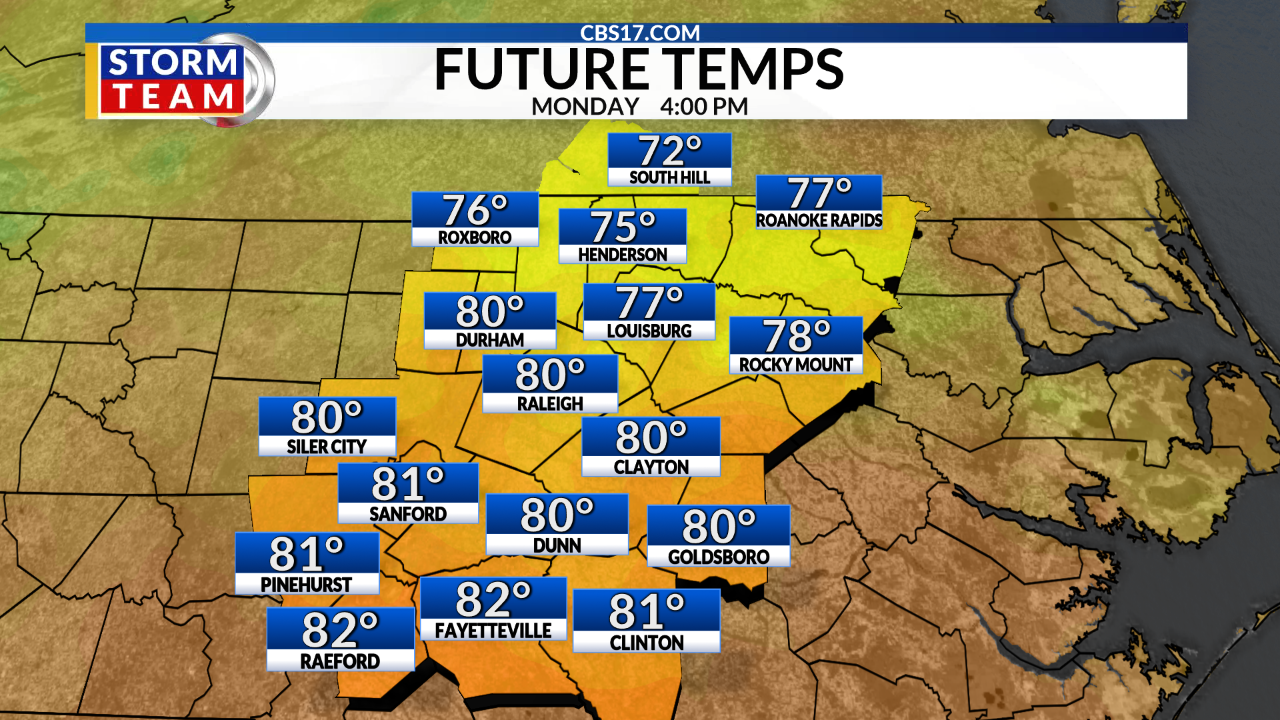 To put that in perspective, 80° is the average high temperature for September 23 — that’s the first day of autumn!

I can’t rule out a few passing showers this afternoon, especially northeast of the Triangle: 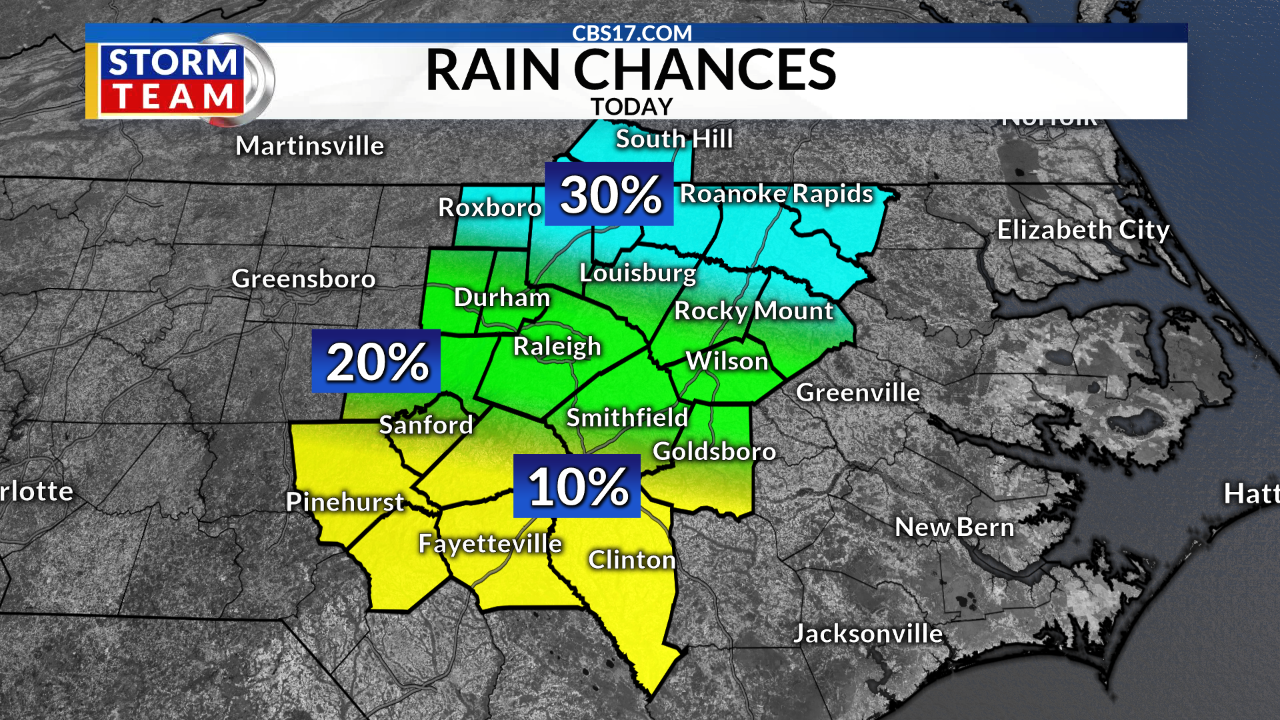 The HRRR model’s radar simulation from 10:00am through 10:00pm shows the very light shower activity in our northeastern counties:

Temperatures tonight will drop back into the 60s — another comfortable night! 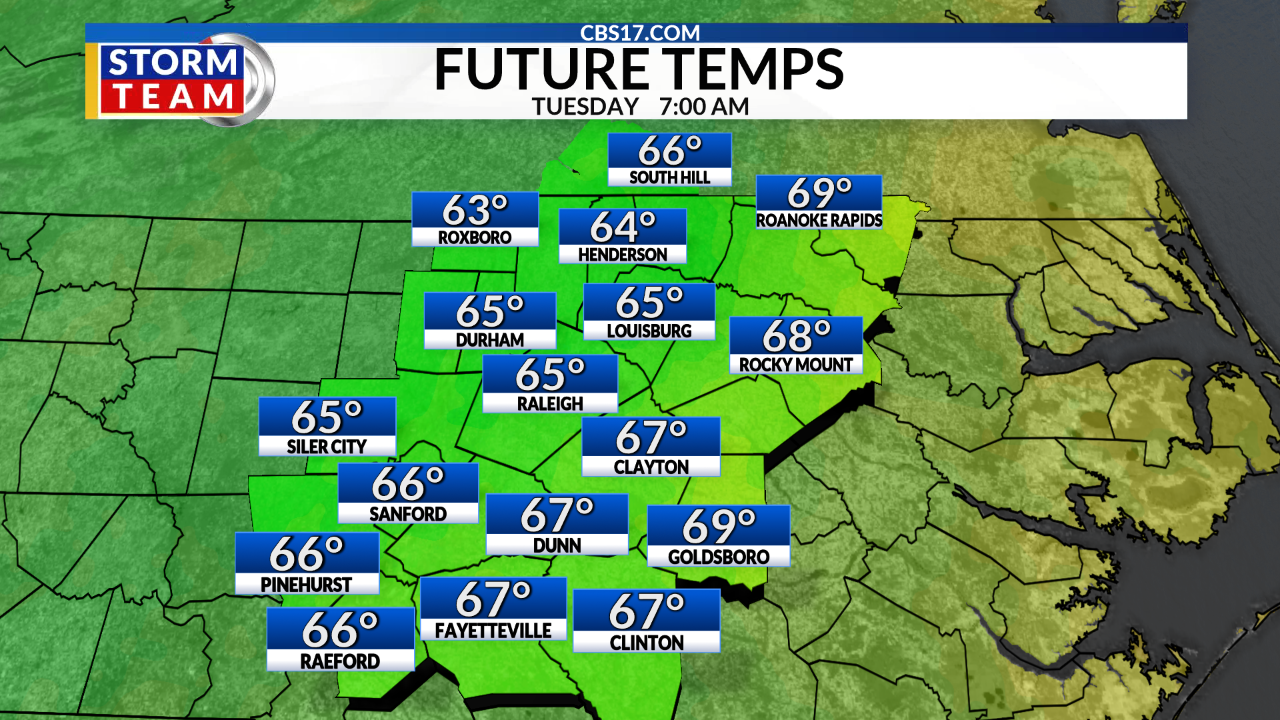 Tuesday’s weather will be very similar — maybe a degree or two warmer: 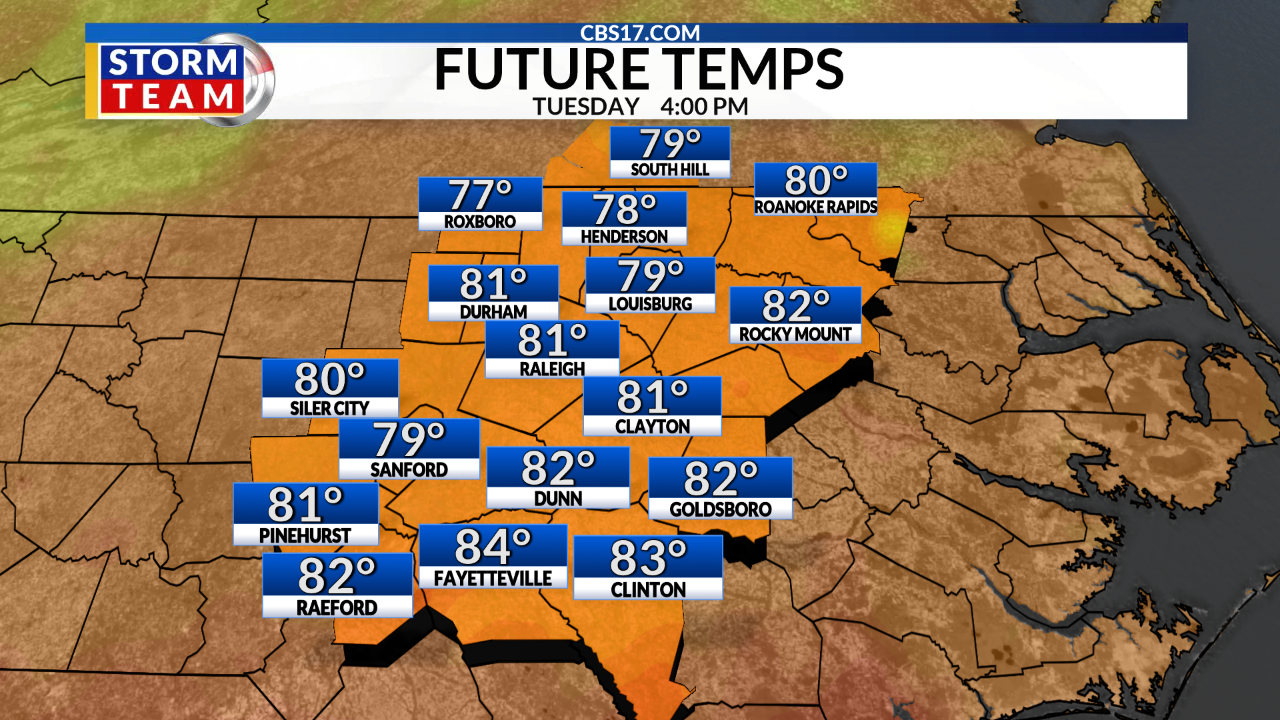 Once again, we’ll see a mix of clouds and sun, with just a slight chance of a passing shower. The North American Model’s simulation from 7:00am through 7:00pm Tuesday isn’t very impressed with our rain chances:

We’ll warm back up to near-average temperatures on Wednesday, before a cold front sparks some scattered storms late in the day. We’ll dry out the rest of the week, with temperatures remaining warm: 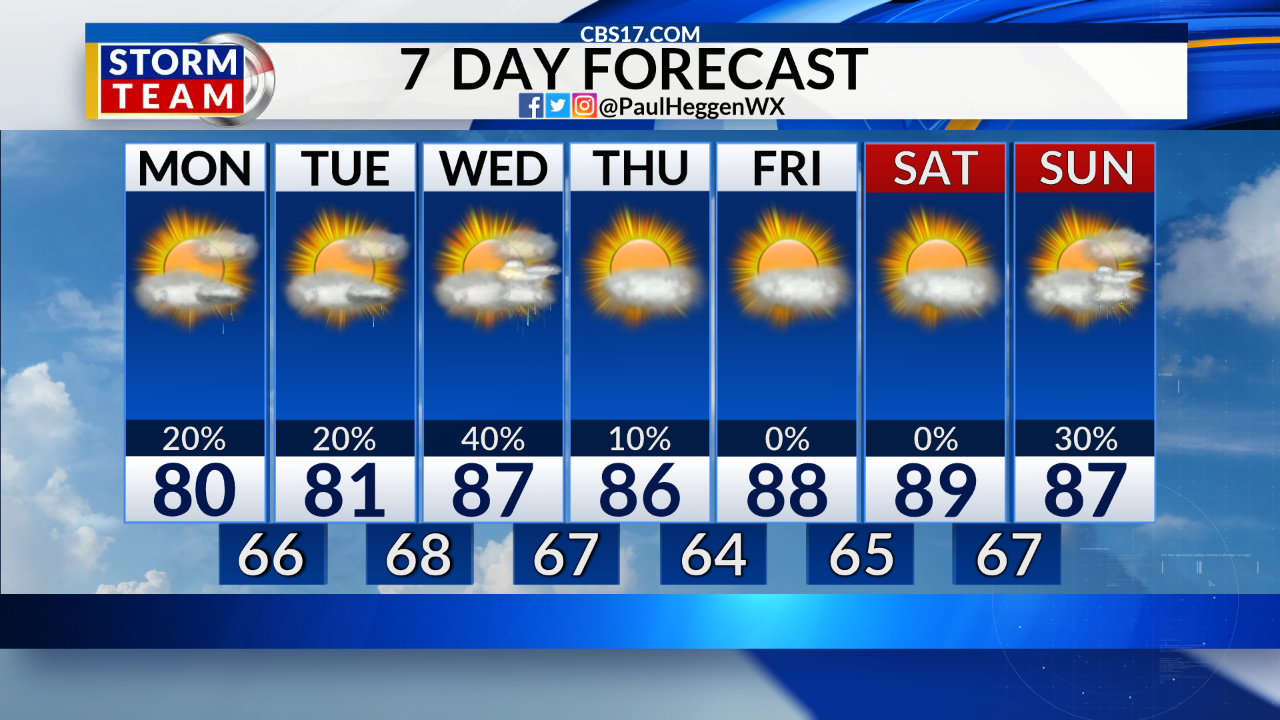 Rain chances increase a bit over the Labor Day weekend, but there’s still significant uncertainty in the long-range forecast, mostly thanks to what may or may not happen in the tropics. 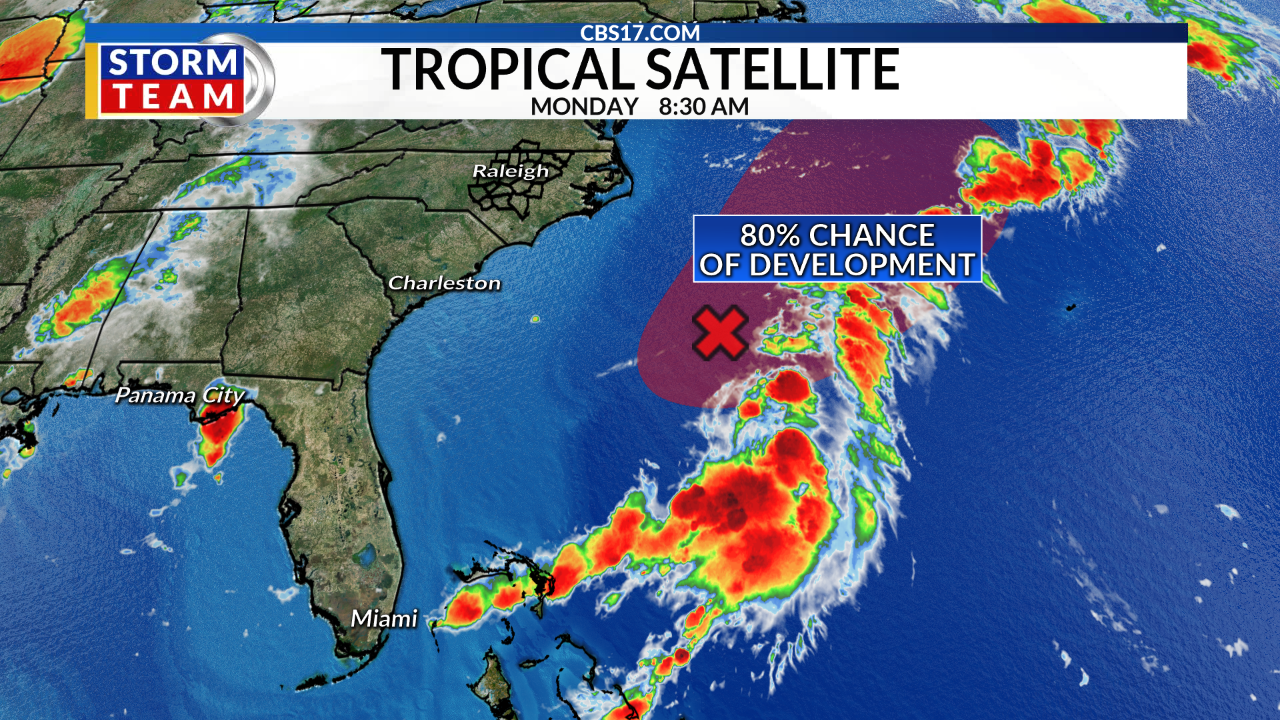 There’s even a chance it becomes Tropical Storm Erin, but it’s not going to directly affect our weather, no matter how strong it becomes.

Tropical Storm Dorian is farther out in the Atlantic, tracking steadily closer to the Caribbean: 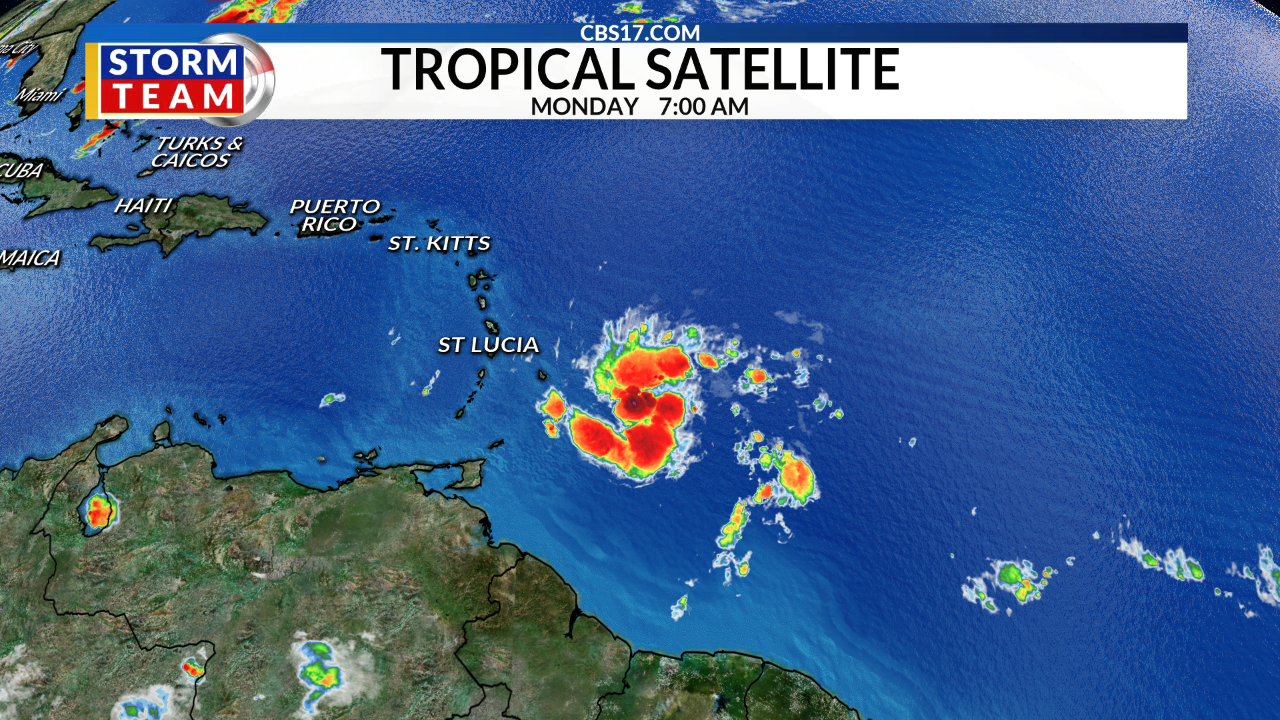 The latest forecast path from the NHC still shows Dorian briefly becoming a Category One hurricane, before it reaches the Dominican Republic later this week: 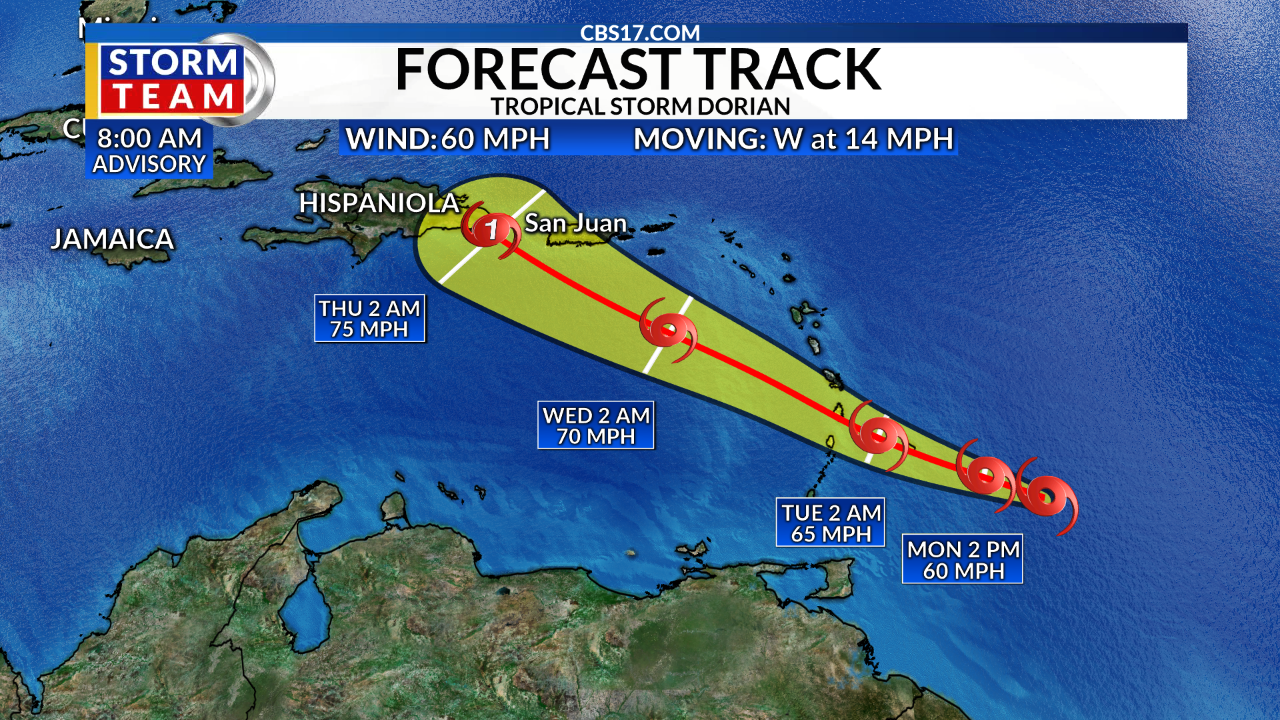 The latest forecast model data is in VERY good agreement on that path: 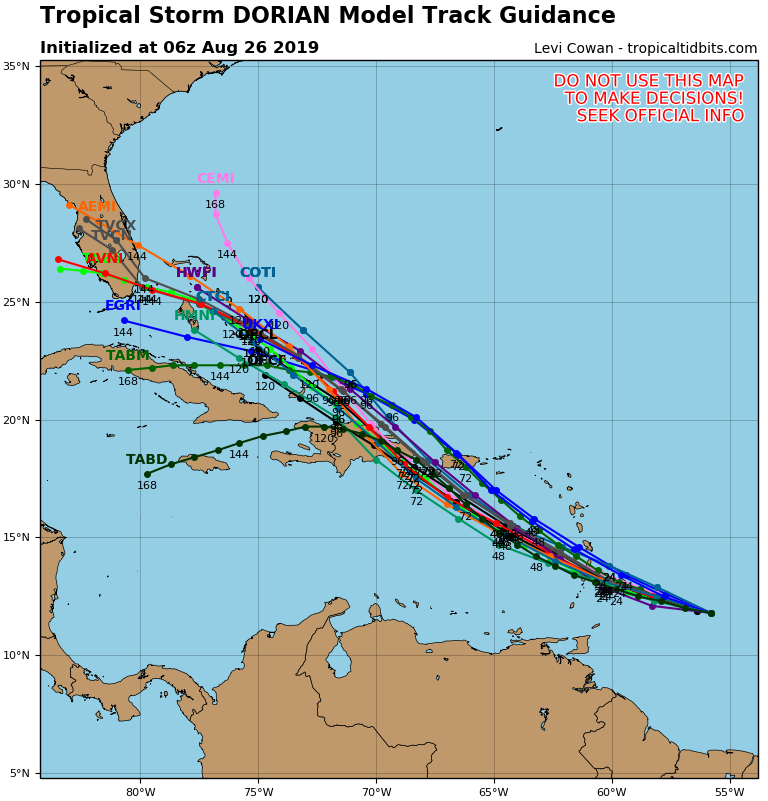 The storm’s interaction with the mountainous terrain of the island of Hispanola will significantly weaken it — the NHC’s forecast shows Dorian weakening to a tropical depression as it tracks towards the Bahamas by the weekend: 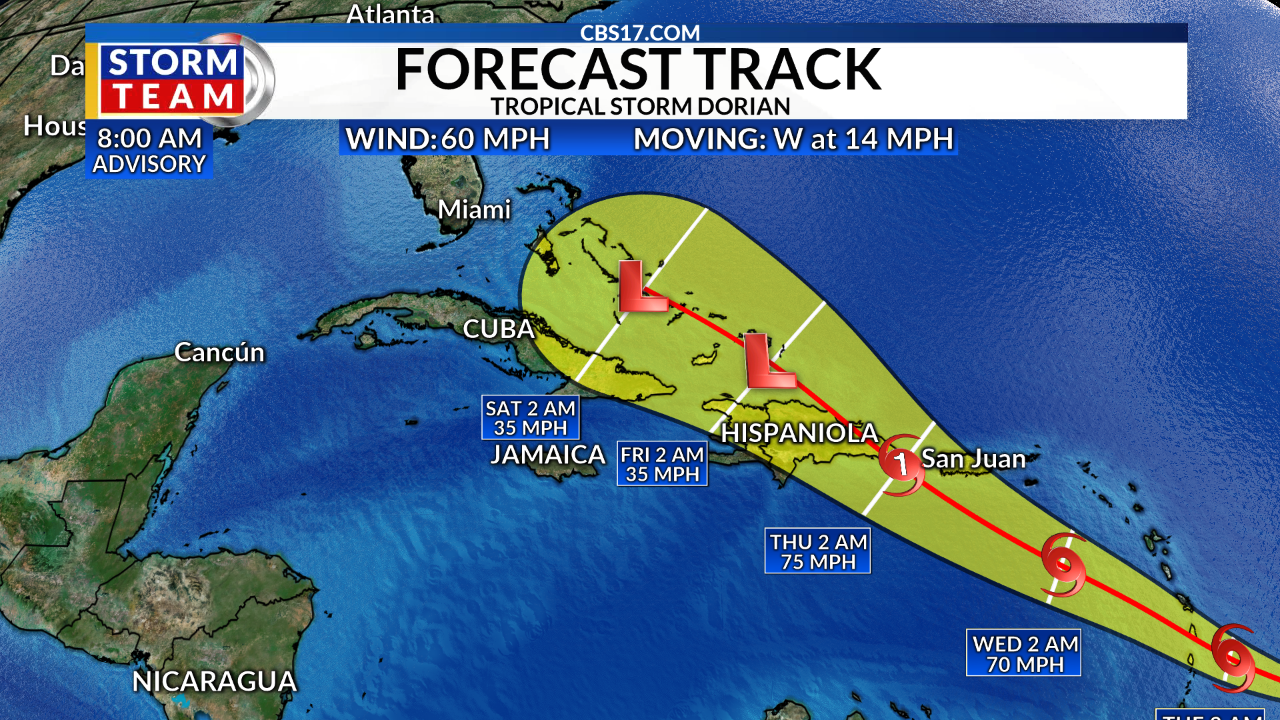 The European forecast model’s ensemble shows a 30% chance that Dorian is still a tropical storm at that point, so we’ll keep a close eye on the latest data throughout the week:

Looking ahead to early next week, we could see some of the moisture associated with Dorian making its way close to us. But any forecast that far in the future is highly speculative! The “spaghettios” plot from the European ensemble shows the various versions of where the storm could be by next Monday morning, and the range of possibilities is WIDE:

It’s something we’ll keep a close eye on, but it isn’t anything you should be worried about at this point (unless you’re traveling to the Caribbean). We’ll keep you updated through the rest of the week!

Thousands of Britons return from France to avoid quarantine

This NC woman turned 116 and is the oldest person in the U.S.

Pompeo inks deal for US troop move from Germany to Poland

UPDATE: Overwhelming response to boy’s search for a family, ‘I hope one of y’all pick me’