We get to enjoy one more comfortable day before typical late-August weather returns tomorrow. Temperatures will only reach the upper 70s and low 80s this afternoon, thanks to plenty of cloud cover to block the August sunshine: 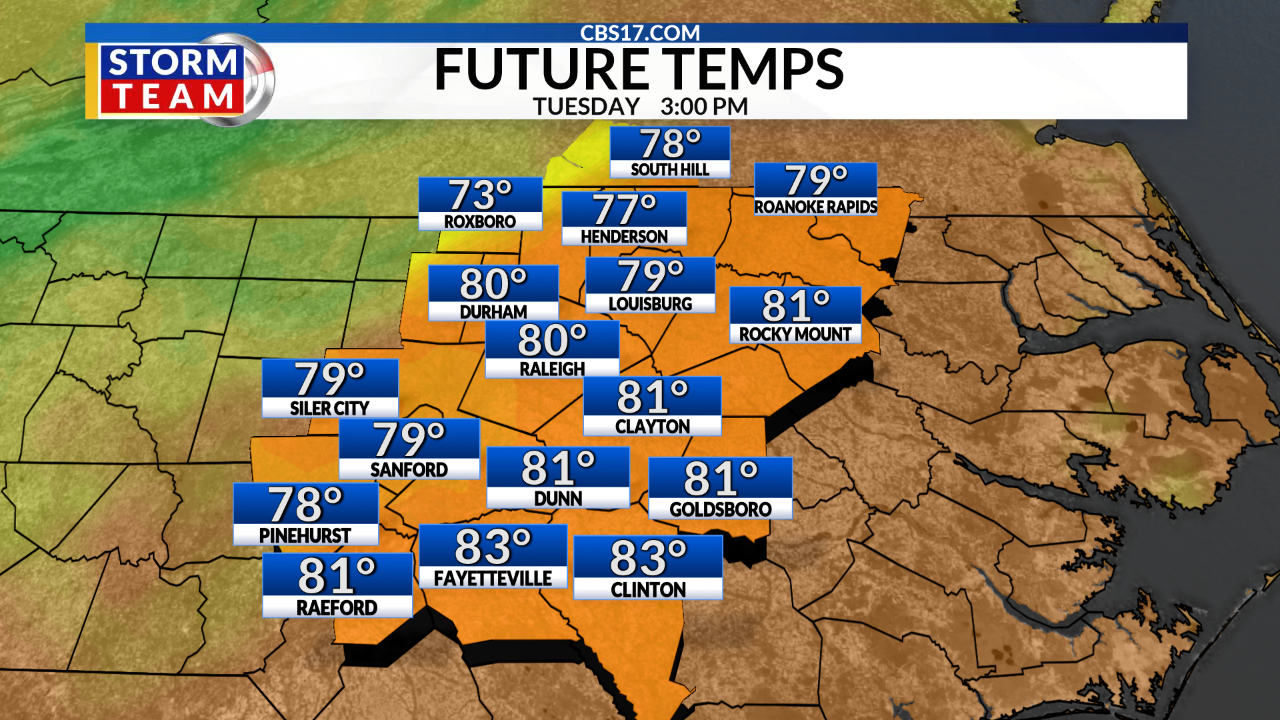 Despite the clouds, we won’t see much of a rain chance — a passing shower or two will be possible, but not very likely. The HRRR model’s radar simulation from 10:00am through 10:00pm shows plenty of rain out to our west, but it mostly falls apart as it tries to move into central North Carolina:

The humidity will increase overnight, which means our wake-up temperatures on Wednesday will be a few degrees warmer: 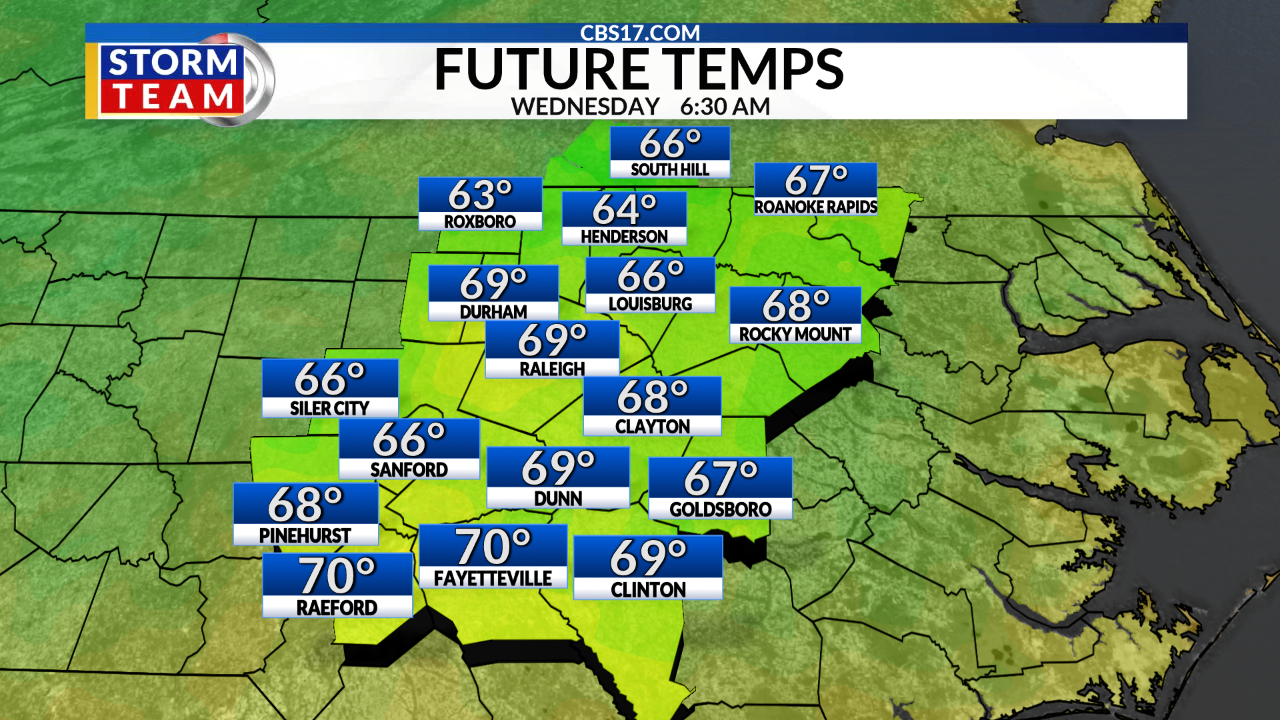 We’ll see a mix of clouds and sun for most of Wednesday, with high temperatures returning to near-normal levels: 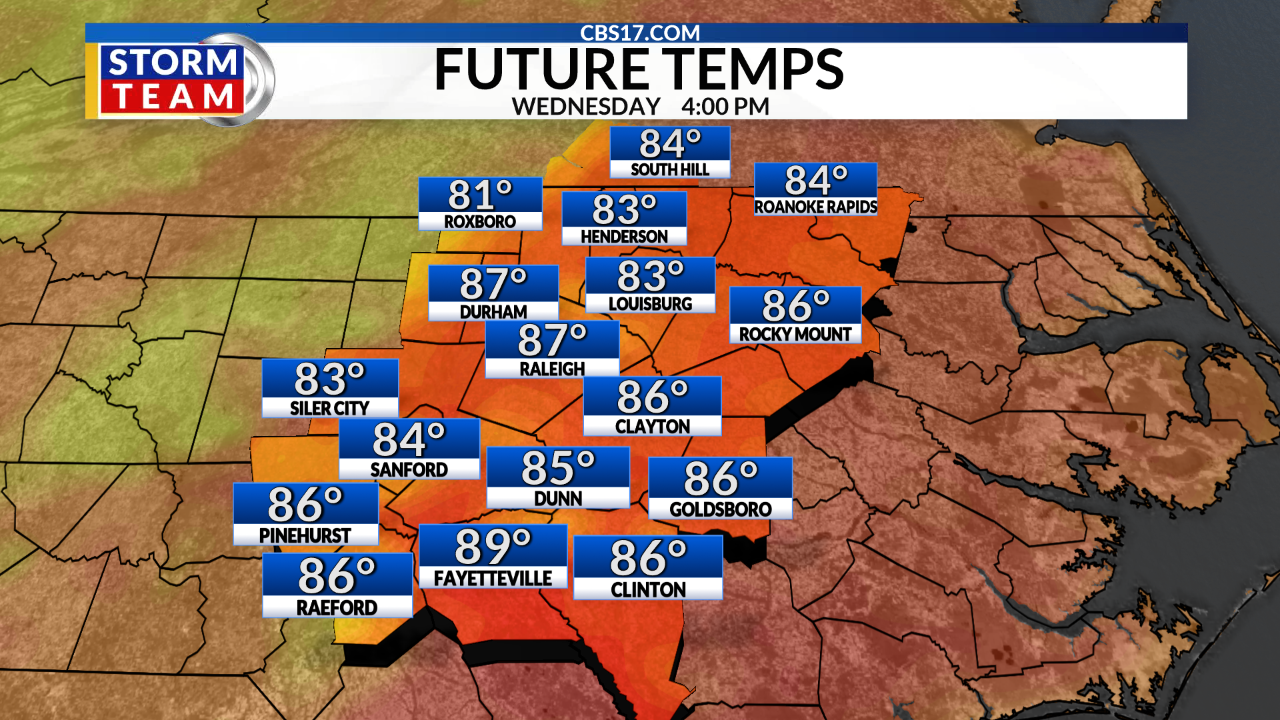 An approaching cold front will squeeze the atmosphere overhead, giving us a chance for some late-day showers and a few thunderstorms. A lot of the forecast model data is trending in a drier direction, but our RPM model is still showing a decent chance for some free lawn-watering: 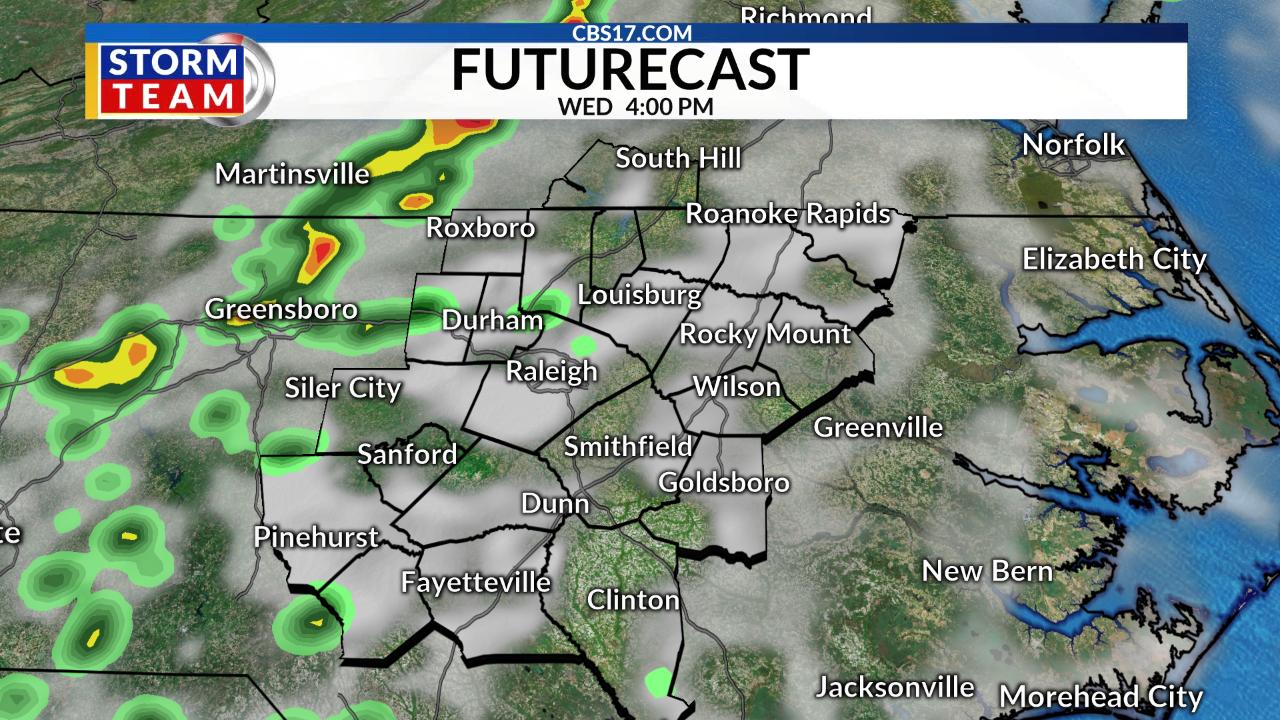 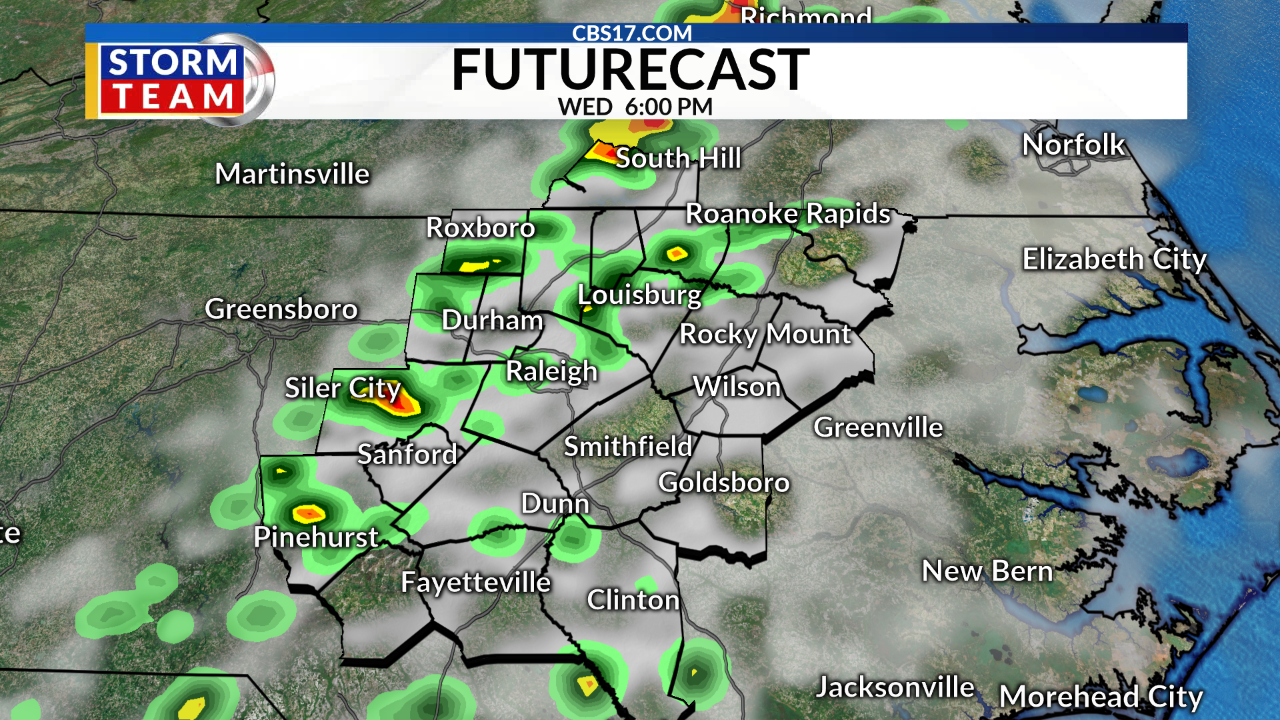 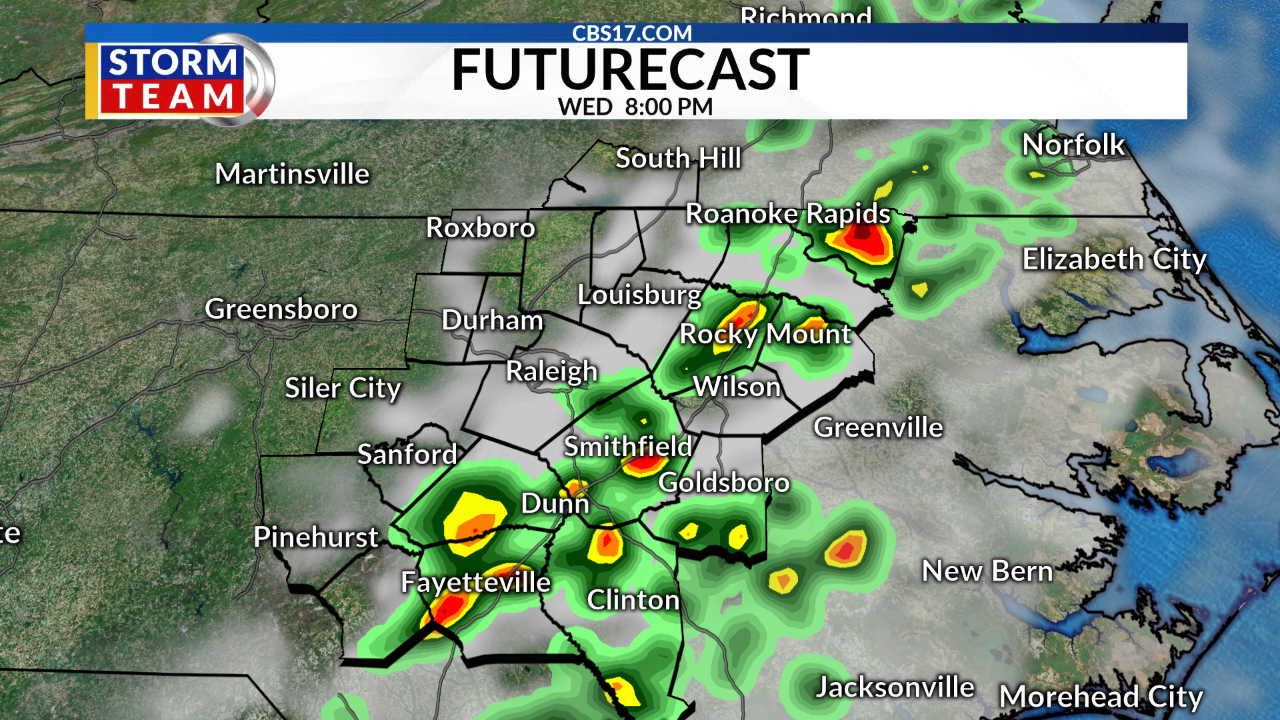 Considering how much of the other data shows mostly dry weather, I’m leaving our rain chances just below 50-50 for now.

The atmosphere dries out again on Thursday, but the 5-day Muggy Meter does show a return of typically humid conditions as we head into the weekend: 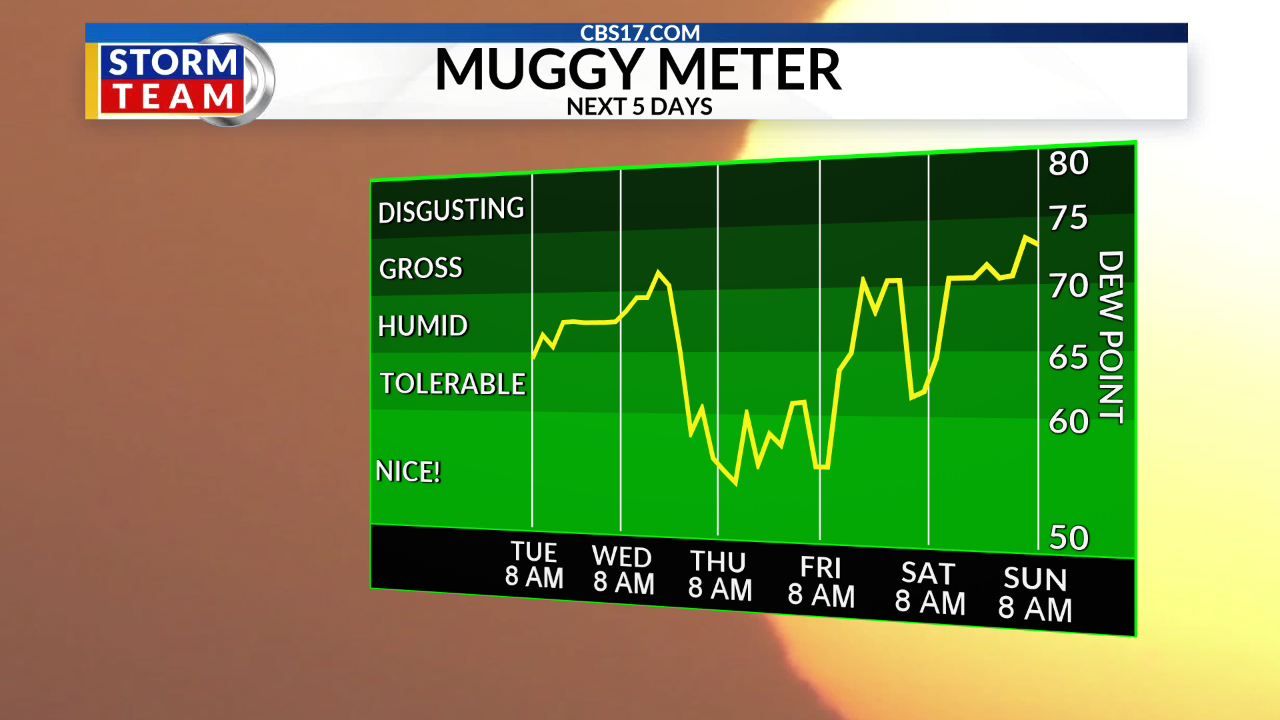 Temperatures will return to near 90° by Friday and Saturday — seems appropriate to finish off August: 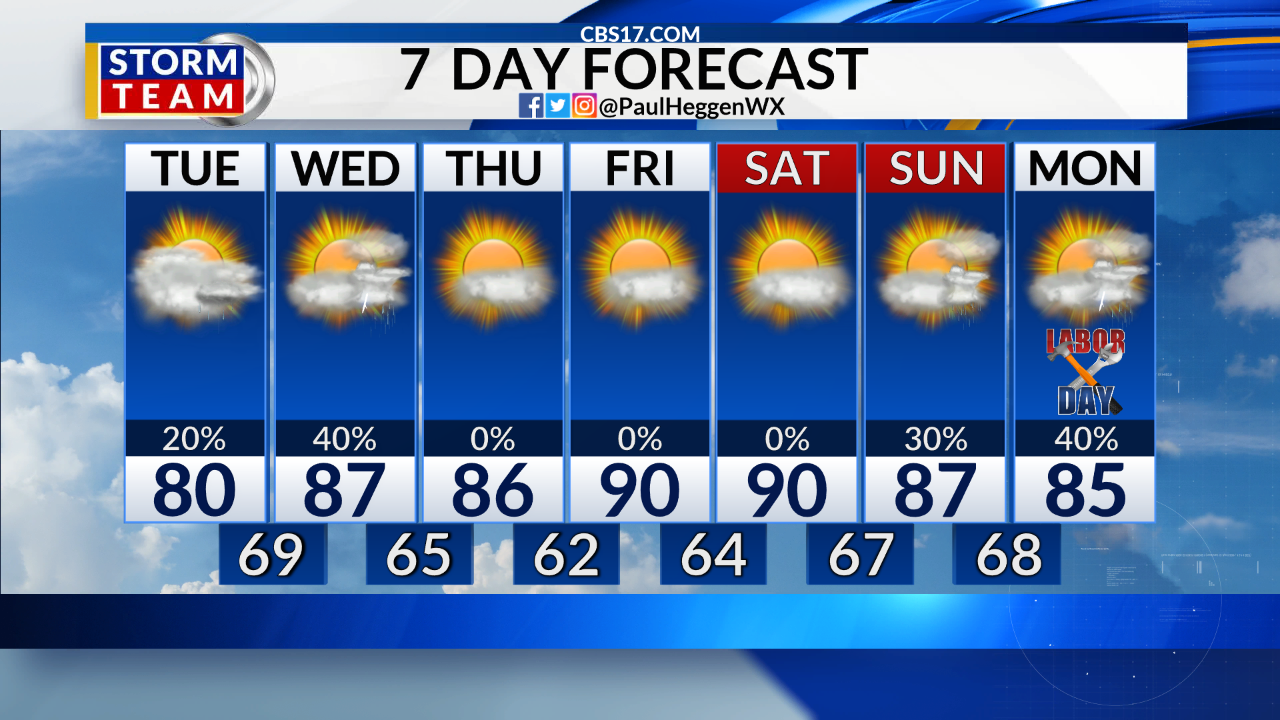 The increasing rain chances Sunday and Labor Day are far from etched in stone — some of the long-range data indicates the chance for some of Tropical Storm Dorian’s moisture to sneak up towards us, but that could go either way.

Speaking of Dorian, it’s still a tropical storm this morning as it moves from the tropical Atlantic into the Caribbean: 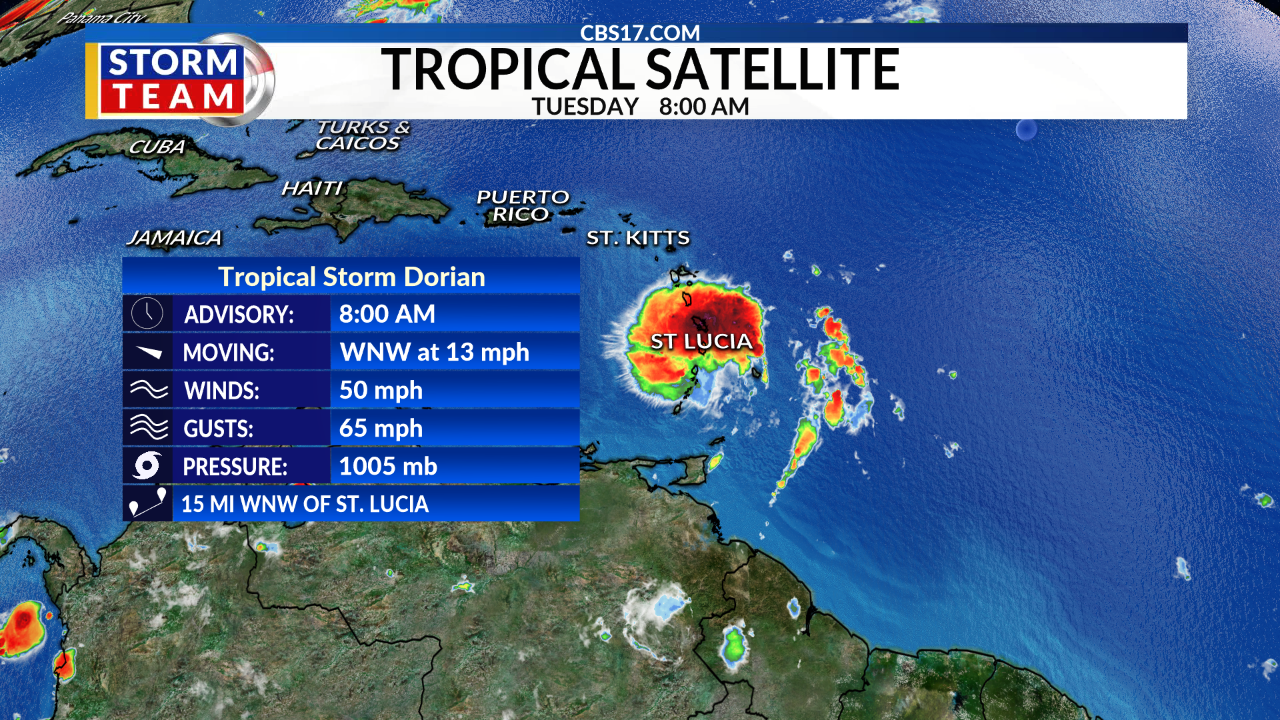 It’s going to encounter an area of pretty strong wind shear over the next 24 hours, as it moves to the west-northwest. The forecast path of the storm is the white line on this map, with higher wind shear indicated by the red contours: 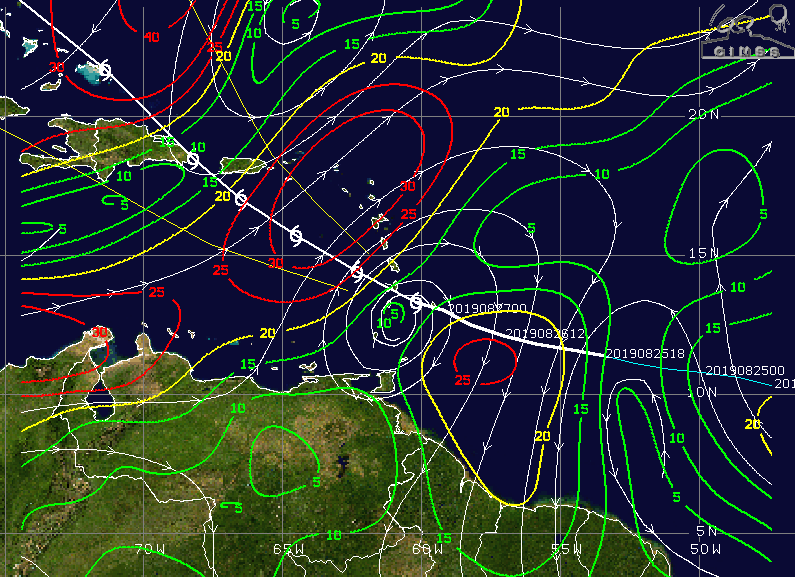 Despite those unfavorable conditions, the National Hurricane Center’s latest forecast shows Dorian gradually strengthening as it approaches Puerto Rico and the Dominican Republic: 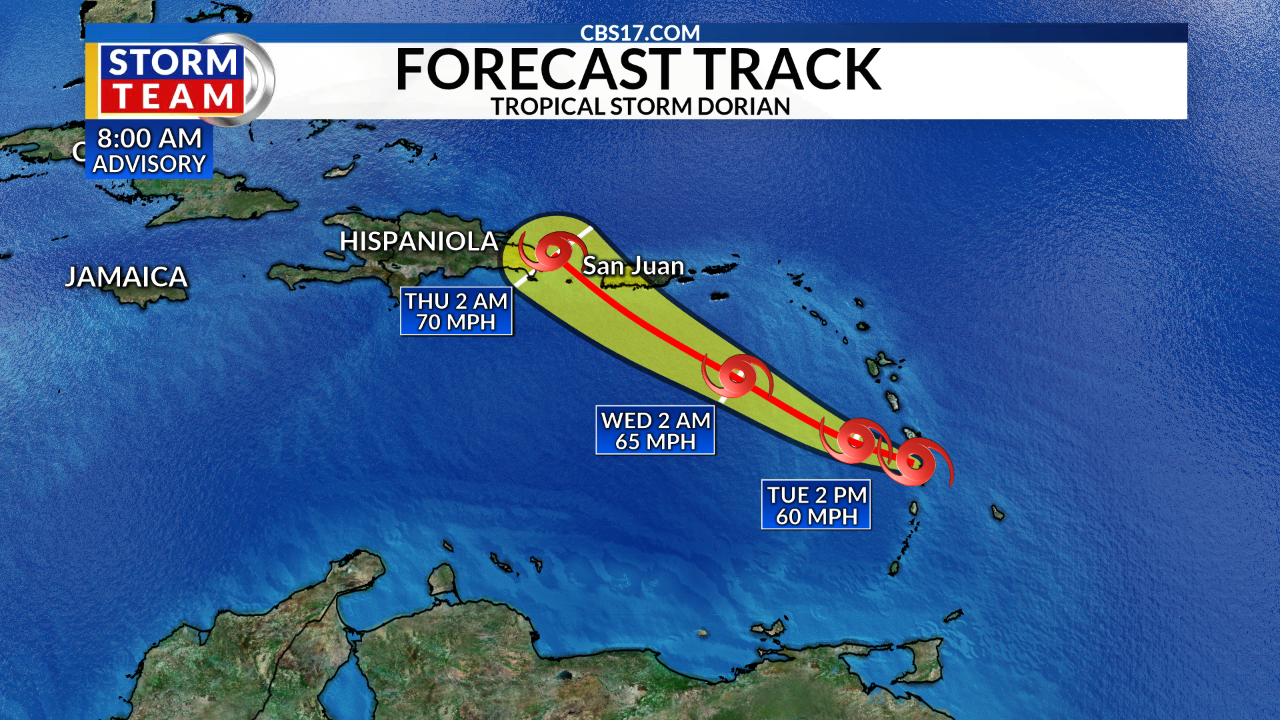 That latest NHC forecast now keeps Dorian just below hurricane strength, but it will still bring torrential rain and the potential for mudslides to both island nations. As Dorian tracks through the Bahamas late this week, it will be moving over some bathtub-warm water: 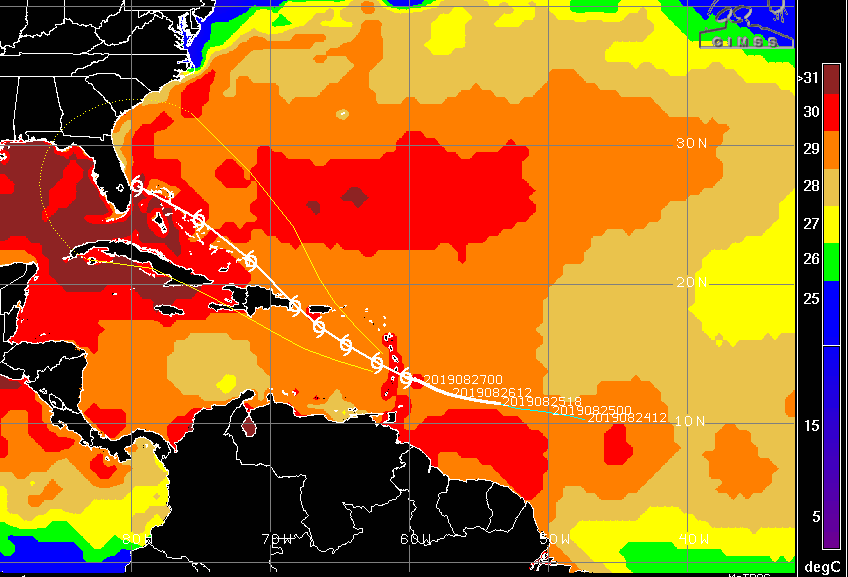 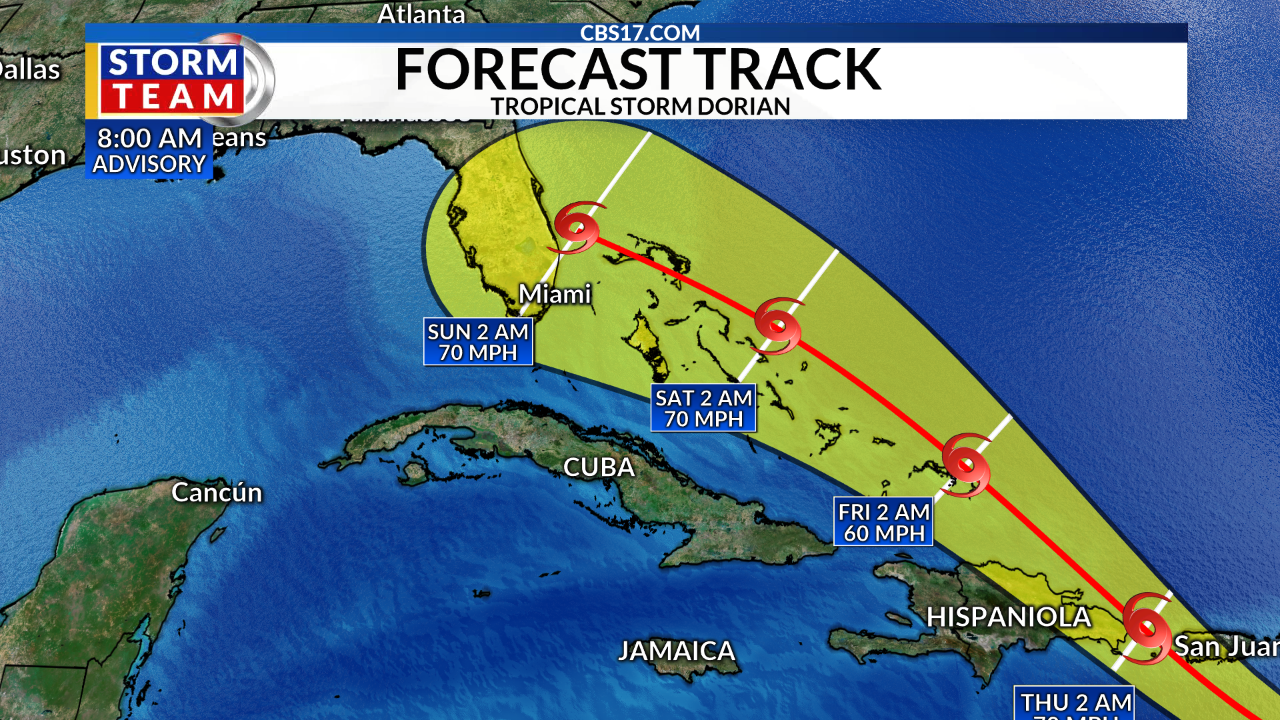 The various forecast models are in very good agreement regarding the accuracy of the NHC’s forecast path: 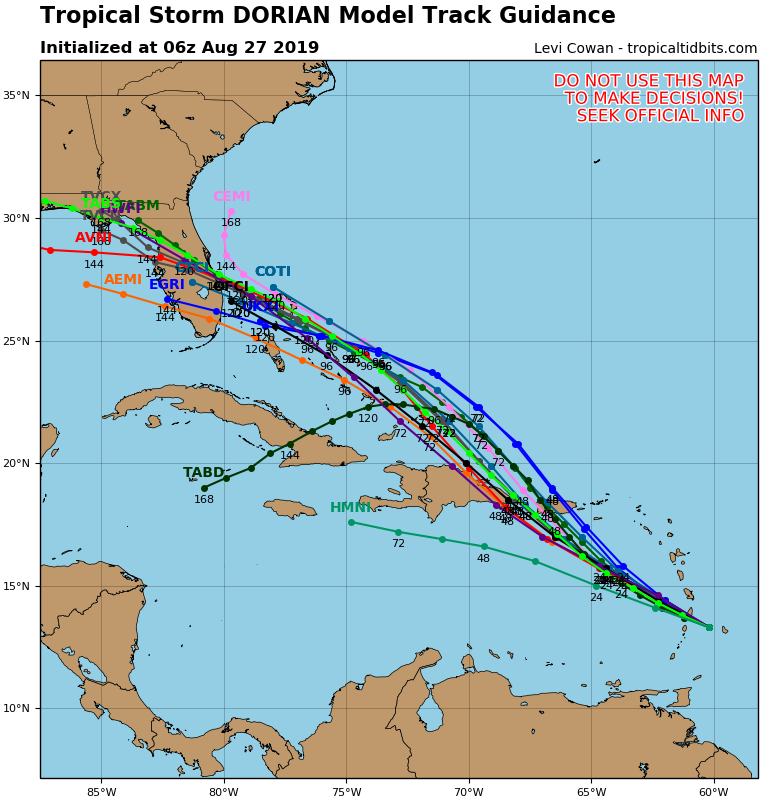 But the intensity of tropical systems is usually the harder thing for us to predict. The wild card in this case will be wind shear — if it’s strong enough, the storm won’t be able to become a hurricane. But with that warm water (and not enough land mass in the Bahamas to disrupt the storm), further intensification is very possible.

Regardless of how much Dorian strengthens, it doesn’t look like the storm itself will have a direct impact on our weather in central North Carolina. The European forecast model does show an increase in moisture Sunday into early Monday, thanks to the large-scale movement of the atmosphere around Dorian…but then the bulk of that moisture gets pushed back down to the south:

That’s one version of one forecast model, of course — we’re going to keep a close eye on Dorian over the next several days. In the short term, I’d re-think any travel plans to Florida over Labor Day weekend!

One more weather item — another tropical system that’s actually MUCH closer to us compared to Dorian. But Tropical Depression Six is almost stationary, and still pretty disorganized this morning: 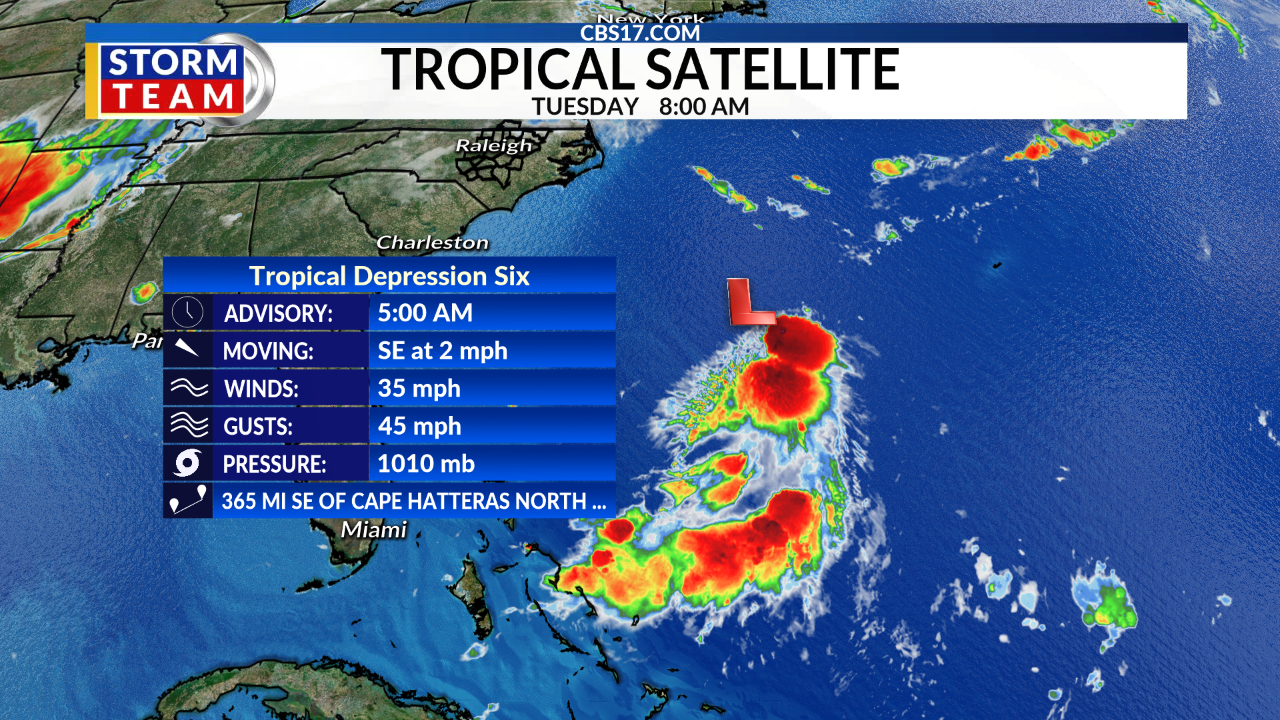 It’s expected to strengthen a bit and become Tropical Storm Erin as it drifts northward today — that northward motion will really accelerate tomorrow and Thursday: 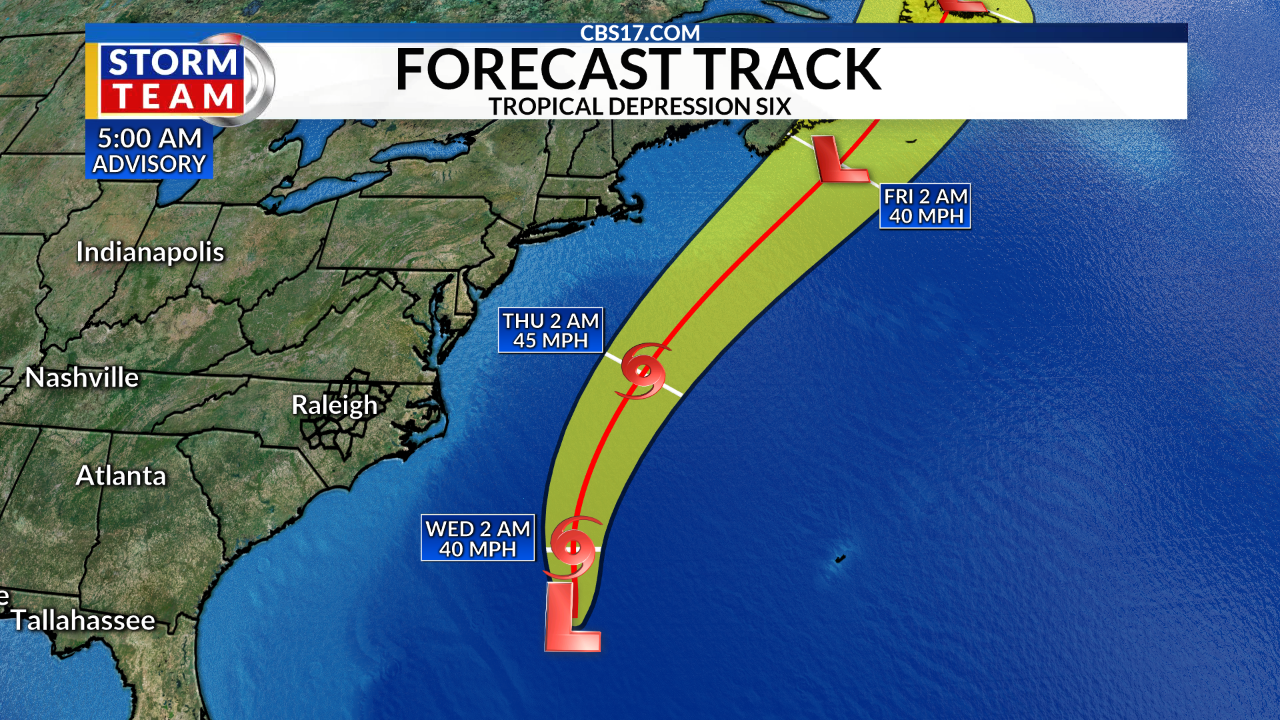 The storm’s only impact on the U.S. coastline will be the increased risk of strong rip currents. The maritime provinces of Canada will have to worry about some high surf, gusty winds and heavy rain this weekend.

RALEIGH, N.C. (WNCN) -- Weather forecasters warned there was a chance of snow Saturday -- even though it was well above freezing -- and they were right.

Some heavy snow was seen around mid-afternoon at Hyco Lake in Person County. There were also a few flakes mixed with rain in Raleigh around 2:30 p.m.

Both NASA and NOAA have concluded that 2020 was one of if not the hottest year on record.

NASA’s data shows 2020 as the hottest year on average. NOAA’s data has 2020 only 0.04 degrees Fahrenheit cooler than 2016, which held the previous record for hottest year.

2020 ties for the warmest year on record, according to NASA

After allergic reactions at 1 clinic, California pauses use of large batch of Moderna vaccine

Biden to prioritize legal status for millions of immigrants

Italian PM Conte seeks to save his government from falling

Dancing trucker turns up at inauguration protest to promote peace

Small numbers of protesters gather at fortified US capitols

Two teens fatally shoot each other in Louisiana

Navalny’s arrest adds to tension between Russia and the West

The Latest: WHO: ‘Not right’ to vaccinate young before old

Moderna reveals how long its COVID-19 vaccine may last