We started off with a few light showers this morning, thanks to the humidity that steadily increased over the last 24 hours. But the August sunshine is already burning through the leftover clouds, and temperatures will warm well into the 80s this afternoon: 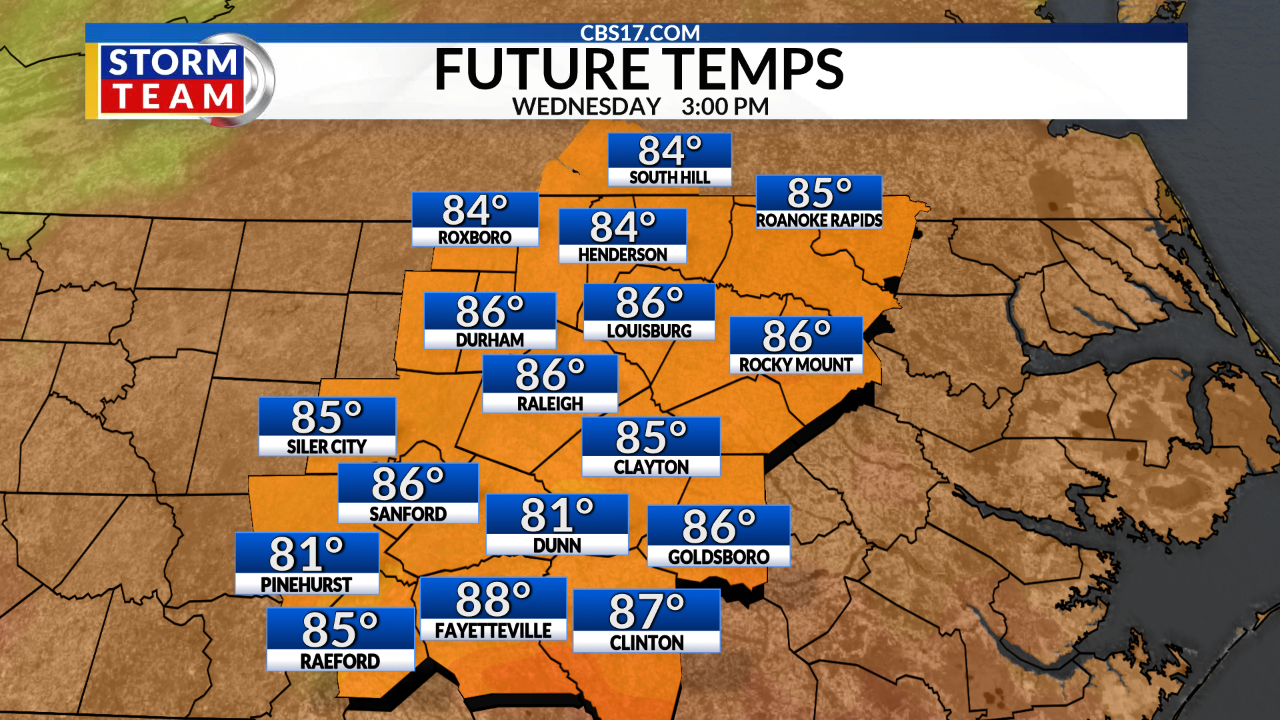 A few showers will pop back up this afternoon, but they’ll be pretty few and far between: 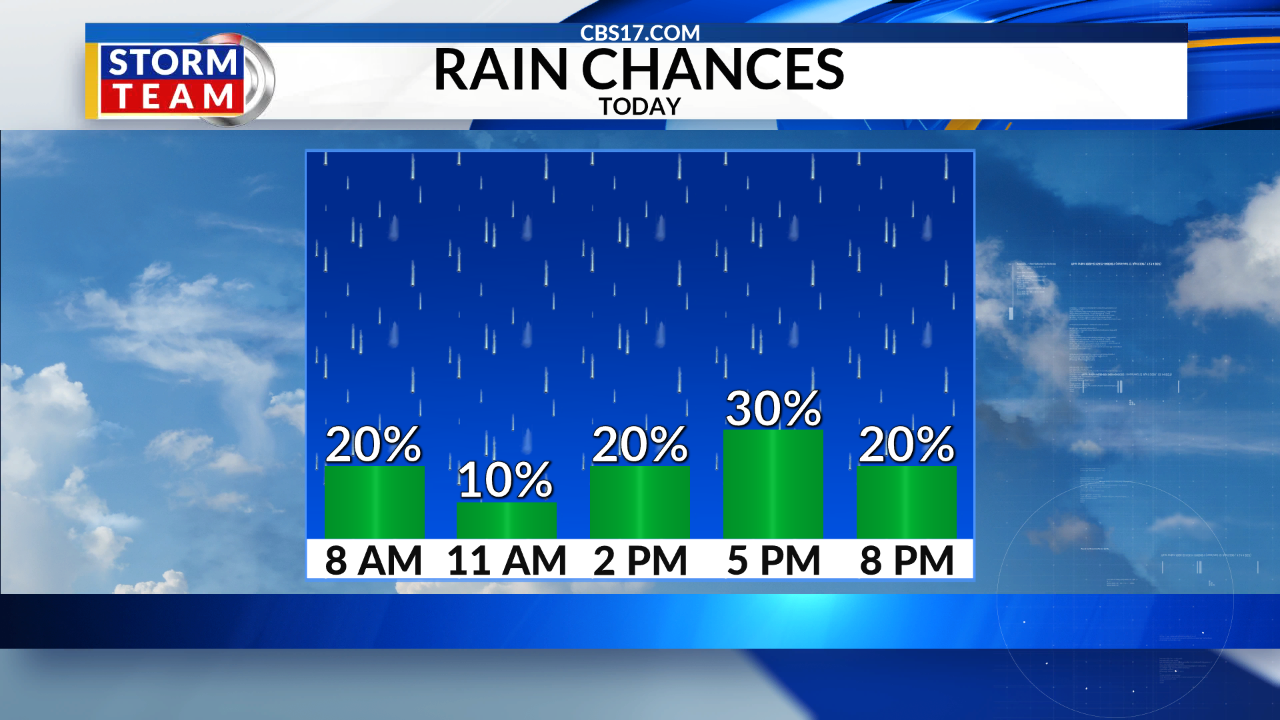 The HRRR model’s radar simulation from 10:00am through 10:00pm is thoroughly unimpressed with our rain chances:

Today’s humidity isn’t pleasant, but a significantly drier air mass will move in tonight — we’ll stay (mostly) on the lower half of the Muggy Meter until Sunday: 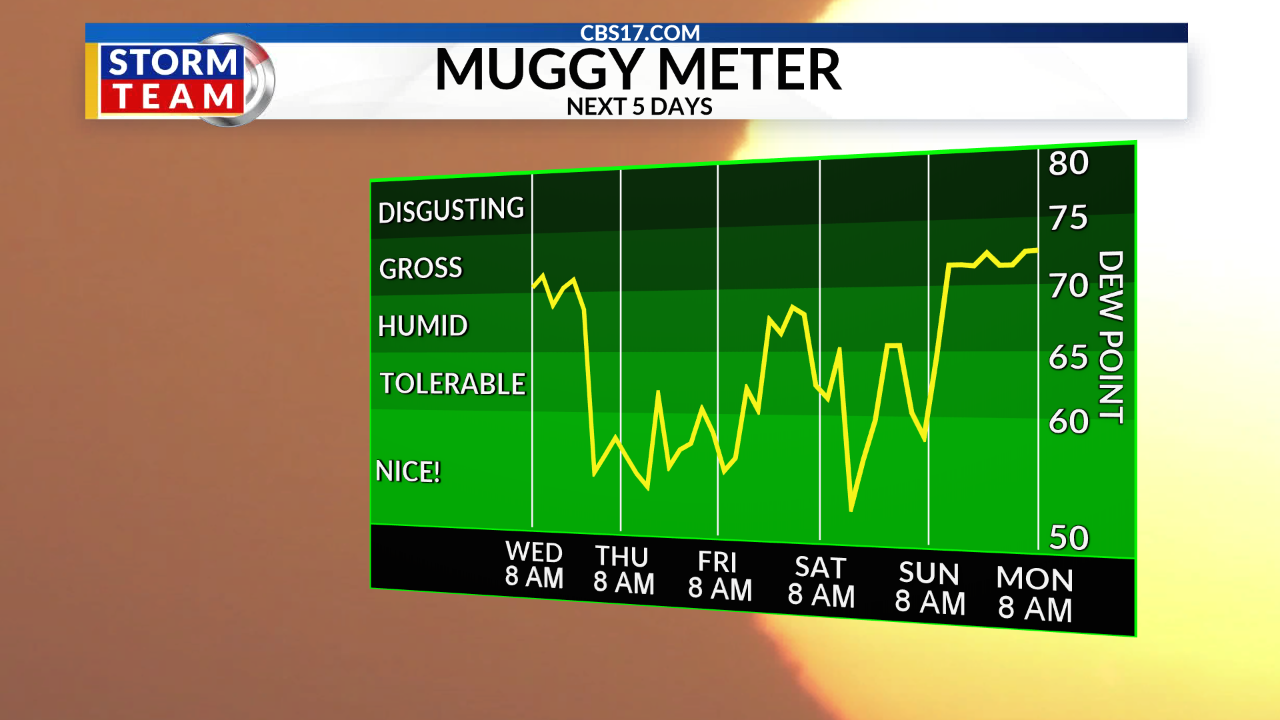 Dry weather prevails from tomorrow into the first day of Labor Day weekend, then things get…complicated: 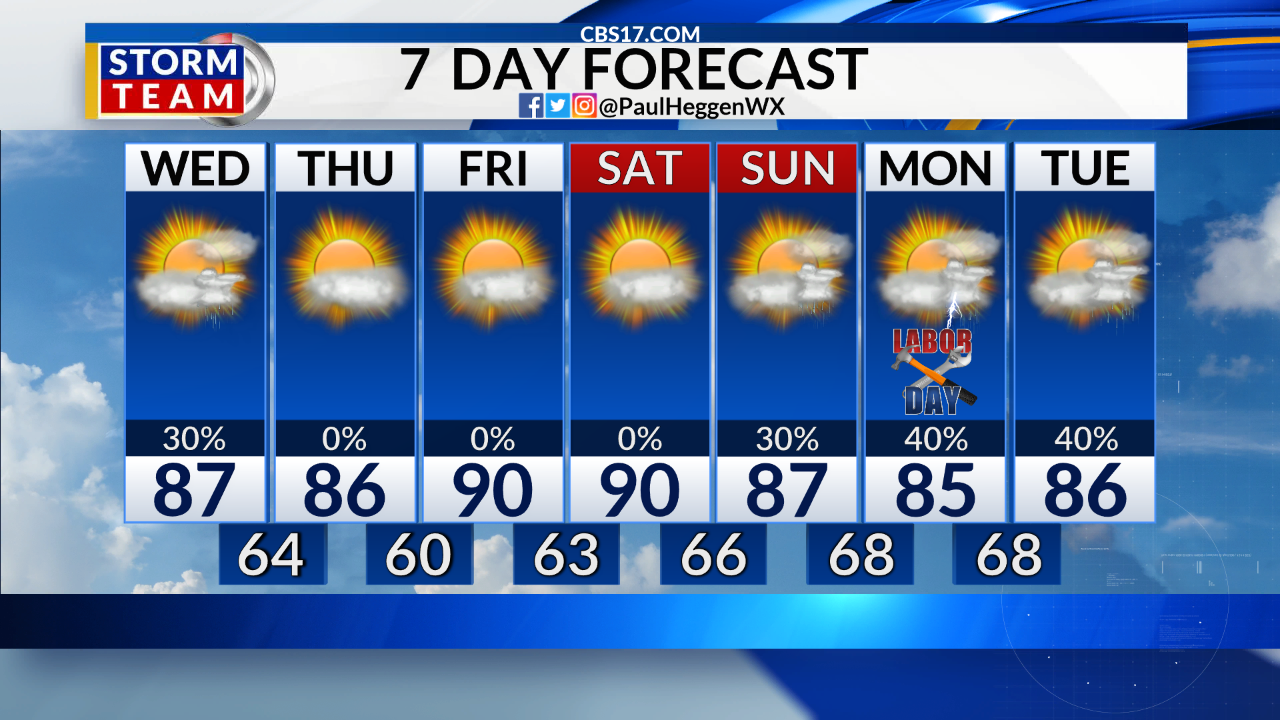 Sunday and Monday will bring us enough humidity to fuel some scattered showers or storms, but the long-range forecast largely hinges on how Tropical Storm Dorian behaves.

Tropical Storm Dorian is still making its way through the Caribbean, and will pass over Puerto Rico later today: 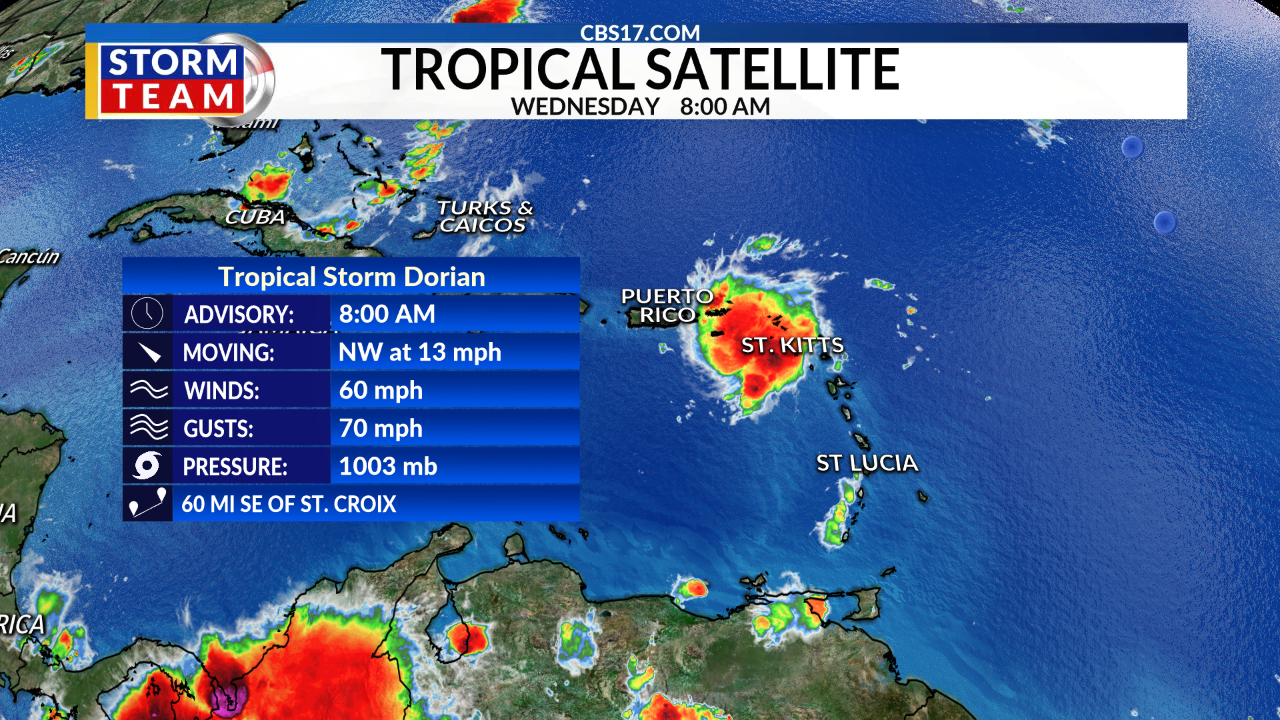 The latest forecast from the National Hurricane Center is north of previous forecast tracks, and shows Dorian becoming a hurricane by tomorrow night: 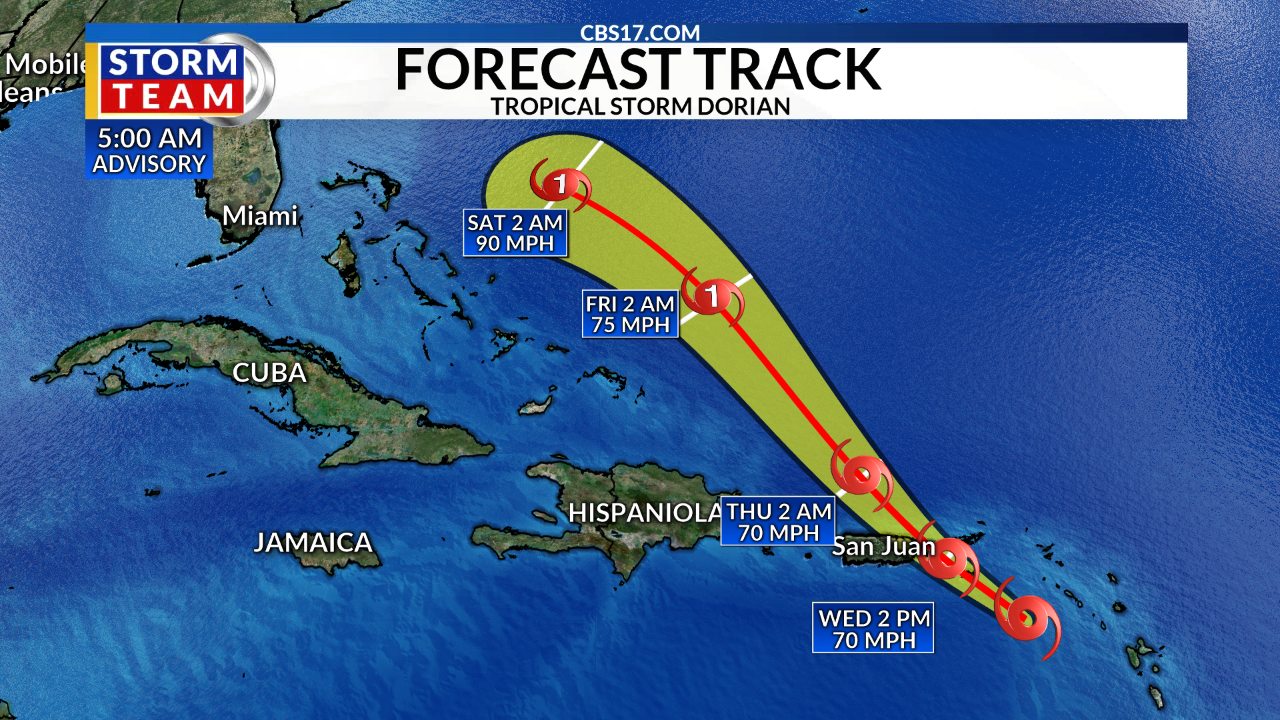 The northward shift in the projected path means that Dorian will avoid interacting with the Bahamas, and should avoid any strong wind shear that would disrupt further intensification. The warm water in the southwestern Atlantic will provide the fuel for Dorian to strengthen further: 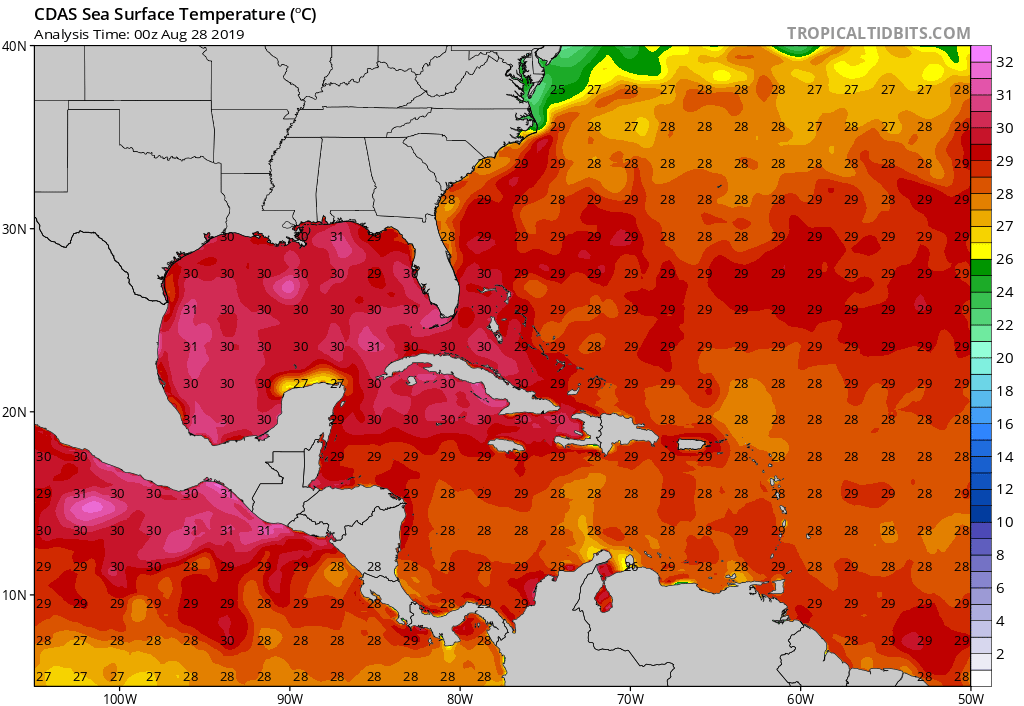 The NHC anticipates that Dorian will approach Florida over the weekend, still as a hurricane: 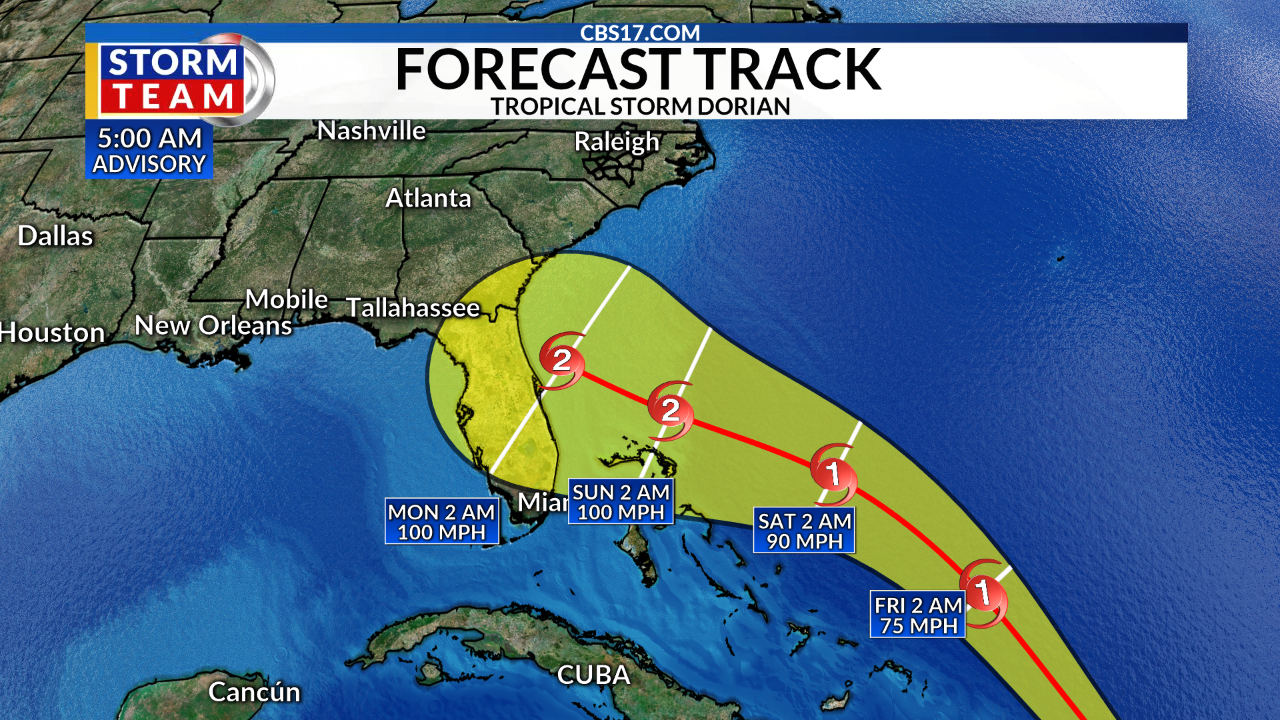 The “cone of uncertainty” is wide at that point, and the range of possibilities from the forecast data is even wider. The majority of computer models follow the NHC’s path toward the Florida coast, but a few are now showing a northward curve (image from TropicalTidbits.com): 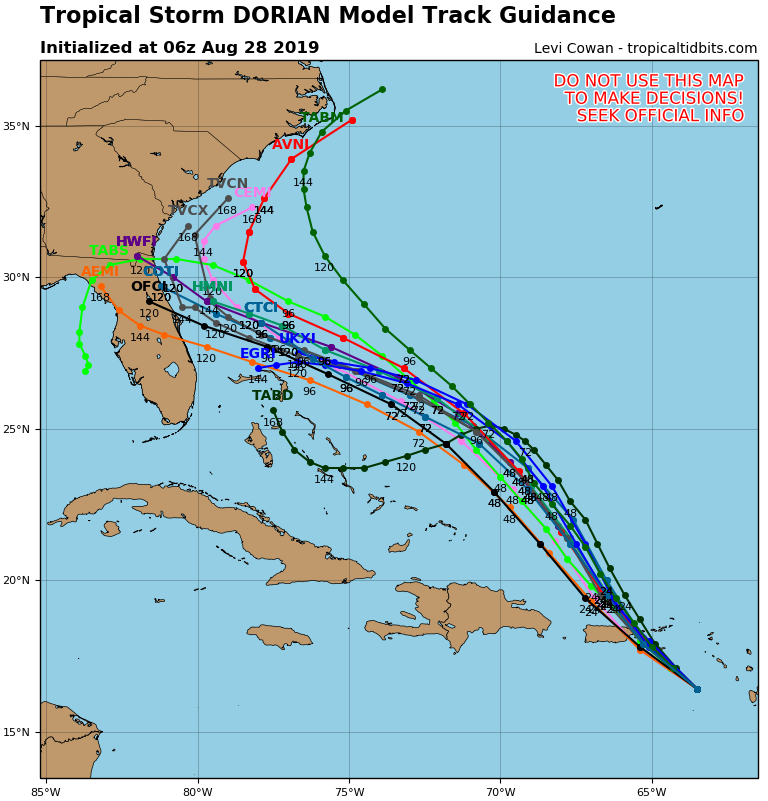 The forecast models are also showing significant disagreement regarding how much Dorian will strengthen later this week: 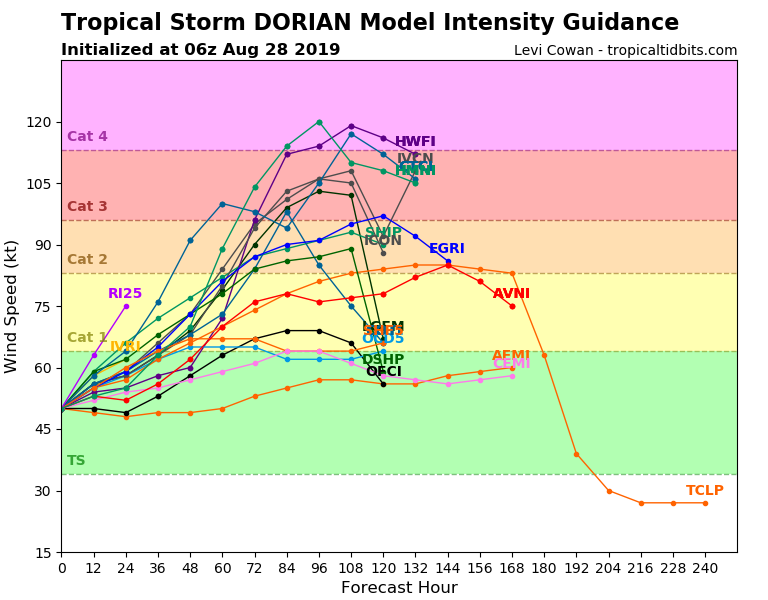 Let’s focus on just the European forecast model’s ensemble — it’s the same model run dozens of times with slightly different conditions, to give us a range of possibilities. The “spaghettios” plot from that model shows the position and intensity of Dorian from those dozens of model runs — the potential tracks range from Key West to Hatteras, and the potential intensities range from tropical storm to major hurricane:

Frustrating? YUP. I’d love to be able to give you a confident forecast of “this is where it’s going, this is how strong it will be,” but the data is just all over the place right now. EVERYONE from the Outer Banks to the Florida Keys should be paying attention to this storm over the next several days. It’s likely that some of the moisture associated with Dorian will eventually make its way into central North Carolina next week, but any potential direct impact for the Carolina coast is purely speculative at this point. We’ll keep you updated with the latest information as we head into the holiday weekend…

This story highlighting Sunday's hurricane developments is no longer being updated. Get the latest update here.

OKLAHOMA CITY (AP) — Tropical Storm Beta on Sunday was making a slow crawl to the shores of Texas and Louisiana, casting worries about heavy rain, flooding and storm surge across the Gulf Coast.

OKLAHOMA CITY (AP) — An exceptionally busy Atlantic hurricane season was churning along Saturday as the Texas coast prepared for a tropical storm that could strengthen into a hurricane before breaching its shores in the week ahead.

The Atlantic’s record-breaking “crazy” hurricane season got a bizarre European remake Friday as forecasters ran out of traditional names and trotted out the Greek alphabet for subtropical storm Alpha. And it was misplaced geographically, bearing down on Portugal.

This is only the second time National Hurricane Center forecasters have had to pull out the Greek alphabet for names, with the last time being 2005. Tropical Storm Wilfred, the last of traditional names, officially formed little more than an hour before Alpha, prompting the hurricane center to tweet “get out the Greek alphabet.”

Report: Canadian woman suspected of sending ricin to Trump had been deported from South Texas

Alone among nations, US moves to restore UN Iran sanctions

Biden to make in-person campaign appearance in Charlotte on Wednesday

Justice Ginsburg to lie in repose at the Supreme Court & U.S. Capitol

330 elephants in Botswana may have died from toxic algae

Ginsburg’s body will lie in repose at Supreme Court

Biden to make in-person campaign appearance in Charlotte on Wednesday