Widespread storms on Monday dropped a lot of rain, and that led to the development of some dense fog this morning. That’s burning off as I type these words, and temperatures will heat up. Highs will reach the upper 80s to around 90° this afternoon: 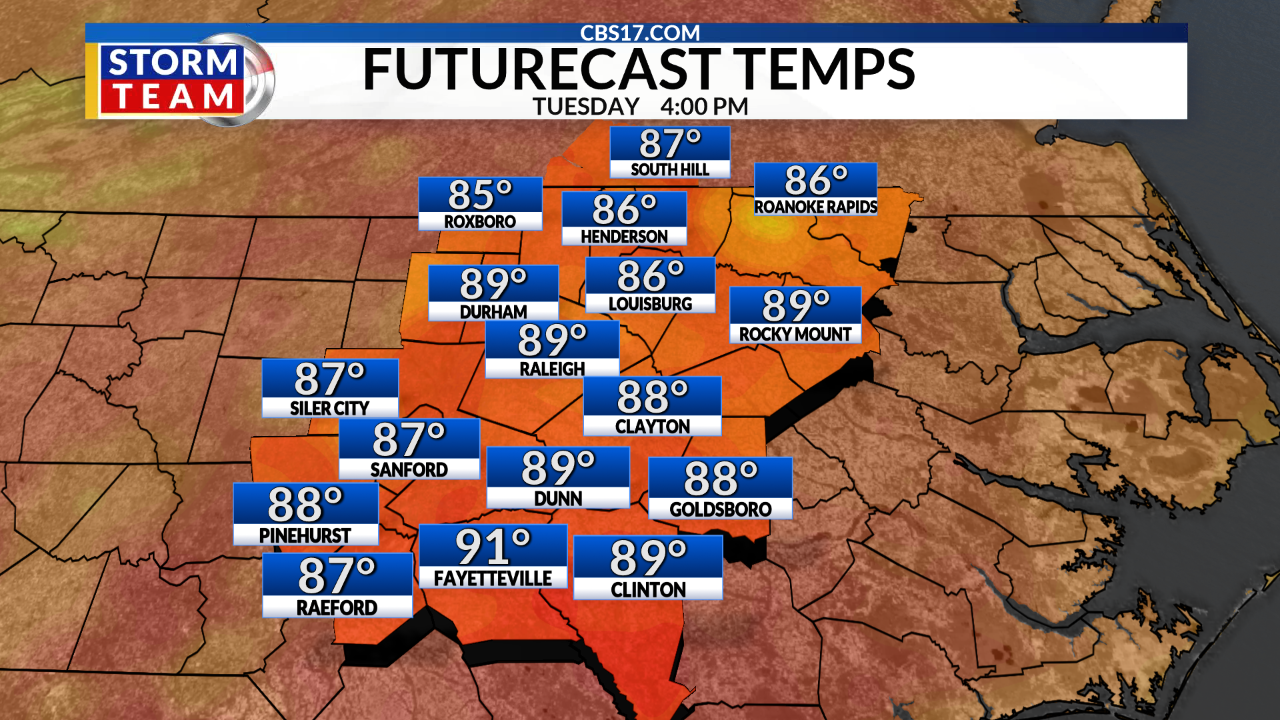 Despite the humidity, today’s storm chances will be quite a bit lower than the past couple of days. The HRRR model’s radar simulation from noon through midnight just shows a few “radar freckles”:

With much rain-cooled air from those isolated storms, temperatures will only drop to around 70° by early Wednesday morning: 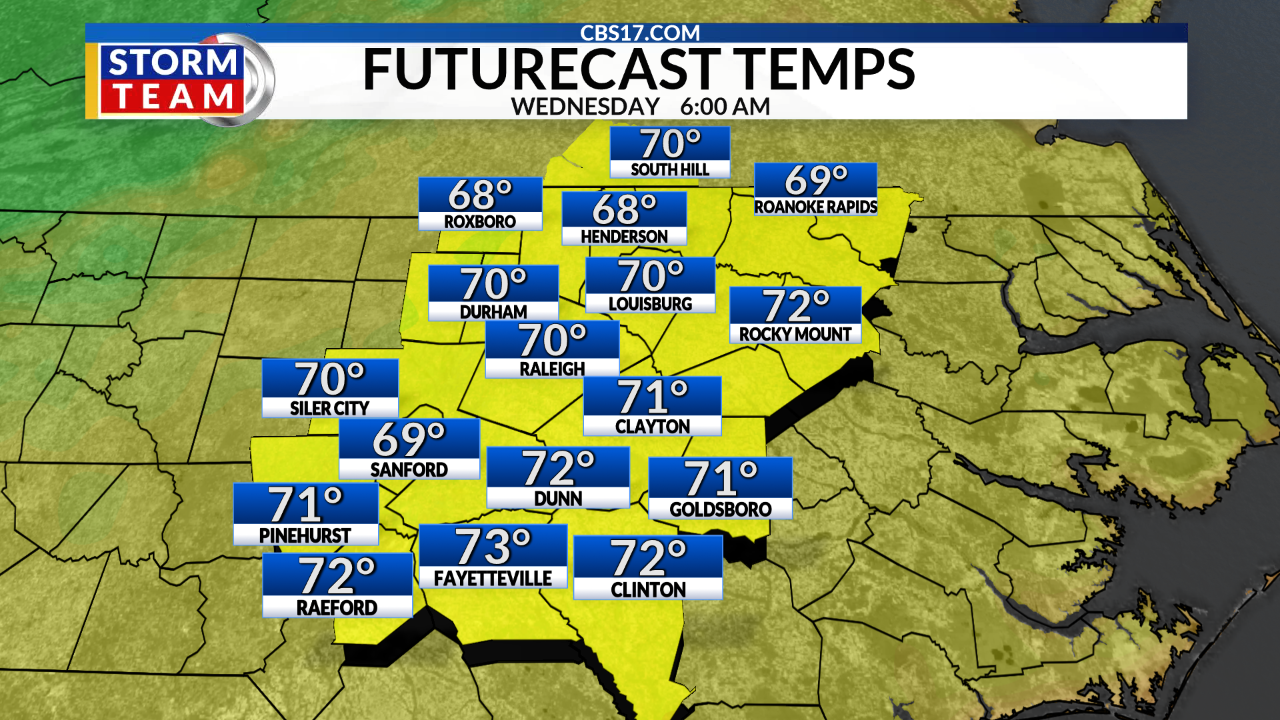 We’ll heat up even more on Wednesday, with highs reaching the low to mid 90s: 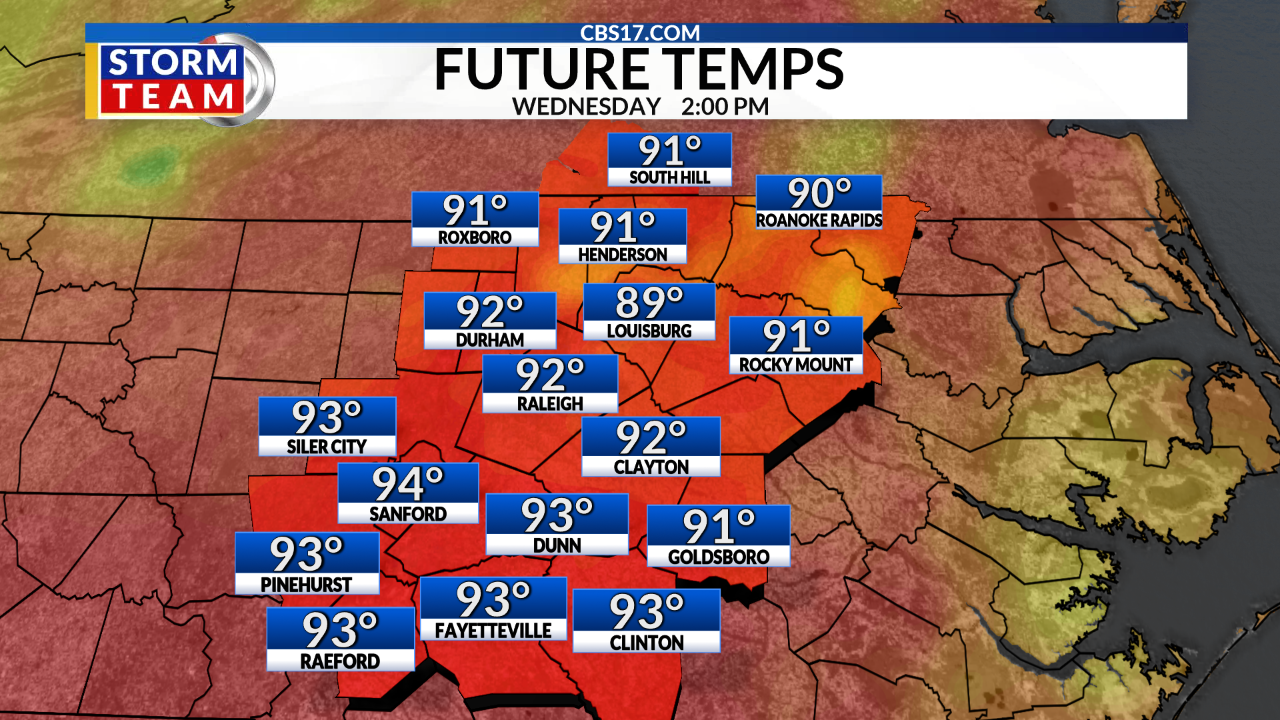 The heat index will likely approach 100°, especially in our southern counties: 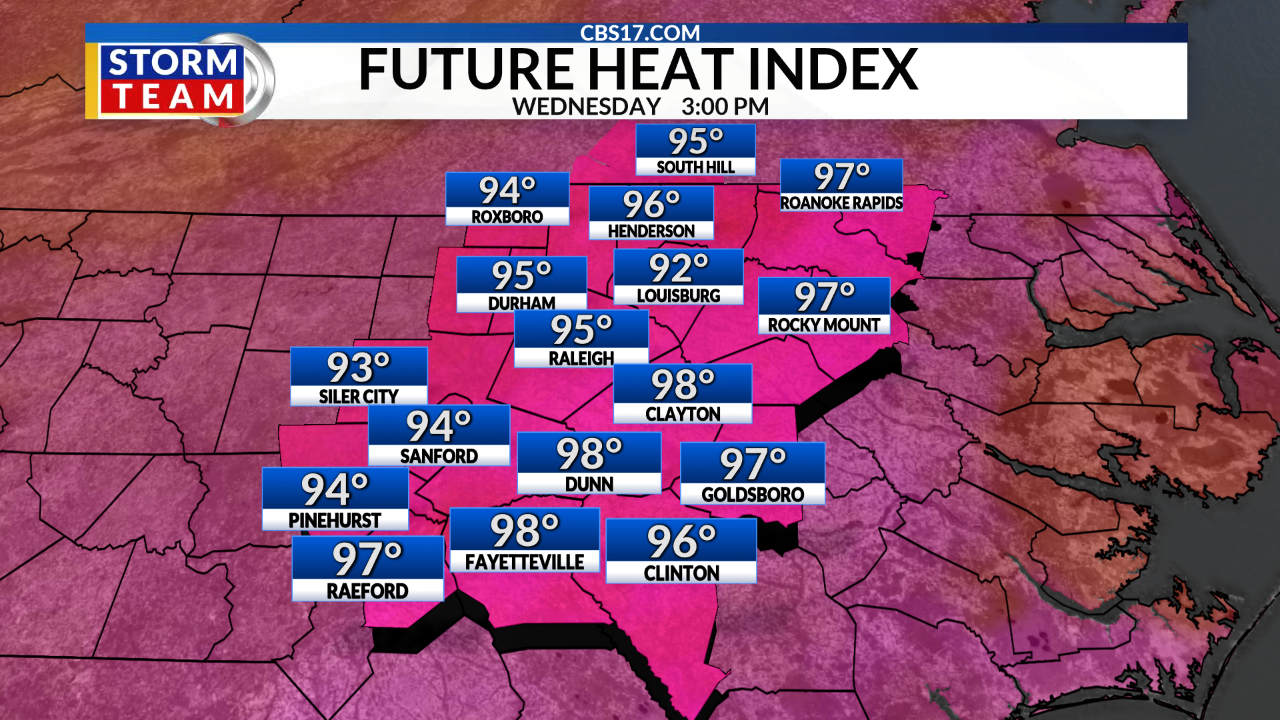 Like today, we could see an isolated storm pop up in the afternoon, but we’re mainly focused on a chance of stronger storms late in the day. The North American Model’s simulation shows that activity rolling in from the west by Wednesday evening:

Within that line of storms, we could see a few damaging wind gusts around 60 MPH. The Storm Prediction Center has included all of central North Carolina in a “Marginal Risk” (level 1 of 5) of severe weather: 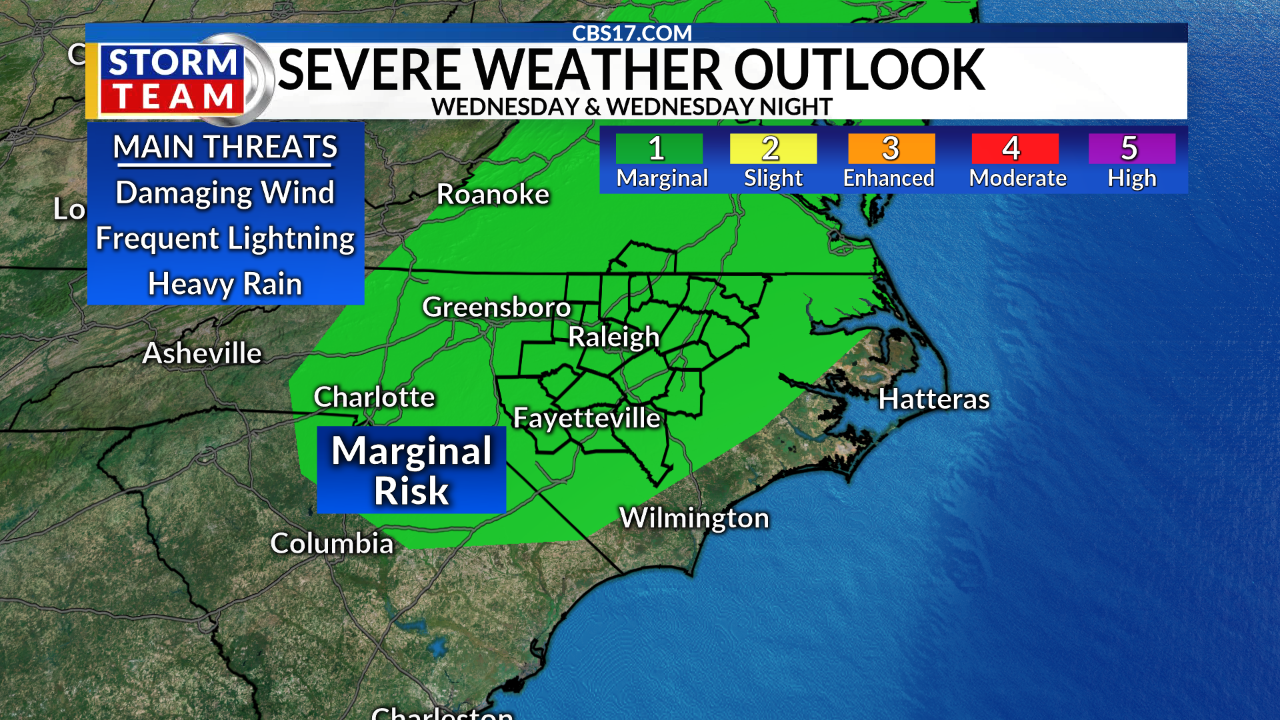 The SPC’s forecast model estimates roughly a 30% chance of storms with severe characteristics in that time frame, which seems reasonable:

It’s far from an off-the-charts threat, but we’ll keep a close eye on it tomorrow!

After Wednesday’s storms move out, lower storm chances and hot temperatures will take over for the rest of the week and into the weekend. We’ll get a couple of breaks from the humidity, but tracing the ups and downs on the Muggy Meter could give you whiplash: 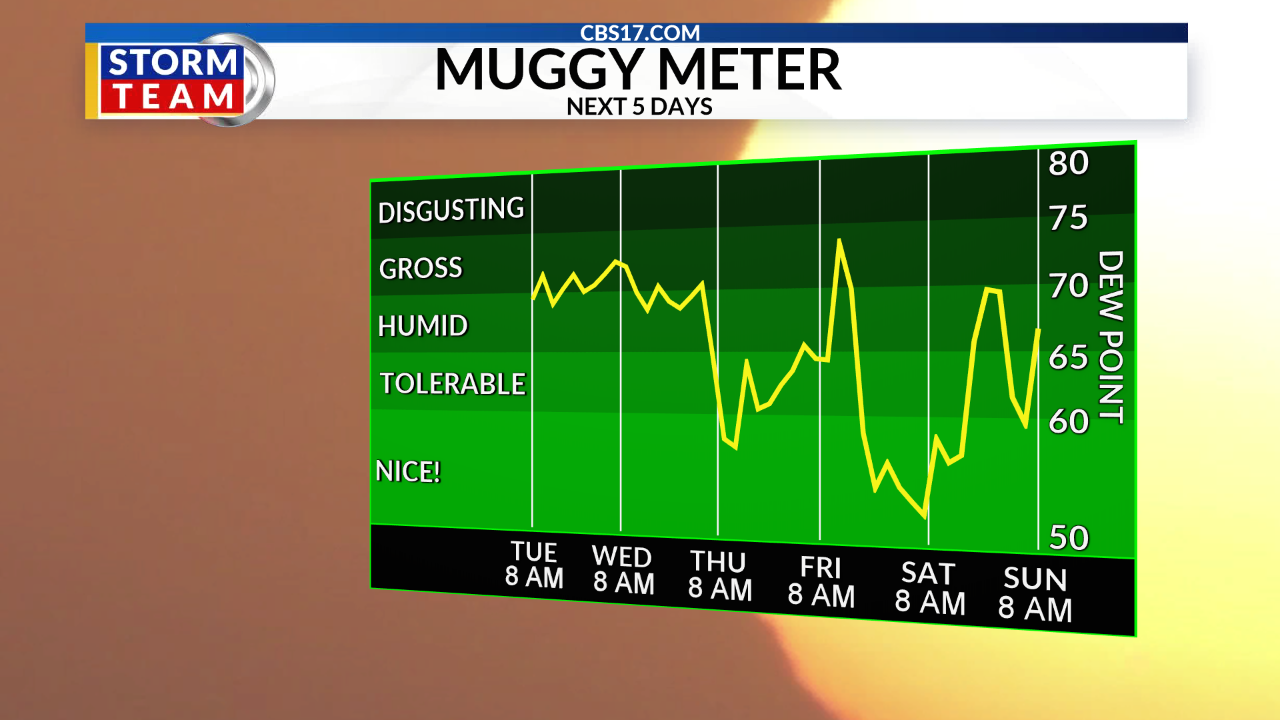 I can’t rule out an isolated storm on any particular day, but the bigger story will be heat, all the way into early next week: 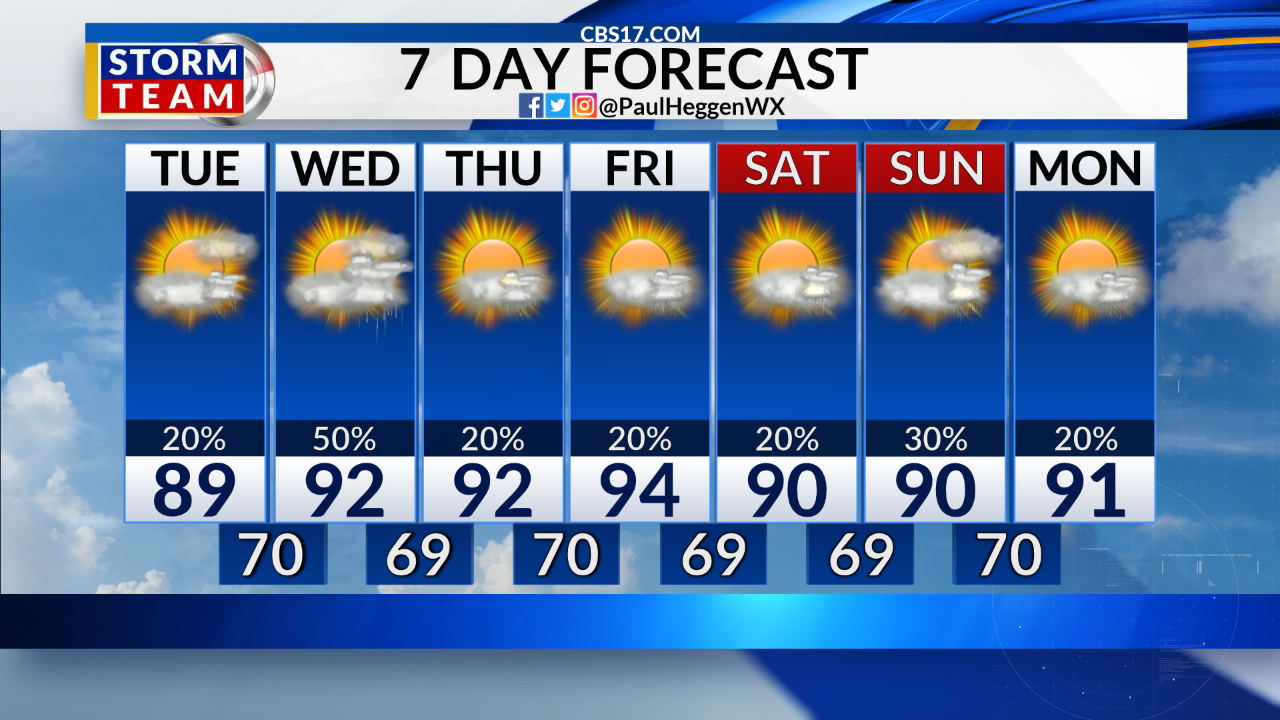 Tracking the Tropics: System has 70% chance of developing in or near Gulf of Mexico

TAMPA, Fla. (WFLA) -- The National Hurricane Center is keeping a close eye on a broad area of low pressure that could move closer to Florida and develop in the coming days.

The area is just west of Grand Cayman Island and, according to NHC forecasters, is gradually becoming better defined.

RALEIGH, N.C. (WNCN) - Epsilon has rapidly intensified into a major Category 3 hurricane on Thursday with winds of 115 mph.

The National Hurricane Center's 5 p.m. update shows Epsilon will make its closest approach to Bermuda on Thursday afternoon or evening.

As of 11 p.m. Tuesday night, the hurricane was 545 miles east-southeast of Bermuda with 75 mph winds. A storm needs winds of 74 mph or greater to be classified as a hurricane.

1 dead in motorcycle crash along S. Saunders St. near I-40 in Raleigh, police say

Asteroid samples escaping from jammed NASA spacecraft: ‘Time is of the essence’

Managing your Mental Health in a Pandemic

Woman dies after being hit by vehicle that left the scene, Raleigh police say