While national attention is focused on the developing tropical system in the Gulf of Mexico, we’re looking at our own chance of strong storms in central North Carolina later today. (Click here for complete details on Tropical Storm Barry.)

Before the best chance of storms arrives, it will be hazy, hot and humid…not exactly a surprise in mid-July! High temperatures will reach the upper 80s and low 90s: 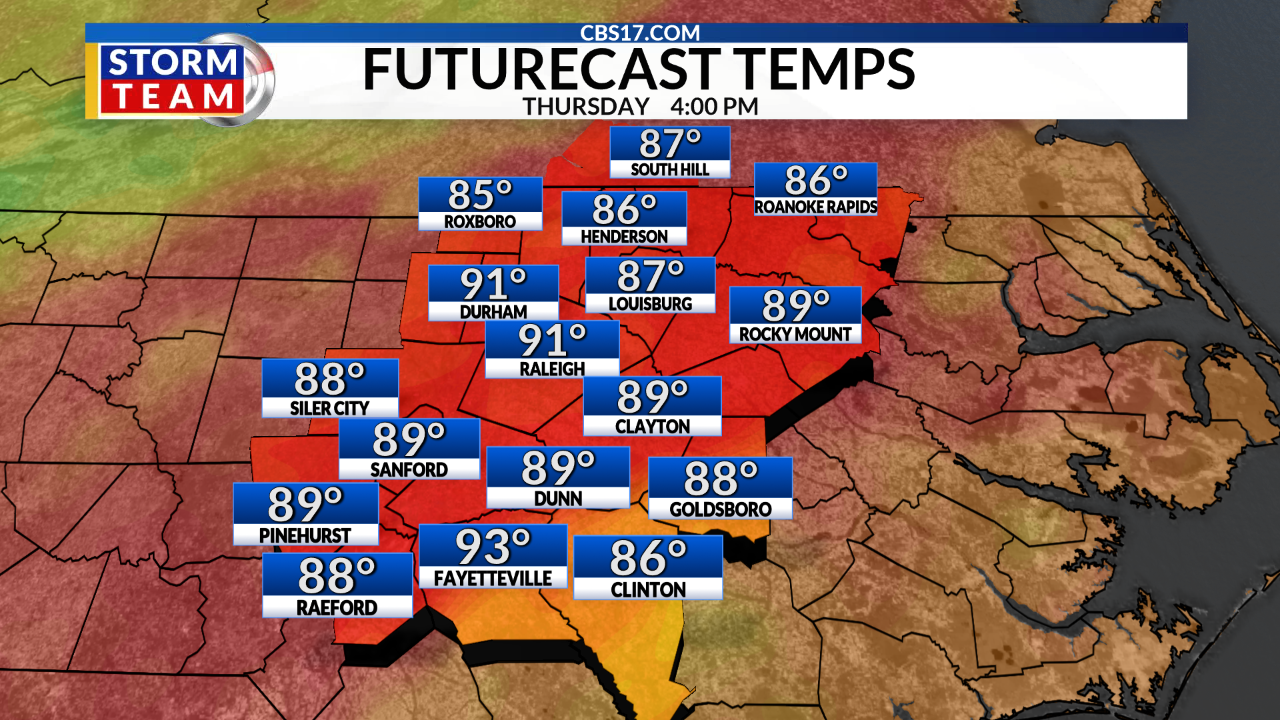 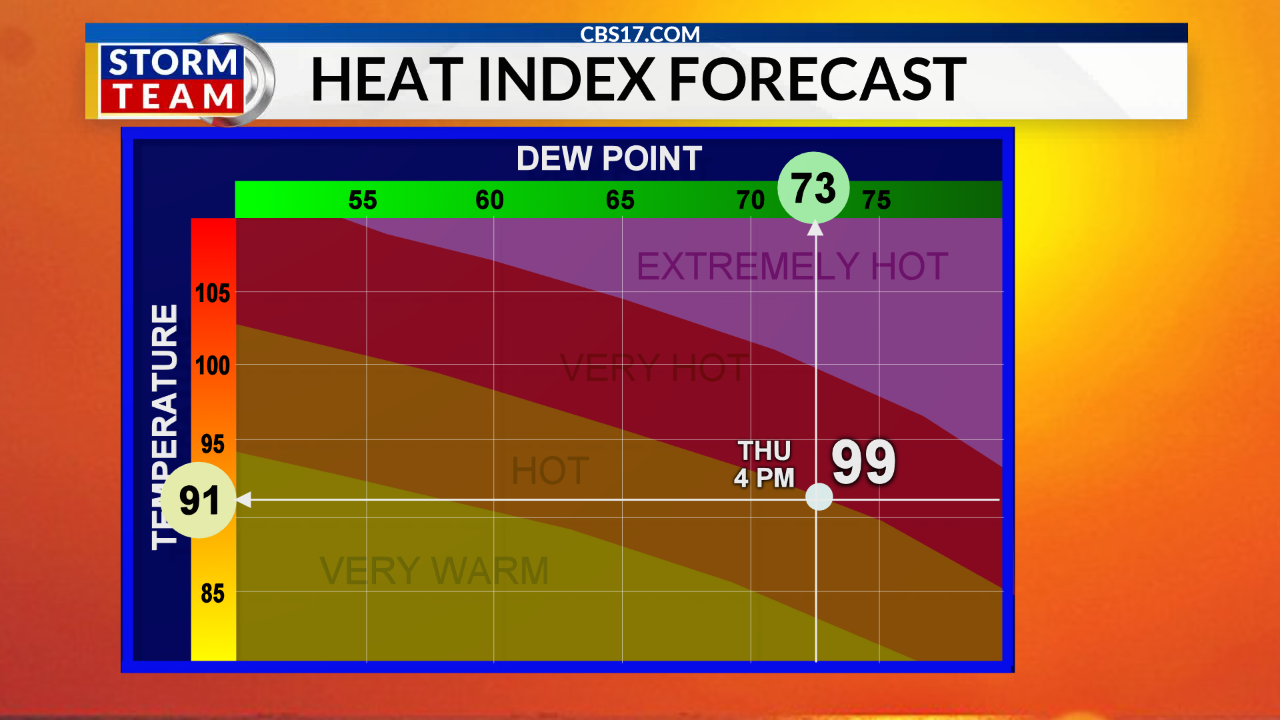 We could see a few storms bubbling up in the heat of the afternoon, which is typical for this time of year. But an approaching storm system will really ramp up our storm chances this evening and early tonight: 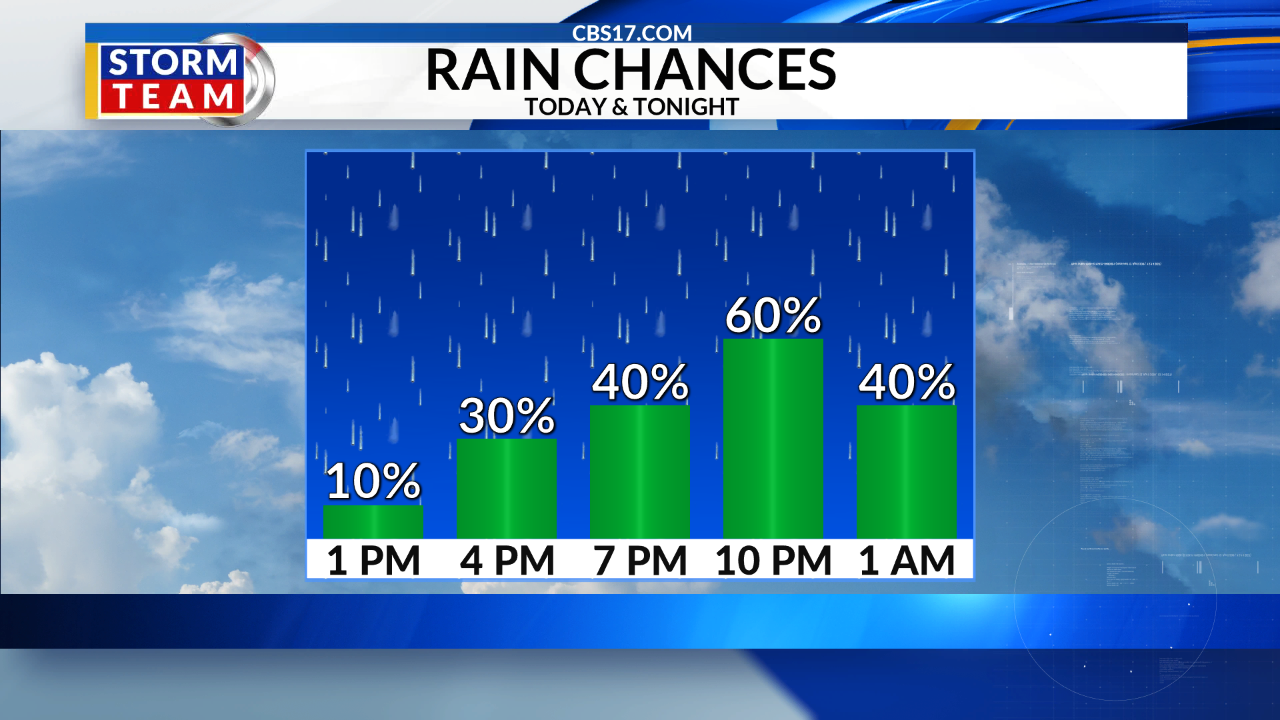 The HRRR model’s radar simulation from noon through midnight shows widespread storms moving in from the west around and just after sunset:

Keep in mind, that’s one version of one forecast model — the storms could easily speed up or slow down by an hour or two, so be flexible with outdoor plans later today. All of the storms will have the potential for very heavy rain and frequent lightning, but the strongest could produce a damaging wind threat. The Storm Prediction Center has outlined a “Marginal Risk” (level 1 of 5) of severe weather for the northern half of central North Carolina: 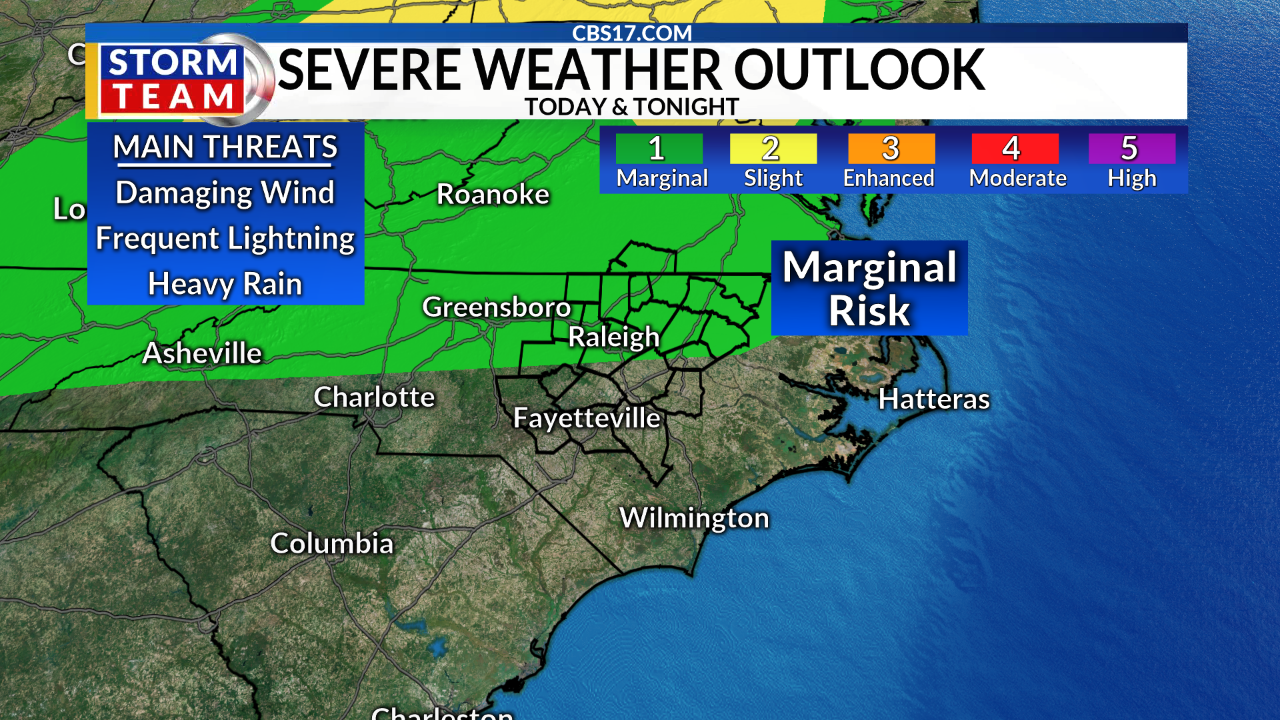 I wouldn’t be shocked if that gets extended to include our southern counties as well. It’s a borderline threat anyway, since the storms will move in after peak heating, but it’s still something we’ll watch very carefully.

Tonight’s storms will eventually diminish, but the storm system that caused them will get “stuck” nearby. So after we warm up to around 90° again Friday… 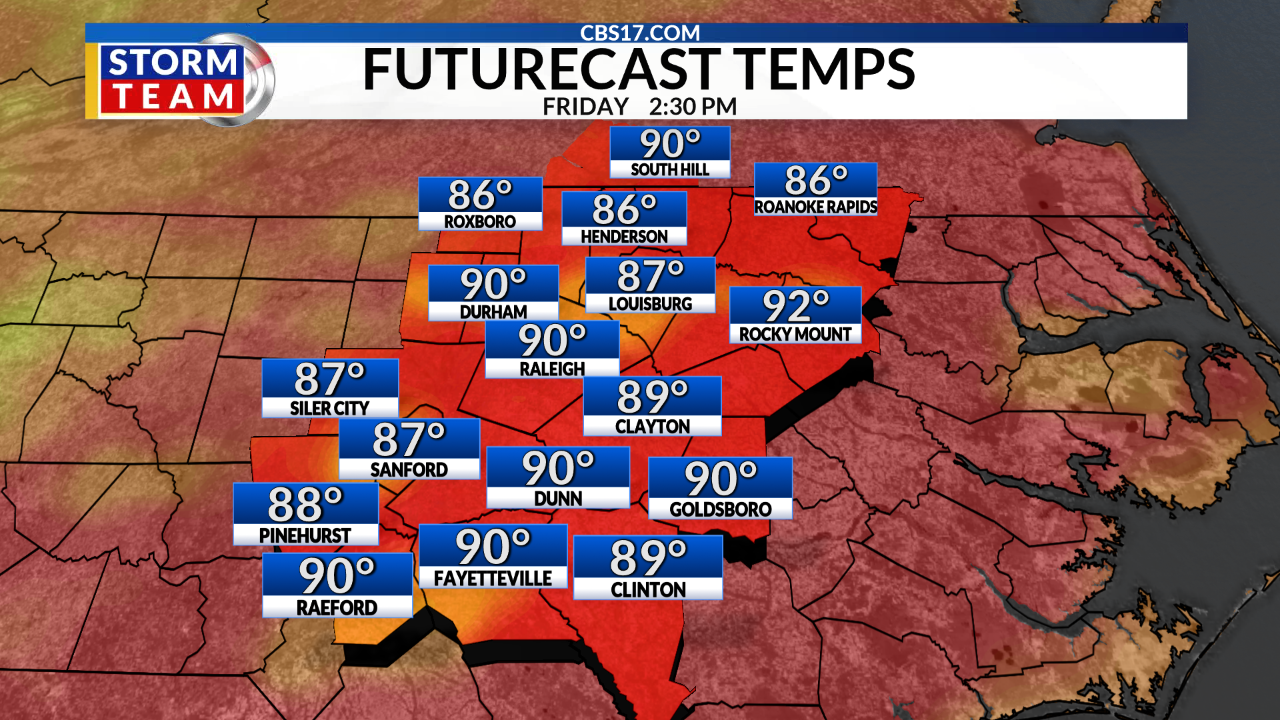 …we’ll see another round of showers and storms. They won’t be as numerous as this evening’s, but the North American model’s simulation from noon to midnight shows scattered activity firing back up in the afternoon and evening:

All of central North Carolina is included in the Marginal Risk for tomorrow: 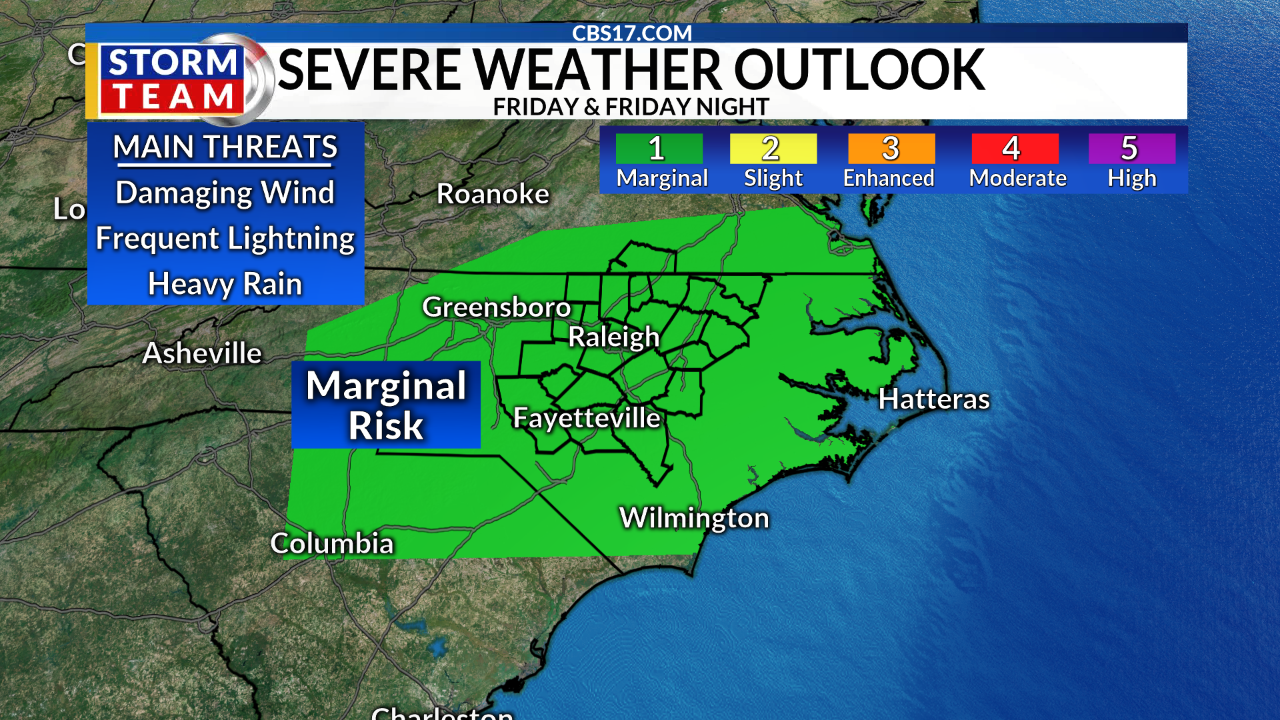 Again, it’s a borderline threat, but something we’ll watch carefully.

The latest forecast data is hinting that the unsettled pattern might linger into Saturday…I’m not quite buying that just yet, so I just bumped up Saturday rain chances to 30%. Hot weather will be the story this weekend, with highs well into the 90s and heat index values at or above 100°: 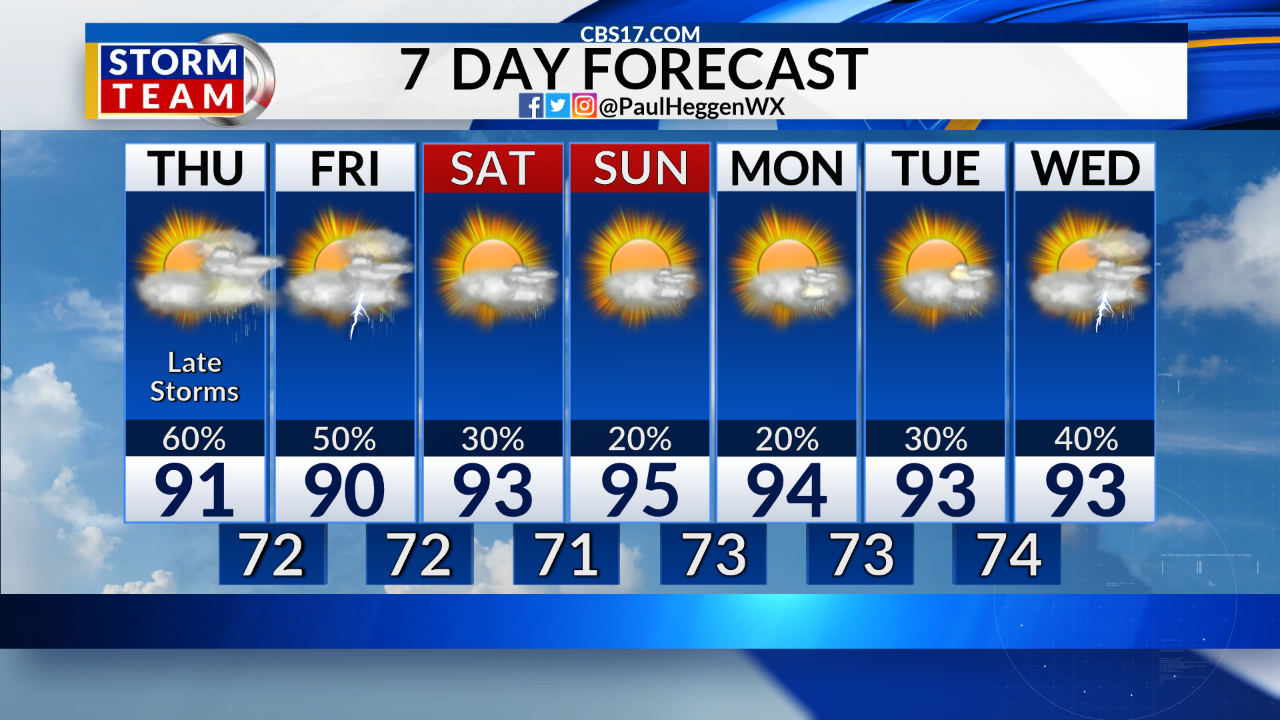 By the middle of next week, we could see the remnants of Barry starting to enhance our storm chances here in central North Carolina.

TEMPE, Ariz. (AP/CBS Newspath) - Police say a woman threatened to stab her husband over an argument about money to move to Japan before officials say she killed their two children with a meat cleaver in a suburban Phoenix apartment.

Tempe police say 40-year-old Yui Inoue remains jailed on suspicion of two counts of first-degree murder. It was unclear Sunday if Inoue has a lawyer yet.

RALEIGH, N.C. (AP/WNCN) -- Major progress in refueling gas stations in North Carolina has helped push the percent of stations without fuel in the state below 60 over the weekend, officials say.

North Carolina has been the worst-ranked state in terms of available gas since the Colonial Pipeline was shut down following a cyber attack on May 7.

Hundreds of bodies found buried along riverbanks of India

A tough sell: In Dubai amid clash, Israel promotes tourism

Arrest made after boy, 4, found slain on Dallas street

Arrests in UK over claims antisemitic abuse hurled from cars

Vaccinated? Here’s how to score some freebies

Durst trial to resume after long delay; will jury be ready?

Gas shortage continues in the Triangle; NC still above 60% of gas stations without fuel

Recovering from fuel shortage ‘will take a few weeks’ in NC, analyst says

What’s the process of getting gas back to stations? Triangle fuel suppliers explain