1:30PM UPDATE: Most of central North Carolina is now under a Severe Thunderstorm Watch until 10:00pm: 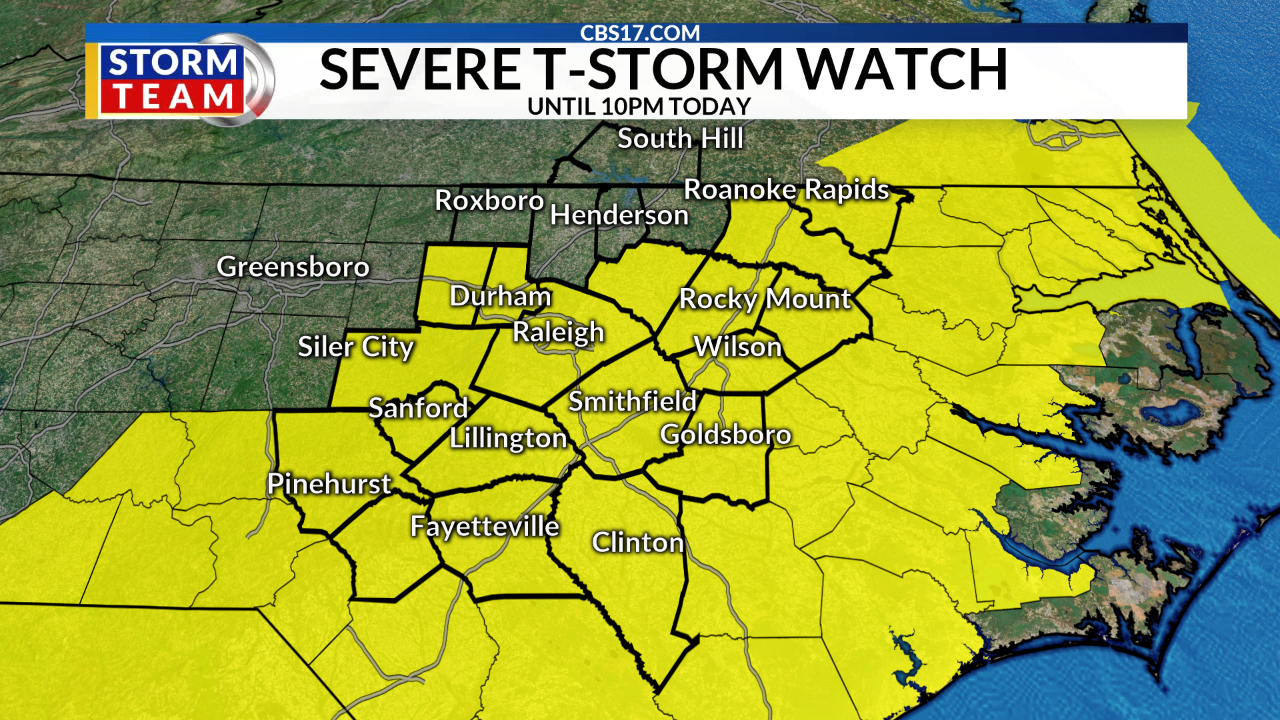 We’ll be tracking the storms on-air and on social media!

Showers and storms produced some locally heavy rain overnight, but fortunately we haven’t received any reports of flooding. That overnight rain lifted off to the north early this morning — the break in the action will last through late morning, before more storms fire up around midday. By late afternoon and early evening, we’ll be looking at widespread thunderstorms across central North Carolina: 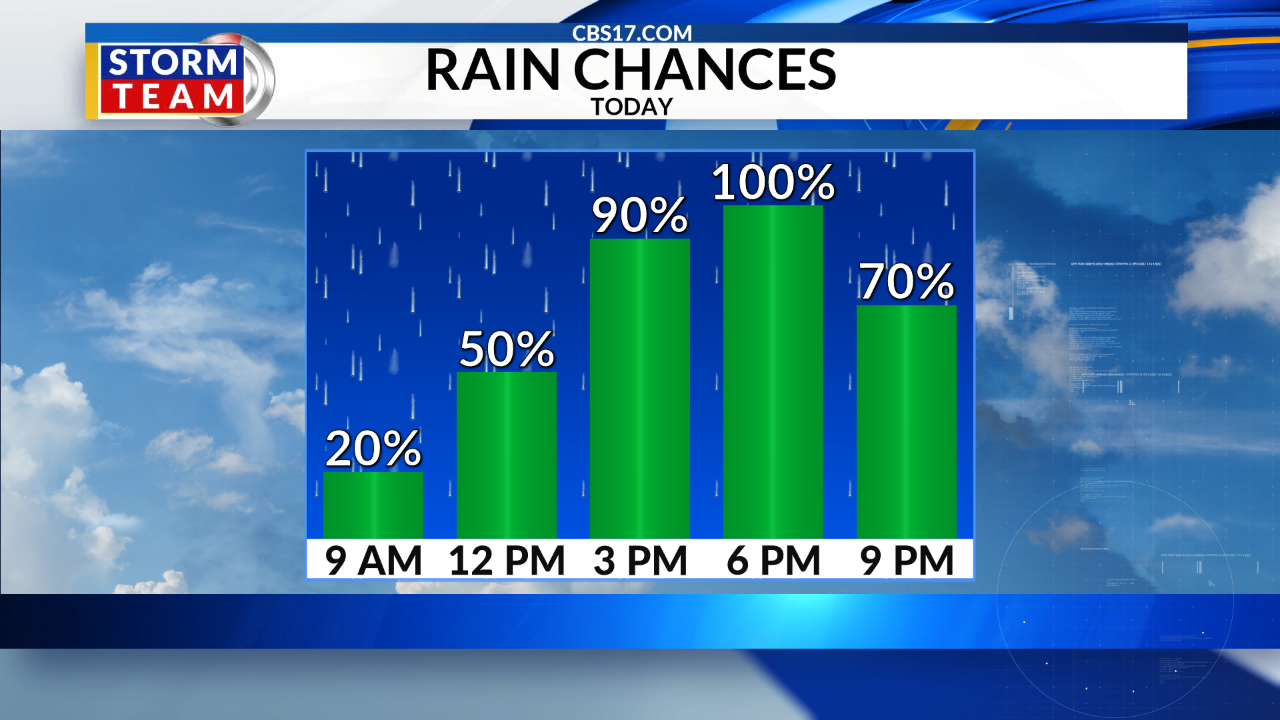 The HRRR model’s radar simulation from 10am through midnight shows the storms blossoming on the radar around the Triangle early this afternoon — while the individual storms will move southwest-to-northeast, the whole complex of storms will slowly sag southward:

The intensity of those storms depends on how much we warm up during this morning’s break. Areas along the Virginia state line will likely be stuck in the 70s, while the Triangle heats up to the mid 80s by noon and the Sandhills and Coastal Plain reach up to around 90°:

Those temperatures in the Triangle are warm enough to support an elevated severe weather threat as the storms re-develop — every degree warmer just increases the size of the atmospheric powder keg. The Storm Prediction Center has outlined a “Slight Risk” (level 2 of 5) of severe weather along and east of US-1, with a “Marginal Risk” (level 1 of 5) along I-85: 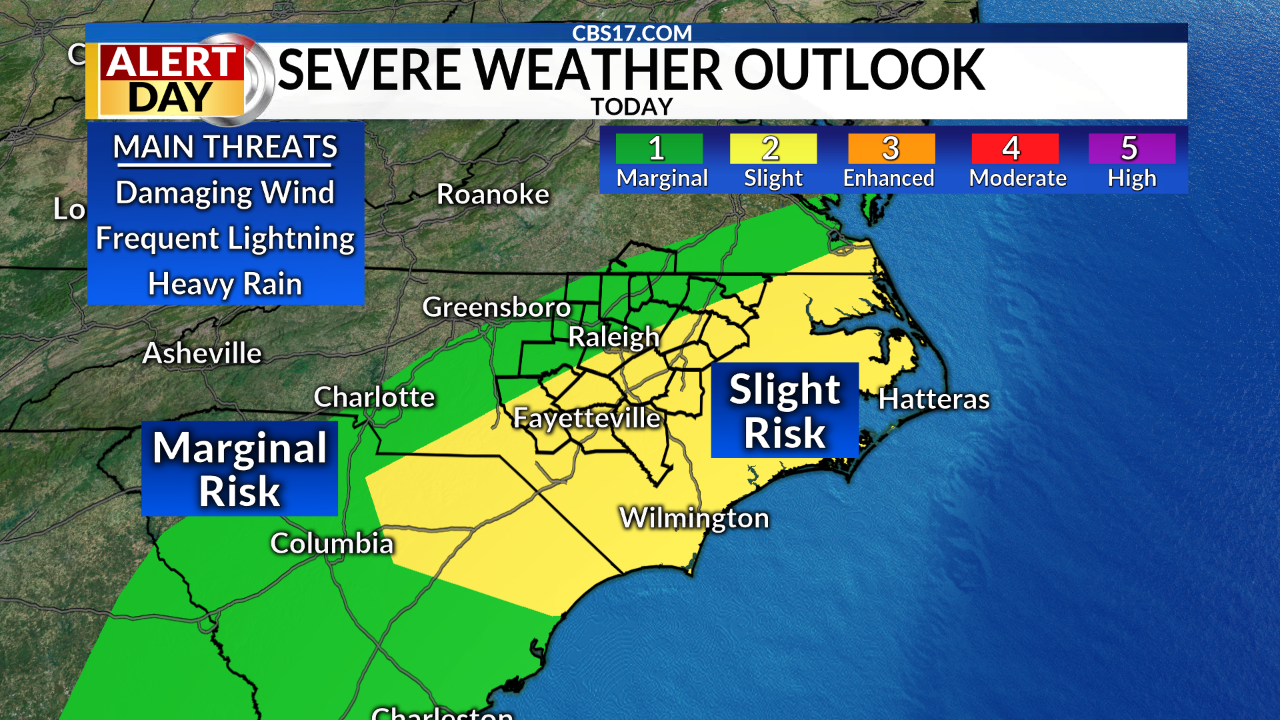 The main threats will be damaging straight-line winds over 60 MPH, and the possibility of flash flooding. Large hail will be possible south of the Triangle, where the atmosphere will have more time to heat up and become even more unstable: 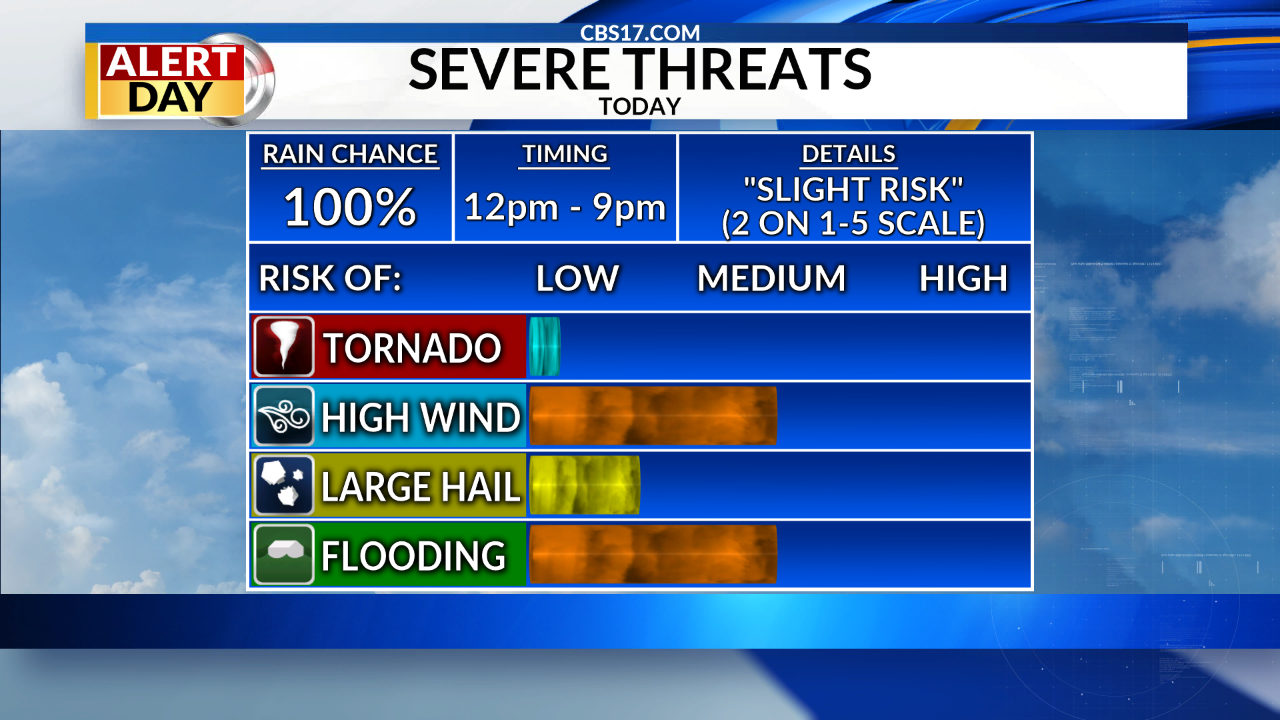 Here’s some good news — there won’t be much wind energy farther up in the atmosphere to organize the storms into an even more-significant severe threat. That lack of upper-level wind energy also helps to really limit the tornado threat. There’s always a chance that the “outflow” of rain-cooled air from different thunderstorms can help spin up an area of rotation, but it’s not our main concern today. We will have to carefully monitor the amount of rain that falls this afternoon and this evening — a Flash Flood Watch is in effect for the northeastern half of central North Carolina until 11:00pm: 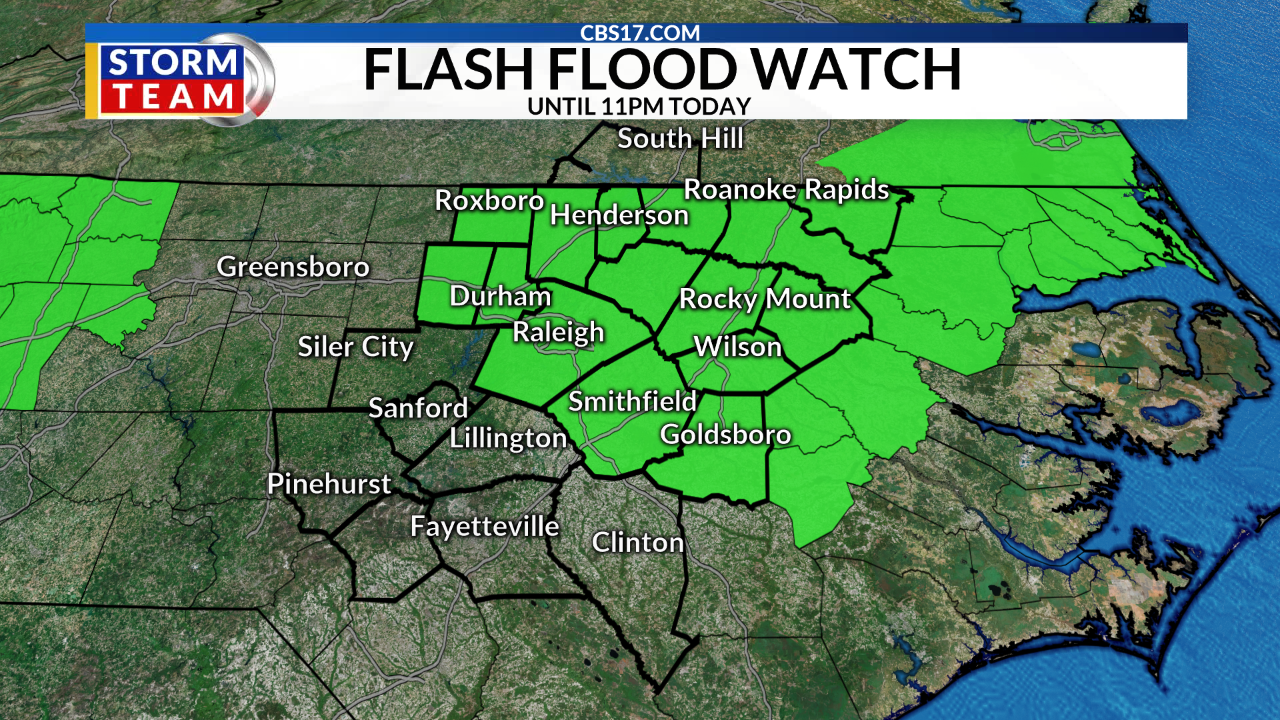 While we have to watch for severe weather today, the cold front responsible for today’s storms will help to keep the newest tropical system out of our hair. Yesterday, the National Hurricane Center started issuing advisories on Tropical Depression Three, just off the coast of Florida. And this morning, the NHC stopped issuing advisories as the disturbance just fell apart. What’s left of it won’t impact our weather: 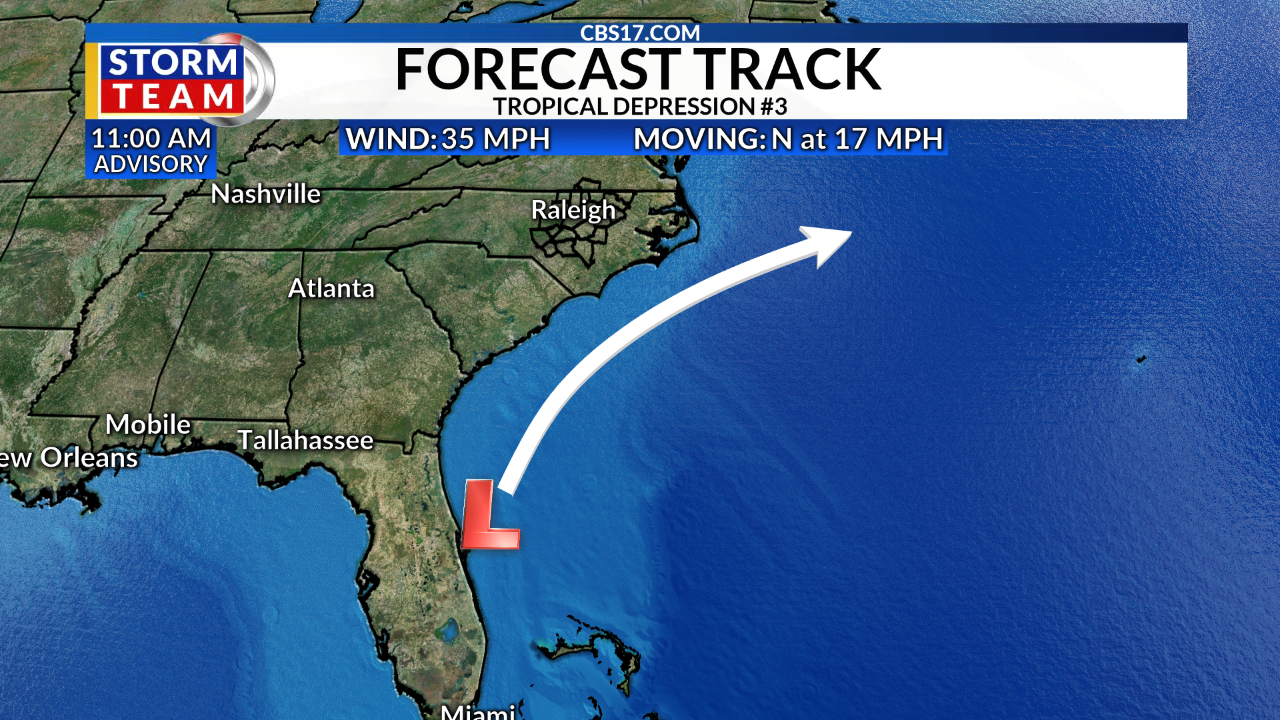 Here’s some more good news: once the rain winds down late tonight, we’ll dry out for the rest of the week. Even better news: high temperatures will stay in the 80s through Saturday! 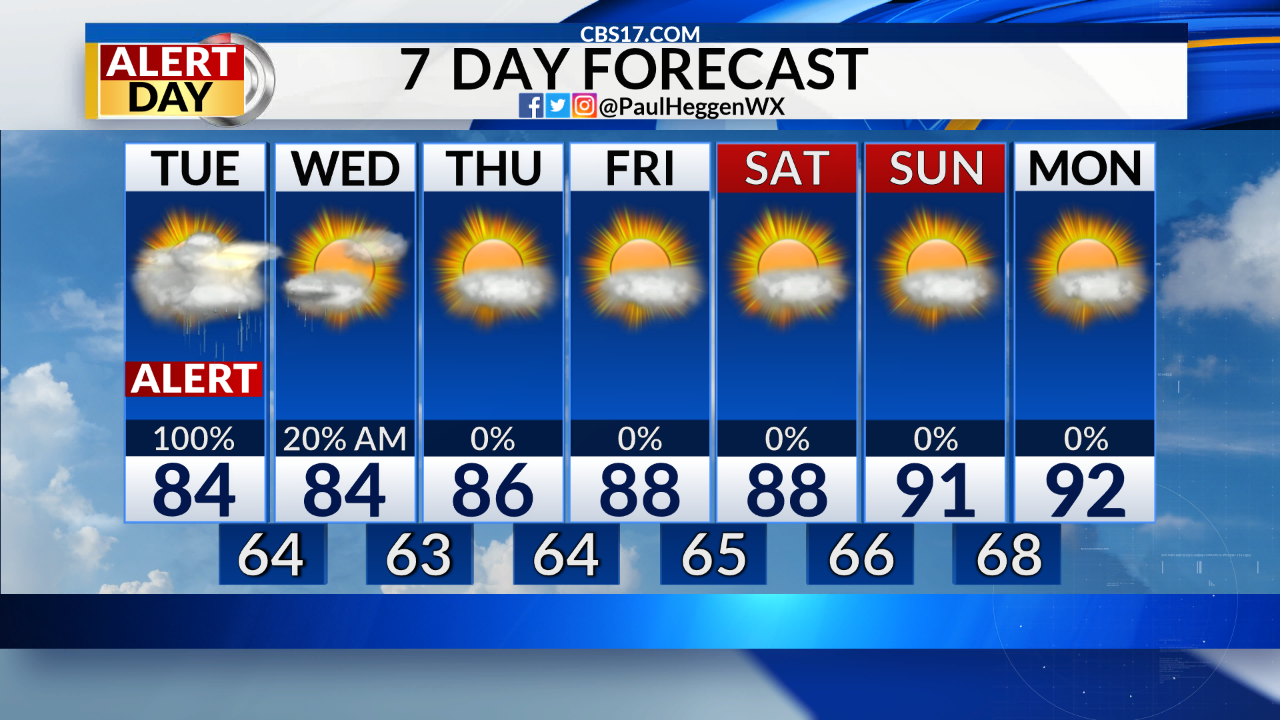 And here’s the best news: the humidity will drop into the “tolerable” range on the Muggy Meter — that’s about the best we can hope for this time of year: 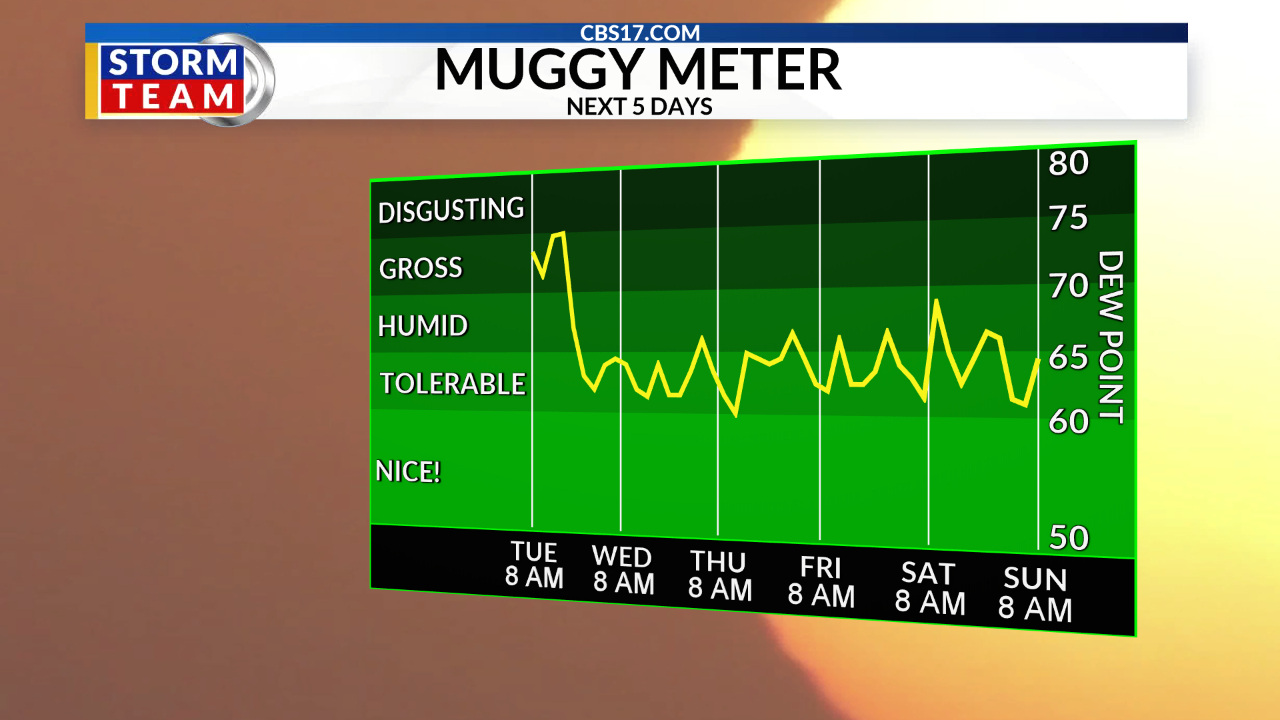 RALEIGH, N.C. (WNCN) -- With fall now in full swing, you may be looking for fun ways to welcome the new season. Enjoying the fall foliage is the perfect way to get into the fall spirit.

Dr. Robert Bardon, a professor of forestry and environmental resources at N.C. State University, says this year’s foliage is expected to be more vibrant than average thanks to our previous weather this year.

Tropical Storm Beta weakened to a depression over Texas Tuesday, but is still bringing heavy rain to parts of the middle and upper coast.

This story highlighting Sunday's hurricane developments is no longer being updated. Get the latest update here.

OKLAHOMA CITY (AP) — Tropical Storm Beta on Sunday was making a slow crawl to the shores of Texas and Louisiana, casting worries about heavy rain, flooding and storm surge across the Gulf Coast.

In despair, protesters take to streets for Breonna Taylor

Virus disrupting Rio’s Carnival for first time in a century

Hearing seeks to move protest shooter for trial in Wisconsin

New Ring security drone will fly around inside your home

Virus delays Rio’s Carnival for first time in a century

After 4 months in the hospital, suspect charged with murdering in woman in Garner

Both Republican members of NC State Board of Elections resign