After five straight days of highs in the 80s, the Triangle’s high temperature touched 90° on Sunday…and the heat will continue to build through mid-week. Highs today will reach the low 90s in most locations (for some reason, Futurecast is under-selling the heat in our northern counties): 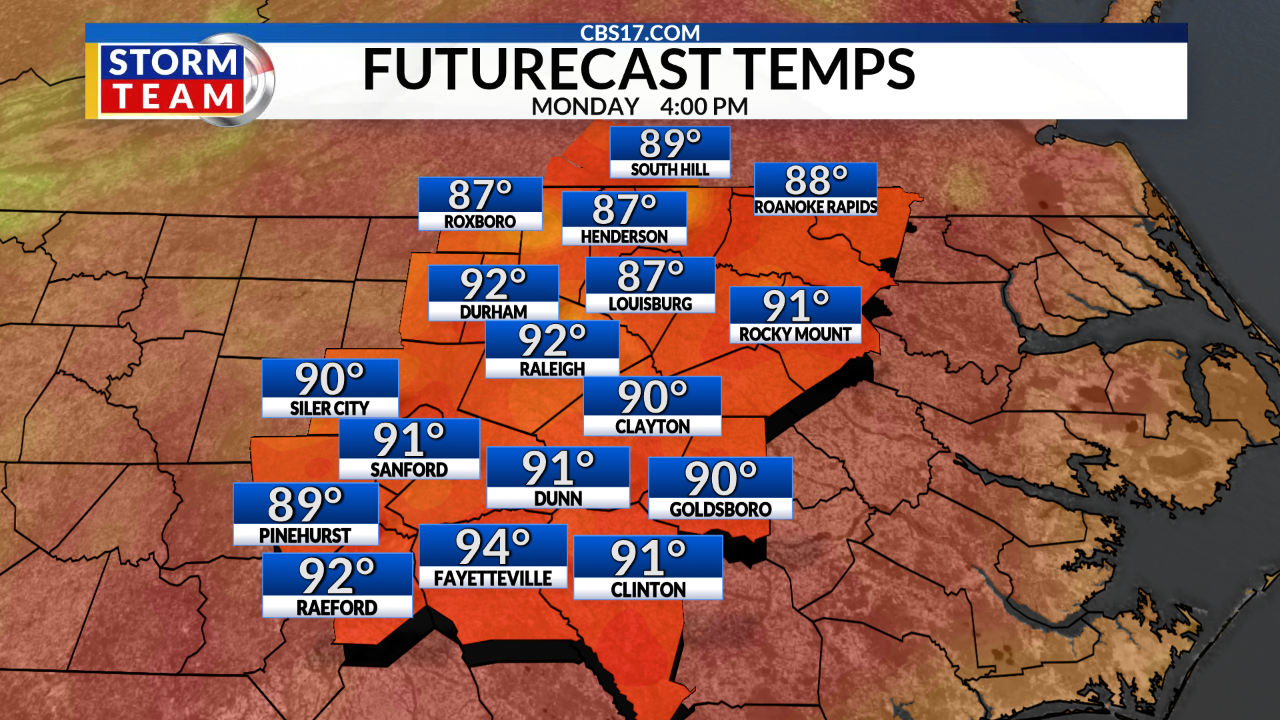 Today’s humidity will remain in the “tolerable” category, but the mugginess will gradually increase tomorrow and Wednesday. Dew points return to “gross” territory by Thursday and Friday: 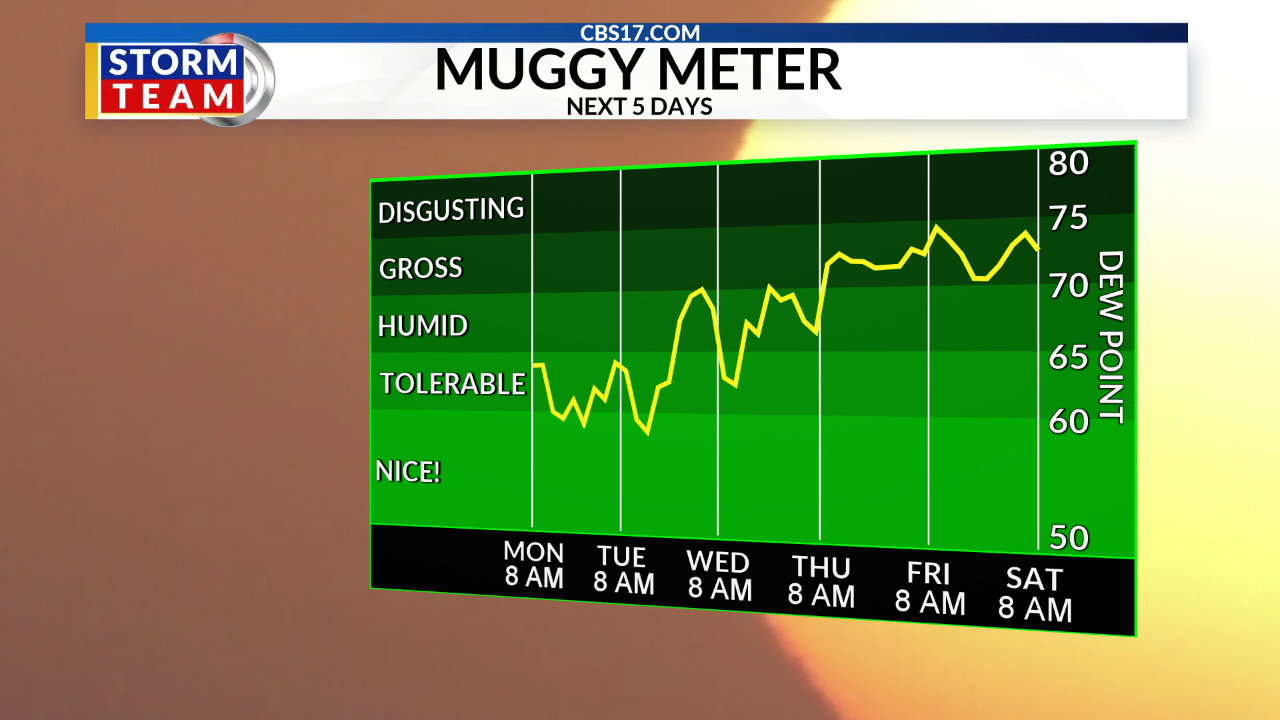 Temperatures tonight will drop back to the 60s, before that mugginess creeps in: 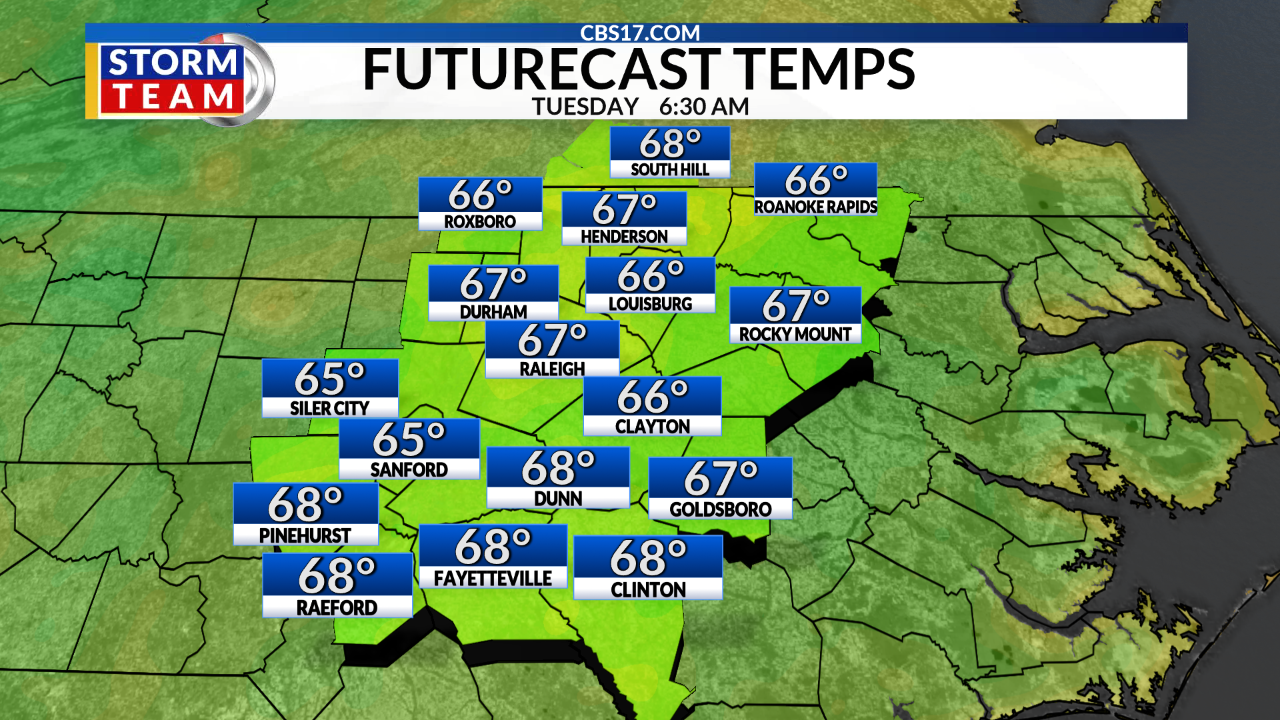 Highs on Tuesday will be almost identical to today’s but the increasing humidity will make it feel a bit worse: 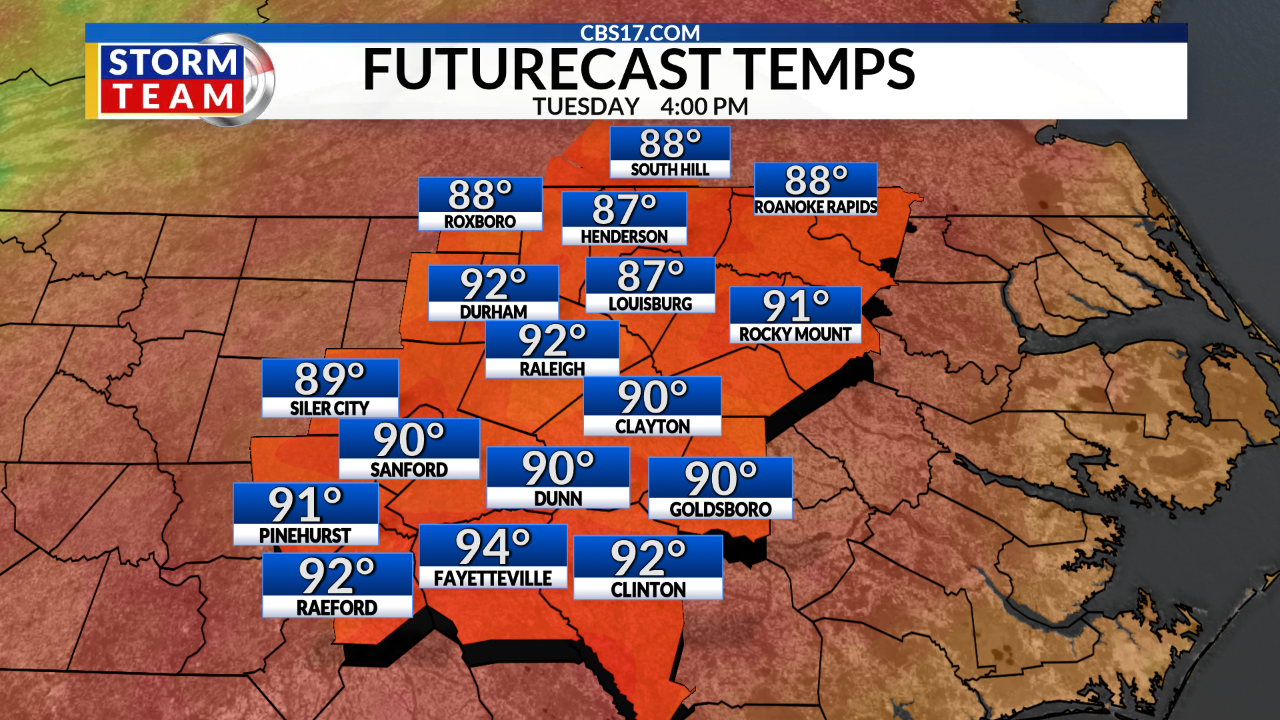 Still hot Wednesday, with enough moisture for a pop-up storm or two. A much better chance of showers and storms moves in on Thursday, and it looks like it will linger through most of the weekend. It’s a little early to be looking at hour-by-hour data this far in advance, but the European model’s big-picture simulation from Thursday morning through Monday morning shows the generally wet weather pattern:

The increased rain chances will knock our high temperatures back into the 80s…but it will be really humid through early next week: 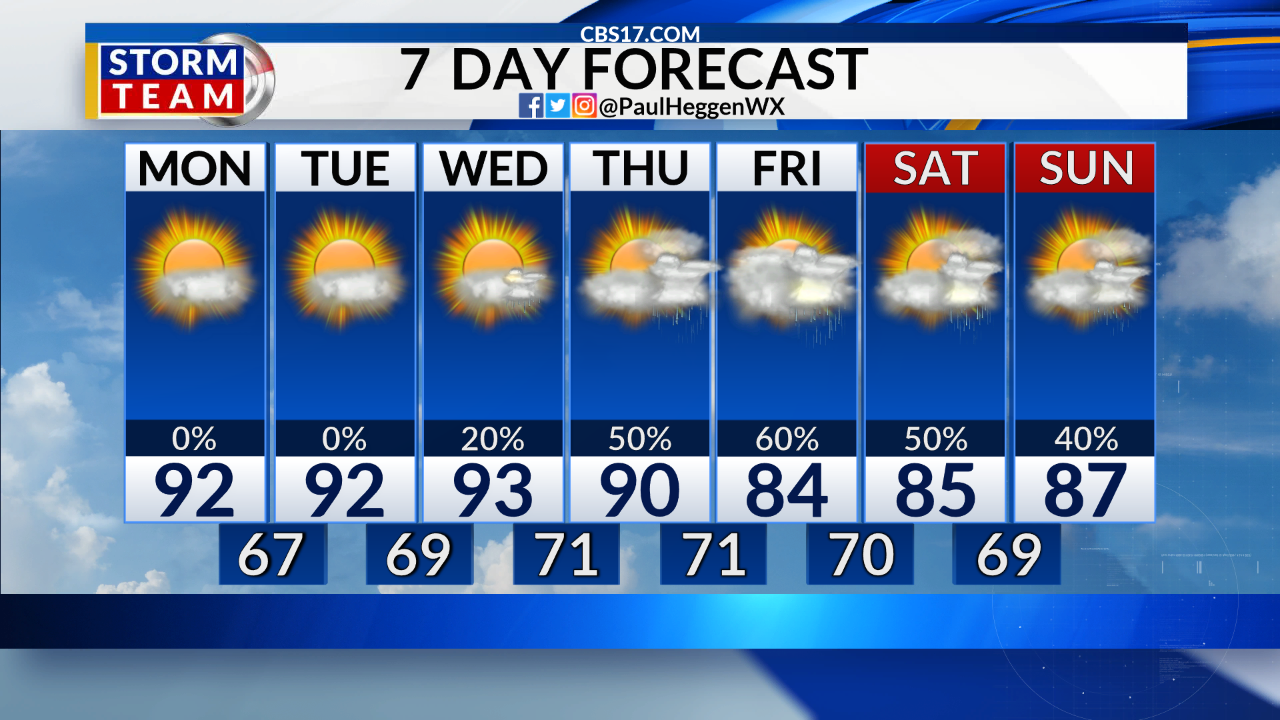 We’re also keeping an eye on a little something in the tropics…a cluster of showers and storms in the eastern Caribbean: 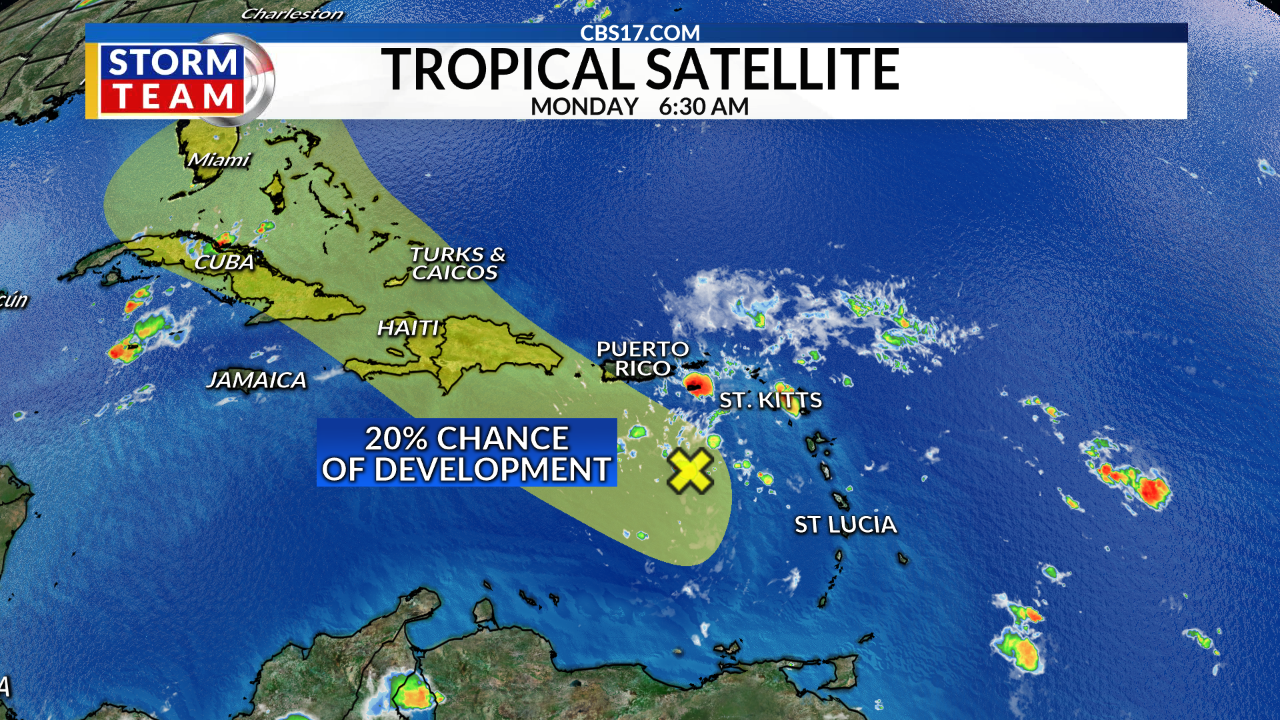 The National Hurricane Center estimates just a slight (20%) chance that it will even become a tropical depression over the next five days. Water temperatures in the Caribbean are warm, but below the 30°C level that would really boost development: 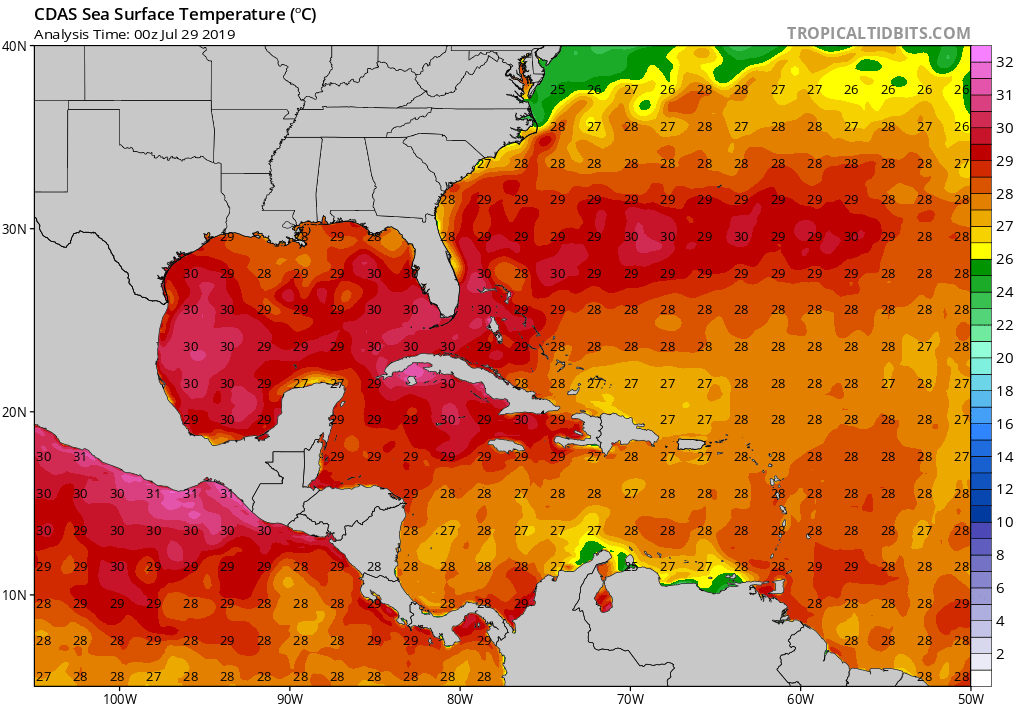 And as this system moves to the northwest, it’s going to encounter some substantial wind shear — stronger upper-level winds will tear apart the storms as they try to get organized:

Once this little atmospheric ripple reaches the Bahamas, conditions will be a little more favorable for development. The European forecast ensemble (the same model run dozens of times with different variables) estimates a 15-20% chance it becomes a tropical storm by the end of the weekend:

That’s a little too close for comfort, but it looks likely that the system would curve away from the Carolina coast, regardless of how strong it becomes. We’ll keep an eye on it, just in case!

More protests in Belarus but leader rejects demand to resign

CDC says over 600 health care workers have died from the coronavirus. One doctor has counted hundreds more.

Florida man tricks woman into thinking he was her Uber driver, attacks and rapes her

Marge Simpson uses her voice to call out Trump adviser