As we head into the 4th of July weekend, the forecast is heading in a stormy direction…not unusual for this time of year, but potentially inconvenient for anyone with outdoor plans. We’ll see some spotty storms already today, but the big story will still be the heat — highs will climb to the mid to upper 90s by mid-afternoon: 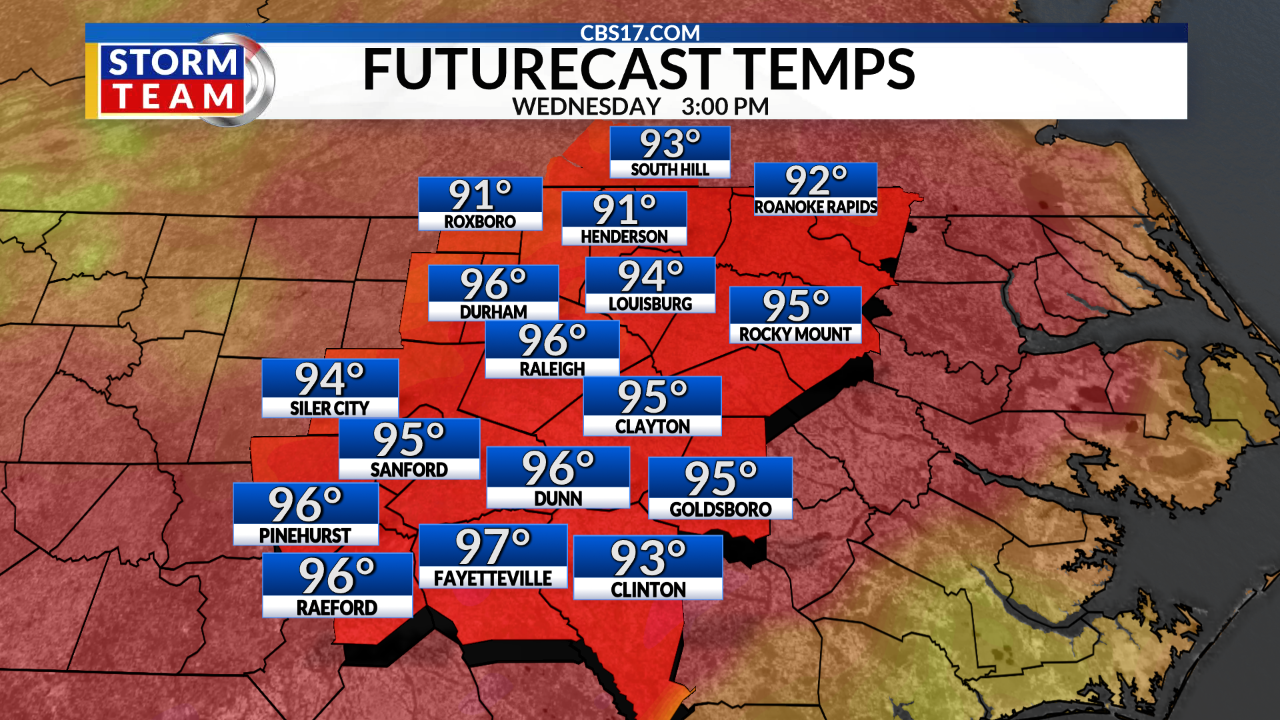 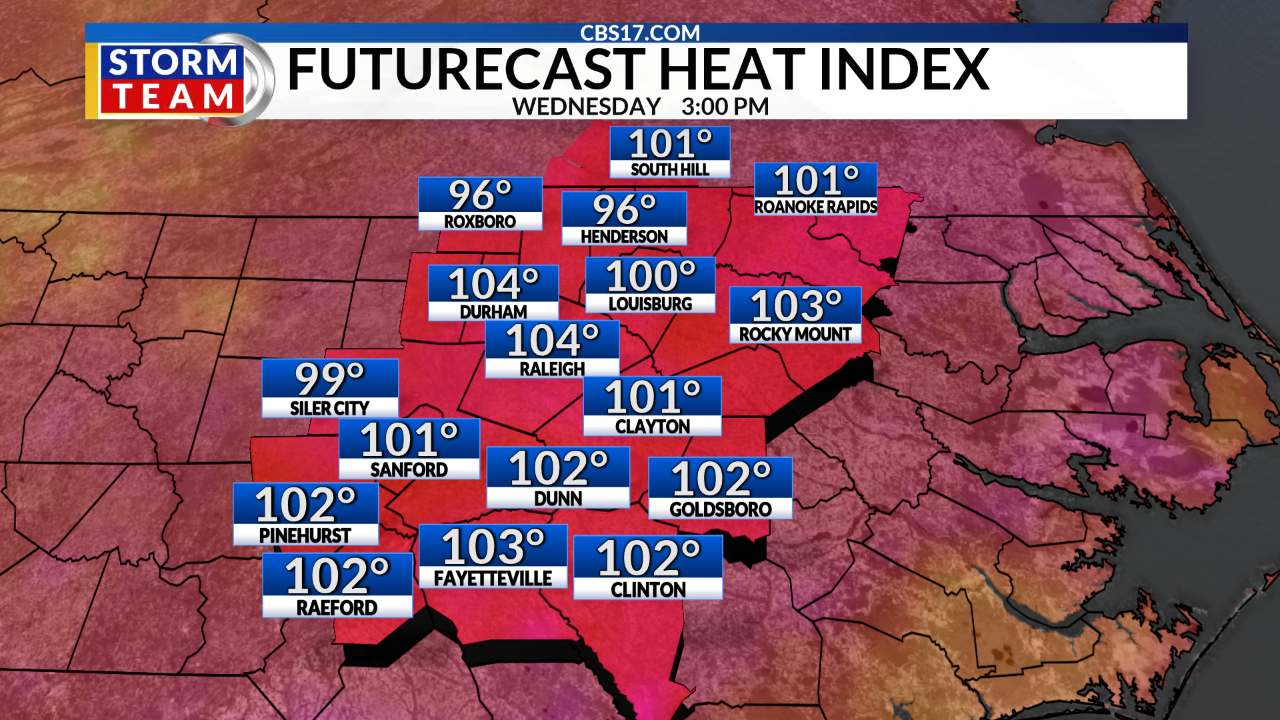 A Heat Advisory is in effect for Hoke, Cumberland and Sampson counties until 6:00 this evening. The National Weather Service’s threshold for issuing such an advisory is a heat index of 105°, so we’ll be awfully close to that in the Triangle. Either way, take it easy!

Today’s rain chances will still be lower than 50-50, even late this afternoon and early this evening. The HRRR model’s radar simulation from 10am through 10pm shows the best chance of scattered storms in the Sandhills and along the Coastal Plain:

The Storm Prediction Center has included our Virginia border counties and parts of the Coastal Plain in a “Marginal Risk” (level 1 of 5) of severe weather today: 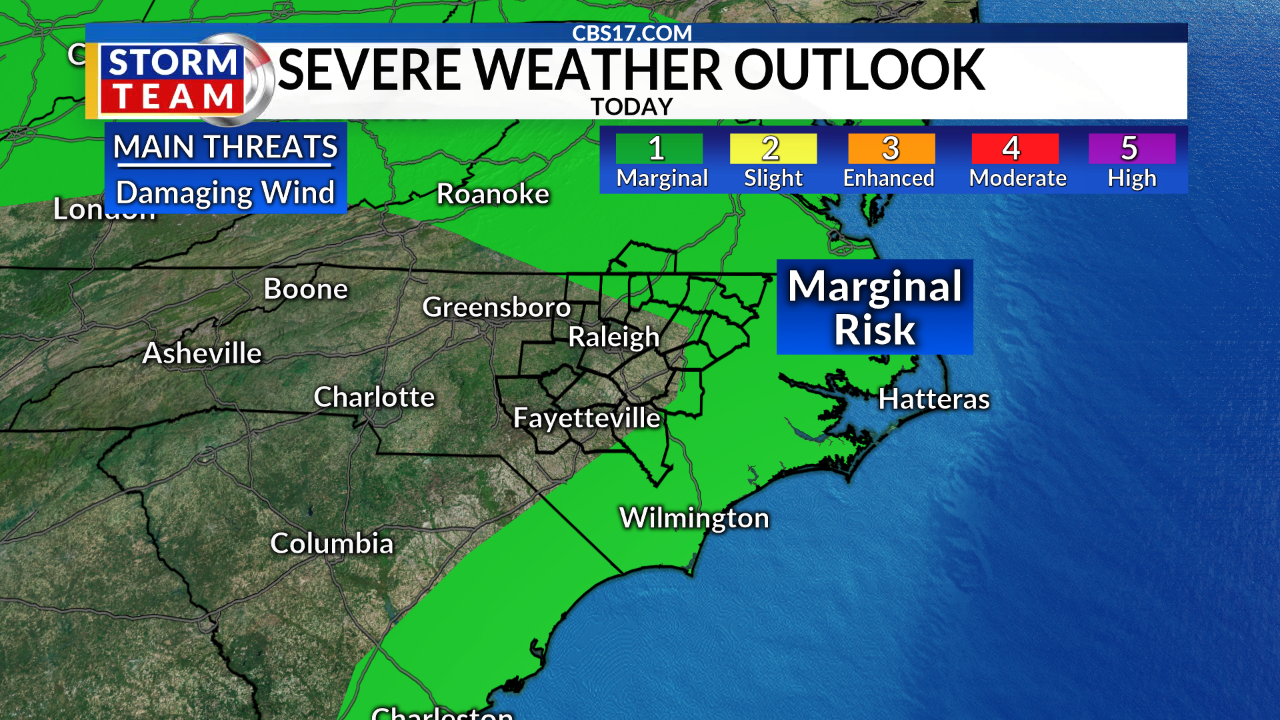 I’m not overly concerned about it today, but it’s always possible a storm or two could briefly become severe when it’s this hot and this humid.

Speaking of the humidity…it’s not going anywhere. In fact, it gets worse after today: 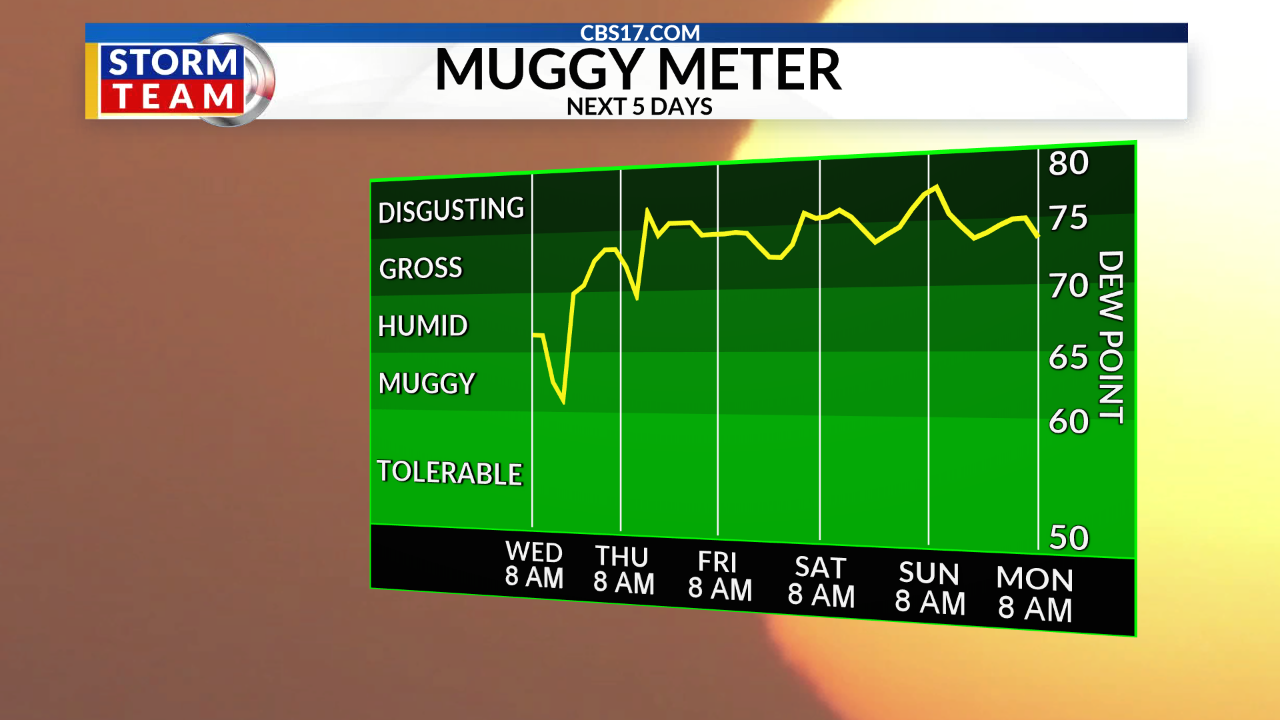 Temperatures tonight will only drop to the low to mid 70s: 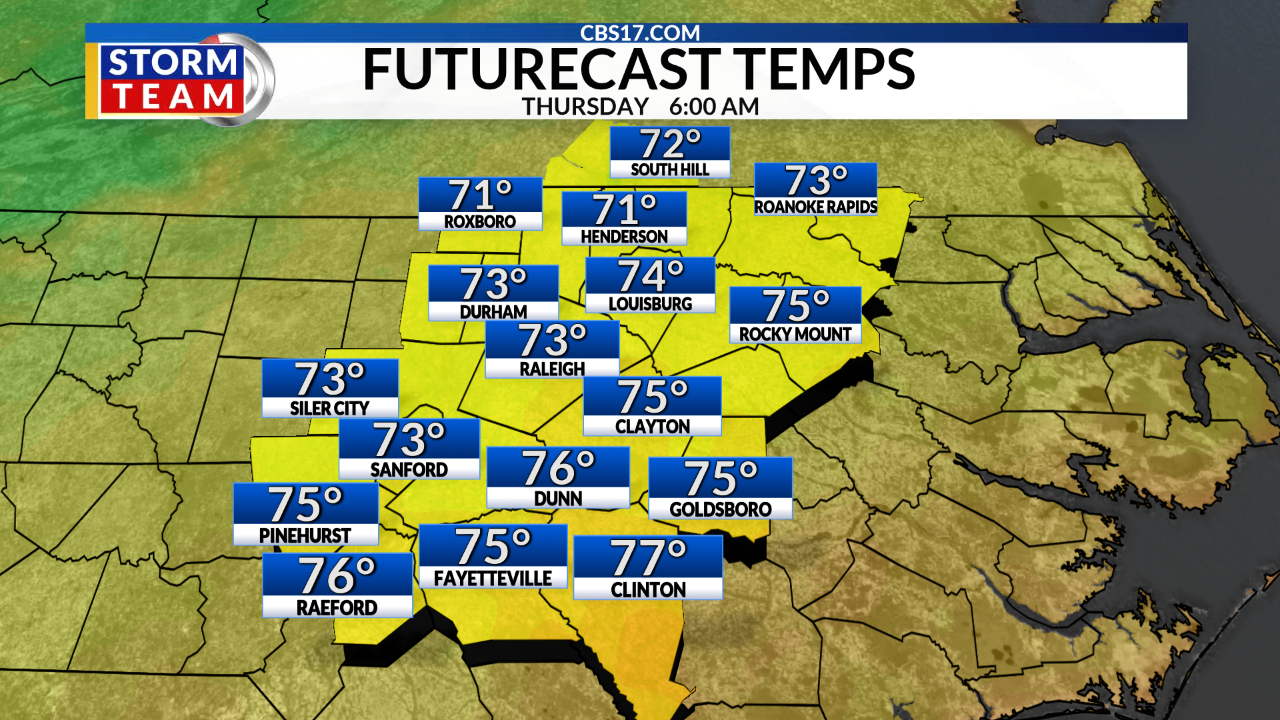 Highs for the 4th of July will reach the low to mid 90s by early afternoon: 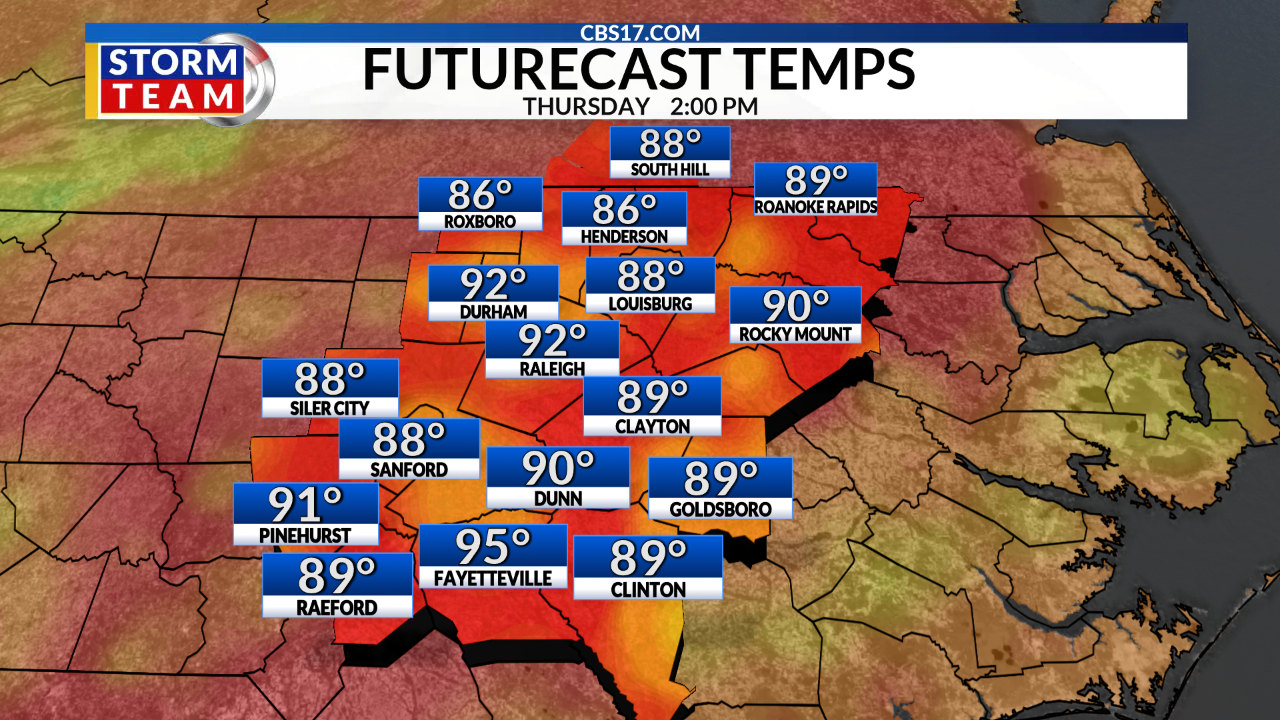 Notice the “splotchy” background color on that map, though — that’s some rain-cooled air spreading out from storms already popping up. It’s a good chance of storms overall, especially from late afternoon into early evening. The North American Model’s radar simulation from noon through midnight shows an active pattern:

All of central North Carolina is included in the Marginal Risk tomorrow: 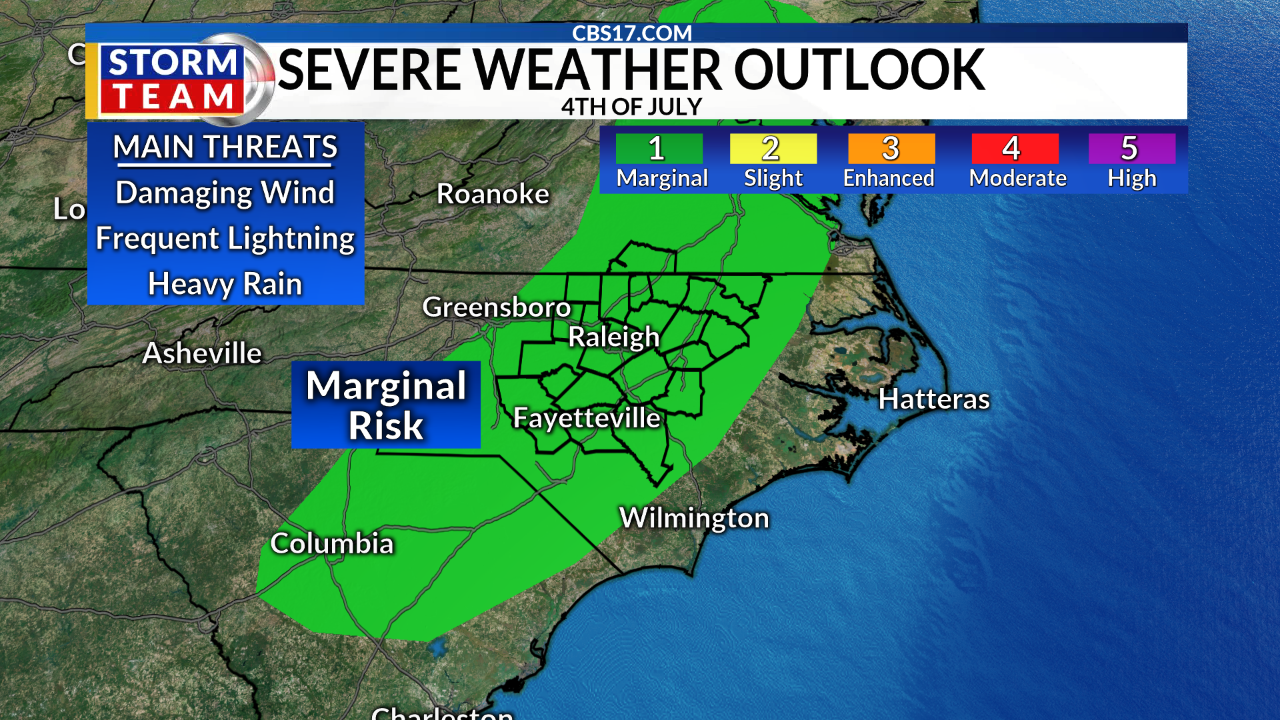 That means we expect numerous storms, a few of which could become severe — damaging winds will the main threat. Frequent lightning and heavy rain will be a threat from every storm, regardless of whether it’s severe. In this pattern, the storms typically quiet down after sunset — we’ll still have to dodge some showers around fireworks time, but I’m cautiously optimistic at this point: 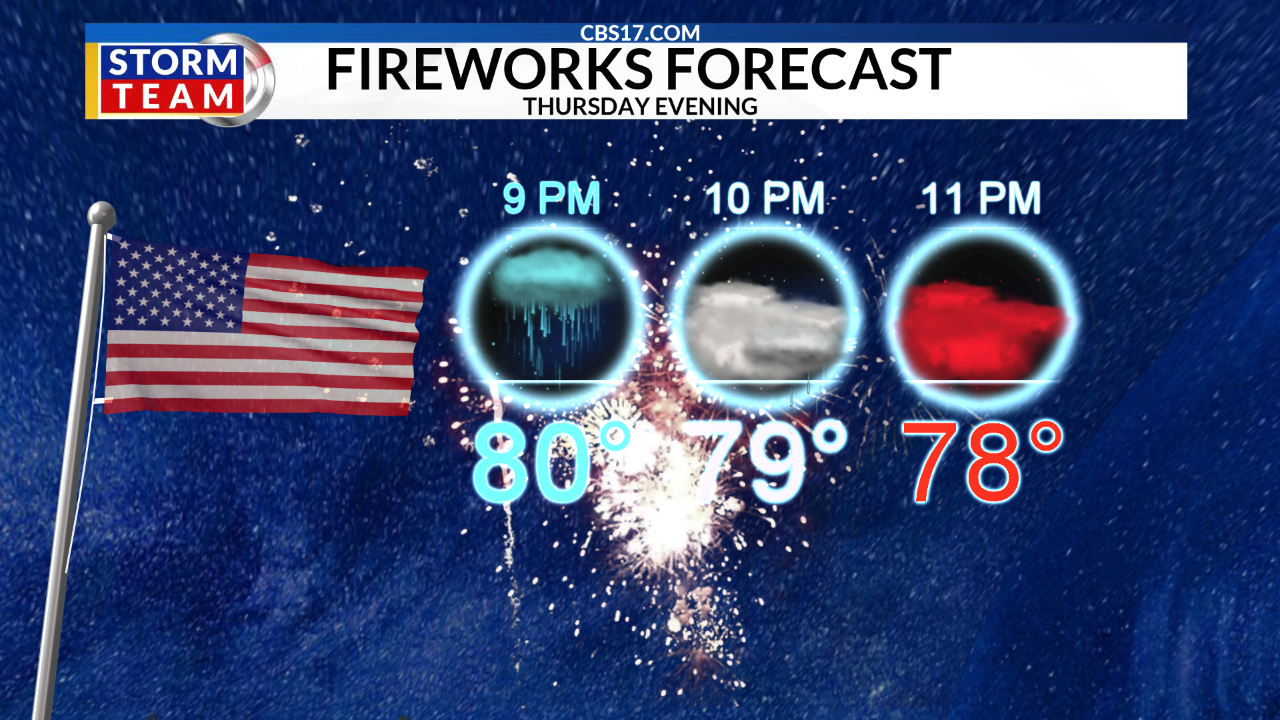 The unsettled pattern carries us right on through the rest of the 4-day weekend (if you’re lucky enough to have a 4-day weekend, that is): 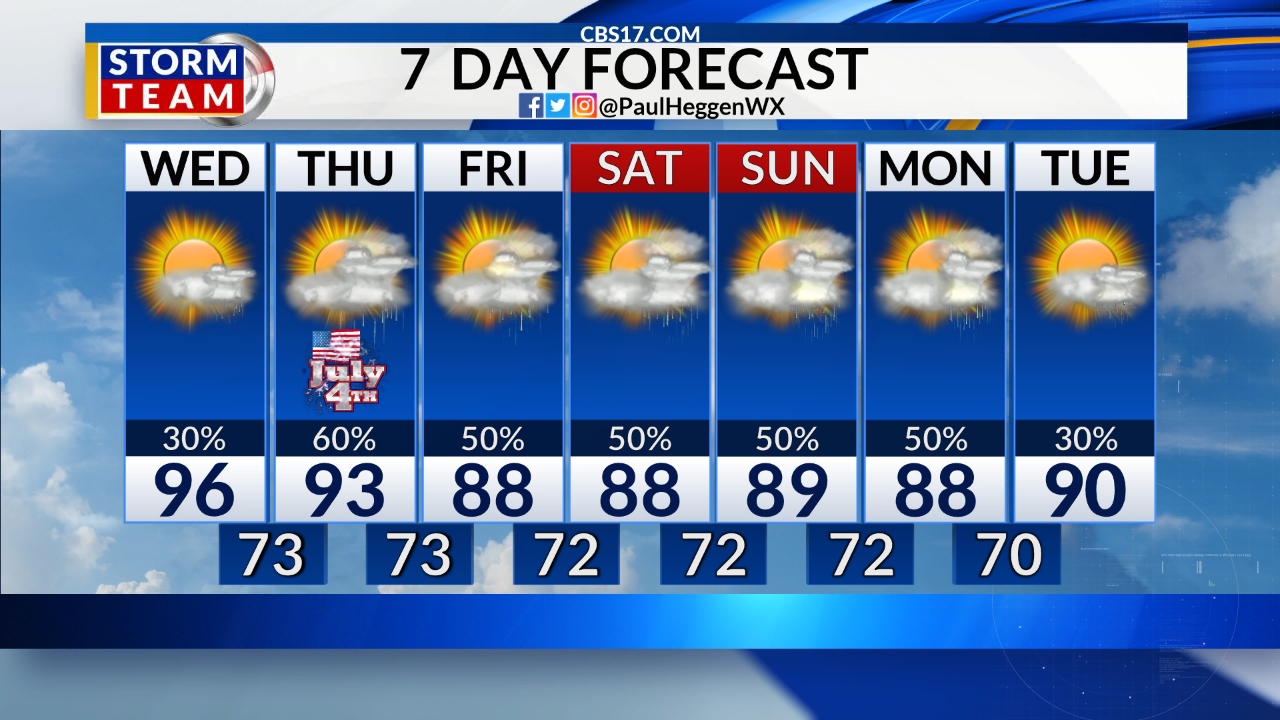 That doesn’t mean it will rain at your house every day, and it doesn’t mean each afternoon will turn into a washout. Just be flexible with outdoor plans and have an indoor alternative ready-to-go. And while the severe weather threat will be low overall, stay weather-aware in case a warning or two is issued. We’ll be here throughout the holiday weekend to keep you updated on a day-by-day basis!

RALEIGH, N.C. (WNCN) - FEMA and the CDC have released new guidance recommending hurricane plans include supplies to prevent the spread of the coronavirus.

The COVID-19 Pandemic Operational Guidance for the 2020 Hurricane Season also breaks down actionable guidance to state, local, tribal and territorial officials to prepare for response and recovery operations and encourages personal preparedness measures amidst the ongoing COVID-19 pandemic.

TAMPA, Fla. (WFLA) - Tropical Storm Cristobal made its way back onshore Wednesday in Mexico, where it is expected to weaken before finding its way back to the Gulf.

Cristobal, the third named storm of the 2020 Atlantic hurricane season, formed on Tuesday from Tropical Depression Three. The system was part of the remnants of the Pacific's Tropical Storm Amanda.

The National Hurricane Center put out an advisory at 12:30 p.m. ET saying Hurricane Hunters found Tropical Depression Three had strengthened to become Cristobal. As of 11 p.m. ET, the tropical storm has maximum sustained winds of 50 mph.

California man gets life in prison in race-related killings

Gov. Cooper orders lowering of flags to half-staff in honor of George Floyd

Preparing for cicadas to arrive again in North Carolina

Seattle mayor bans tear gas use for 30 days amid protests