An active weather pattern will set up over central North Carolina later this week, and we’re tracking a couple areas of potential development in the tropical Atlantic. But in the short term, today and tomorrow just look HOT. Highs will climb back into the lower half of the 90s this afternoon: 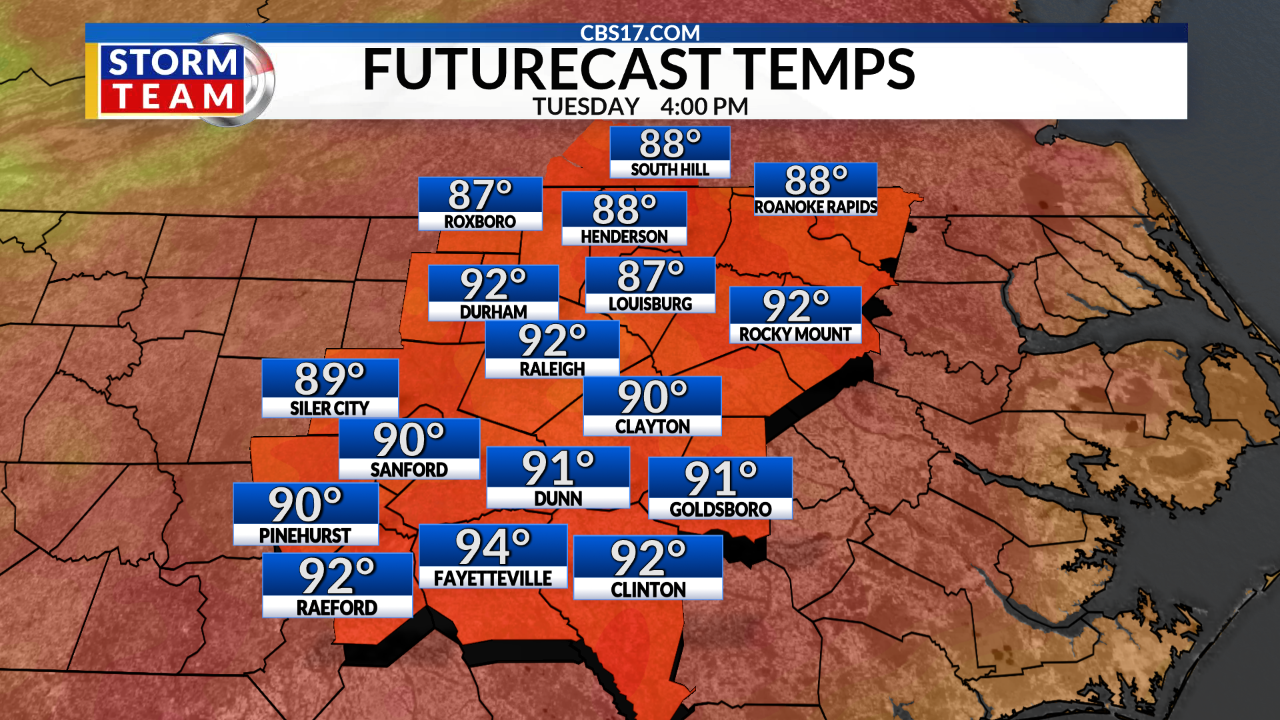 We get one more day of tolerable humidity…but the mugginess will climb tonight and tomorrow, and it will feel pretty gross by Thursday and Friday: 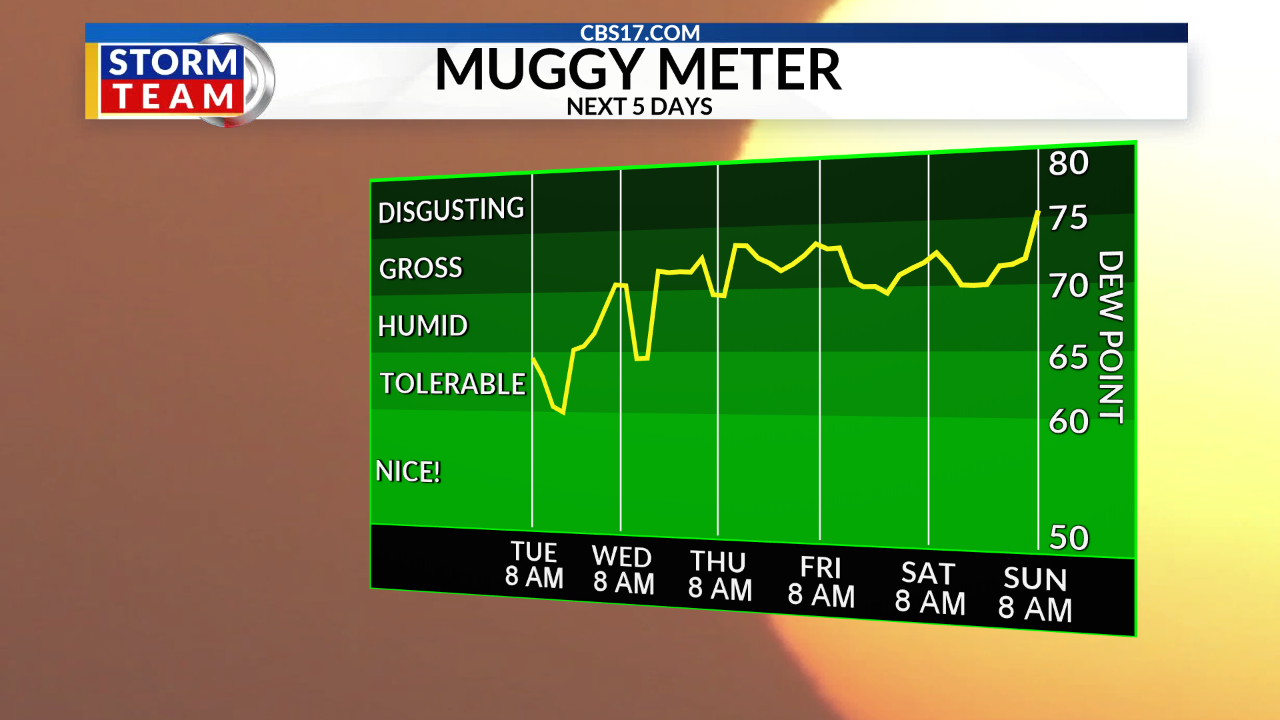 I can’t completely rule out the possibility of a pop-up shower or storm this afternoon, but the chance will be 10% or lower. The HRRR model’s radar simulation from 10:00am through 10:00pm shows a couple of blips, but that’s about it: 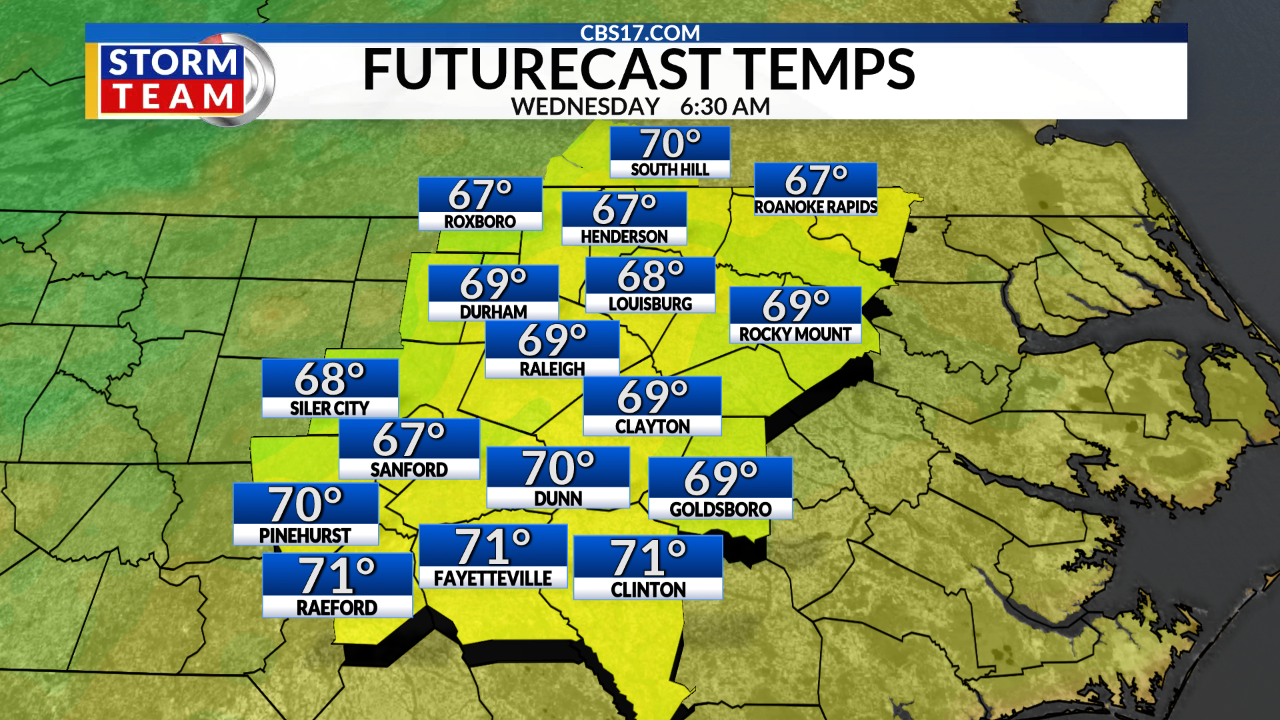 Wednesday’s high temperatures will be very similar to today’s, maybe a degree warmer: 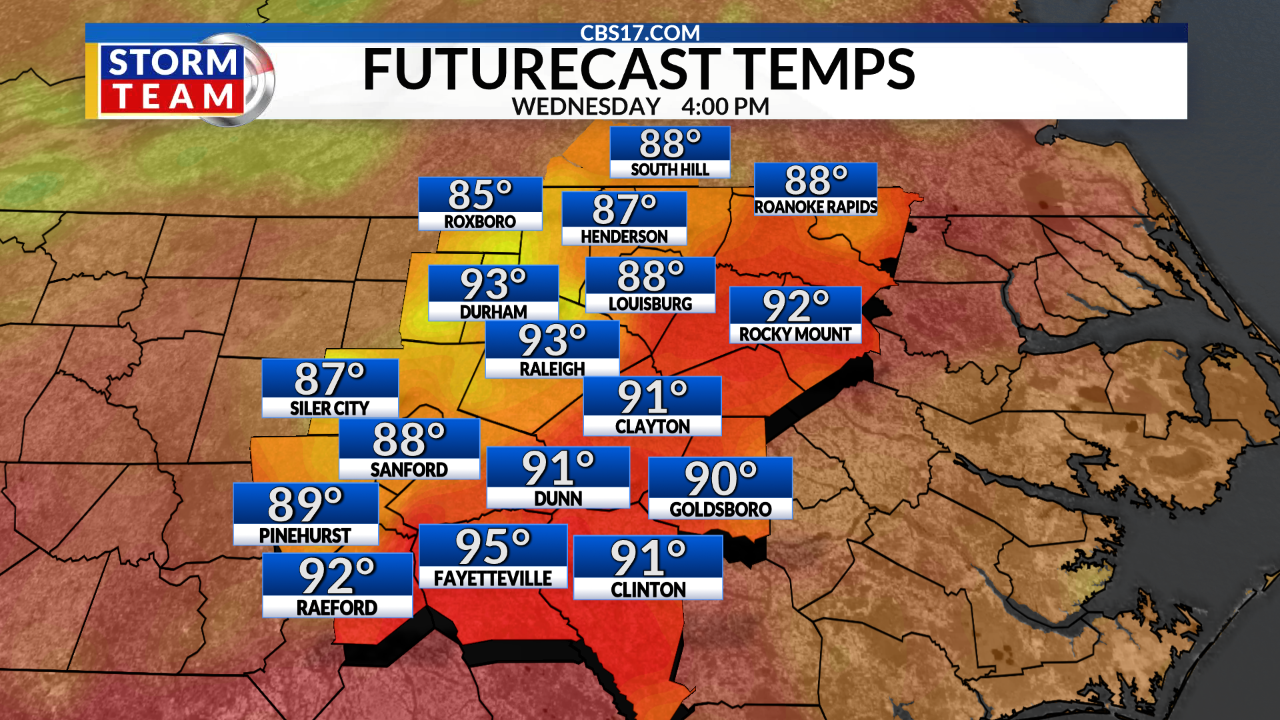 The increased humidity will bump up our storm chances just a little bit, but the isolated storms will still be more miss than hit. The North American Model’s simulation from noon through midnight Wednesday shows the limited activity:

Once the oppressive humidity is back in place on Thursday, it will fuel a good chance of scattered storms each day through the weekend. We’ll start off dry on Thursday, giving temperatures time to warm up to around 90° — that will help “pop the lid” on the atmosphere Thursday afternoon. Off-and-on showers and storms will quiet down Thursday night, then re-develop on Friday. The European forecast model from 8:00am Thursday through 2:00pm Friday gives us a sense of the unsettled pattern:

Off-and-on showers and storms will re-develop Saturday and Sunday. The morning hours look generally dry this weekend, but be flexible with outdoor plans in the afternoons and evenings, and have an indoor alternative in mind: 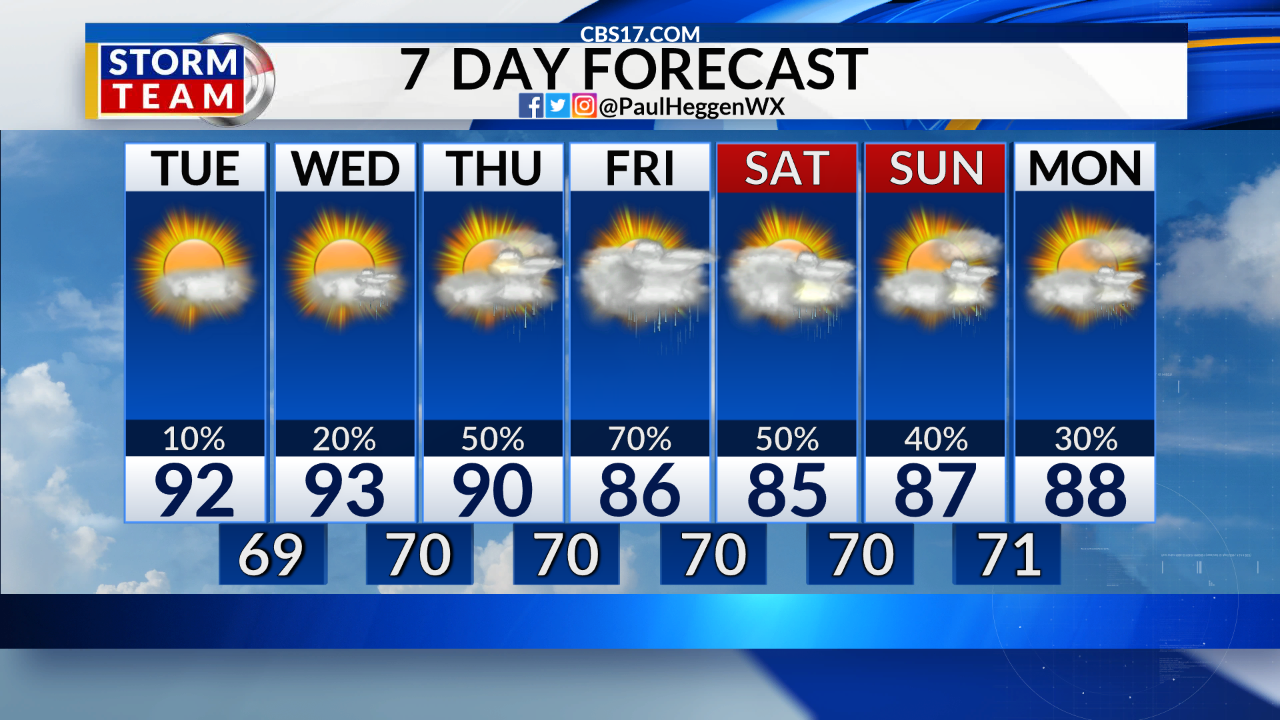 The higher rain chances will drop high temperatures back to the 80s, but don’t get too excited — the humidity will remain nasty.

As we turn the calendar page from July to August, we get closer to the peak of the Atlantic hurricane season…so it’s no surprise that we’ll have to keep an eye on a couple areas of disturbed weather. A cluster of showers and storms in the eastern Caribbean won’t do much as it tracks over the Dominican Republic today and tomorrow, but it could strengthen later this week: 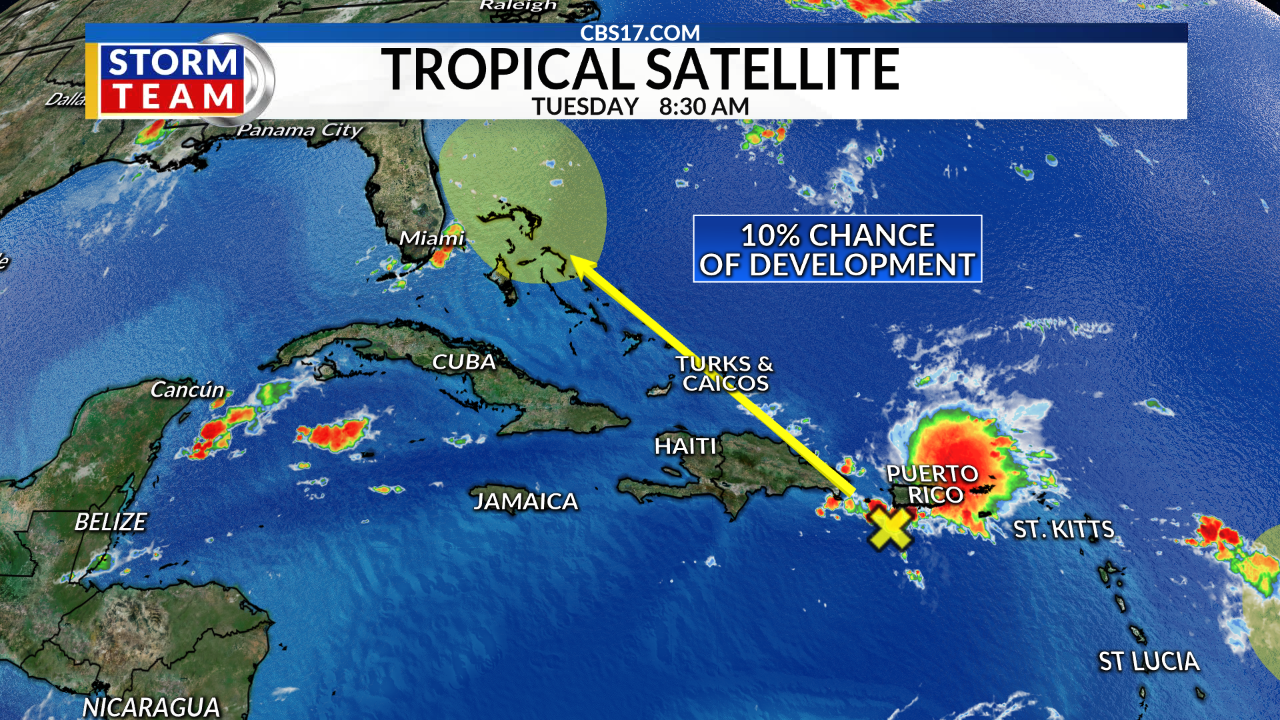 I’m just not concerned about that one at this point. But notice the brighter colors at the bottom of that image…that brings us to the second area of disturbed weather. It’s way, way WAY out there in the Atlantic right now, barely off the west coast of Africa: 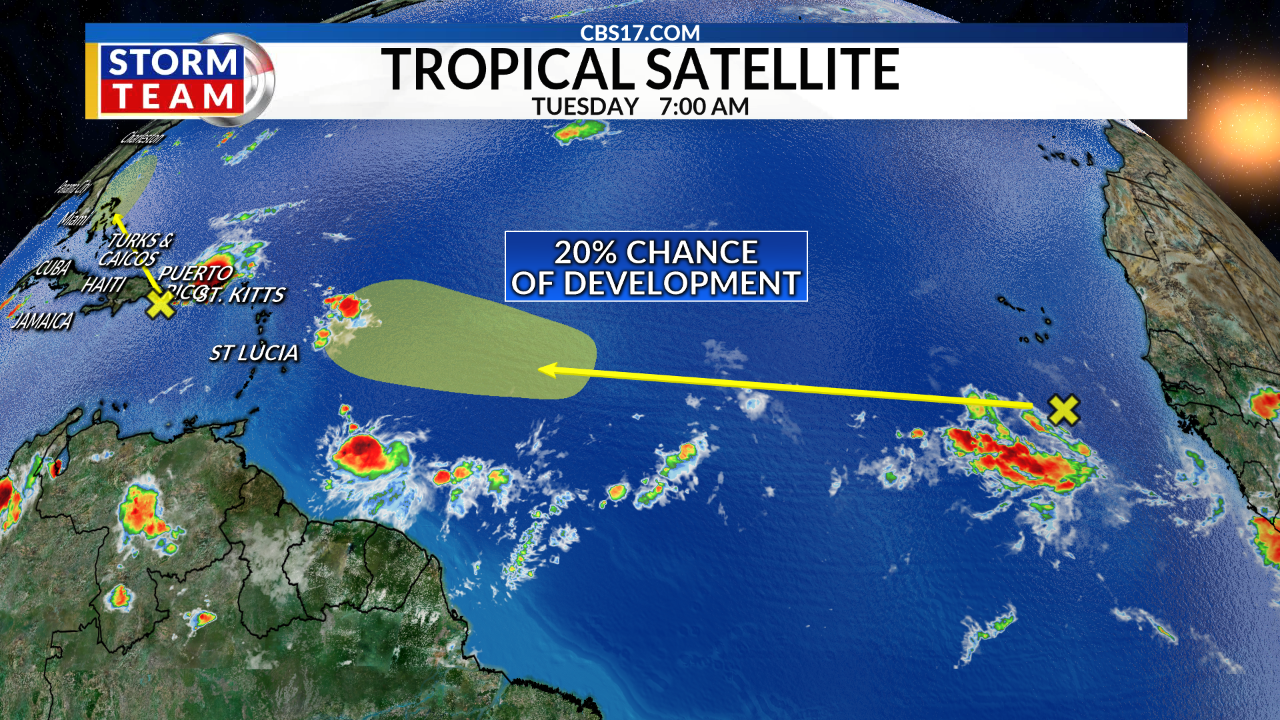 Where it goes from there is anyone’s guess, but the possibilities on the “spaghettios” plot (yes, that’s what we call it) mostly curve it away from the Atlantic coast:

That’s a LOOOOOOONG way off in forecasting terms, so it’s way too early for any level of excitement/worry/angst. We’ll keep a close eye on things for you…

This weekend's weather ended up being "January nice" overall -- but our next chance of rain is on the way later today. We'll just see increasing and thickening clouds overhead for most of the day, before the chance of rain arrives just after sunset.

Despite the clouds, temperatures will still reach the low to mid 50s, exactly normal for late January.

Political act at Biden office led to arrests, but organization believes in their cause