The hot temperatures of the past couple days have been accompanied by “acceptable” humidity levels, but the mugginess is climbing today. We’re going to be hot again, with highs in the low 90s this afternoon:

The dew point will climb to the upper half of the 60s — that’s not AWFUL for late July, but it’s enough to push the heat index into the mid to upper 90s: 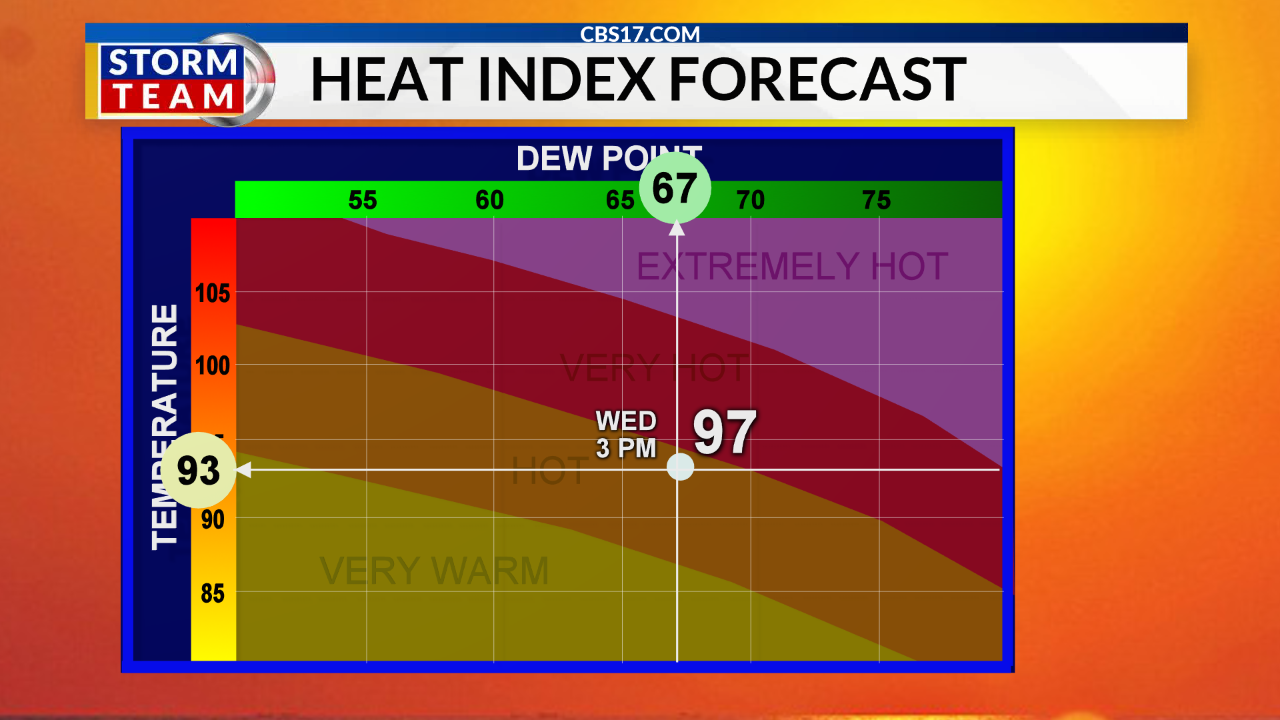 The increased humidity means we’ll see some pop-up storms, especially late this afternoon into this evening: 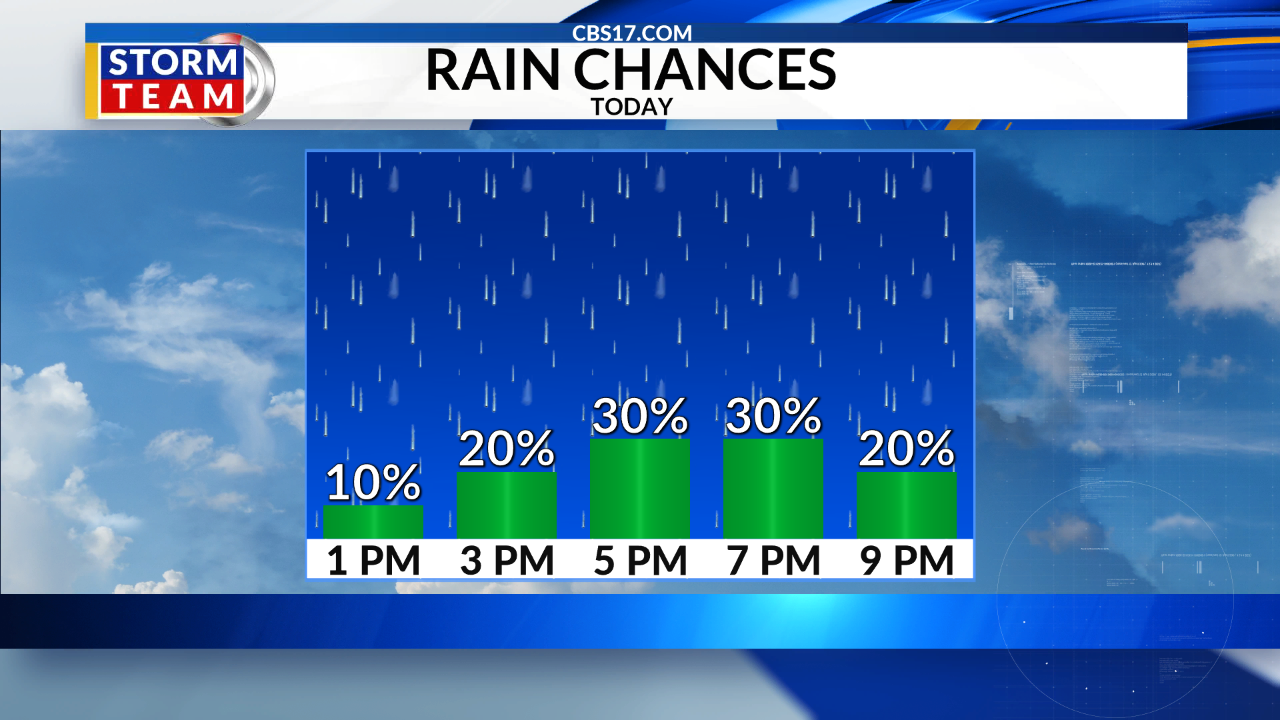 The HRRR model’s radar simulation from noon through midnight shows the hit-or-miss nature of the storms:

Just be flexible with any outdoor plans late in the day — and you can basically stay in that frame of mind through the middle of next week!

Once the showers and storms fade off the radar tonight, temperatures will drop to around 70° by early Thursday morning — exactly normal for the first morning of August: 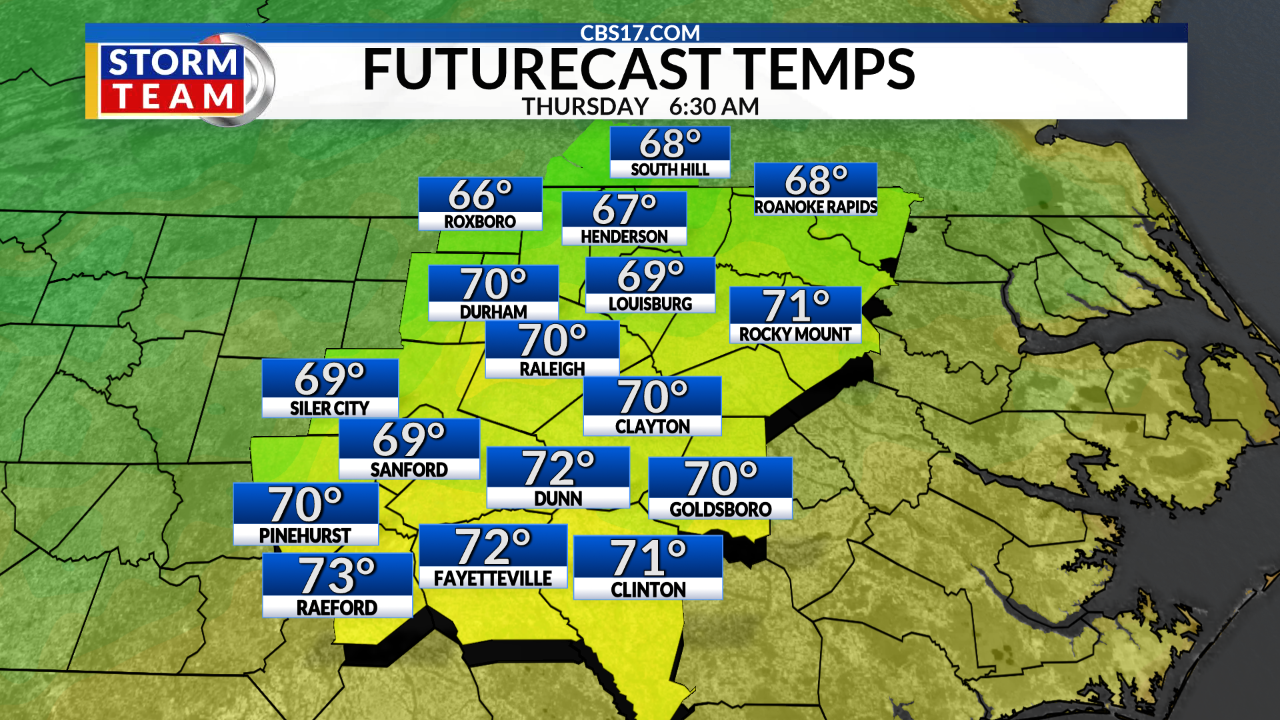 We’ll be dry for at least the first half of the day on Thursday, which will allow temperatures to heat up to the upper 80s and low 90s once again: 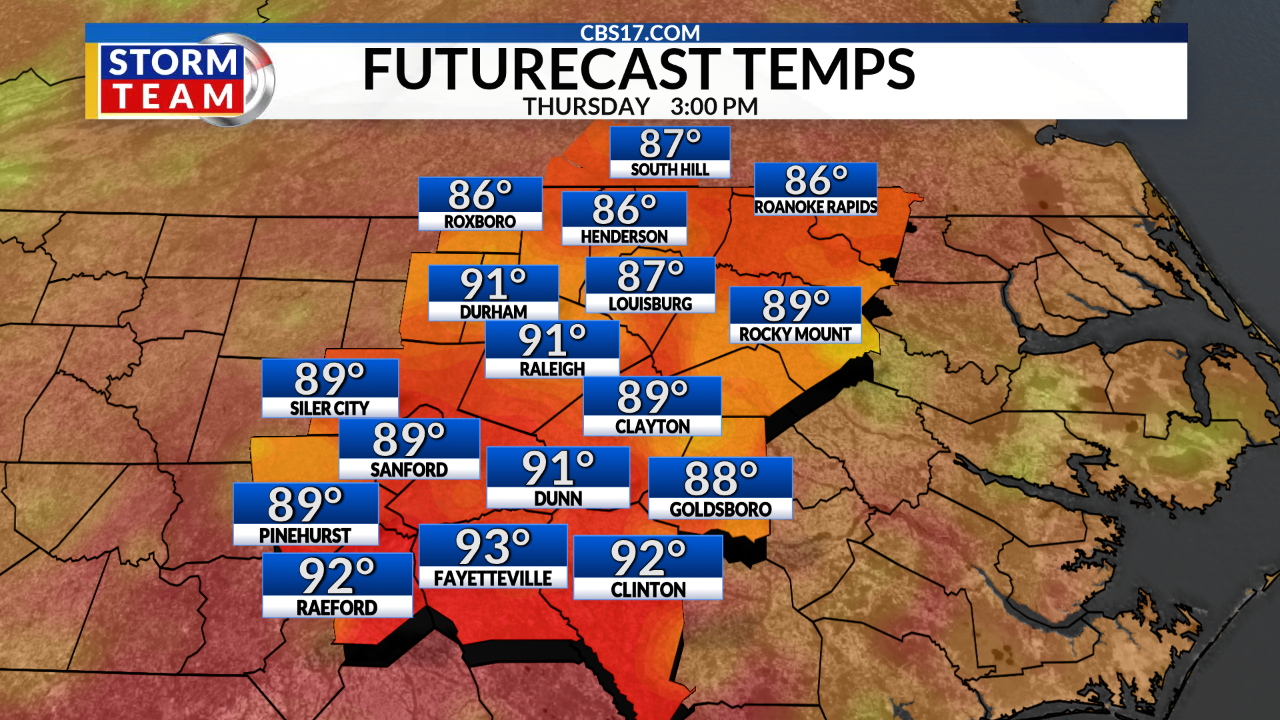 A better chance of storms will develop by late tomorrow afternoon, continuing into the evening and early overnight. The North American Model’s radar simulation from noon through midnight shows more storms compared to today, but also plenty of gaps in between:

The unsettled pattern will make itself right at home Friday and Saturday. The European forecast model’s simulation from 6:00am Friday through 2:00pm Saturday shows waves of showers and storms developing and moving across central North Carolina:

The clouds and rain chances will drop our high temperatures from the 90s to the 80s — but the humidity will remain locked in place: 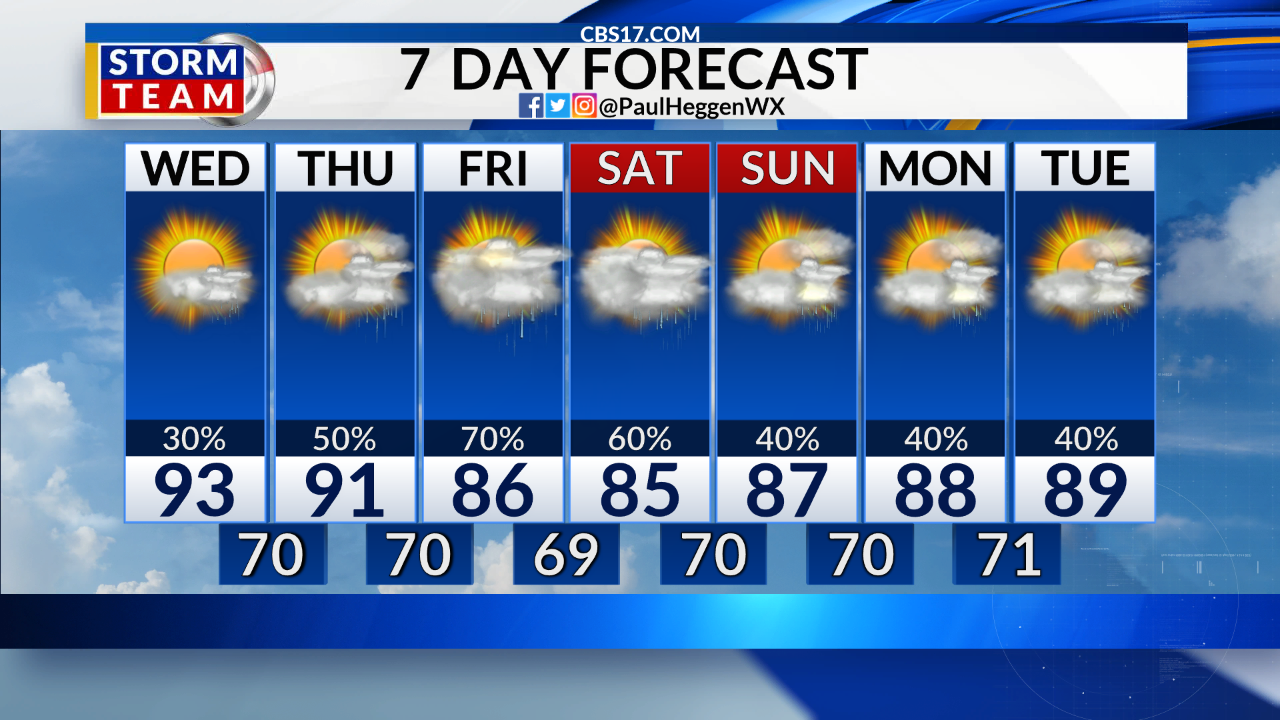 The big-picture weather pattern won’t change much through the middle of next week, so I’m leaving our rain chances pretty high, but just below 50-50. Total rainfall amounts will steadily add up — the Weather Prediction Center indicates 2″+ for the northern half of central North Carolina: 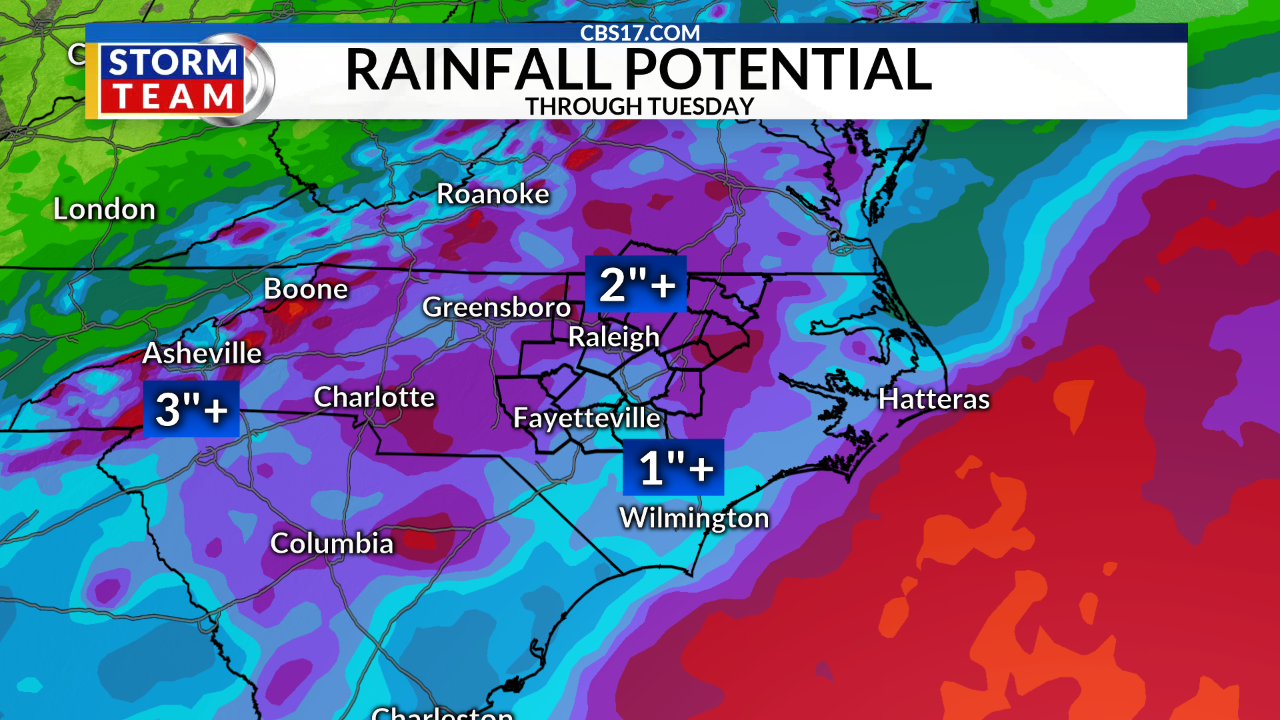 We can’t be too confident in the day-by-day chances that far down the line in the forecast, so stay tuned for updates!

We continue to monitor two possible areas of development in the tropics as well. The one that’s closer to us is a disorganized cluster of showers and storms just north of the Dominican Republic. It has a low chance of getting its act together — the National Hurricane Center estimates just a 10% chance over the next 5 days: 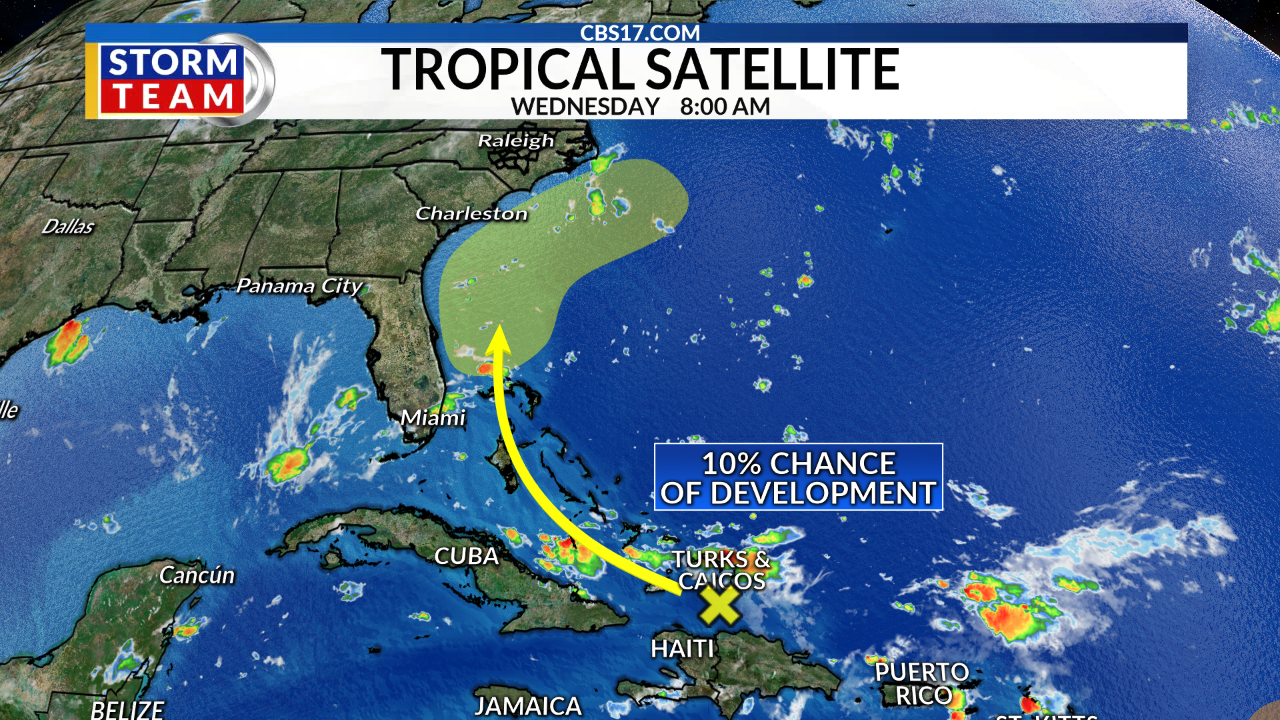 Even if it organizes into a tropical depression or tropical storm, it’s likely to curve away from the U.S. coast. I continue to be unimpressed and unconcerned overall, but we’ll keep an eye on it just in case.

The second tropical “something” has greater potential for long-term development. It’s way out there in the Atlantic, and won’t develop much over the next 72 hours…after that, the NHC estimates a 50% chance it becomes at least a tropical depression: 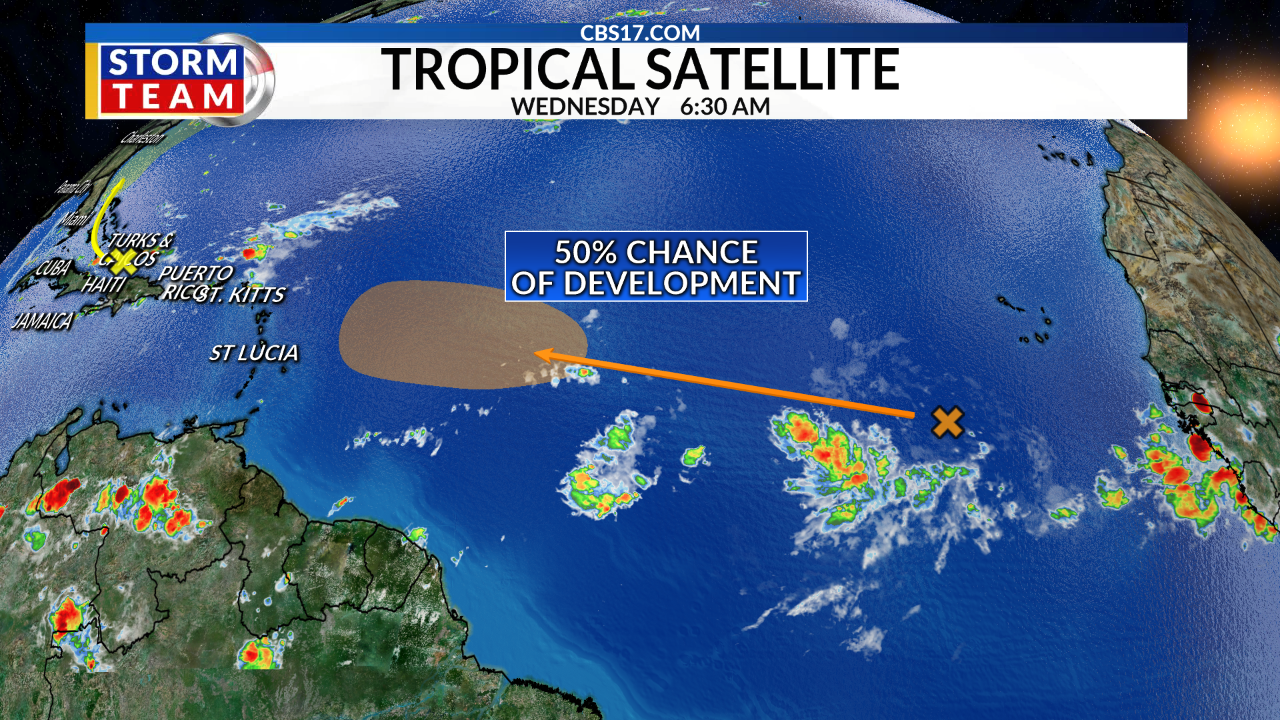 The European model’s ensemble is even more impressed, showing a whopping 90% chance that we’re looking at a tropical depression by the end of the weekend:

And the same set of models shows a 50% chance it becomes Tropical Storm Chantal by the middle of next week:

After that, things get really speculative. The most-likely scenario — regardless of the system’s strength — is that it would also curve away from the U.S. coast. The “spaghettios” plot from the European ensemble lets us look at each individual member of the ensemble, and see where they send the storm (if it even exists). The animation shows the trend away from the U.S. coast…but keep in mind, we’re looking FAR into the future in forecasting terms:

It’s something we’ll watch carefully over the next several days, but it’s nothing you should worry about or even think too much about at this point.

TAMPA, Fla. (WFLA) -- Those living in the southeast know the Atlantic hurricane season runs every year from June 1 through Nov. 30, but that could change in coming years as federal weather officials look to potentially start future hurricane seasons even earlier.

Dennis Feltgen with the NOAA says there have been discussions about potentially moving the start of the hurricane season to May 15 instead of June 1. The idea was talked about at the NOAA Hurricane Conference in December.

CHICAGO (NewsNation Now) — Millions of Americans endured another frigid day without electricity or heat in the aftermath of a deadly winter storm as utility crews raced to restore power before another blast of snow and ice sowed more chaos in places least equipped to deal with it.

More than 500,000 customers around the U.S. were still without electricity early Friday morning, and millions in Texas were without safe water service. The extreme weather has been blamed for at least 49 deaths, wreaked havoc on some states' power grids and utilities, jeopardized drinking water systems, and delayed vaccine shipments across the country.

WASHINGTON (AP) — Deadly weather will be hitting the U.S. more often, and America had better get better at dealing with it, experts said as Texas and other states battled winter storms that blew past the worst-case planning of utilities, governments and millions of shivering citizens.

This week's storms — with more still heading east — fit a pattern of worsening extremes under climate change and demonstrate anew that local, state and federal officials have failed to do nearly enough to prepare for greater and more dangerous weather.

Thai marchers link their democracy cause to Myanmar protests

Slain officer remembered as a hero; suspect fired gunshots after refusing to leave over mask rules

17-year-old girl said man offered to drive her home, but raped her instead, SC police say