A significant severe weather threat will develop over central North Carolina late this afternoon and this evening…until then, it will just be HOT. Highs will reach the low to mid 90s this afternoon: 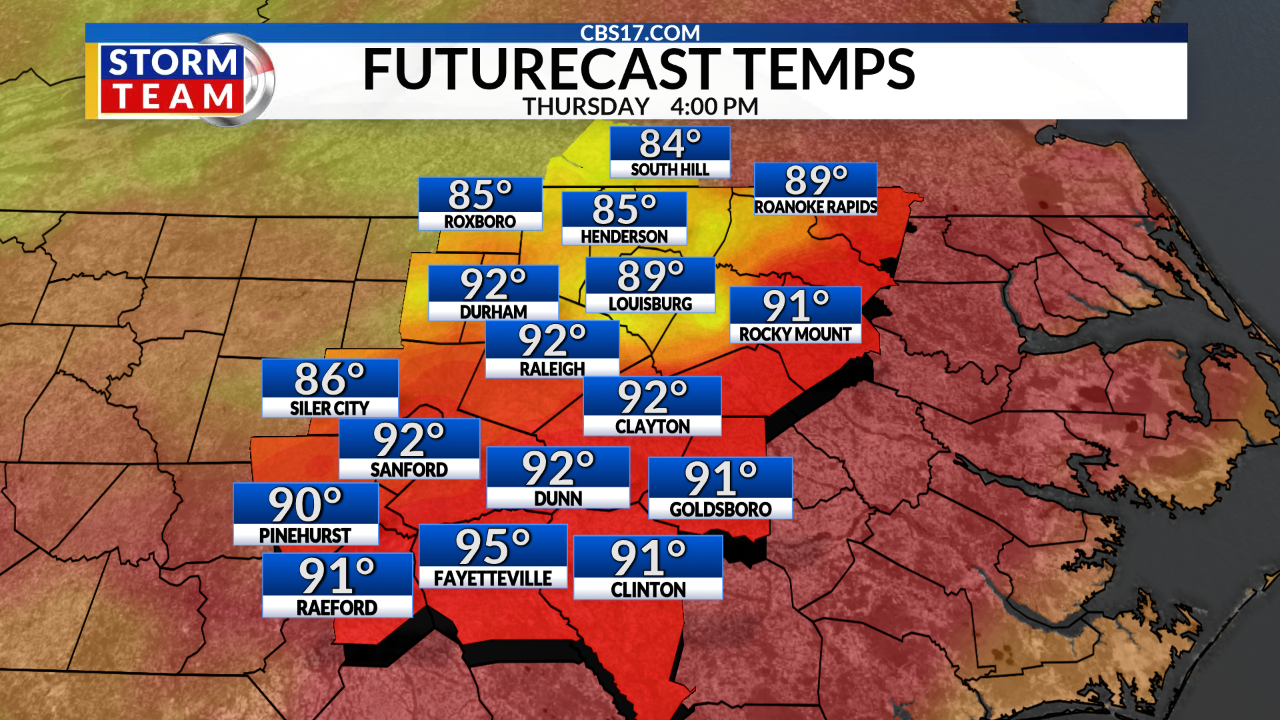 The substantial humidity will make it feel like close to 100°: 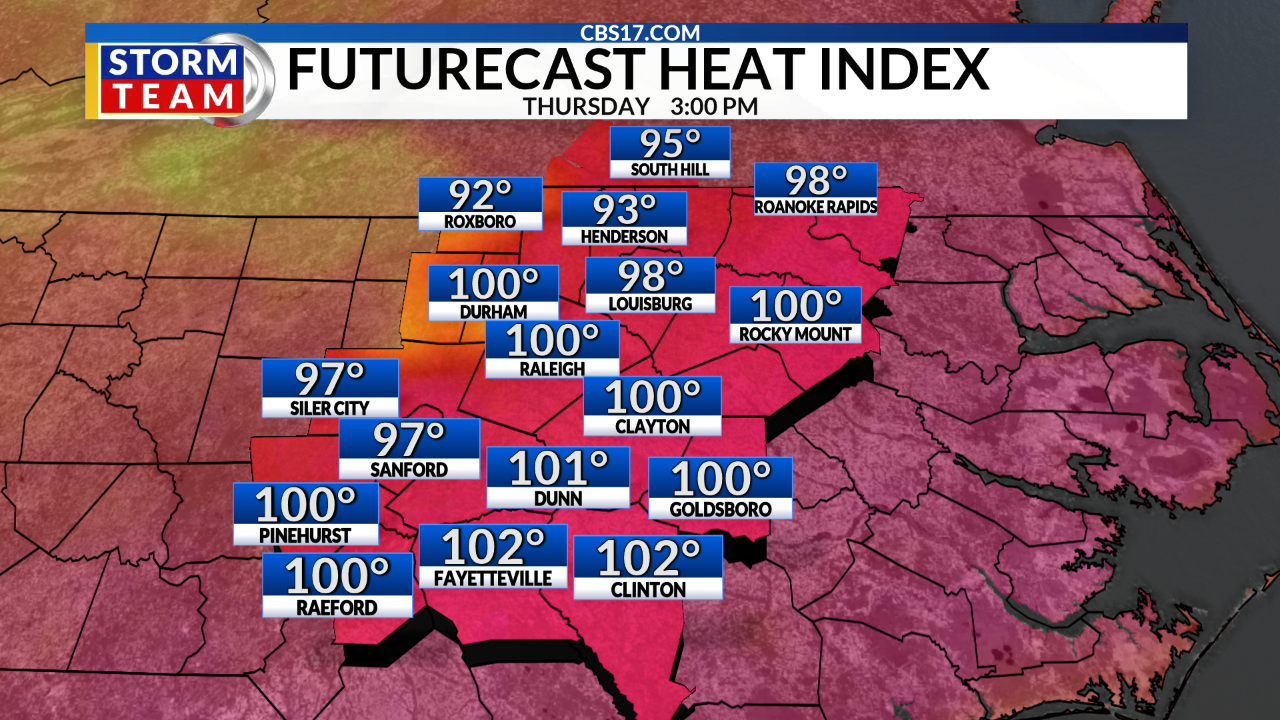 The heat and humidity will help destabilize the atmosphere overhead, but that’s almost always the case this time of year. The difference today is the presence of the other ingredients on our severe weather “recipe card”: 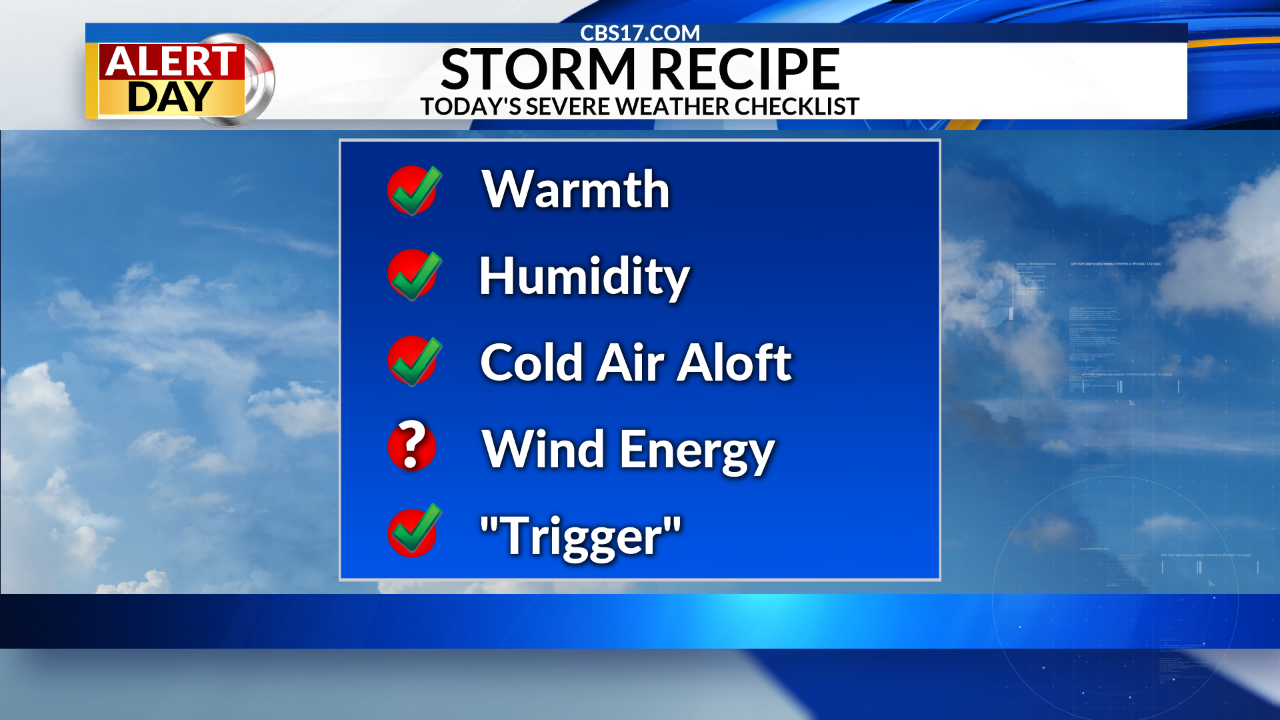 The only questionable ingredient is the level of wind energy in the atmosphere as the storms move in. But we’re still trying to figure out how the storms are going to evolve. The HRRR model’s radar simulation from 11:00am through 11:00pm shows two batches of storms — one moving through the northern half of central North Carolina by late afternoon, another heading in this evening:

While the North American Model also shows two clusters of storms, it shows a more-powerful Round One, which then pushes Round Two farther to the south:

Keep in mind, the radar won’t look exactly like either of those simulations. We use those forecast models for guidance, not as gospel…but at least the pattern does give us a good idea of the overall timing.

The Storm Prediction Center has included ALL of central North Carolina in an “Enhanced Risk” (level 3 of 5) for severe weather: 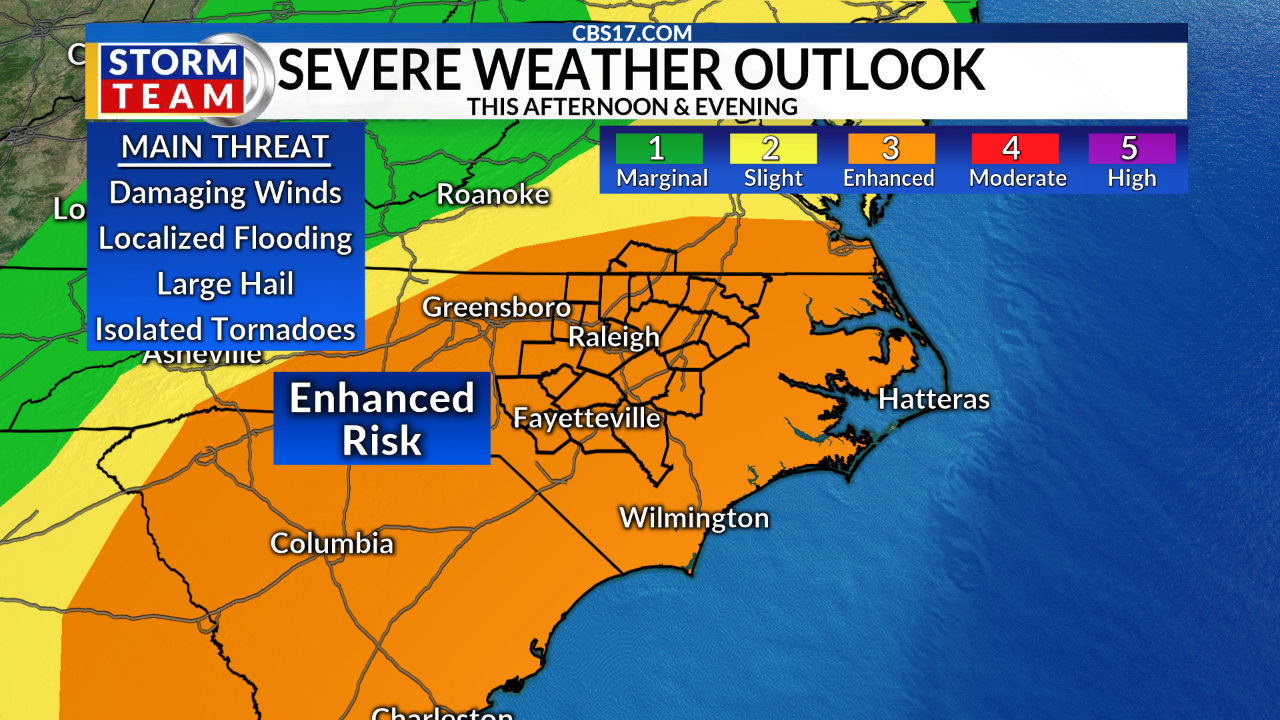 Damaging straight-line winds are the primary threat, with large hail and localized flash flooding next on the list. I can’t rule out an isolated tornado spinning up either, but that threat looks low overall: 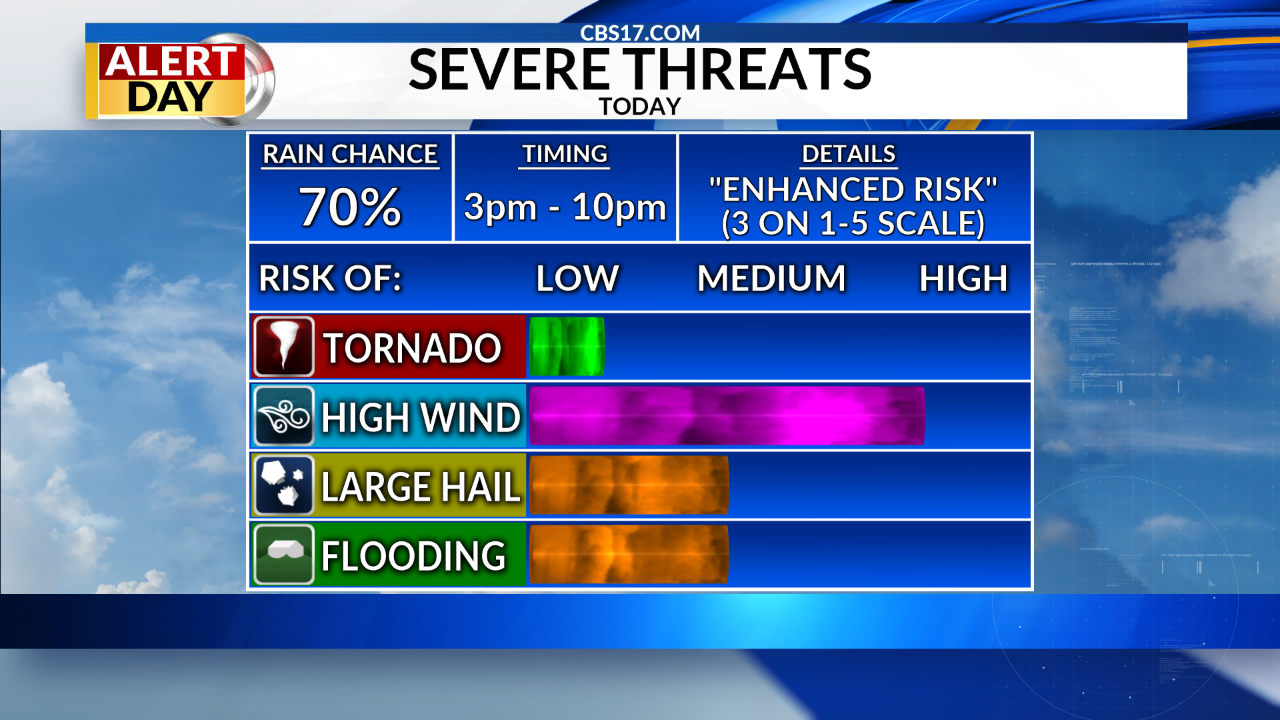 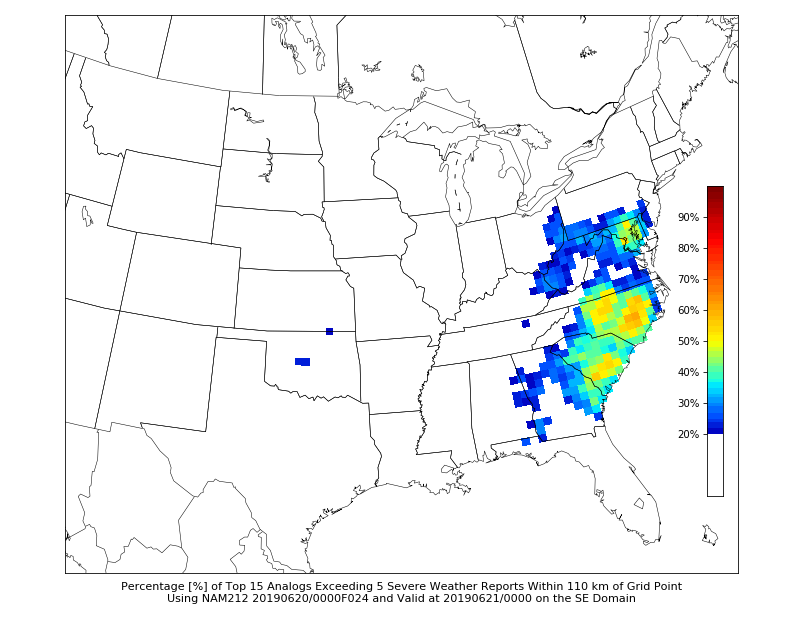 All of that sounds a little scary — but there are always complicating factors, because the atmosphere is…well, complicated. Maybe the afternoon storms move in before the wind energy is set up to organize them…maybe those storms spread out some rain-cooled air to stabilize things before the second batch moves in…maybe the forecast models are just over-estimating the already-borderline wind energy…maybe the “trigger” will be too weak to even get the storms started in the first place…you get the idea.

So just plan on staying weather-aware from mid-afternoon through this evening. I’ll be posting updates on social media throughout the day, and if any warnings are issued, we’ll pass them along right away. Remember, Twitter is the platform to rely on for minute-by-minute information like severe weather alerts…Facebook is next to useless, unless you want to see the warnings 24 hours after the fact. All warnings for central North Carolina are automatically posted to my Twitter feed, and I’ll be doing additional analysis there as the storms move through.

The storms will be out of here by midnight, and Friday is looking pretty good! Temperatures will start off in the upper 60s and low 70s: 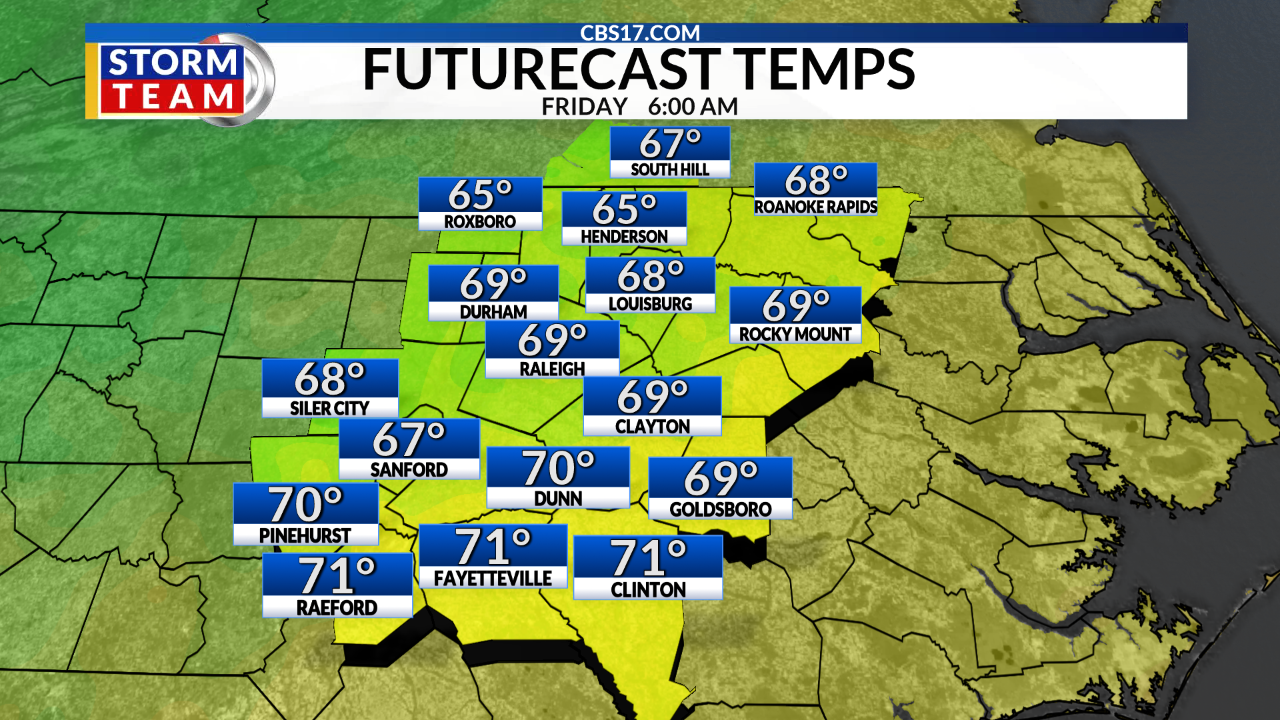 We’ll only warm up to the mid to upper 80s, with a few spots in our southern counties sneaking up to around 90°: 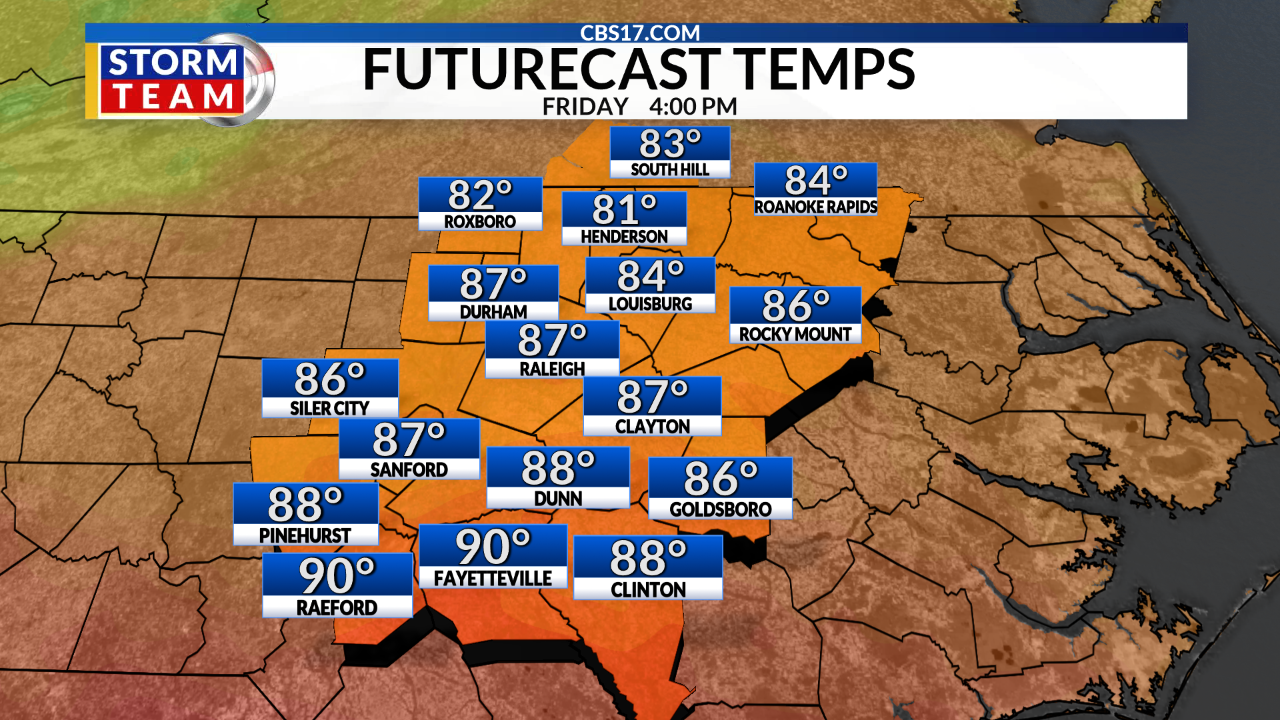 The humidity will be noticeably lower, although it won’t drop for long.

Warm and muggy air will be with us over the weekend, and we’ve had to bump up the rain chances a little bit. Some of the forecast data (including the usually-reliable European model) are showing some showers and storms trying to make a run towards us from the northwest. This is that model’s simulation from 10:00am Saturday through 10:00am Sunday:

I’m not getting carried away with the weekend rain chances just yet, because that’s a notoriously fickle weather pattern to try to pin down. Neither Saturday or Sunday are looking like a washout, just build in some flexibility to your outdoor plans! 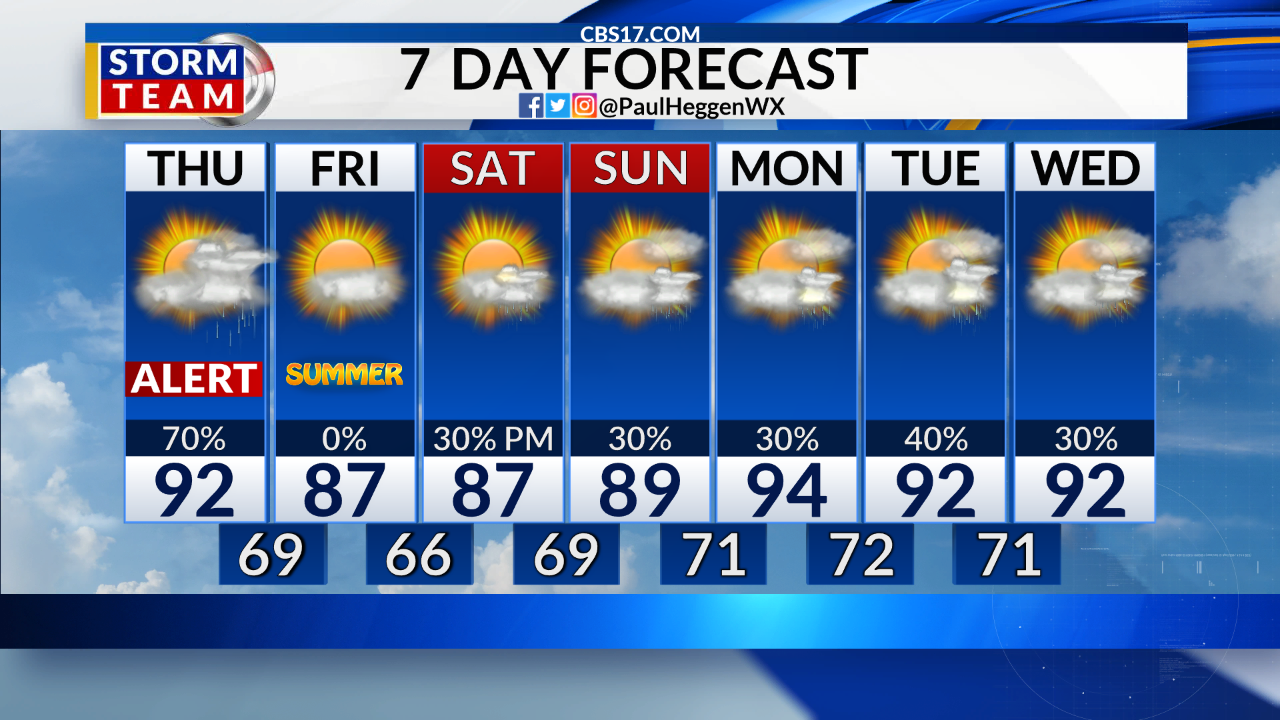 The Atlantic’s record-breaking “crazy” hurricane season got a bizarre European remake Friday as forecasters ran out of traditional names and trotted out the Greek alphabet for subtropical storm Alpha. And it was misplaced geographically, bearing down on Portugal.

This is only the second time National Hurricane Center forecasters have had to pull out the Greek alphabet for names, with the last time being 2005. Tropical Storm Wilfred, the last of traditional names, officially formed little more than an hour before Alpha, prompting the hurricane center to tweet “get out the Greek alphabet.”

Wilfred is forecast to remain a tropical storm with some slight strengthening before weakening back to a depression next week, the National Hurricane Center said Friday.

TAMPA, Fla. (WFLA) -- The hyperactive hurricane season continues with forecasters watching a number of systems in the Atlantic Basin on Friday morning.

Hacking, cyberbulling continues for Wilson 11-year-old despite efforts to stop it

CDC reverses course, says people without symptoms should be tested

Puerto Rico getting funds for power grid 3 years after Maria

USDA plans additional $14B for farmers reeling from virus

Despair in Lebanon pushing some to flee to Europe in boats

‘We are slammed’: Veterinarian clinics, animal hospitals busier during pandemic

Father of 2-year-old shot in Fayetteville was shot to death in May 2019, police say

Kicked out of a Cary business for wearing scrubs? A local healthcare worker responds