11PM WEDNESDAY UPDATE: The system in the Gulf of Mexico continued to get better organized late Wednesday night, but it’s still not a tropical depression. Potential Tropical Cyclone Two has a broad circulation, but not enough to be classified as a tropical depression or storm. Despite the name it is still expected to bring large amounts of rain to the Louisiana coast this weekend.

More than 20″ of rain is possible in some parts of Louisiana, thanks in part to a forecast very slow movement. The forecast intensity could bring a Category 1 hurricane ashore in south Louisiana sometime Saturday, but the path and intensity remain very uncertain simply because the system hasn’t formed yet.

11:00AM UPDATE: The National Hurricane Center has started issuing advisories on “Potential Tropical Cyclone Two”. Quite a mouthful, but that’s what this system is until the Hurricane Hunter aircraft gets out there to evaluate if a Tropical Depression has formed.

The NHC’s first forecast for this system shows it becoming a tropical storm tomorrow, and a Category One hurricane by the time it makes landfall between Lafayette and Lake Charles in Louisiana:

That intensity is toward the high end of forecast model data, as you’ll see in this morning’s original post just below. The placement of the “centerline” within the cone does agree with what I wrote early this morning, that a westward jog was more likely. We’ll be updating the forecast path on social media today and tonight, and I’ll have another blog post to dive into the latest data Thursday morning.

————————
As of 8:00am Wednesday, it’s still a potential tropical system that we’re talking about this week, since it has yet to be officially classified as a tropical depression by the National Hurricane Center. That’s LIKELY to change over the next 24 hours — I talked about this disturbance on the air this morning (video above), but the Weather Blog gives us a chance to really dive into the details. Here we go…

The atmospheric “ripple” we’ve been tracking for the past few days finally drifted southward into the Gulf of Mexico over the last 24 hours. The National Hurricane Center now estimates a 90% chance that it becomes at least a tropical depression over the next 48 hours: 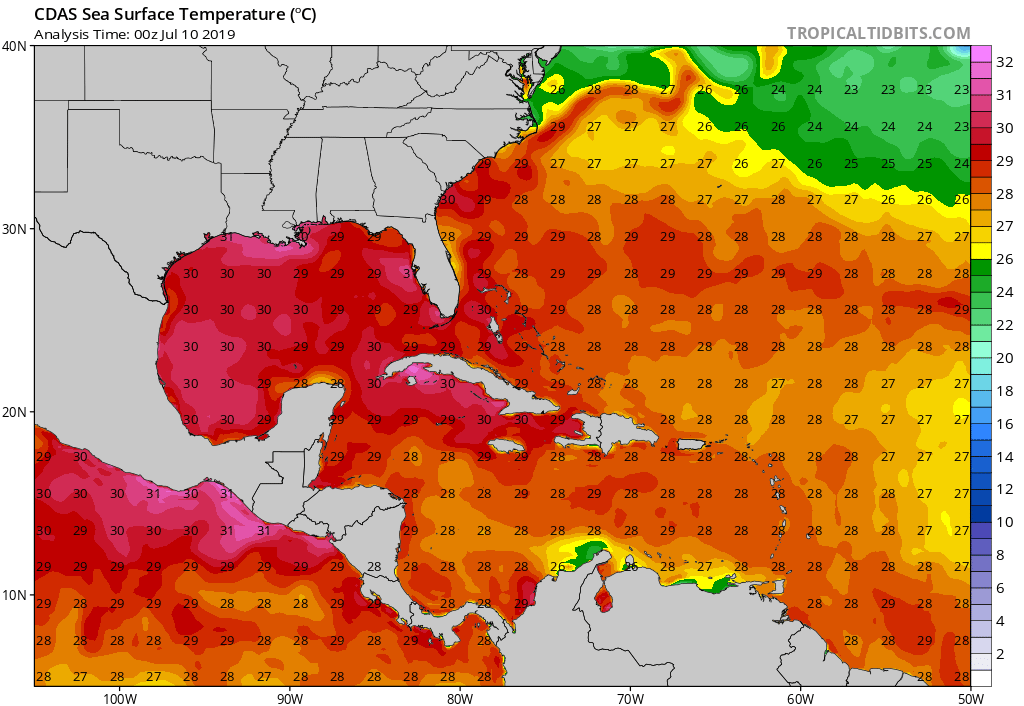 There’s plenty of warm water along the potential path of this system as well. Water temperatures are above-average throughout the Gulf of Mexico, even for early July: 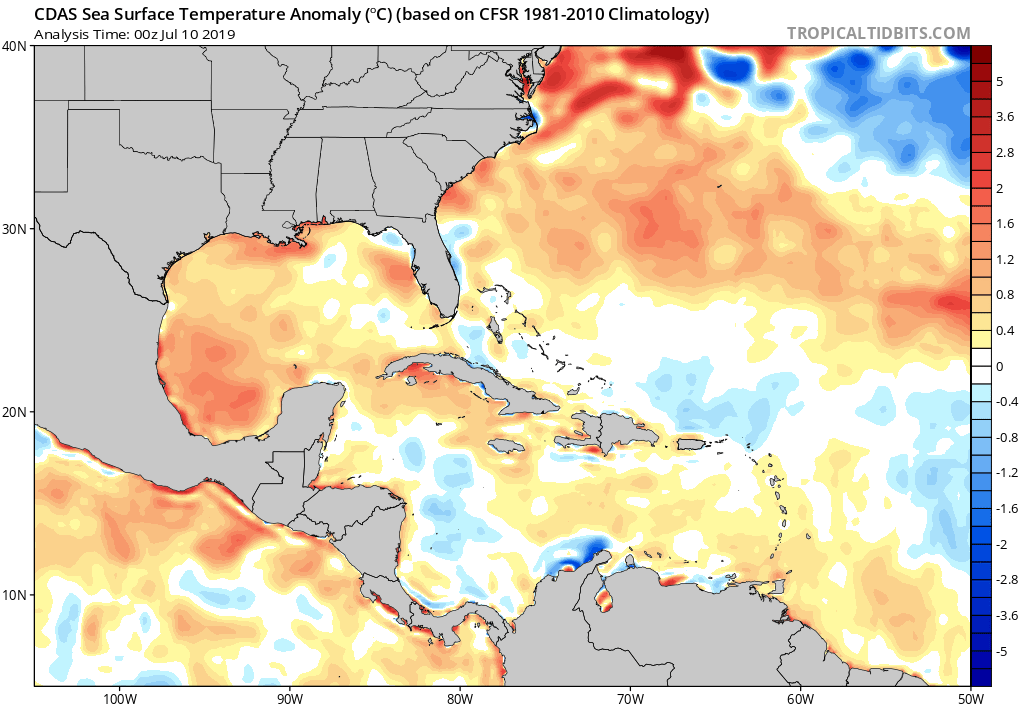 The other key factor is wind shear — basically, will strong upper-level winds tear apart the developing storm? In this case, wind shear over the Gulf is very low. It has increased slightly since yesterday, but it still won’t be much of a limiting factor:

The model data is in better agreement compared to 24 hours ago, but there’s still plenty of uncertainty, especially late this week. The latest “spaghetti plot” of the various forecast models shows rough agreement that the developing storm will move to the west-southwest, then turn north toward the Gulf Coast: 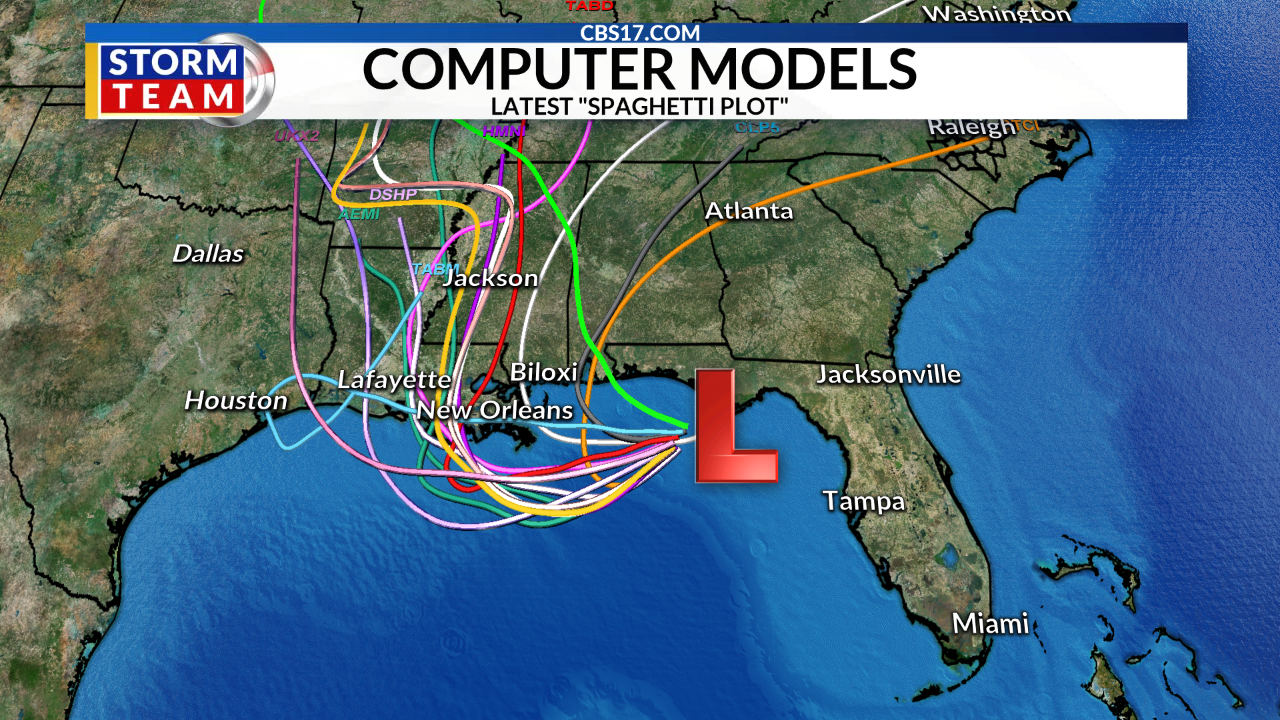 The European forecast model has been the most-accurate with this system so far…but instead of that one model, we’ll look at its “ensemble” — that’s a forecast model run dozens of times with slightly different variables. That gives us a range of the most-likely and least-likely outcomes. The European model’s ensemble output is…troubling. It shows the system tracking farther west before it makes that northward turn — more time over the Gulf results in a MUCH stronger system (the red L’s are each ensemble member’s version of the center of circulation):

The European ensemble estimates a 95%+ chance that the system becomes Tropical Storm Barry:

The chances that it becomes a hurricane are higher compared to yesterday’s data — the ensemble now shows a 20-25% chance it reaches hurricane strength before making landfall near the Sabine River (which marks the border between Louisiana and Texas):

That’s a little farther west than most of the models on the spaghetti plot, but I’m not in the habit of betting against this particular model.

Regardless of how strong the winds are, or where it specifically makes landfall, this is going to be a big ol’ rainmaker along the Gulf Coast. The Weather Prediction Center’s 7-day rainfall forecast shows the potential for over a FOOT of rain within a hundred miles of either side of where the storm makes landfall:

Right now that “bullseye” is close to the model-consensus point of landfall, but I’d bet it shifts westward over the next few days. It’s certainly enough to cause a significant flooding threat — and just to emphasize, that rain threat is independent of the storm’s classification as a depression, tropical storm or hurricane.

It’s unlikely that this system will directly impact central North Carolina’s weather through early next week. Eventually what’s left of it will get caught up in the west-to-east atmospheric flow across the country, and eventually that will help to enhance our rain chances. That probably won’t happen until late next week, and that’s an eternity of time in forecasting terms.

If you have family or friends along the Gulf Coast, make sure they’re staying weather-aware over the next several days as the forecast evolves. We’ll be here keep an eye on it!

Fire crews earlier responded to a report of live powerlines down on an occupied car along South Valley Road.

RAEFORD, N.C. (WNCN) -- The National Weather Service in Raleigh has reported an EF-1 tornado near Raeford in Hoke County.

Officials say maximum sustained winds of the storm were clocked at 100 miles per hours with a maximum path width of 200 yards.

Earlier this week we were talking about our first named storm of the season, Arthur. After yet another early start, the upcoming Atlantic Hurricane Season is looking active.

Both N.C. State and Colorado State are calling for an above-normal season. And NOAA forecasters are saying the same, with a 60 percent chance of an above-average season.

New Zealand leader carries on with TV interview during quake

Flooding seen in Cary, Raleigh after heavy thunderstorms pass through

1 dead, 8 wounded in 2 shootouts and 2 shootings in Charlotte in just 2 hours

Slowly, surely, US houses of worship emerge from lockdown

1 dead, 8 wounded in 2 shootouts and 2 shootings in Charlotte in just 2 hours