The weekend brought the hottest temperatures so far this summer to central North Carolina, and there’s more hot weather in store today. But today is the LAST day of the heat wave!

Temperatures will reach well into the 90s once again this afternoon: 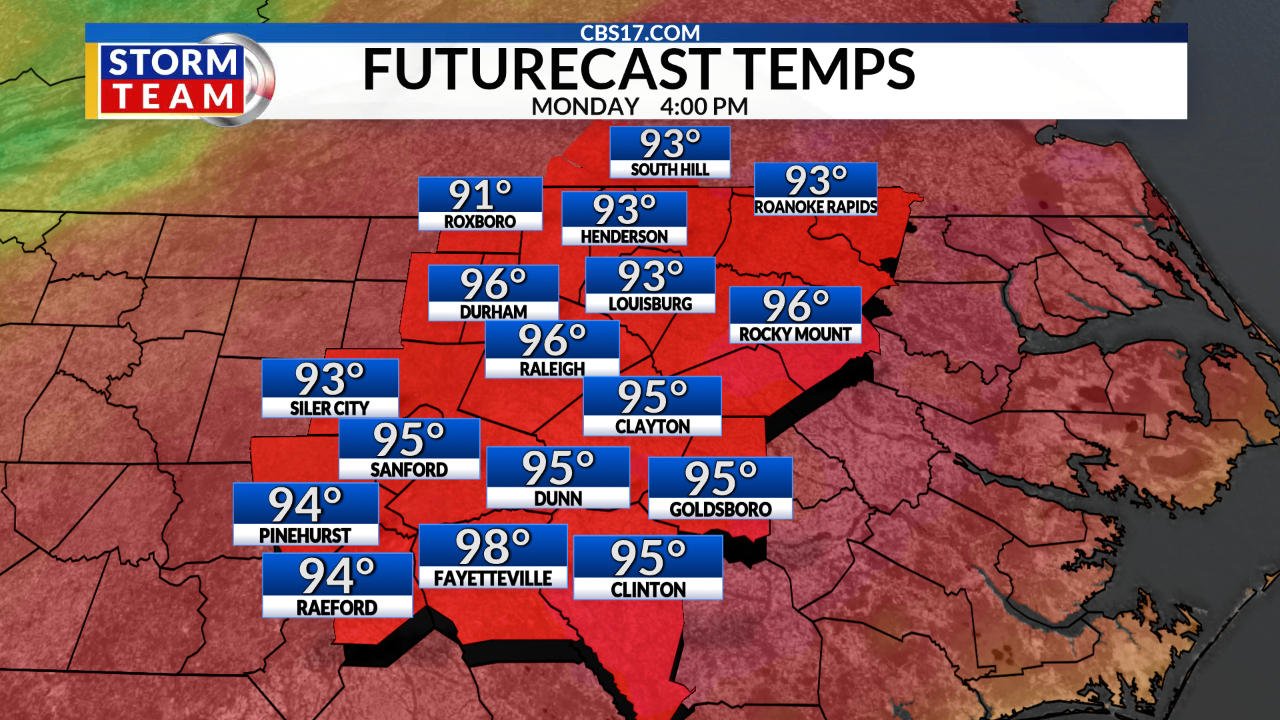 For the first time in over a week, we don’t have any Heat Advisories in effect — winds will be a little stronger, mixing around the atmosphere and keeping the heat index below 105° in most spots: 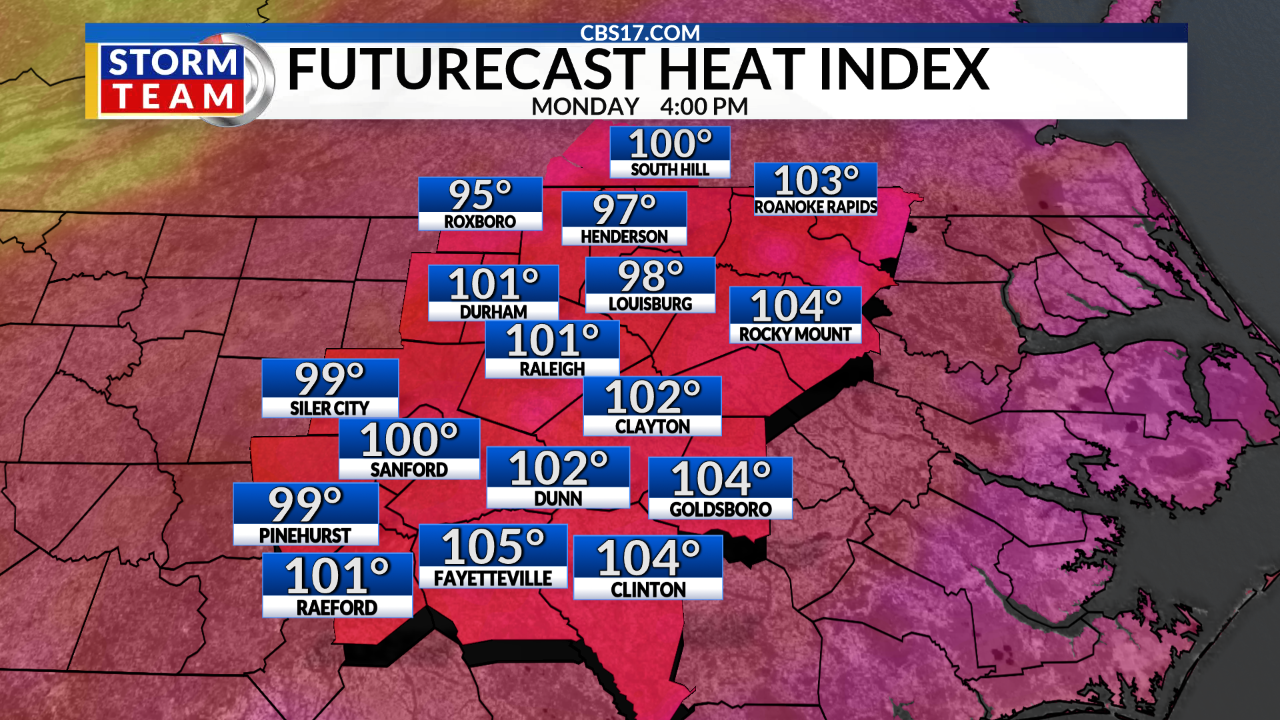 We’ll see a few spotty storms popping up in the heat and humidity, but the storms will be more “miss” than “hit” through sunset: 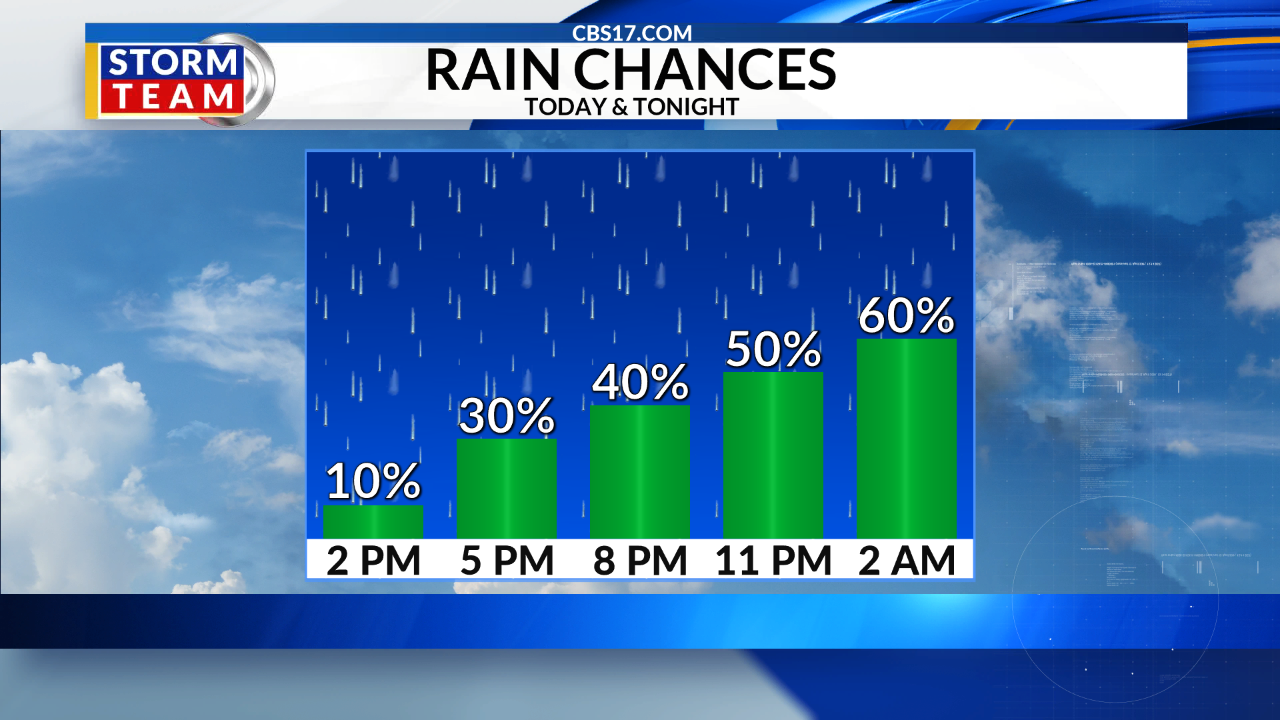 A better chance of storms moves in from the west/northwest late this evening and overnight. The North American Model’s radar simulation from noon today through 6:00am tomorrow shows the best chance overnight from the Triangle northward:

If you don’t get any rain tonight, don’t worry — we’ll see widespread thunderstorms re-developing by midday Tuesday. Those storms will progress to the south and east the rest of the day, with lingering showers still hanging on until the wee hours of Wednesday morning. Back to the North American Model’s simulation, this time from 6:00am Tuesday through 6:00am Wednesday:

Tomorrow’s temperature forecast is really tough to pin down — it depends not just on when the storms fire back up, but also on how much cloud cover lingers from any overnight rain. While temperatures in our northern counties will be stuck in the 70s, areas farther south will have enough time to heat up to the mid to upper 80s: 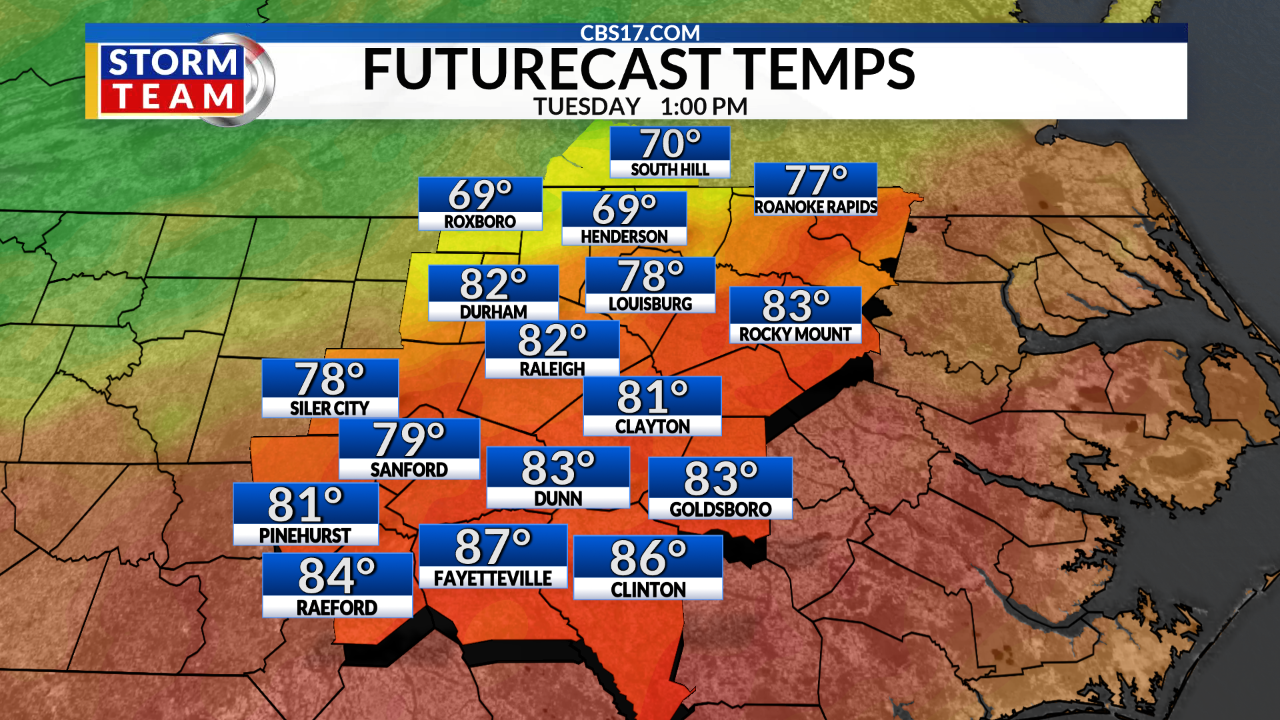 The Triangle is right in that middle ground…which means the forecast could easily tip in either direction. Where temperatures heat up more, your severe weather threat will be a little higher. The Storm Prediction Center has included areas east and south of the Triangle in a “Marginal Risk” (level 1 of 5) of severe weather: 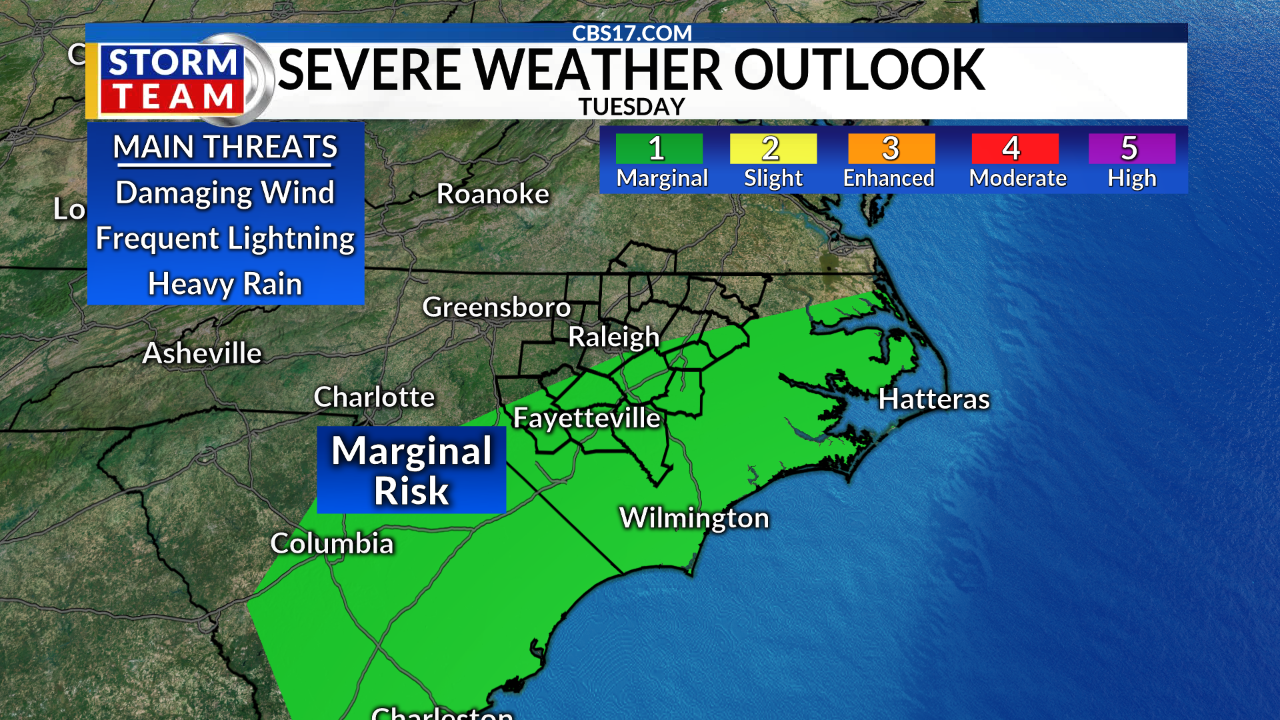 That’s the SPC’s lowest category, indicating that we don’t expect a severe weather outbreak. But the SPC’s own forecast model indicates a pretty good chance (50-50 or so) of storms with at least borderline severe characteristics:

So, I wouldn’t be surprised if that gets bumped up category to a “Slight Risk.” We’ll keep a close eye on it over the next 36 hours…

Here’s the really good news: after a couple of lingering showers quiet down early Wednesday, we get to enjoy a few days of below-average temperatures AND below-average humidity!

The mugginess won’t go away, but it should at least remain in the “tolerable” category Wednesday, Thursday and Friday…and maybe even into the weekend: 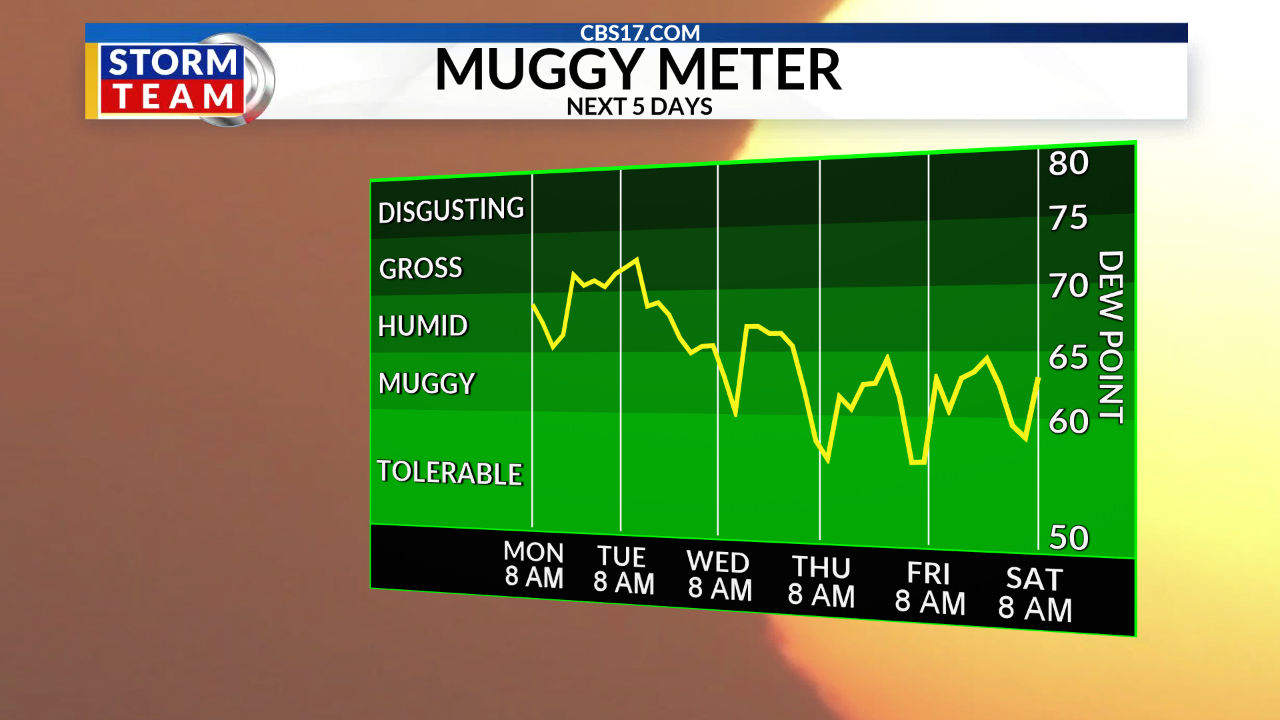 Temperatures will gradually heat up by the weekend, but at worst we’ll be back up to around 90° — and that’s exactly normal for late July: 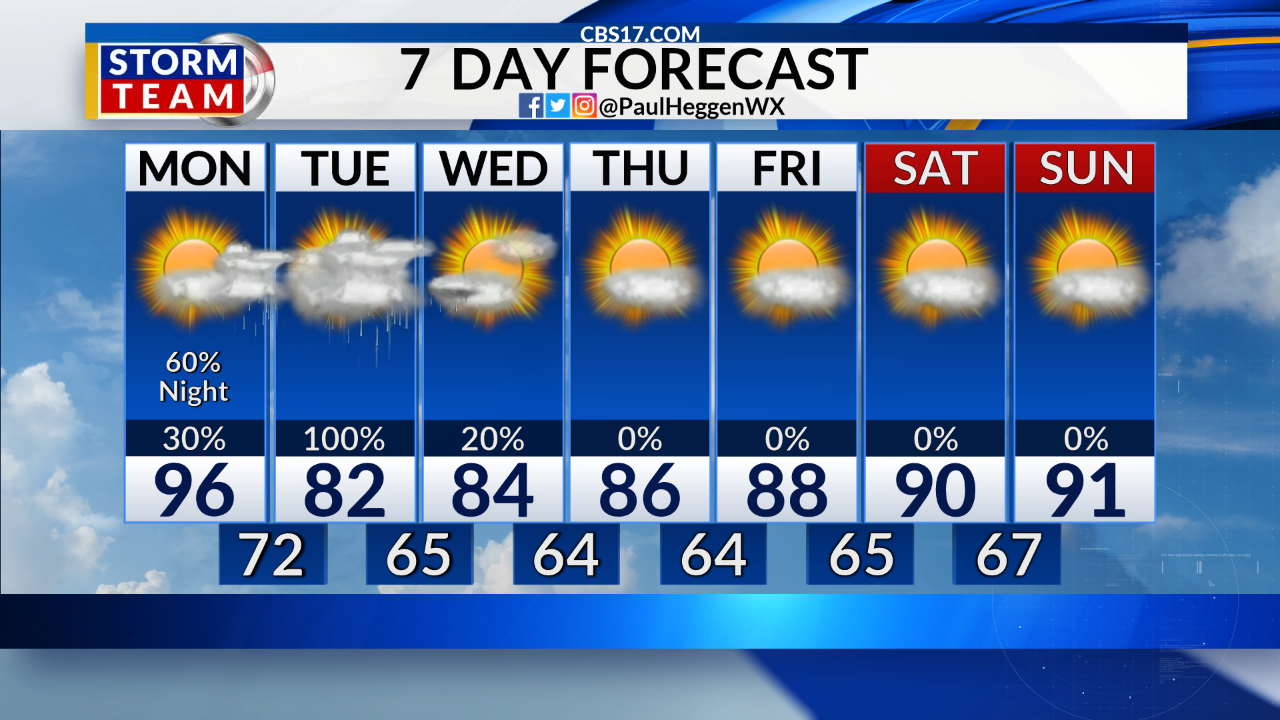 One last thing…we’re watching a potential tropical disturbance currently making its way through the Bahamas toward the Florida coast. The National Hurricane Center estimates a 30% chance that it becomes at least a tropical depression over the next five days as it curves north and runs parallel to the southeastern coast of the U.S.: 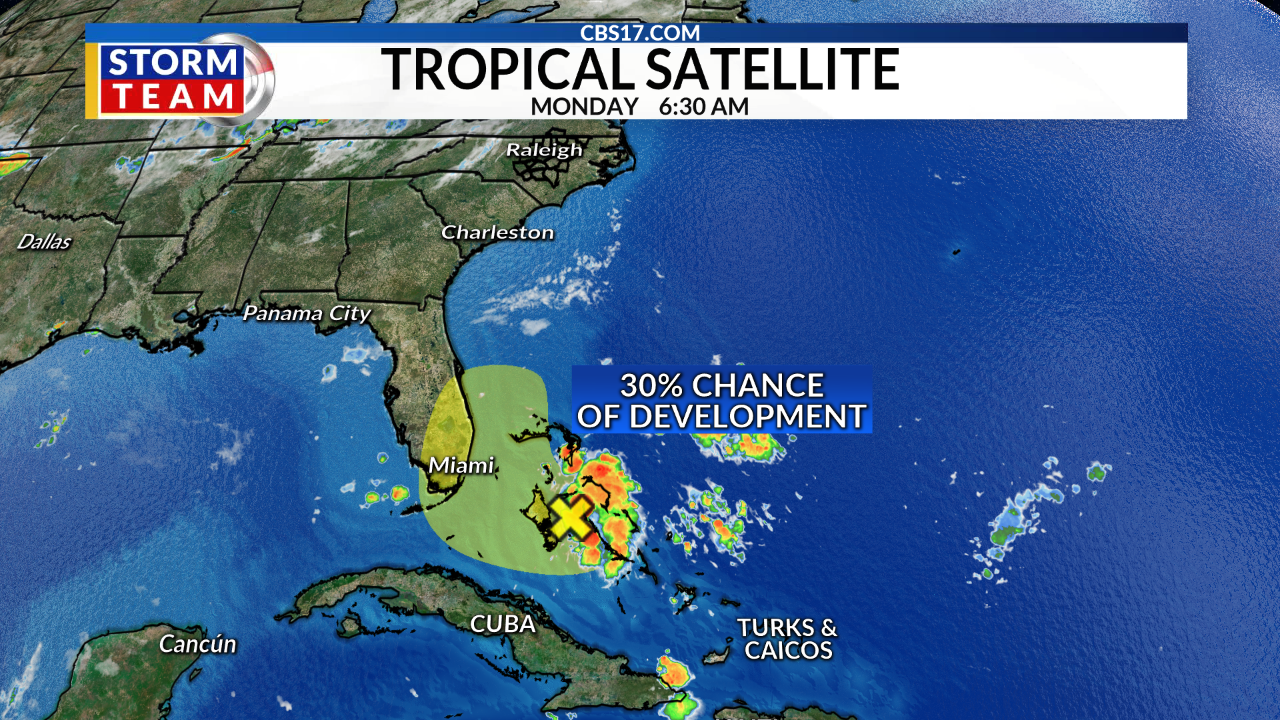 While that’s a little too close for comfort, the same cold front that sparks tomorrow’s storms will also help bulldoze this tropical disturbance farther offshore. We’ll keep a close eye on it, but I’m not concerned at this point.

Can the coronavirus travel more than 6 feet in the air?

Russia’s Navalny accuses Putin of being behind poisoning

Push to bring coronavirus vaccines to the poor faces trouble

The Latest: Rolls-Royce to sell shares as virus cuts travel

Hundreds of migrants set out from Honduras amid pandemic

Judge’s order leaves many visa lottery winners out of luck